The Genius Of… Orange Rhyming Dictionary by Jets to Brazil

Formed from the ashes of major label ‘sell-outs’ Jawbreaker and Handsome, Jets to Brazil rewrote the record with their thrilling debut. 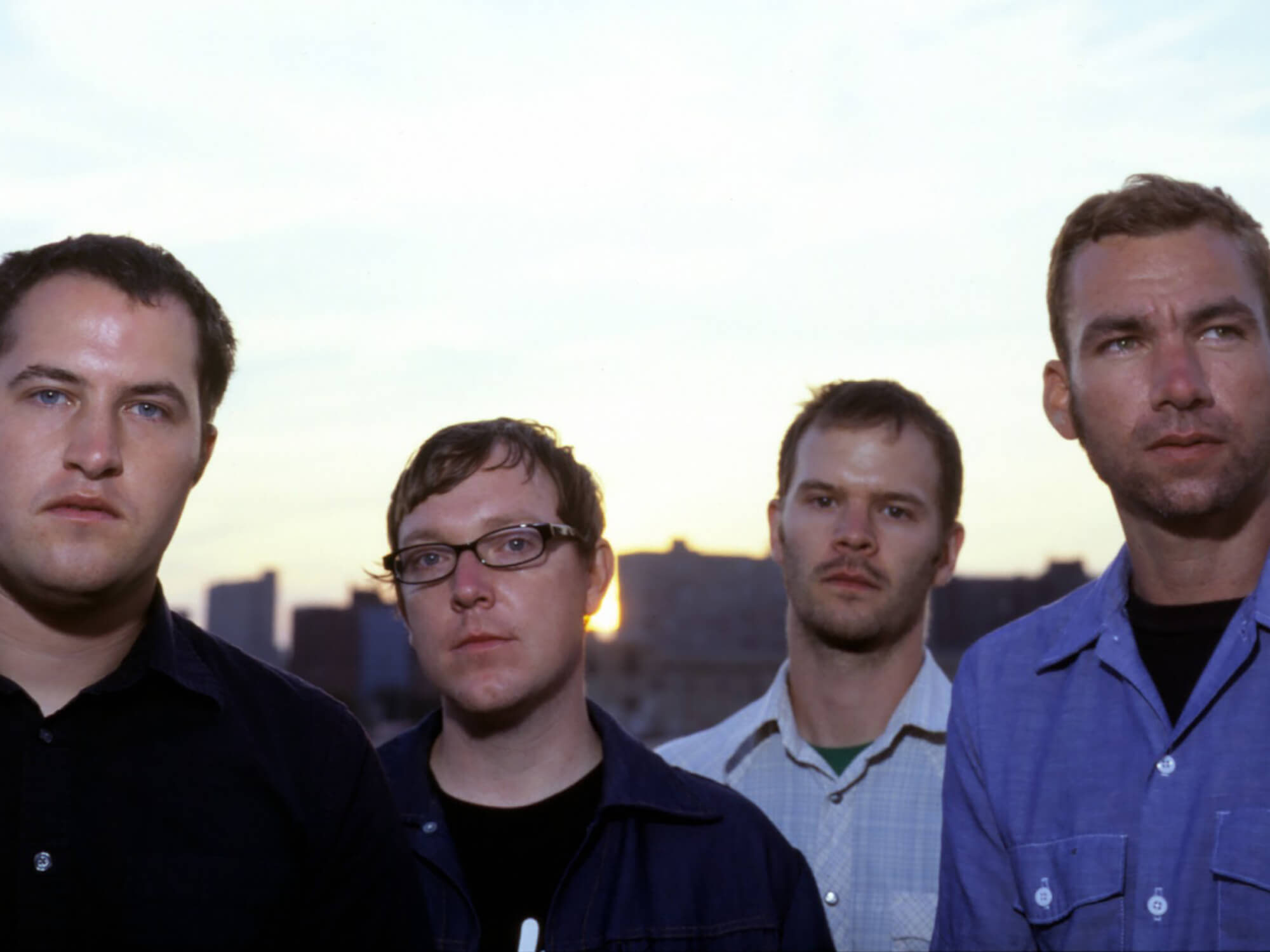 If you are of a certain vintage, the regular online clamour from fans and stans desperate for success to fall in the laps of their indie favourites will likely have struck an odd chord with you. Haven’t they heard of selling out? “Am I so out of touch?” you muse to yourself. “No, it’s the children who are wrong.”

You think back to the good old days of the mid-1990s, when signing to a major label was verboten and you were entirely justified in wishing failure and ruin on any band who chose to go down that route. Bands such as Jawbreaker. Especially Jawbreaker. “You’re not punk and I’m telling everyone,” they once sang – and no-one got the joke.

One of the most important and influential Bay Area punk bands, their excellent, slightly cleaner and more adventurous final LP Dear You was released by DGC in September 1995 and swallowed whole by the discourse surrounding it. “Dear You… eventually wound up on some nameless secondhand store’s shelf to inflict its half-life of misery on someone else,” ran a retrospective 2.3 Pitchfork review in 2004, and that writer used to like the record back in the day. This shit lingered and mutated.

Jawbreaker folded soon after the album’s release, and their charismatic punk-poet guitarist and vocalist Blake Schwarzenbach binned the whole being-in-a-band thing for a while, moving east and settling in Brooklyn, where he met Handsome vocalist Jeremy Chatelain through his girlfriend. They didn’t know it at the time but they had plenty in common.

Like Jawbreaker, Handsome had been chewed up and spat out by the major label machine. A post-hardcore meeting of minds featuring members of Helmet, Quicksand and Cro-Mags, their sole album is a monument to a sound that bands such as Far would take further into the public consciousness: dense, heavy, atmospheric guitars paired with emotionally intuitive vocals.

Chatelain and Schwarzenbach began working on new music, bringing in another bruised musician in Texas is the Reason drummer Chris Daly, whose own band had gone to the grave with a major label deal on the table. The songs came together quickly and bled beyond boundaries regularly, wilfully. Jets to Brazil’s first moves were part exorcism, part provocation, and people were desperate to hear them.

They recorded a demo early in 1998 and signed to Jade Tree before heading out on tour with Milwaukee emo heroes the Promise Ring. By the time they hit the studio to record an album proper, things were in place and humming along.

Orange Rhyming Dictionary was assembled in the summer of 1998 at Easley McCain Recording in Memphis, Tennessee – previously home to indie-rock luminaries Sonic Youth, Guided by Voices, Wilco and Pacer – with producer J Robbins, another punk who’d gone to the dark side by teaming with Atlantic to release Jawbox’s For Your Own Special Sweetheart in 1994. He, though, had found some manner of acceptance among the band’s faithful. “They cut us slack,” he told Dan Ozzi in the book Sellout. “But Jawbreaker fans did not cut them that same slack.”

“We all liked the idea of going out of town to record, to fully immerse ourselves in the making of this thing,” Schwarzenbach told Punk Rock Theory. “It was really a perfect arrangement – I can’t imagine that record happening anywhere else. The main room at Easley was so enchanting: lots of lamps, space and a piano. It just encouraged late-night experimentation as a space.” 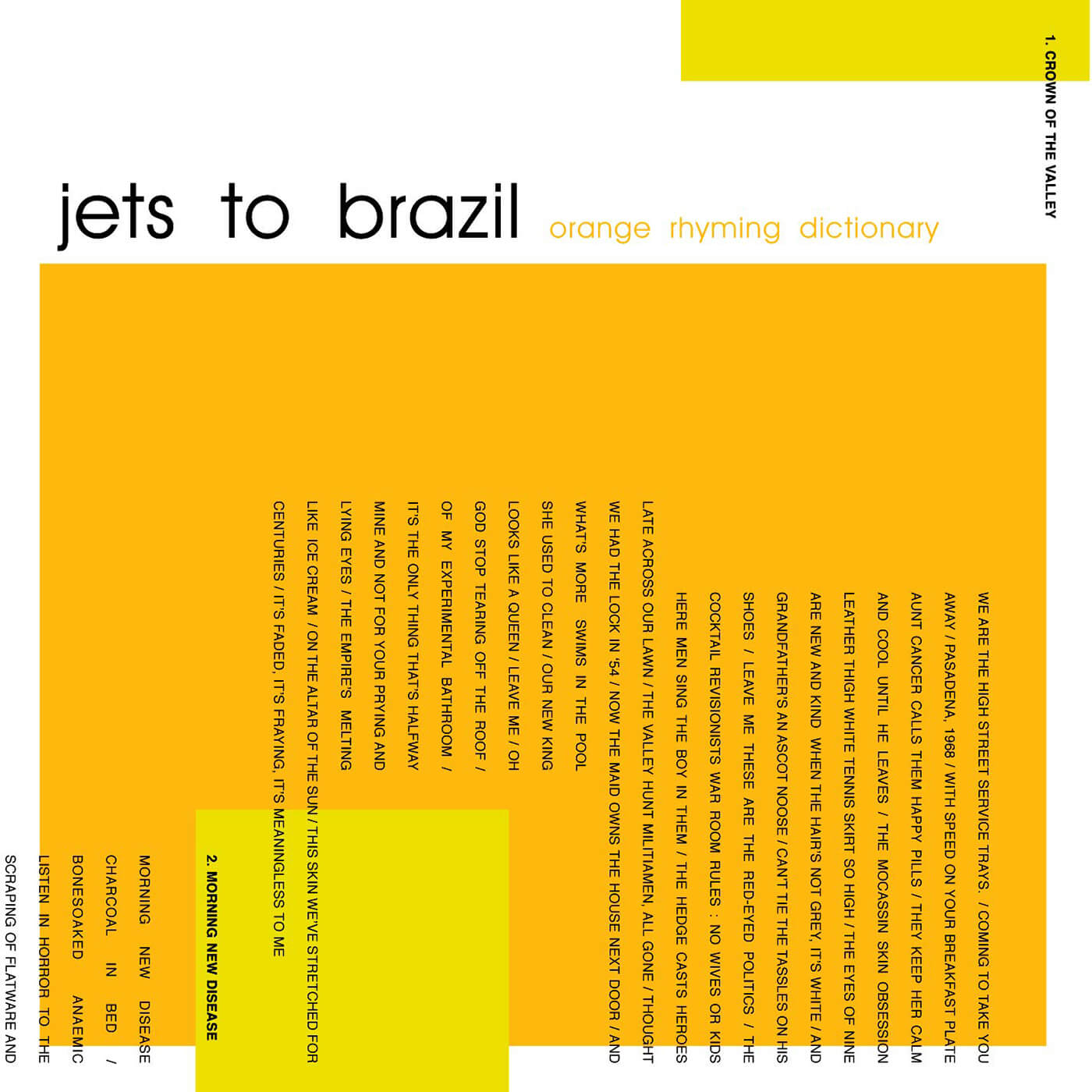 And now for something completely different

The first thing to note about Orange Rhyming Dictionary is how quickly it makes the furore around Dear You look silly. That made you want to spit in someone’s mouth/throw beer bottles at them/ban them from your venue? Wait ’til you get a load of this. Even Accident Prone, that record’s six minute centrepiece, didn’t have all this going on.

“We all lived together during that week in Memphis,” Chatelain told Punk Rock Theory. “We charted the record out and discussed the parts in detail. J attended rehearsals and made suggestions. He played a few guitar parts and sang some harmony. There are a few very J Robbins vocal harmonies on the record. He has a sound that is all his own.

“In general, he made all of us feel comfortable during the process of tracking our first record. He does this thing where he puts his palm on his forehead and asks, ‘Are you married to that part?’ He’s great, very diplomatic about the process. He helped us feel good about the outcome.”

Opener Crown of the Valley employs snaking lead lines, octave riffs, playful wah and surging drops built around Schwarzenbach’s use of open strings. A left-handed player most commonly associated with a series of Les Pauls and a JCM800, Schwarzenbach’s meticulous style meshes with Robbins’ off-kilter framing, creating a multi-tracked latticework of guitars that is only amped up by the explosive Morning New Disease, which “seems like the ur-Jets track” according to its writer.

But there’s also an appreciation for space and pacing, something felt most keenly on the spare, affecting Sea Anemone. With a guitar line only a step removed from alt-country, the song hangs in the air at the album’s midpoint, using only a few motifs across its five minutes and making the jumbles on either side feel all the more pointed, excited and bristling with ideas.

According to Jade Tree boss Darren Walters, Orange Rhyming Dictionary became the label’s biggest-selling release. Jets to Brazil subsequently added Van Pelt guitarist Brian Maryansky to the line-up, allowing Schwarzenbach to play keys more often, and toured regularly and without ego, appearing all over the place like any other punk band earning their stripes.

Their two later records, 2000’s Four Cornered Night and 2002’s Perfecting Loneliness, went further and deeper into melody, stately keys and rock bombast. They are quite lovely but don’t feel as alive as the band’s opening statement.

Twenty years later, Jawbreaker have done the unthinkable and reformed, Chatelain has served time playing the heaviest of low ends in Helmet, and Jets to Brazil’s music can be viewed free from ties and expectations. They were a great band – different to some other great bands that came before and afterwards but great all the same.