Overdrive, delay, an MP3 input and the noise of a mighty three watts, all for the price of – well, frankly, fifty quid. 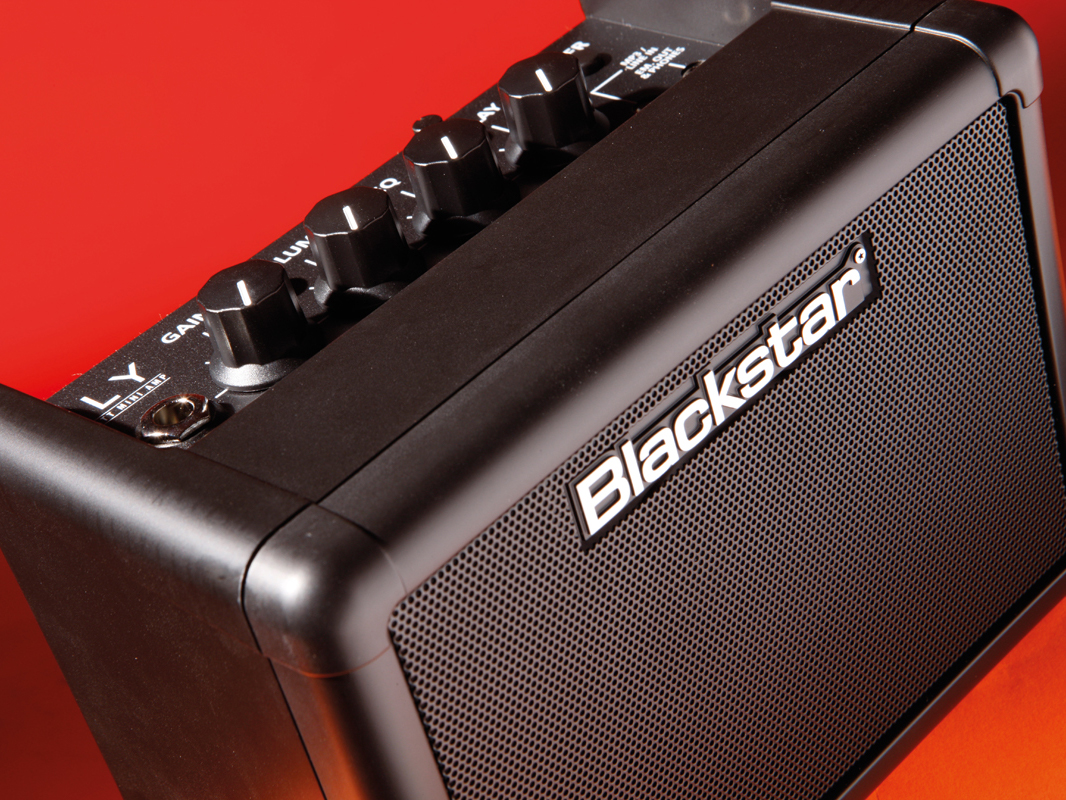 A few months ago we reviewed the Blackstar ID:Core Stereo 40 practice combo, and marvelled at how tiny and lightweight it was. Well, to adapt a phrase from Crocodile Dundee, that’s not a small amp… this is a small amp. The Fly 3 is not as titchy as an actual fly, but there are certainly moths with bigger wingspans than this 7″ box.

Like its ID:Core big brothers, this three-watter does not have a standard guitar speaker: its 3″ driver is described as ‘full-range’, and the reason for that choice is that the Fly’s auxiliary input is more than just an afterthought for the occasional jam-along-with-Jimi session. This product is aimed at guitarists who are likely to spend as much time playing along with records as they do in solo strumming mode.

This brings both of its two stereo mini-jack sockets into play. The input allows you to connect a smartphone, laptop, tablet or, if you’re old-school, MP3 player (tragic as it seems, having a dedicated MP3 player is now old-school); and the headphone output will place your guitar signal in the centre of a full stereo field.

The hi-fi capabilities go further than that if you’re willing to delve a little deeper into your wallet and invest in the Fly 3 Stereo Pack, which adds a second speaker plus a power adapter for £30 more. Now you’re not so much plugging an auxiliary sound source into a guitar amp as plugging a guitar into a stereo music system.

But hey, this is Guitar & Bass, not What Hi-Fi?, so let’s focus on the unit’s twang-plank functions. There’s not a lot of room for controls on that top panel – in fact there’s not even room for the word ‘Blackstar’, so they’ve just put ‘Black’ and a picture of a star. 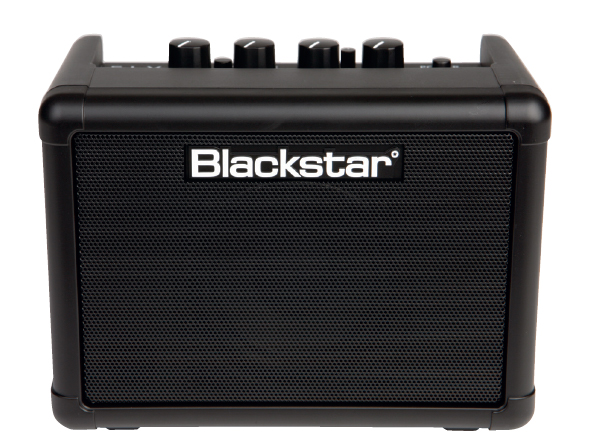 Fair enough. More importantly, there are separate controls for preamp Gain and master Volume, with a little button marked ‘OD’ between the two. As you might have guessed, this engages the overdrive circuit and turns the Fly 3 into a two-channel rock machine.

You’ll notice that the EQ control says ‘ISF’ underneath. Yes, we’re dealing with Blackstar’s popular ‘infinite shape feature’, with American-style clarity at one end and a darker, more British voice at the other. It’s evidently been decided that the ability to pick your spot anywhere along that Atlantic-straddling line is more important than traditional treble-filtering.

Finally, there’s a mini-knob for Delay level and a full-size control for Delay time. Turning the level to zero switches the effect off, as you’d hope, and Blackstar has done away with the need for a separate feedback control by linking the number of repeats to the delay time. You’re not getting the versatility of a proper delay pedal, then – but if you expect that in a £50 amp, you need to take yourself out into the back garden and have a stern word with yourself.

In fact, Blackstar tells us the only reason they included this effect was that a digital reverb – the usual answer for adding some ambience to an amp like this – would have been too much of a drain on the batteries.

On the subject of batteries, there are six rechargeable AAs filling up most of the back of the amp. We’re told they’ll last up to 50 hours of playing at low volumes, but only four hours at full blast. Quite a difference – and quite an incentive to turn it down a bit. 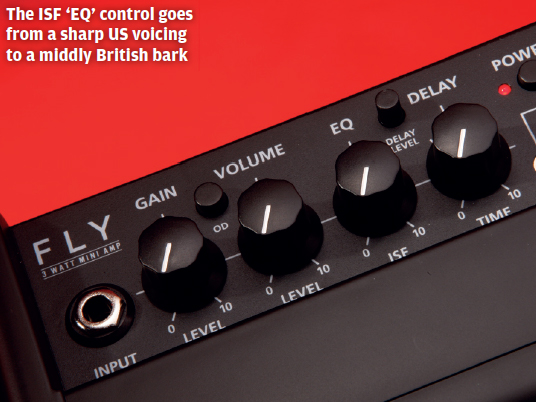 In Use
We’ll begin by popping the Fly 3 onto the nearest paperback-sized area of spare desk space and plugging in a Telecaster for some classic clean tones: Gain low, Volume at noon and ISF exactly halfway between California and Buckinghamshire (does anyone know why this dial is not marked US-UK, rather than 0-10?).

Now, 3W into a 3″ speaker is not going to make a dent in anyone’s eardrums, and we’re certainly not bracing ourselves for a tsunami of low-frequency oomph – but for unaccompanied bedroom playing it’s loud enough. It’s also very pure, very clear: very Blackstar.

Turning up the Gain brings some pleasing thickness and crunch, and there are no rattles or plasticky buzzes even with Volume at full. Engaging the OD switch takes us into a dirty version of the same sound – it’s not extreme and it’s not fizzy, just overdriven. A rock sound as lightweight as this is not going to make your day, but it’s pretty impressive given the dinky dimensions of the box it’s coming from.

It turns out Blackstar was quite right to stick with its ISF trick rather than fitting a standard EQ control. The American side of the dial has much more top-end bite, the British side more midrange bark; whatever guitar you’re using, you’ll find a place somewhere that suits it. That just leaves the little two-knob delay section, which sounds unspectacular but fine – the use of a tape-style effect means the repeats are nice and soft-edged, so they’ll sit in the shadow of the dry signal, adding a hint of ambience and not much more.

The delay is likely to come in handy if you’re widdling all over your favourite record and want to make sure your guitar sits reasonably well in the mix. Put that thing down for a second, though – the sound quality of external audio piped through the speaker is better than decent, and the Fly 3 Stereo Pack would doubtless serve as a capable smartphone-amplifying hi-fi for a small bedroom. If only you could get a subwoofer for it too…

Verdict
This is not the first product we’ve seen that promises to work as both a guitar amp and a mini hi-fi, but it’s got to be the cheapest. Accept the limitations of a 3W amp and you could not possibly be disappointed by the performance of this miniature magic box. 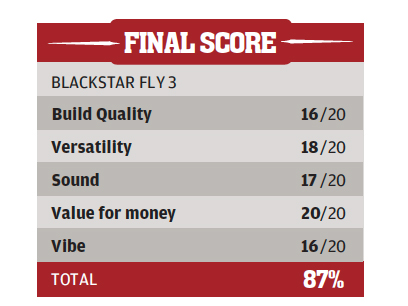