Now with added versatility, this compact combo from the second generation of Boss’s effects-laden Katana line claims to be good enough – and loud enough – for gigging 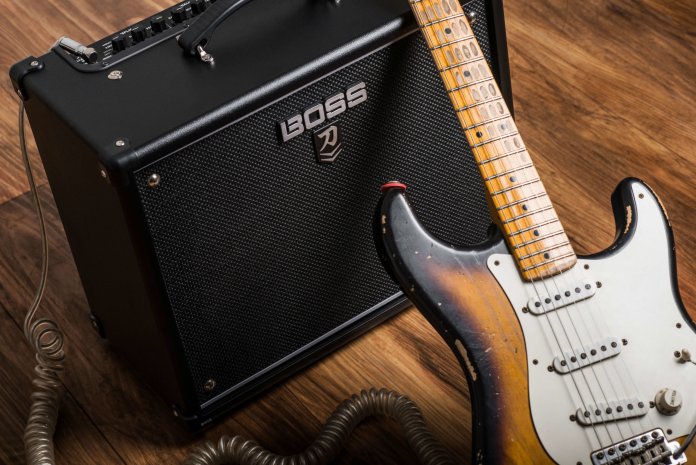 Doesn’t look very different to the old one, does it? It’s actually not supposed to sound very different, either, but the main advances are in tonal flexibility: there’s now a ‘variation’ option for each of the five amp types, effectively giving you 10 to choose from and the effects section has been redesigned so you can use up to five at once instead of three.

Those five amp types are acoustic, clean, crunch, lead and brown (a high-gain voice based on the EVH-inspired ‘brown sound’ in the Boss Waza Amp); selection is via a rotary switch, and you simply push the button above it to access the variations. As systems go, it’s a whole lot easier than stuffing 10 amps into the boot of the S-Max.

There are still only three knobs in the effects section, but two of them now have concentric mini-knobs to allow for separate control of boost, modulation, delay, reverb and a miscellaneous fifth effect. Obviously, each dial can only control one parameter, but five buttons along the top let you switch between three different models for each effect type, and there’s a tap tempo button for the delay. Deeper control over the effects is possible, but requires external software; we’ll come to that in a moment.

At the far right, we find master volume and a rotary switch for selecting either 50-, 25- or 0.5-watts of output power, and three more buttons that flip between manual and preset modes. By holding down the ‘panel’ button you can access alternative presets, so four different sounds can be stored and recalled here. More control is available; but again, we need to look beyond the amp itself for that.

Around the back, we find a USB port and a footswitch input. The former lets you connect to a PC or Mac and access a library of fully editable effects and amp tones, allowing you to fill those four preset slots with pretty much any sound you can imagine. The latter isn’t quite so exciting: it’ll only work with Boss’s single and dual footswitches for basic preset switching, or with an expression pedal. The six-switch GA-FC (£79) is much more practical for live use, but that only works with the 100-watt Katana models.

Also on the back panel there’s an input feeding directly to the power amp, for plugging in an external preamp or a multi-effects unit with amp simulation, plus headphone/DI out and stereo aux in.

This amp really does sound remarkably good, but there are a couple of issues to navigate first. The lightweight fibreboard cabinet feels solid enough for the price, but the two rotary switches don’t click into place with any confidence and the concentric pairs of controls sometimes stick together. Also, the whole control panel of our review amp has an intermittent habit of shutting down when you adjust the FX knob, requiring a restart.

You’ll have to track down your own cable to hook up a computer via the USB Type B port as one isn’t included, but once we update the firmware on our early run review unit, the software is a breeze to navigate, with new sounds easily saved onto the amp.

That said, you don’t need to connect to anything – well, apart from a guitar – to get the best out of the Katana-50 MkII. It’s a small combo and things can get a little congested when you push it hard, but there are some great sounds on offer here right out of the box.

With output set to 50 watts, a Telecaster on the clean setting floods the room with pure ‘valve amp’ tone. The low-end power and midrange clarity are truly impressive, even if the Katana-branded speaker wants for a little refinement in the top end. And there’s a fair bit of natural grit available, even without switching up to the crunch setting.

The two high-gain amp models are just as good, with ‘brown’ offering an irresistible shortcut to 80s hair metal – add chorus, delay and facial grimaces to taste. And those extra amp variations? They’re worthy additions for sure, even if at heart they’re just the same five amp types with a more aggressive biting edge – or, to put it another way, a British accent.

The effects are, in a word, familiar – this is a Boss product and we all know what the trusty stompbox titan can do in that field. The pre-loaded selection covers all the basics, from three different boost voicings to a nice trio of reverbs, while the three ‘FX’ options are tremolo, octave down and a very cool envelope follower.

The software opens up loads more options – over 60 effects in total, covering every imaginable type and with no obvious omissions from the Boss canon – but if you prefer to keep things simple, don’t worry: most people will get through most gigs with what comes from the factory.

Would we recommend doing gigs with this amp, though? It’s certainly loud enough for modern venues, but as we’ve seen, you will be limited for effect-switching options unless you fancy using a separate pedalboard. For those craving the undiluted all-in-one live experience, that’s probably where the 100-watt 1×12 model (£334) comes in. Still, for home practice, rehearsals and light gigging, the 50 is quite the pocket powerhouse.