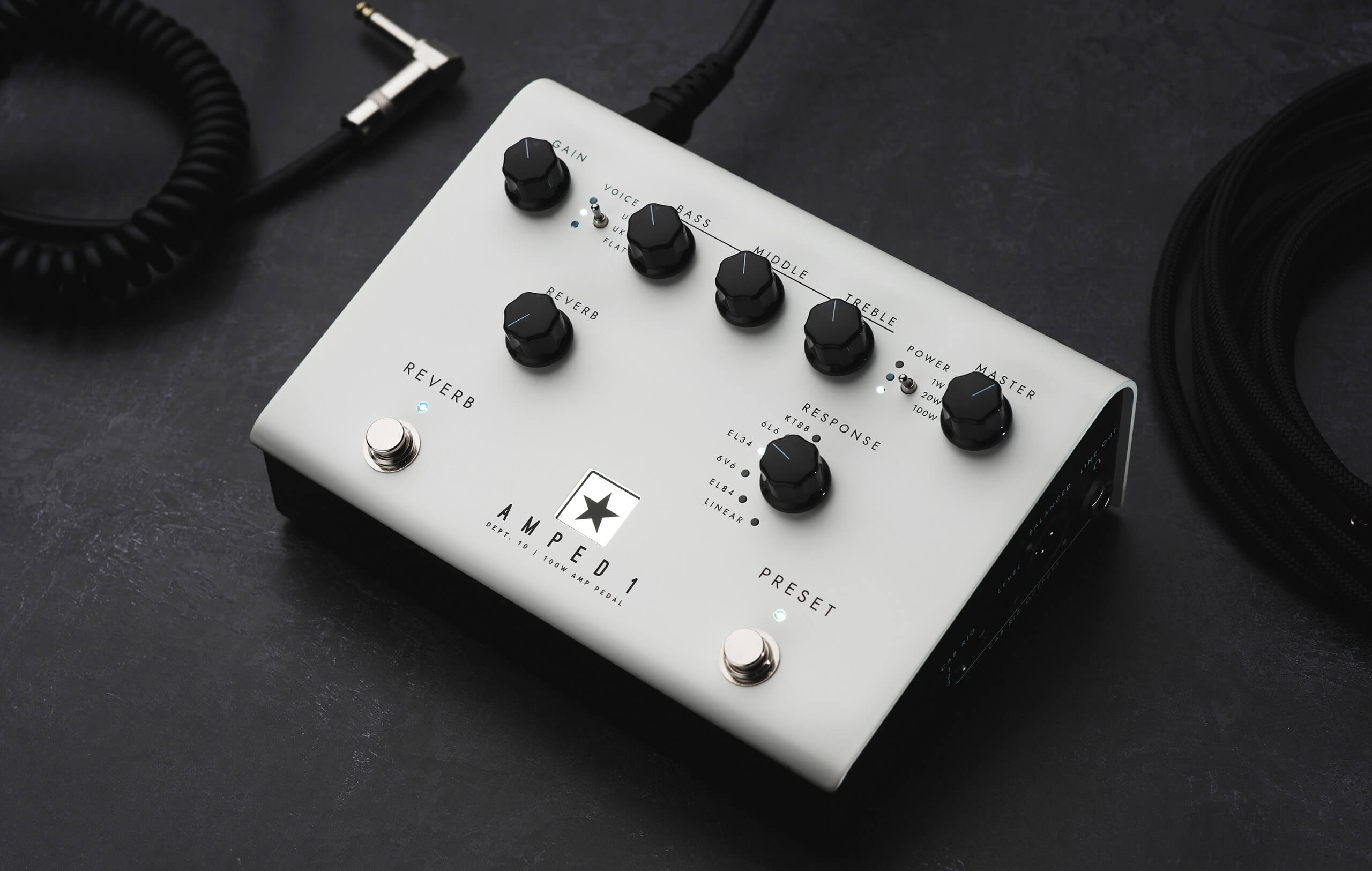 The Big Review: Blackstar Amped 1 – The power and tone that will make you want to leave your amp at home

Have the Brits created the ideal pedal amp formula here?

Verdict: It’s not going to win over tube purists, but for players who rely on pedals for their sound, this ingenious pedalboard amp could be just the ticket.

The rise of lunchbox heads and pedalboard amplifiers has had even the most ardent amp users contemplating downsizing their rigs, us included. But one thing that many of the previous attempts have been lacking is pure, unadulterated power. Sure, we want to drop the monumental effort of lugging our tube amps around, but not at the expense of its ear-splitting volume. Enter the Blackstar Amped 1, which packs a massive 100 watts into its sleek white enclosure.

Opening the classy packaging of the Amped 1, we find it’s not quite stompbox-sized, but it’s still dainty enough to easily fit in a backpack with plenty of room for cables and other consumables. It has the premium feel of the company’s Silverline and St James series of amps with its super-clean front face design, and a reassuring heft that lets us know it’s more than capable of putting up with the rigours of a hectic touring schedule. 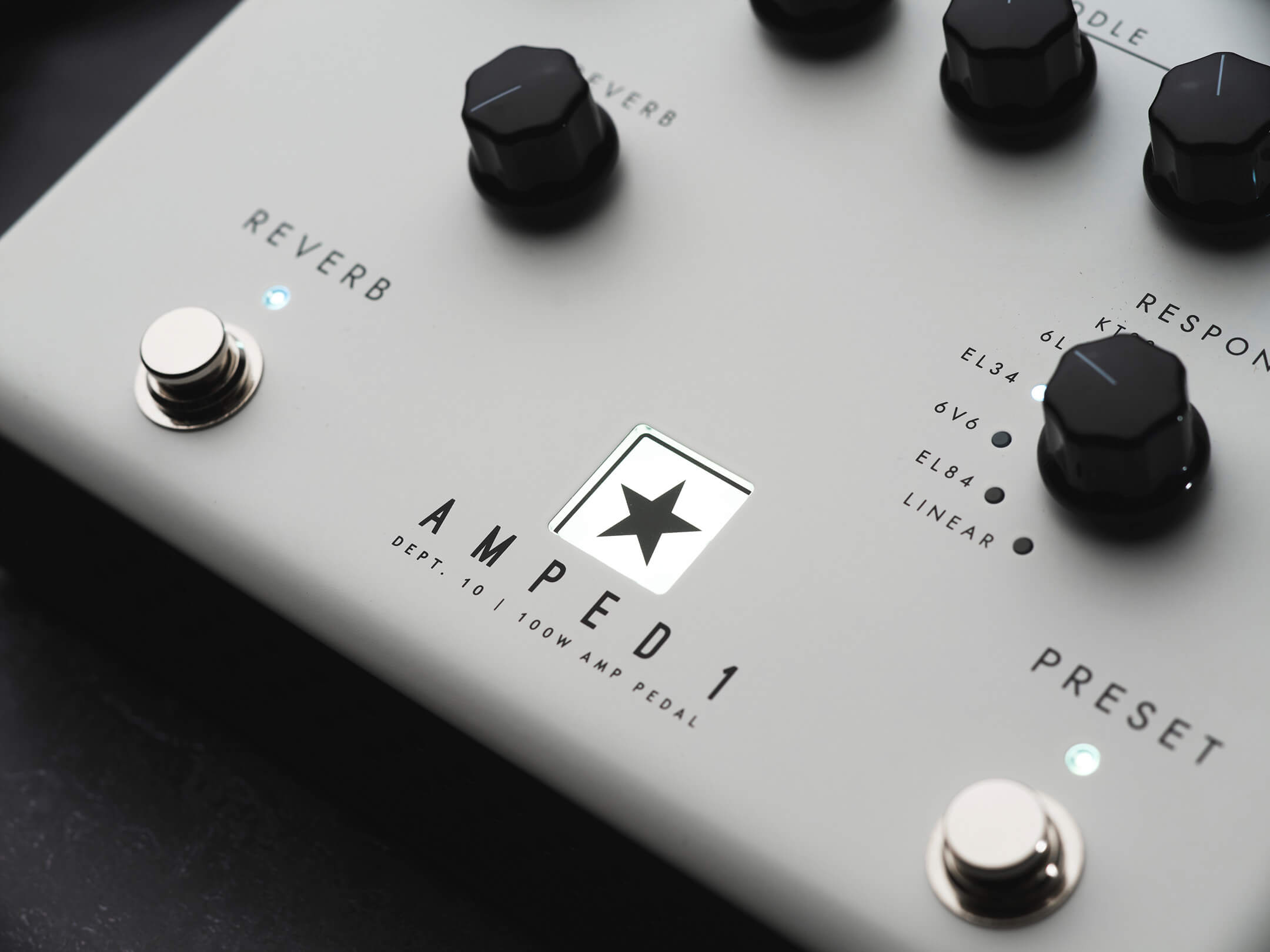 We’re immediately attracted to the ‘Response’ knob, which has its list of valve responses laid out logically, increasing in compression and overdrive as you move from the low-end hulk of the KT88 to the full-bodied EL84. A standard 3-band EQ sits next to the Voice switch, giving you both USA and UK-sounding amps to choose from, as well as a ‘Flat’ voice for use with floor modellers and external preamps.

Two soft click footswitches provide a gratifying response that has us pressing them repeatedly to feel the action. They’re not just pleasingly tactile though, the Reverb footswitch has a ‘Freeze’ function, allowing you to create some spacious pad sounds and play over the top. A dedicated Reverb knob lets you dial in the perfect amount, whilst the timbre and tone are customizable via the Blackstar Architect software. The second footswitch acts as a preset selector, allowing you to save your settings with a long press. 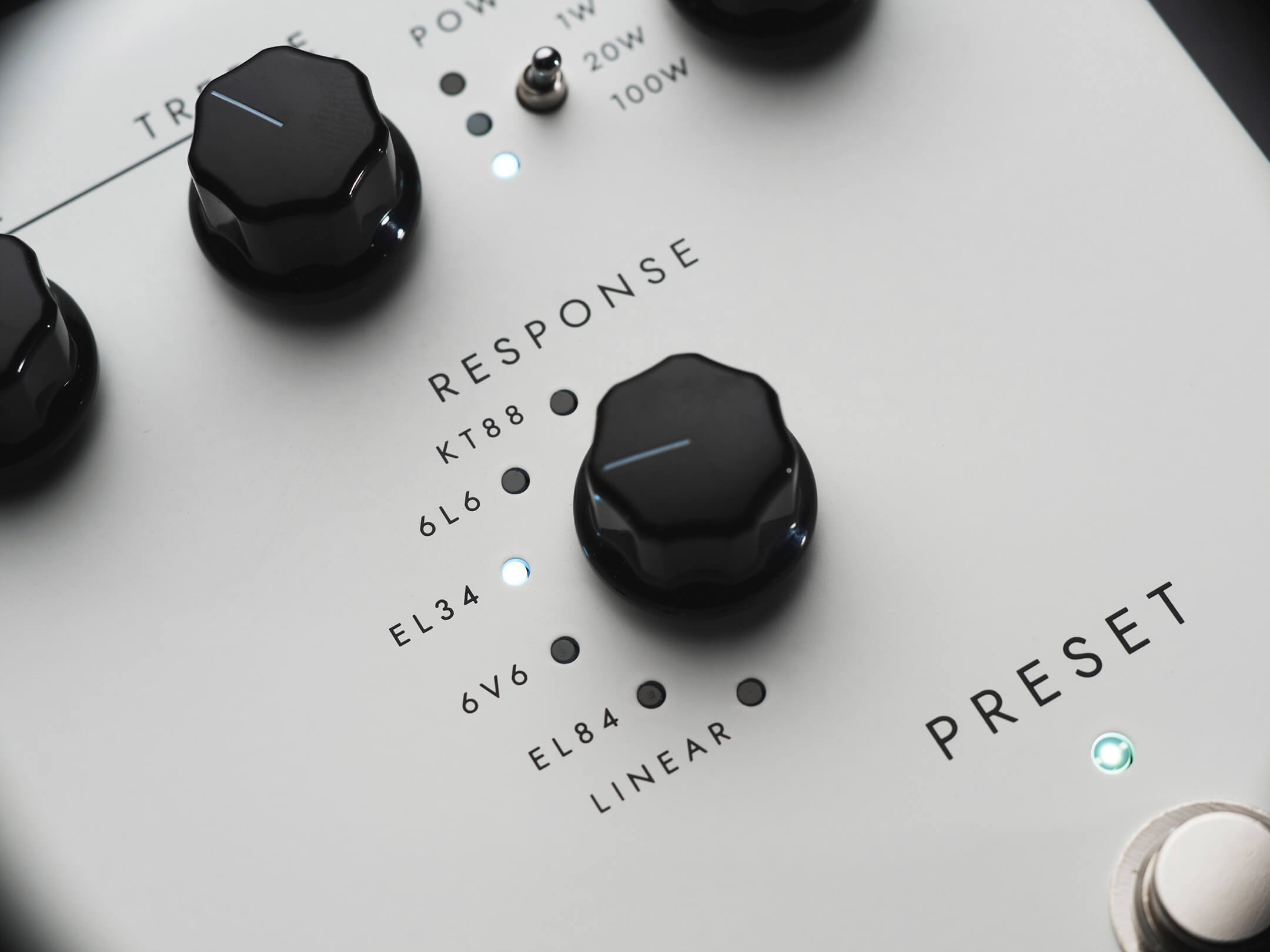 Heading to the rear panel we have our instrument input, a single FX loop-in, usable with the included TRS signal splitter cable, speaker outs for both 8 and 16 Ohm cabinets, and a USB-C for customising sounds with the Architect software or to use the Amped 1 as an audio interface. Handily there are two pedal power outputs that deliver a combined 500mA, which will power even your most advanced modulated reverb contraptions. We can see this being a very useful addition on crowded pedalboards, or if you fancy taking a small rig out on the road with you.

On the right-hand side, we have our Cab Rig Outputs section, which includes a balanced XLR and headphone out with a dedicated level knob, as well as a three-tier switch for selecting your particular cabinet of choice. Now that we’ve had a gander at the impressive feature set of this pedalboard powerhouse, let’s see how it actually sounds… 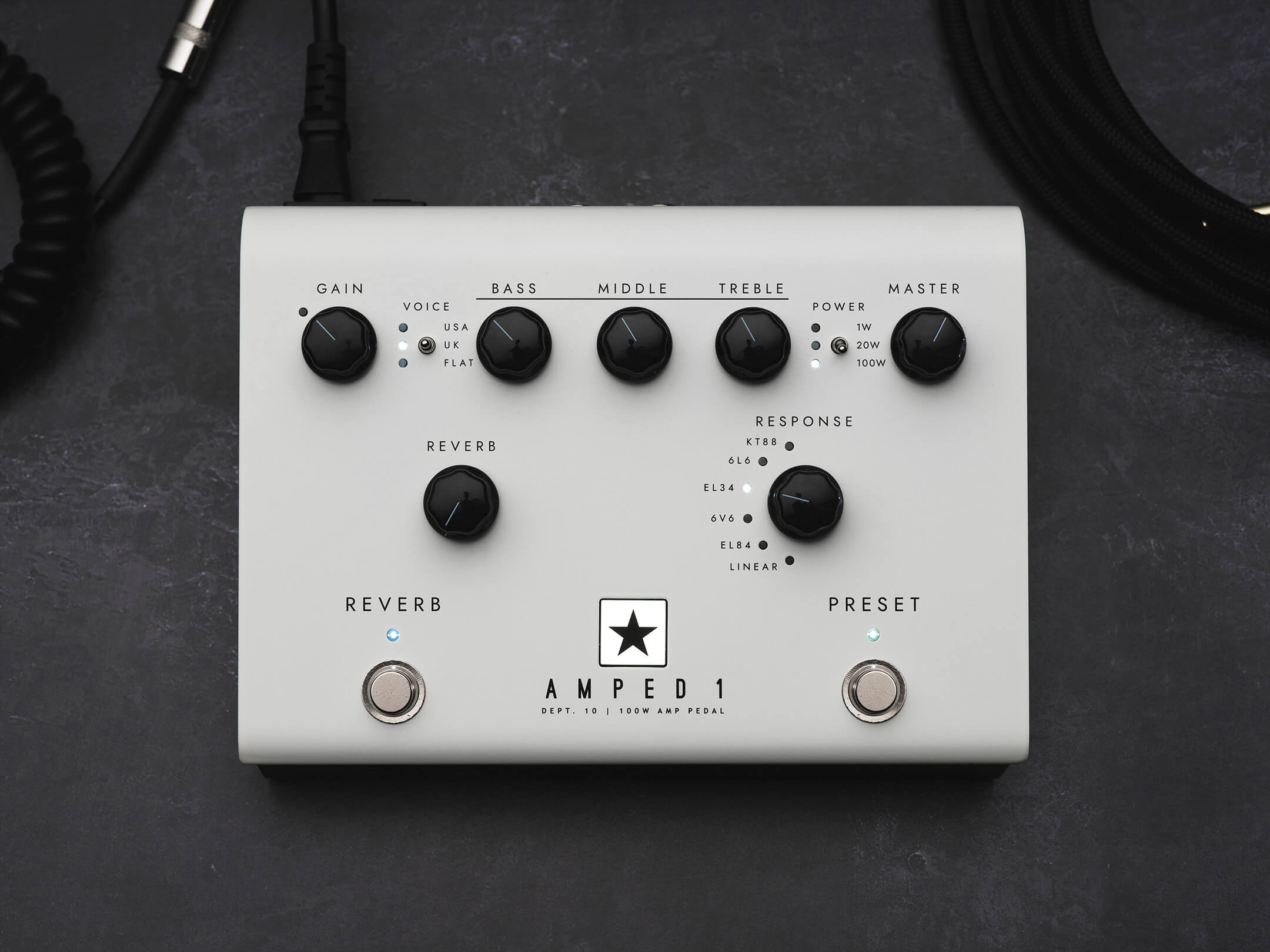 Plugging in our trusty Telecaster with the balanced out going to our rehearsal room PA, we’re greeted by the brightly lit black star letting us know the Amped 1 is alive and kicking when we flick the power switch. Setting the voice switch to USA, the response to 6L6, and the gain halfway we head straight for that linchpin ‘Twin’ tone and boy do we find it. Closing our eyes it’s damn close to the real deal and only the purest of purists would be able to tell otherwise.

Our need for a clean base tone sorted we look for something with more oomph, dialling the gain up, going for the UK voice and an EL34 response. It’s a fearsome Marshall-type roar we receive, with plenty of grit for blues licks and hard rock power chords. It’s a little ‘woofy’ in the low end with the knob set at 12 o’clock so we have to knock it back a bit to tighten up the low end. Maybe something we can adjust in the Cab Rig software – but more on that later. 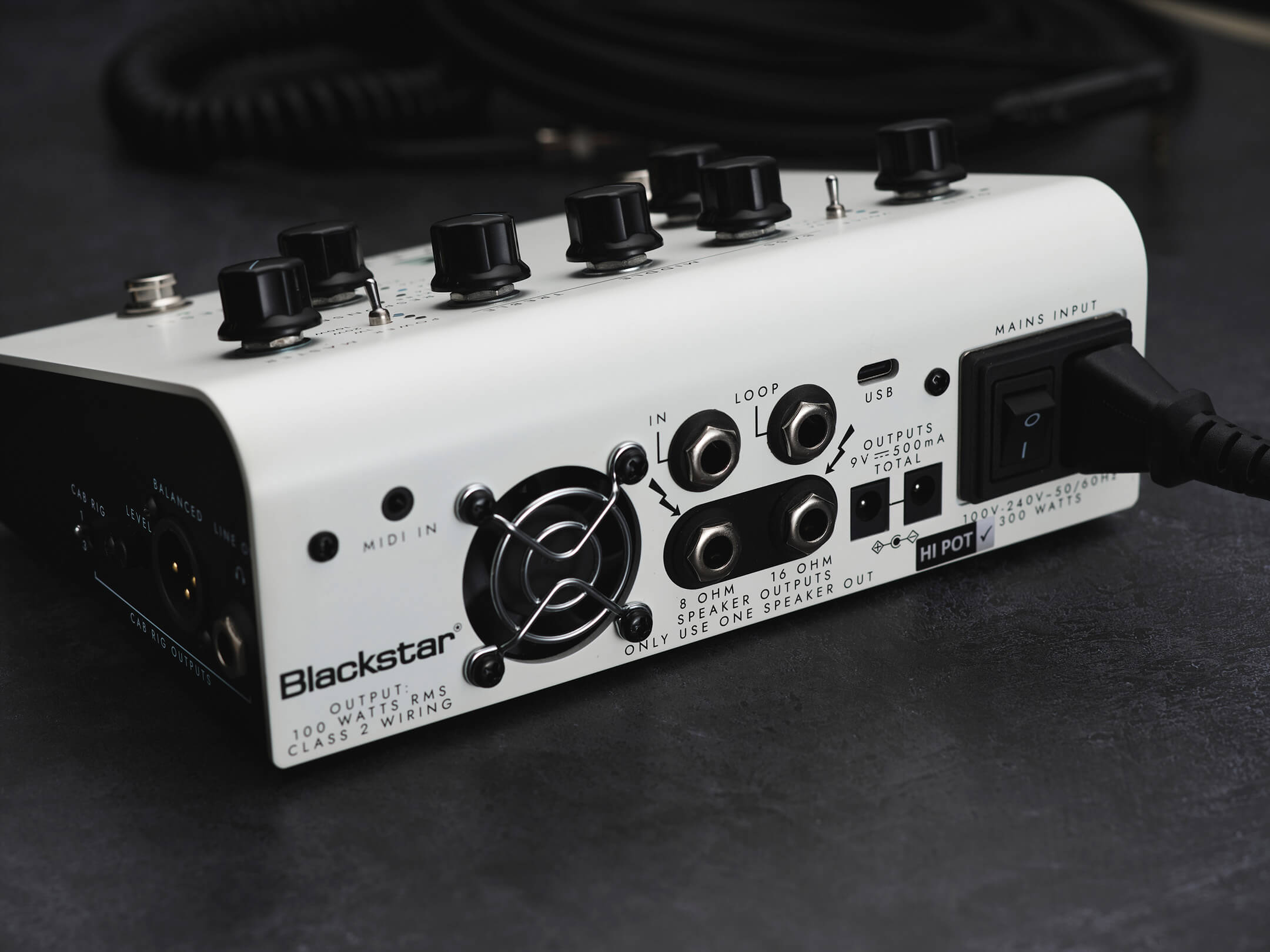 The response is really quite uncanny, feeling so much like a tube amp that we forget the sound is coming out of our PA speakers. It does a phenomenal job of replicating the quietest touches of fingerpicked arpeggios, as well as responding brilliantly when we dig in with a thick-gauge pick. The difference between the tube variations is really noticeable as well, from the tight, defined low end of the KT88 to the midrange gut punch of the EL84. In combination with the voice switch, it gives you so many tonal options even the most discerning tone warrior is bound to find something they love.

It is a pedalboard amp after all, so how does it play with our stompboxes? Plugging in our regular output alongside what would ordinarily go into our FX loop is a breeze thanks to the TRS splitter cable, so we’re up and running in less than a minute. Some more dialling in of EQ is required, but on the USA mode, we have a perfect pedal platform with bags of headroom, great news for our excessive stack of drive pedals. Switching to the EL84 response it doesn’t quite react as our brightly coloured 2×10 combo would do, but it’s impressively close. 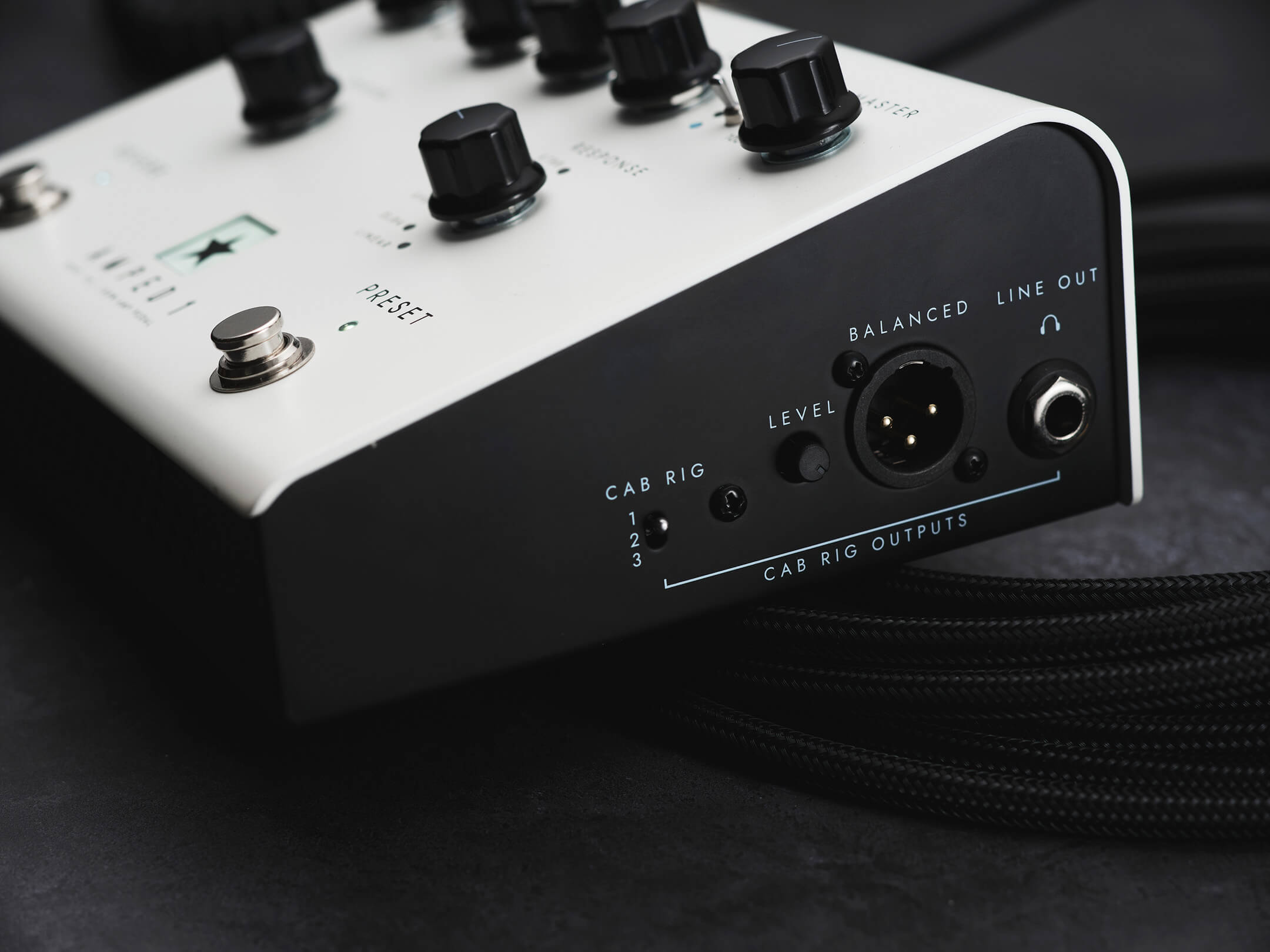 On the side of the unit where our XLR goes out, we also have the three-tier switch that lets you select your cab sound. Using the included USB-C cable, we plug into our computer and get into using Blackstar’s Architect software. There’s a myriad of options available for your cabinet, with your classic 2×12 and 4×10 options covered, as well as some more esoteric options like the 2×12 vertical stack, and options for straight, angled, open, and closed back configurations. Once you combine that with the six different microphones, available as both on and off-axis, as well as various room modes for the reverb, you’ve got a dizzying amount of tone options available to you.

You can also set the pedal up direct from the computer, flicking through the responses quickly, with the unit lighting up in kind. There’s some brief confusion about the two preset modes, it turns out that with the preset switch unlit it’s actually in manual mode, meaning any changes aren’t savable here. Somewhat annoyingly it also doesn’t save the master volume setting, which can result in unwanted volume jumps and both of these issues prevent you from using it like a true two-channel amplifier. 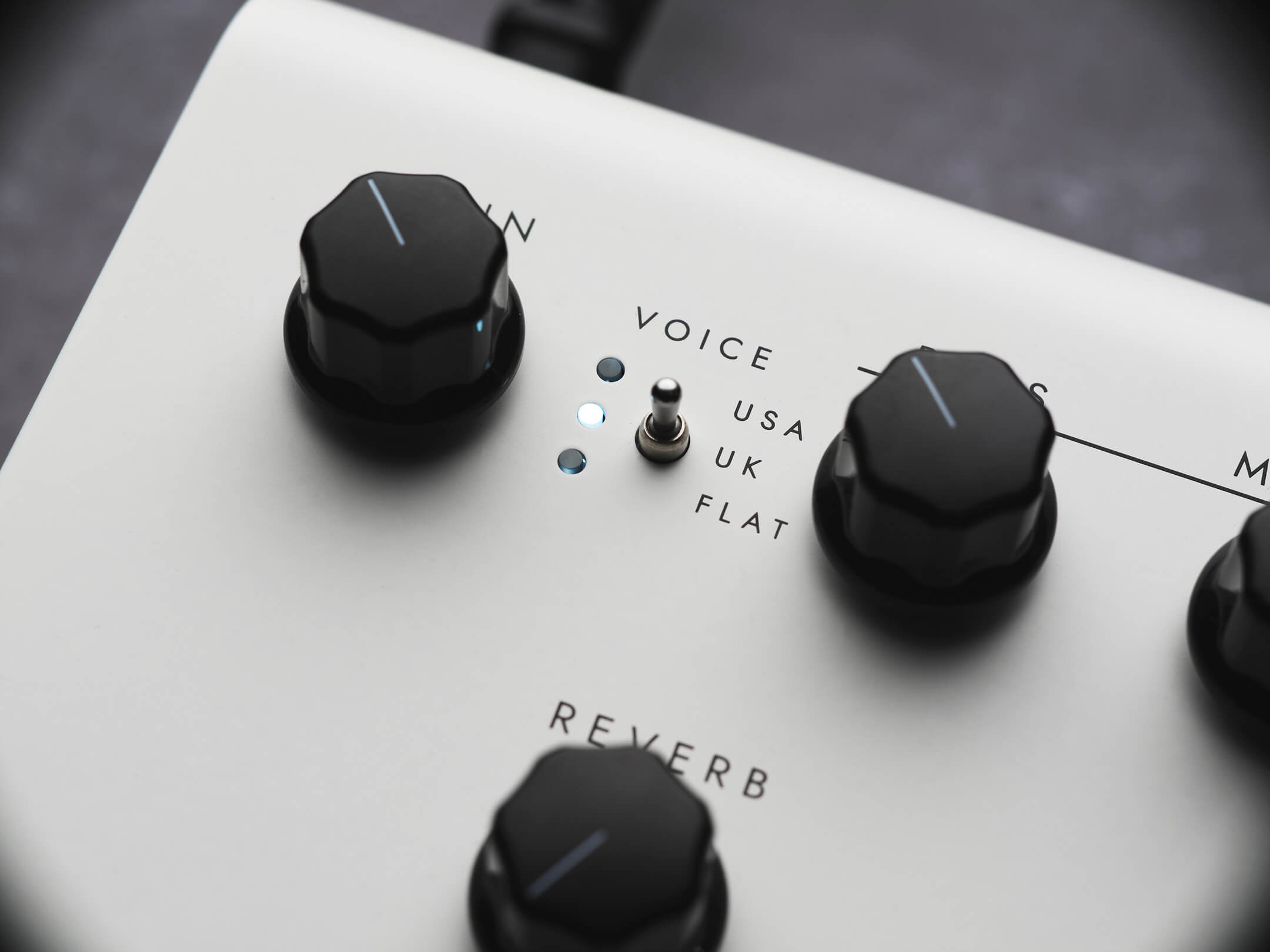 This aside, the Blackstar Amped 1 could certainly be just the thing you’re looking for to downsize your rig but keep the usable volume. It’s loud enough to gig with, versatile enough for practice at home, and will excel at studio work thanks to both the built-in power attenuation and the Blackstar Architect software. For tube tone purists, it’s probably not going to cut it, particularly if you get the majority of your sound from the amp itself. But for players who get the majority of their tone from pedals and need a versatile solution to replace their amplifier, this little box of tricks could well be the answer. 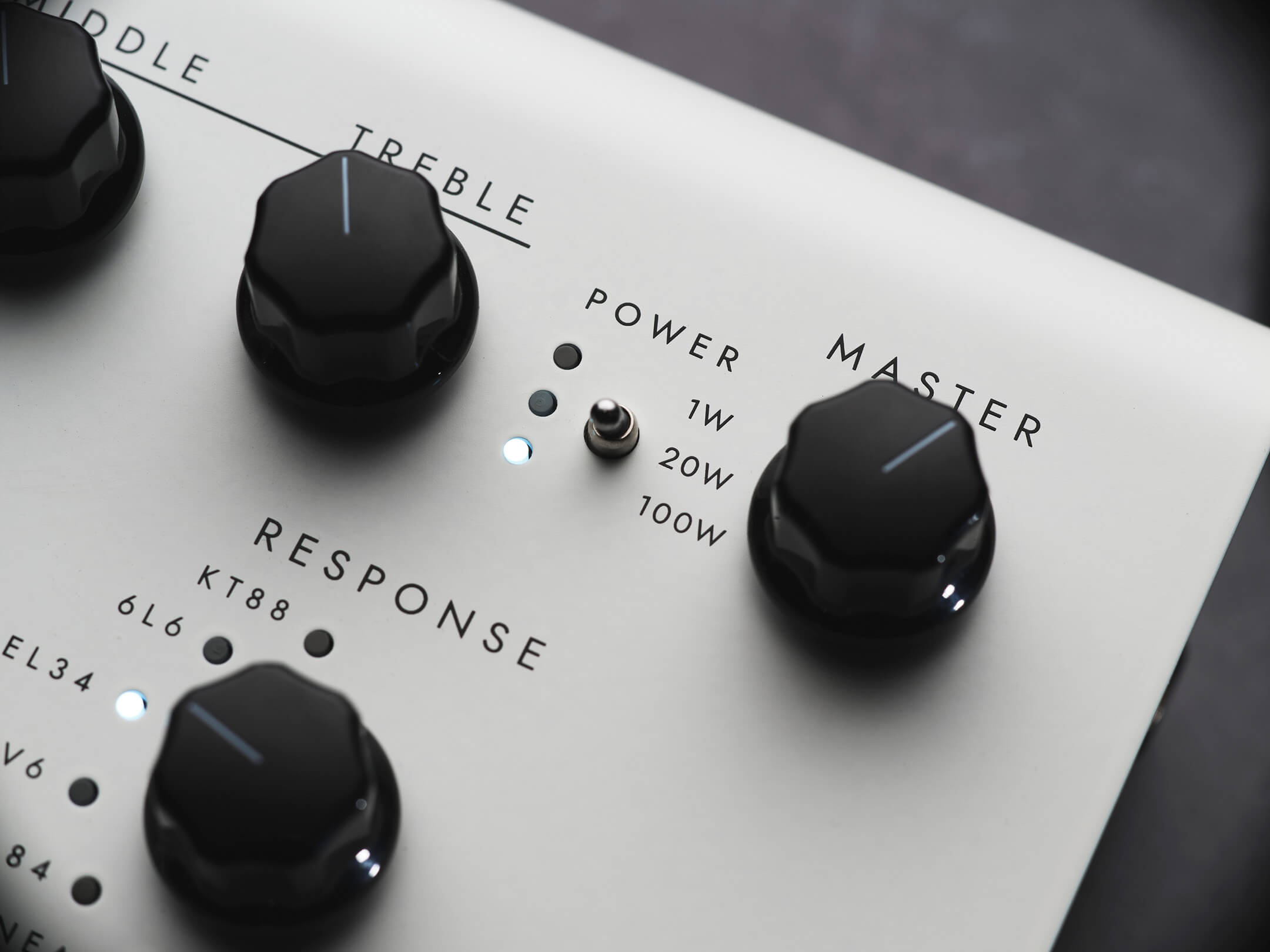