If you’re thinking of adding a pedalboard-sized amp to your rig, check out our picks of the best examples on the market today. 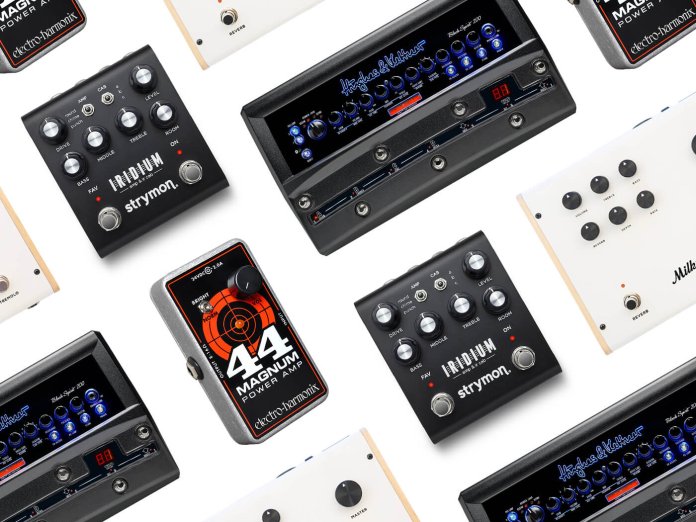 In an ideal world, we’d all be able to bring our favourite amps wherever we go. Unfortunately, logistics sometimes make it impractical to do so. However, having the right pedalboard amp can make it easier to ensure good, reliable tone when you need to travel light. Whether it comes packed with a bucketload of features or relies on a simple plug-and-play concept, we’re sure that you’ll find something suitable in our list of top pedalboard amps for 2019.

Depending on your needs you might need a power amp, a preamp or something that does both, so we’ve included a selection of everything in this list – mix and match at your leisure!

The Strymon Iridium puts three iconic amplifiers and nine different impulse response speaker cabinets at your disposal, all from the convenience of your pedalboard. The Room knob also allows you to control the level of natural room ambience and toggle between three room sizes (small, medium and large).

It’s hard to imagine a pedalboard-size amp packing 100 watts of power, but BluGuitar’s Amp 1 does just that. Its features include four independent and full modifiable channels, speaker simulation output for recording and three integrated footswitches. The Amp 1 also employs Nanotube technology for even greater tonal precision.

The Quilter Tone Block 201 may have five fixed analogue amp voicing, but the Tri-Q and Tone Cut controls allow the user the shape the amp’s tone to an exacting preference. The master control takes you from zero to 200 watts, so insufficient power is never a worry with the Tone Block 201. It was recently discontinued but you can still find stock being carried at major retailers.

ISP Technologies’ Stealth Pro Power Amp is as powerful as it is versatile. It can be used to power either a 1×8-ohm cabinet at 180 watts or set up for a stereo operation with 2×4-ohm cabinets at 80 watts each. Rack ears are also included for ease of mounting if you prefer to keep it off your board.

A true pedalboard amp if there ever was one, the Electro-Harmonix 44 Magnum packs 44 watts of clean power into a Nano-sized enclosure. A mini toggle switch allows the user to alter the voicing of the amp, taking it from a flat and neutral setting to one with more top end boost.

Taurus’ Stomp-Head series of pedalboard run a long gamut, ranging from vintage-focused models to hi-gain amplifiers. What separates the Stomp-Head from the rest of the pack is its use of Master Tube Design technology, which replicates the positive attributes of valves without the physical drawbacks.

If you thought the EHX 44 Magnum was small, Mooer’s offering just might make you do a double-take. At approximately half the width, Mooer’s Baby Bomb pumps 30 watts of power into any guitar cabinet with an impedance of eight to 16 ohms. The Master knob controls the volume while the Presence switch lets the user select either a warmer or brighter voicing. It’s the perfect compliment to one of Mooer’s teeny preamp pedals.

The Mojo Attack carries two of the most beloved tones of guitar-dom – American Tweed cleans and SoCal distortion. You might think that only having two amp voices to choose from may be limiting, but you can expect to cover a good amount of tonal territory between the two.

If the core of your tone is built around what’s on your pedalboard, then Seymour Duncan’s PowerStage 170 might be hard to resist. Aside from being small enough to be mounted directly on a pedalboard, the PowerStage 170 also offer 170 watts of clean power. A three-band EQ tweaks the preamp to provide the desired platform for digital modellers.

Despite its unassuming exterior, The Amp boasts 50 watts of power running through a discrete Class A circuit. Designed to replicate the harmonics and high fidelity tones associated with tube amps, Milkman Sound’s pedalboard amp also has onboard reverb and tremolo effects. The Amp also features a ‘pedal level’ output that allows it to be used as a front end of a pedalboard or as an amp-like effect on the back end.

Pegged as “the most urban guitar amplifier ever”, Vanflet’s Station1 aims to provide a consistent tube amp-like experience regardless of location. The 40-watt 12AT7-driven amp is about the size of a lunchbox and comes with an easy-to-understand front panel. Other features include a headphone jack and XLR output for nighttime playing and recording.

Check out our guide to the best modelling amps here.

Duet with John Mayer on TikTok, with his new karaoke version of Stop This Train

Liz Phair announces her first new album in over a decade, Soberish