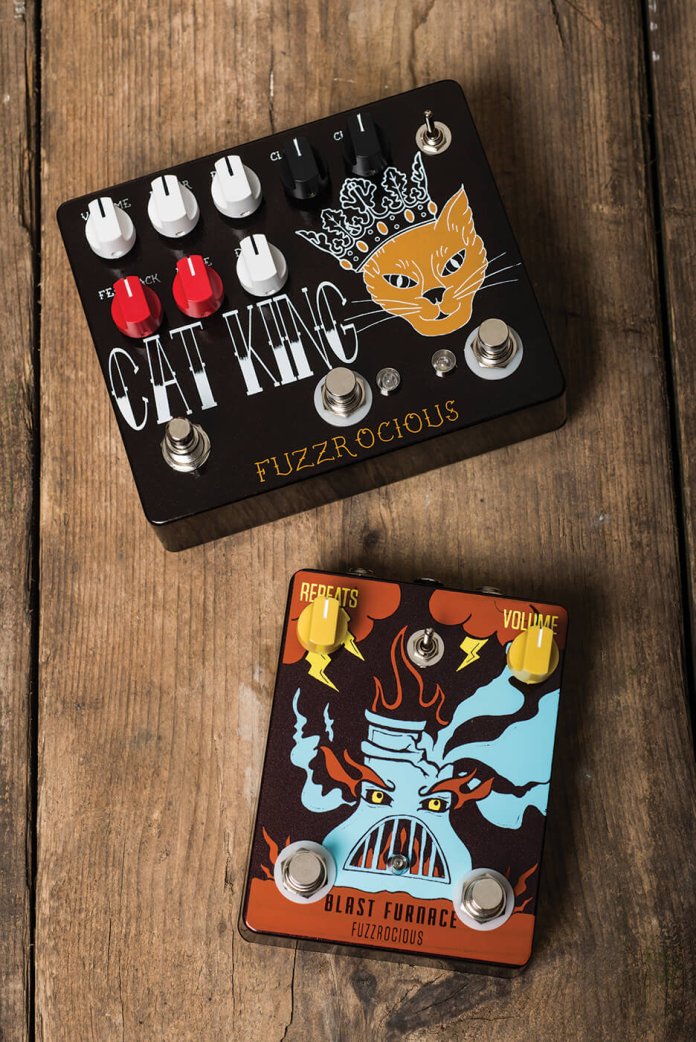 Ryan Ratajski’s Fuzzrocious brand is fast becoming an established name for guitarists looking for high quality, hand-wired boutique effects offering new music-led ideas and made to a standard rather than a budget. A lot of love and thought has gone into the creation of these pedals, and that’s evident from the discriminating choice of components and the fact that for practical and ecological reasons related to the use and disposal of batteries, they only run from a nine-volt DC 2.1mm centre-negative adaptor.

Today we’re going to be looking at two pedals from the company that offer refreshingly original takes on the more aggressive end of the sonic spectrum. The Blast Furnace is a bellicose sputtering fuzz with a raucous twist, but first, we have The Cat King, whose double-wide casing bristles with no less than eight knobs, three footswitches and a mini toggle switch – let’s dive in… 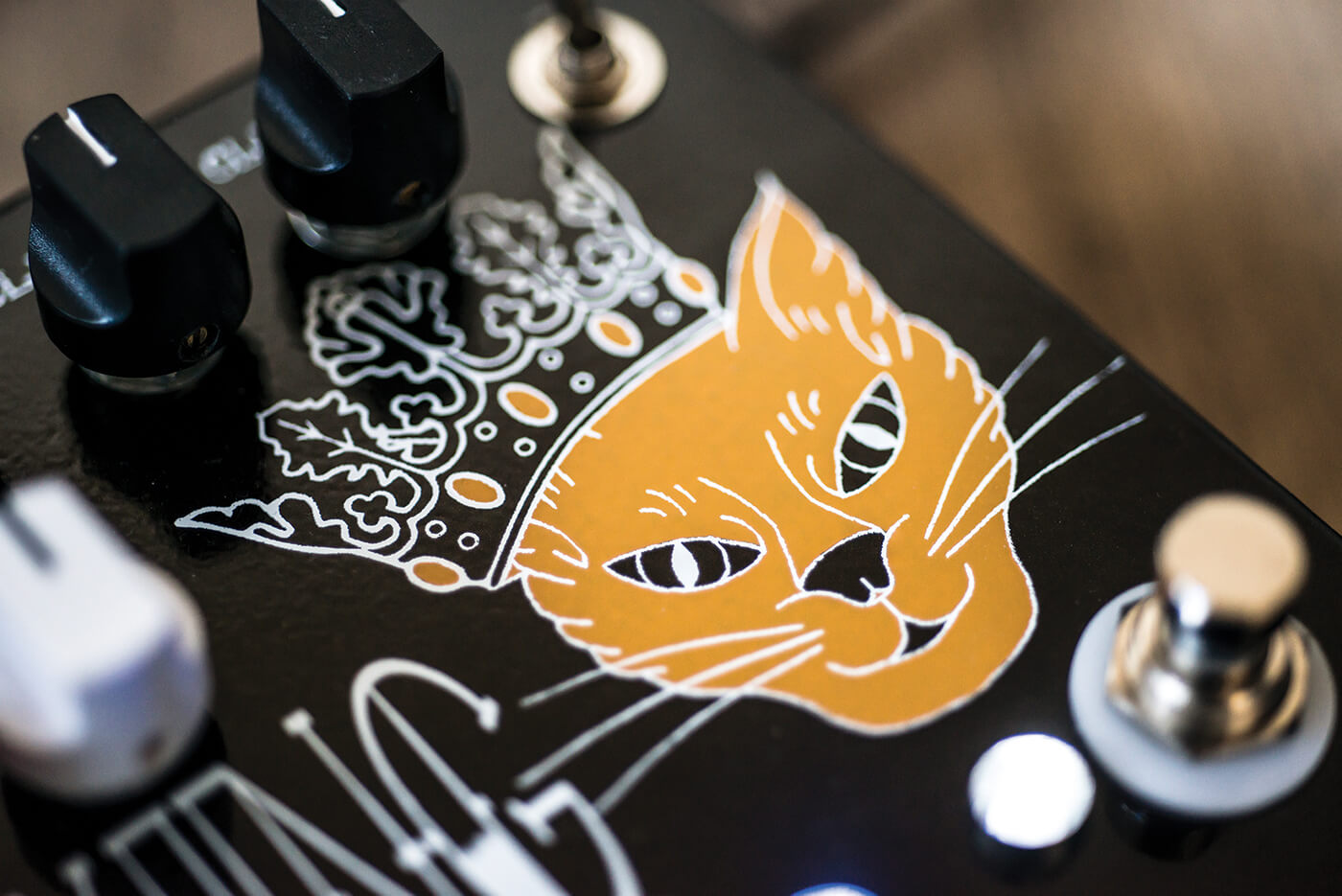 This pedal’s original name, The Rat King, gives us some insight into the intent of its creators – Pro Co’s original RAT unit has been a popular jumping off point for pedal makers since its arrival in the 1970s, and it’s provided the basis for Fuzzrocious’s feline fire-breather. Inside the Cat King’s mammoth casing you’ll find a combination of some of the more popular RAT mods, but with a little something extra that’s designed to elevate the design to new heights, and set it apart from the crowd – something that’s become a real hallmark of the company’s units.

At its most basic, it’s a low-to-high gain distortion unit with two distinct distortion modes. Now, this is not a dual-channel set-up, nor a cascading gain stage – you can set two differing distortion levels on the Cat King, giving all manner of crunch/distortion options with real ease and simplicity. There’s also a little sting in the tail courtesy of the feedback knob and dedicated footswitch – but we’ll come to this little wrinkle later… 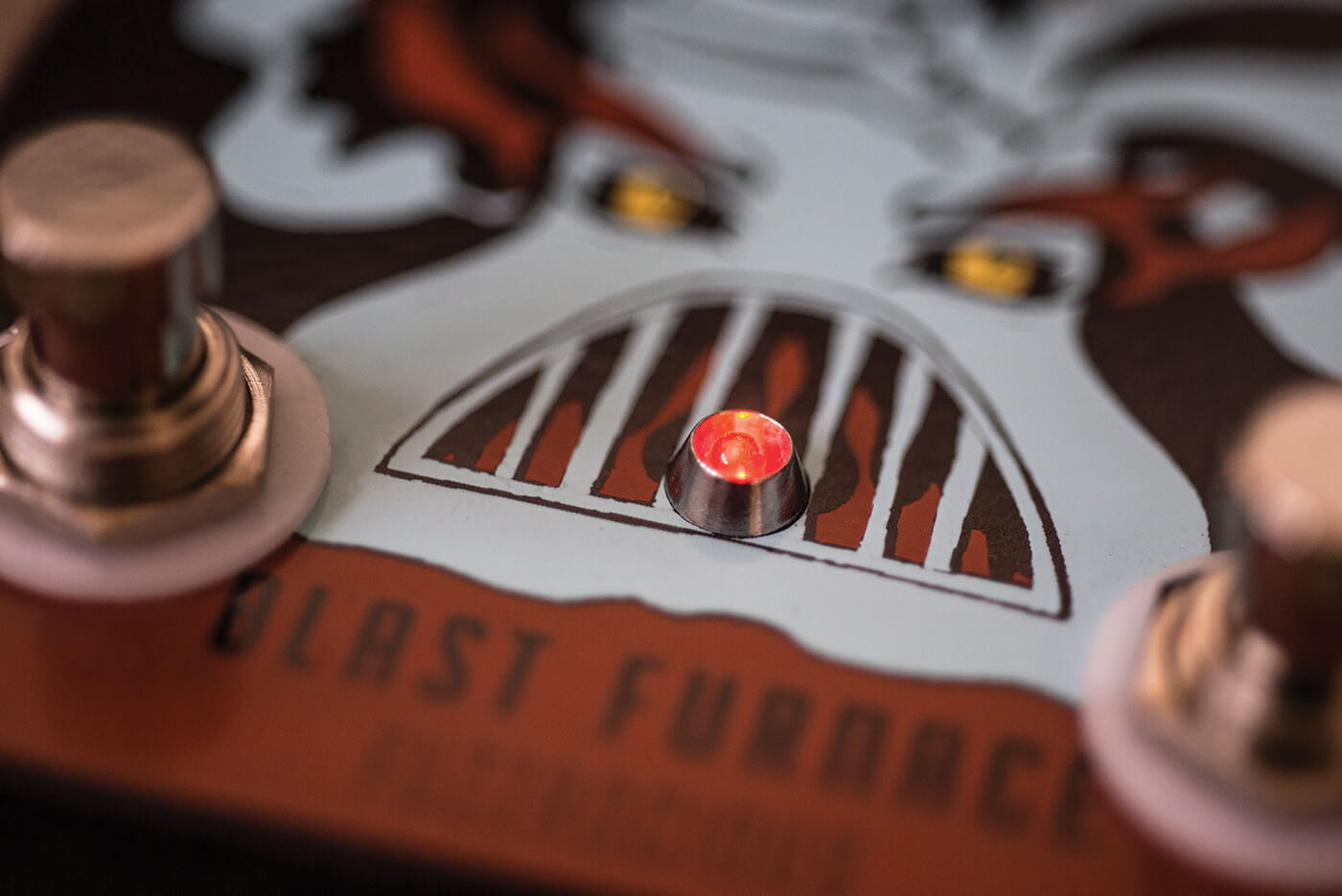 The fuzz world is a crowded place these days, with companies providing every flavour imaginable from the soaring Muff cello through to the stuttering, gated ‘turd covered in burning hair’ obnoxiousness.

At first glance, the Blast Furnace might appear to be limited in what it can offer with its simple control layout. But things get weird when a closer look at those knobs reveals, not the expected volume and tone controls, but volume and repeats. Hang on… repeats?!
Oh yes – the BF is listed by Fuzzrocious as a ‘fuzz with momentary delay’ – we did tell you that Fuzzrocious likes to sprinkle a frisson of the unusual into its pedal brew, didn’t we?

With such an intriguing design, it’d be rude not to start with the Blast Furnace, and while we go in with the full knowledge that the good people at Fuzzrocious intended to gift the world “an original gated fuzz” in this stompbox, the sheer ferocity on hand catches your reviewer spectacularly unprepared.

This thing is heavy. It’s aggressive, disconcerting, exhilarating and ultimately rather glorious. Though not intended as a retro sound, there are elements of the pedals that gave psychedelic and desert stoner-rock their power with touches of Ram’s Head and Good Companion in the mix, plus Fuzzrite and even momentary shades of the truly upsetting home-brewed Regulus VIII of the Os Mutantes golden era.

It turns out that the volume control is only there if you feel like engaging the pedal’s internal tone circuit with the mini-switch has caused your volume to drop. Otherwise this pedal is either on full or off. The difference in perceived SPL is actually quite dramatic when bypassing the tone section, granting the sort of wide-open sound often associated with wiring your guitar straight to the output jack.

And now about the delay. Given Fuzzrocious’s MO so far it would be misguided to expect a shimmering, multi-tap number. Instead we have something far more fun. This delay starts as a fairly heavy-handed slapback and by the time you’ve turned the knob fully clockwise, it becomes a self-oscillating burbling screamer of joy. Fuzzrocious has put a momentary switch here meaning that an adrenaline-pumping sonic barrage is accessible literally on tap.

Despite its aggressive nature, the Blast Furnace does feel very responsive and grippy, with nuances of screaming bends and vibrato coming through clearly before the gate snatches your note into sputtering nothingness.

Having suitably recovered, we turn our attention to the Cat King. With its big enclosure and myriad knobs, it’s a little intimidating off the bat, so let’s run through them. The volume knob of course is self-explanatory. Next to it is a filter knob which rolls off the highs as you go clockwise. Once you pass the two distortion controls you are confronted with a brace of knobs labelled clip 1 and clip 2. These allow the player to sculpt the way their bass and treble signals distort, a potentially very musical feature.

As the name suggests, the diode knob allows the player to blend between either a 1N914 diode like the original RAT or the LEDs that were used in the Turbo version. There is also a diode mini-switch that bypasses this part of the pedal for an untrammelled, open sound.
Finally there is a feedback knob with its own momentary footswitch. You’d be forgiven for assuming this is part of a delay. In fact this produces instant squalls of screeching chaos that disappear as soon as you take your foot off the button.

It’s the sort of life-affirming hooliganism that noise artists will appreciate very much indeed.

You can manipulate the character and pitch of this sonic assault with your guitar’s volume knob, which reassuringly does not clean it up nicely in the slightest as you roll it back towards zero.

Any unit offering so much will stand or fall on ease of use. The Cat King is a well thought out and intuitive pedal with a sonic palette that covers everything from punkish overdrive to brutal, crushing (but never fizzy) distortion and, with the judicious application of the feedback switch, utter madness awaits.

More than just another high-end distortion unit, The Cat King could take care of all your gainy needs

+ If you like this sort of thing, the Blast Furnace is an unstoppable juggernaut of sonic bad behaviour
– It’s a bit bewildering and a little upsetting if you don’t…

Part effects pedal, part exfoliant, the Blast Furnace is a force to be reckoned with. True fuzz lovers take notice