A handwired box of dreamlike reverb flavours for the unhurried texturenaut. Time to tune up, turn up and zone out… 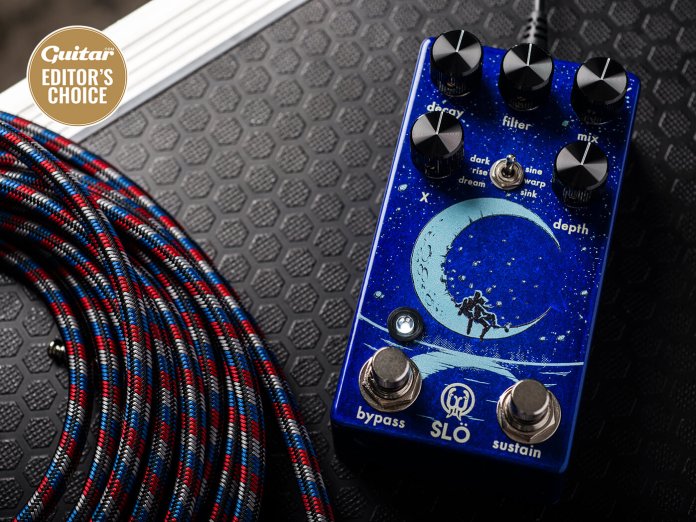 Sometimes, it’s not all about frenetic sweep picking, ornamental arpeggios or artful blues turnarounds – sometimes, it’s all about texture. Although it might be tempting to dismiss the resurgent ‘shoegaze’ movement as a cynical ploy by pedal companies to shift more units, the fact remains that there is a growing subsection of players (doubtless inspired by the glorious celestial workings of Radiohead’s Ed O’Brien, Swervedriver and Ride) whose primary goal is the creation of magic realist, otherworldly atmospheres. It’s this group that Walrus Audio’s latest offering, the Slö Multi Textured Reverb, is aimed at.

As might be expected from a contemporary USA boutique pedal, there’s evidence that much thought has gone into the Slö. The jack and power sockets are top-mounted to make the unit pedalboard-friendly and the knobs are all smooth and precise. There’s a full complement of the usual control suspects: decay, mix and depth, with the added attraction of a filter and another knob simply marked ‘X’, which plays different roles depending on which algorithm has been selected.

A centre-mounted mini-toggle switch gives you access to three reverb types: Dark (adds a lower octave), Rise (ambient swell with a slow attack on the reverb) and Dream (latching pad controlled with the sustain footswitch). Secondary functionality is also accessed when you hold down the bypass switch, which changes the wave shapes of the reverb tail from a smooth sine wave with even pitch modulation (Sine) to warped record (Warp) and Bigsby drop (Sink). This is a somewhat dizzying amount of options and it hints at ethereal possibilities to come.

There’s a lot to unpack with the Slö, but it is apparent from the start that the sounds within are not only extremely high quality but also – and this is crucial – usable. All too often, lush, multi-layered textures are added to pedals and multi-FX units almost as an afterthought but in the Slö, we discover new and thought-provoking sonic landscapes that fit well in both live and recorded mixes with very little tweaking.

Our immediate favourite combinations are jangly Gretsch chords with the Dark sub octave grumbling underneath, summoning a choir of angels behind an acoustic guitar with the Rise setting and the psychonautic experience that is the Dream setting. In conjunction with the sustain switch, the latter allows you to surround yourself with swirling, somnambulant textures as you solo (tastefully) over the top.

Throughout our time with the Slö, we find the control system intuitive, with a large amount of range to each parameter. The bass octave and modulation track well and no matter how hard we push the filter, the top end remains silky and dynamic with not a hint of ‘Christmas reverb’. Fans of self-oscillating, end-of-the-gig pedalboard wig-outs will find a new friend here.

If you’re looking for the most authentic reproduction of a kickable spring reverb tank then the Slö is not for you, but nor is it strictly limited to the Jazzmaster/Strymon enthusiasts out there. This is a powerful pedal with as much to offer soundtrack composers, psychedelic rockers, soundscape artists and electronic-music producers as it does the eBow, Altoids and Instagram brethren.