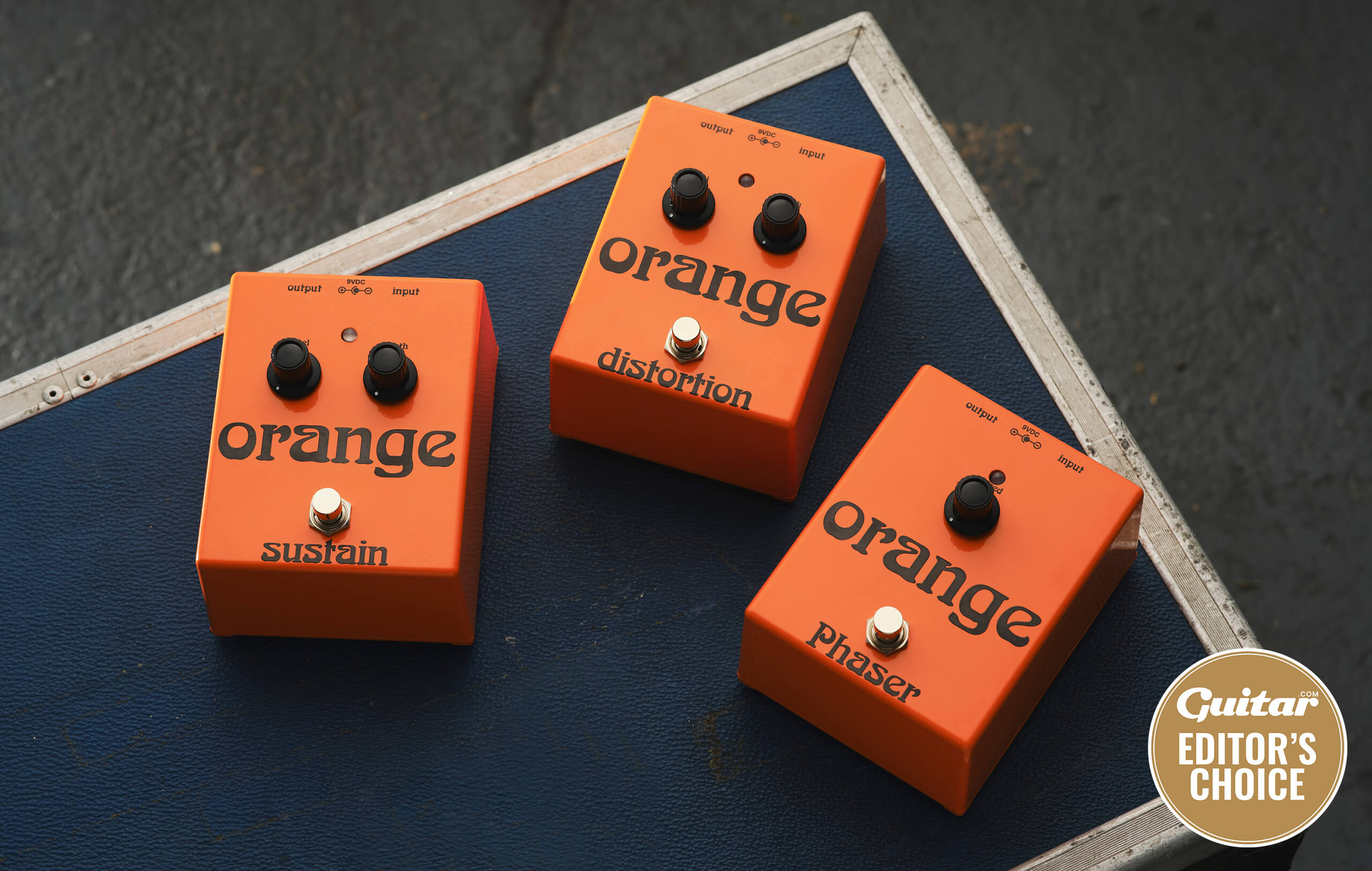 The Big Review: Orange Sustain, Distortion and Phaser – do these 70s throwbacks have tones to suit the modern player?

With faintly ridiculous oversized boxy enclosures and stripped-back controls and livery that recall a much simpler era of effects – but there’s more going on here than revivalism.

While they might look like the 70s originals, they’re no slavish clones – instead modern tweaks have created an impressive sounding and joyously fun to play trio of juicy toned pedals that would suit any pedalboard.


Social media has a lot to answer for, but occasionally it can also be the vehicle for exciting things to happen. Indeed, were it not for the individual who posted a photo of the original Orange Sustain pedal from the 1970s along with a call to revive the pedal, then we might not be looking upon these three blocky beauties that sit before us today.

That post in 2019 sent Orange’s head designer Adrian Emsley on a journey into the company’s archives from whence he emerged with some old schematics and an idea. Bring one pedal back? How about a whole range, made in the UK and even more orange than ever!?

Joining the Sustain in this three-pedal lineup are the self-explanatory Distortion and Phaser. The Sustain is actually a vintage-style two-knob optical compressor with controls for Level and Depth (though unlike the original, the Depth knob here controls the amount of compression). The Distortion does what it says on the tin, while the Phaser is a one-knob four-stage affair that is as vintage and simple as you like. Modern users might balk a little at the lack of control or clarity offered by these pedals and their labels, but they are of course accurate to the originals – and let’s not forget, most Orange amp users have to make do with symbols on their amp controls!

While outwardly these pedals might look like faithful reissues, primarily because of those borderline-impractical enclosures, there have been some tweaks to the formula. For starters, that distinctive colour scheme is an ever brighter shade of orange than the vintage units, and there are also some concessions to modern playing needs – namely standard 9VDC power supply and bypass LEDs.

The decision to exclude battery clips in this run of pedals was a conscious choice on Orange’s part, and while that might offend PP3 obsessives, Emsley says it’s an easy job to solder in one if you want to, and those tank-like enclosures ensure there’s plenty of space to safely tuck a 9V inside! The majority of these will end up on pedalboards however, and as such we have no concerns with the decision to go PSU-only.

The trio’s internal circuit architectures have also been updated too, with the Distortion in particular having had had its its back-to-back diode design replaced with a new amp-style JFET circuit for far greater amp like response and lower noise floor, and both the Sustain and Phaser being tweaked for better bypass tone and reduced noise.

Plugging in our PAF loaded Les Paul into our black panel Deluxe, two things became immediately apparent about the Distortion; this is a loud pedal, and this is an angry pedal! The gritty texture of the distortion appears with the prompt immediacy of a punk band at a free bar, punching its way to front of a mix with self-confident authority. As you as you wind up the gain knob, labelled Depth to reflect the original, things just get more and more aggressive and obnoxious, but in a glorious way.

Sonically, the Distortion does exactly what it says on the tin, this is no smooth overdrive masquerading as a distortion, fans of smooth legato lead lines might be better looking elsewhere, instead those looking for angry aggressive meaty riffs and alternative tones from gnarly 70s rock to grungy power chord riffs, may well have just found your new sonic nirvana. 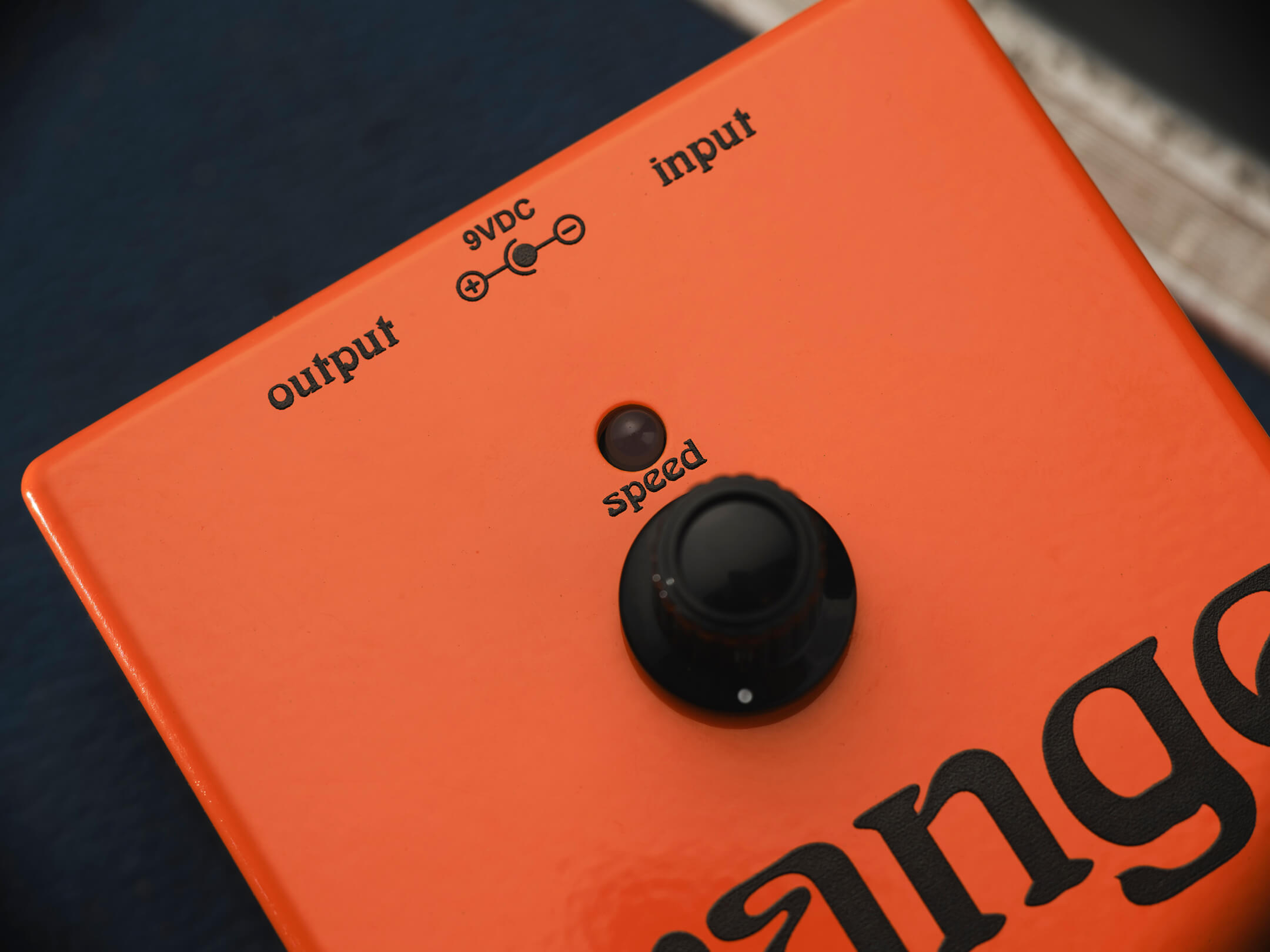 With its buffered bypass, amp like in its circuitry including a tone stack, bass and middle are set but Orange have included a handily treble control inside meaning you can set it to optimal response with your amp of choice, or leave it at the stock position – we felt no need to tweak it during our test.

Following the impressive start and our ears still ringing from the distortion, we plug in the Sustain. As with the distortion, Emsley’s modern tweaks to the vintage design extend to the circuit to the original, with this one utilising a differential side-chain design that gives a smoother bloom to the compression decay and buffered bypass. 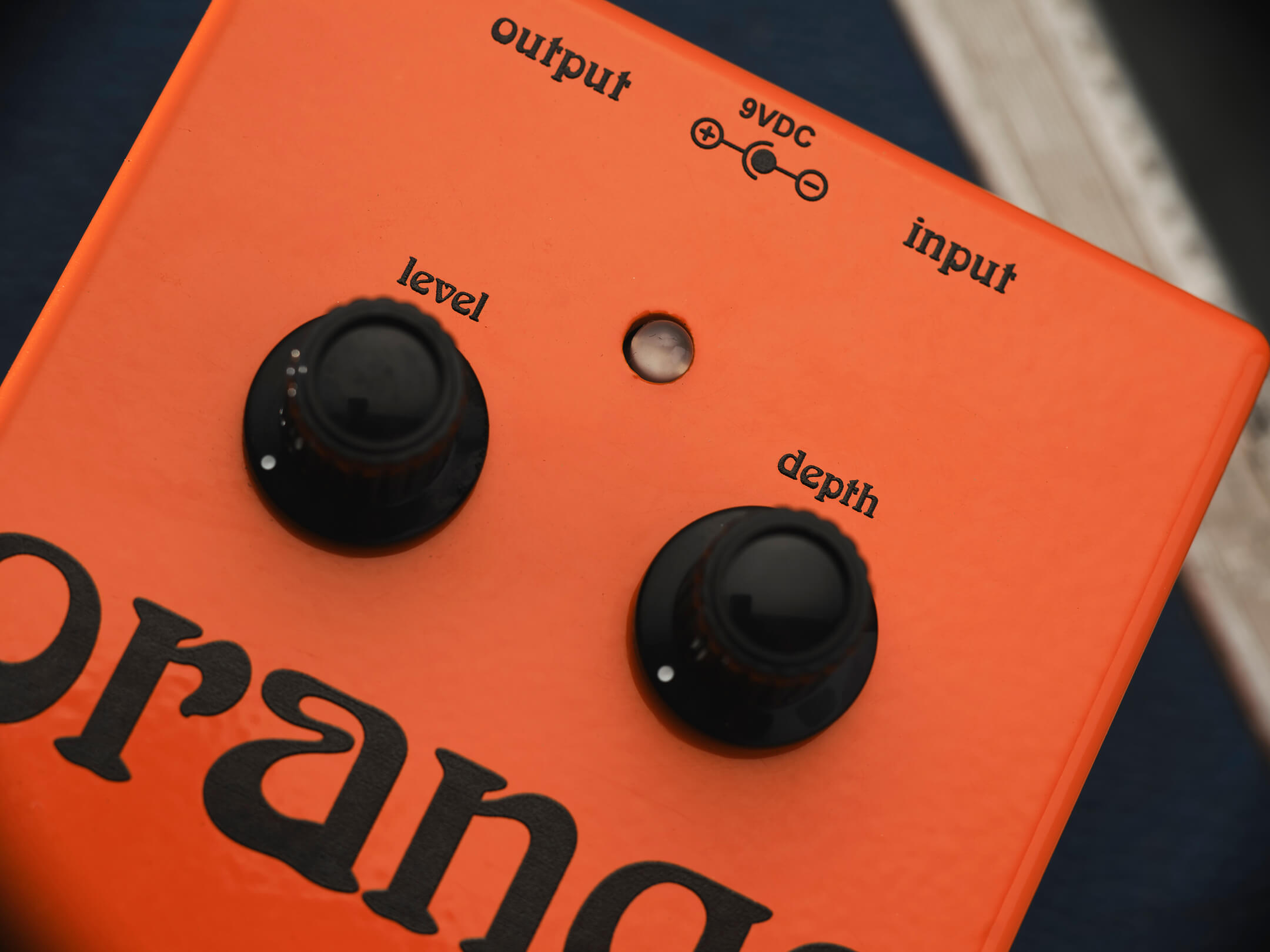 Attack and release times are preset, while this time the Depth control selects the amount of compression, while the Level does what you’d expect. Cleverly, the blue LED also flashes red when gain reduction is occurring giving a nice visual feedback on the compression effect without breaking the vintage vibe.

Swapping out our LP for a Strat we find a deliciously addictive squish and sustain with impressively low background noise. Country bends, single-note runs and chordal arpeggios ring out with sweet authority and sustain yet never feel artificial, despite some serious levels of squish being available if required. 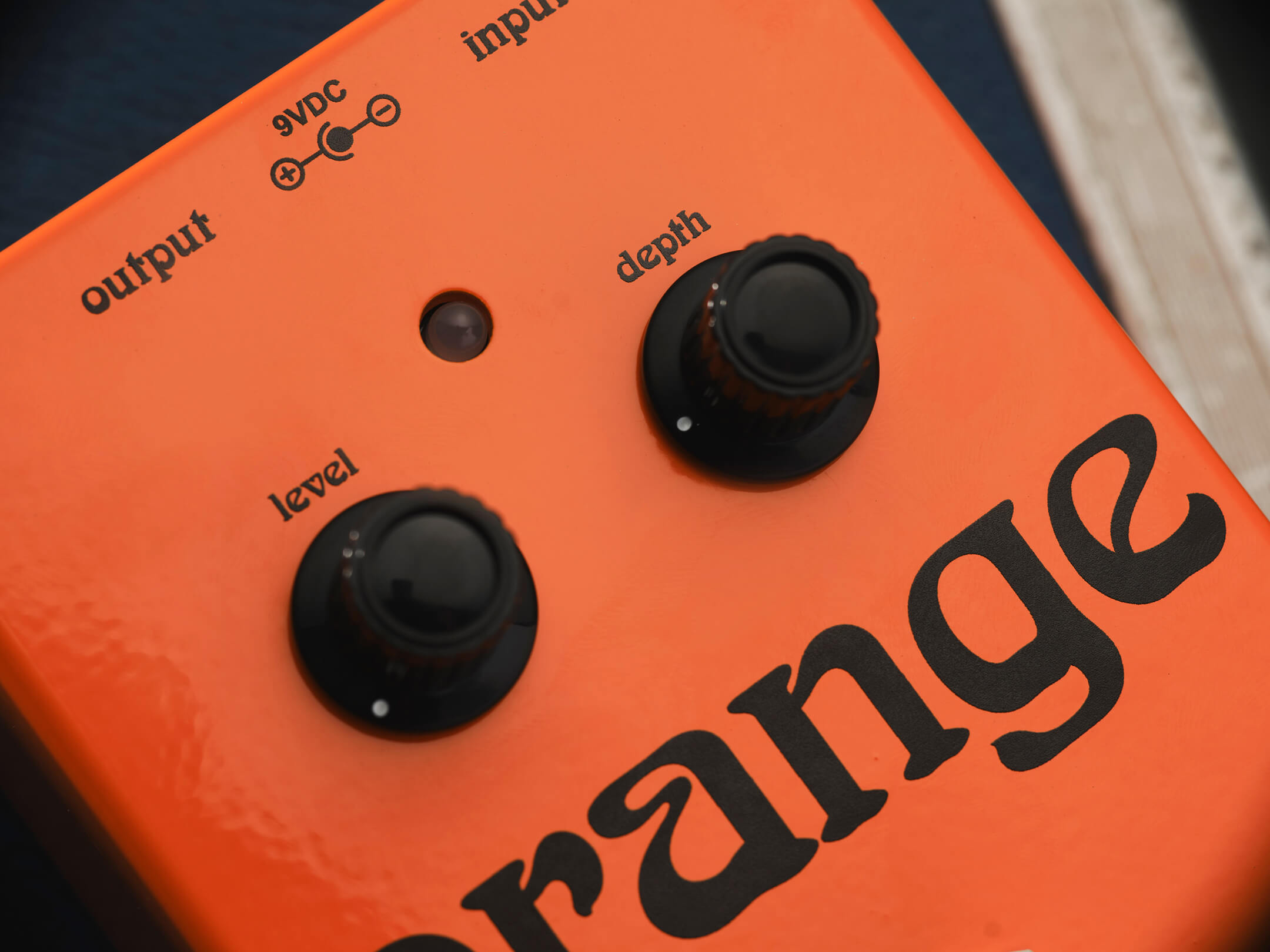 Dialed back to more subtle settings, we found the Sustain to be a beautiful sounding ‘always on’ tool, making each of our guitars and amps simply sound better.

The only downside with it being such an organic-sounding circuit is the lack of attack and release controls, which would give the Sustain the versatility to be employed across a range of instruments.

Finally, we come to the Phaser, which visually at least recalls another famous one-knob orange phaser of the 70s… albeit a Phase 90 that hasn’t been to the gym for a few years. The Orange unit impresses us immediately with its quiet operation, low noise floor and rich warm tone. Like the original pedal it’s a four-stage design, but the updated JFET-biased op-amp design means that it’s much quieter than many phasers of this era. 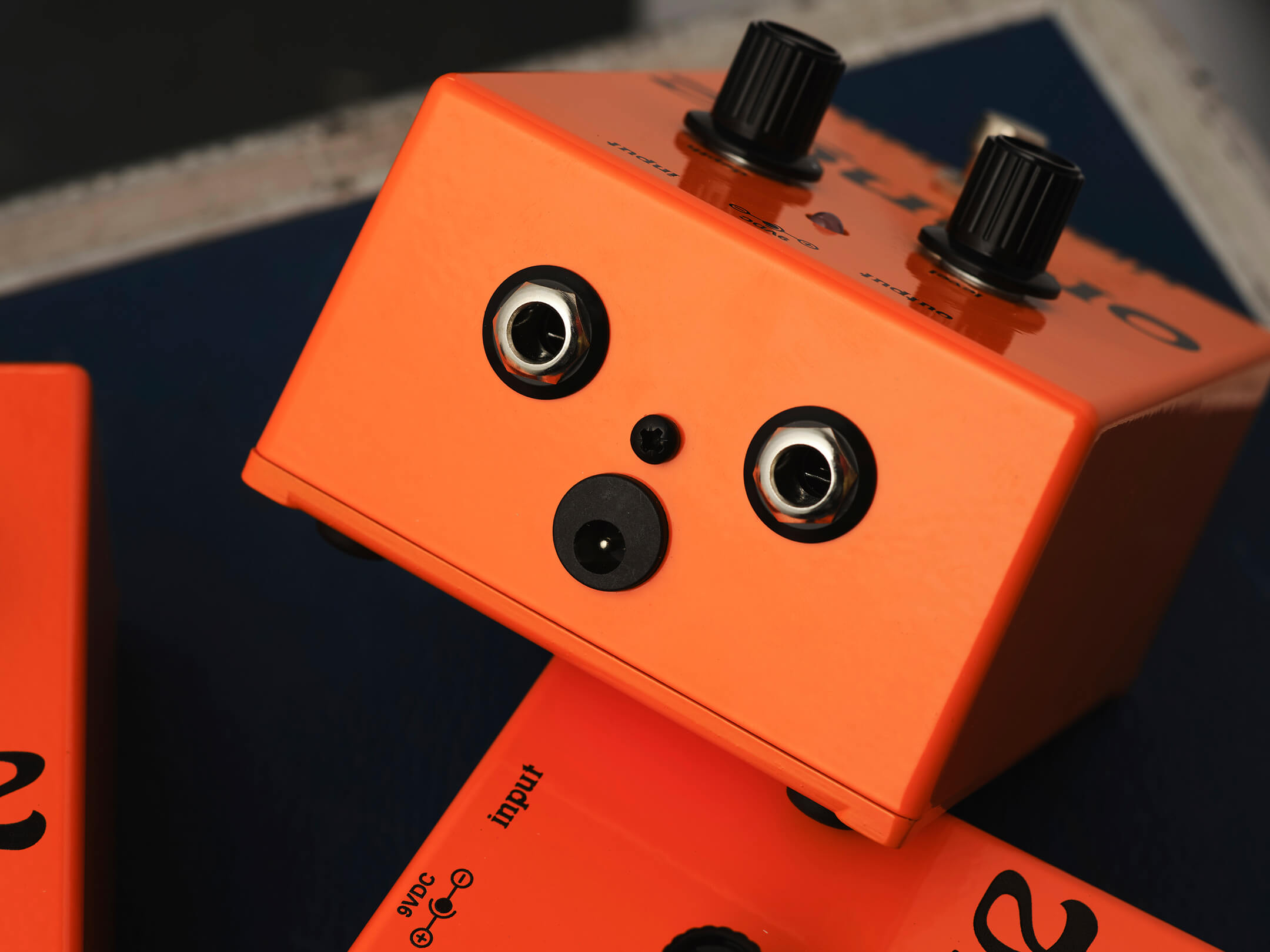 Who knows what the first guitarists to plug in a phaser must have thought of its unique sound, but as you’d expect here your guitar sound swirls and wobbles around the room in a beautiful mix of Doppler effect and sheer bonkers, it’s addictive, very musicals and hours of fun to play!

If you play in a band and sometimes find your lead lines getting a bit lost, try a single slow phaser setting, we find subtle movement and associated EQ modulation really helps lead lines breath and jump out of a mic in a more characterful way that simply adding yet another stage of gain to your tone. Up the rate and things quickly get psychedelic in the best way.

We have to commend Orange for being, well, typically Orange with the release of these eccentric pedals – because it typifies everything that makes the modern company a success. Once again they’ve taken something from the brand’s very unique and very British history, and tweaked it to create something new that perfectly suits modern musical tastes – and with not a menu or companion app in sight!