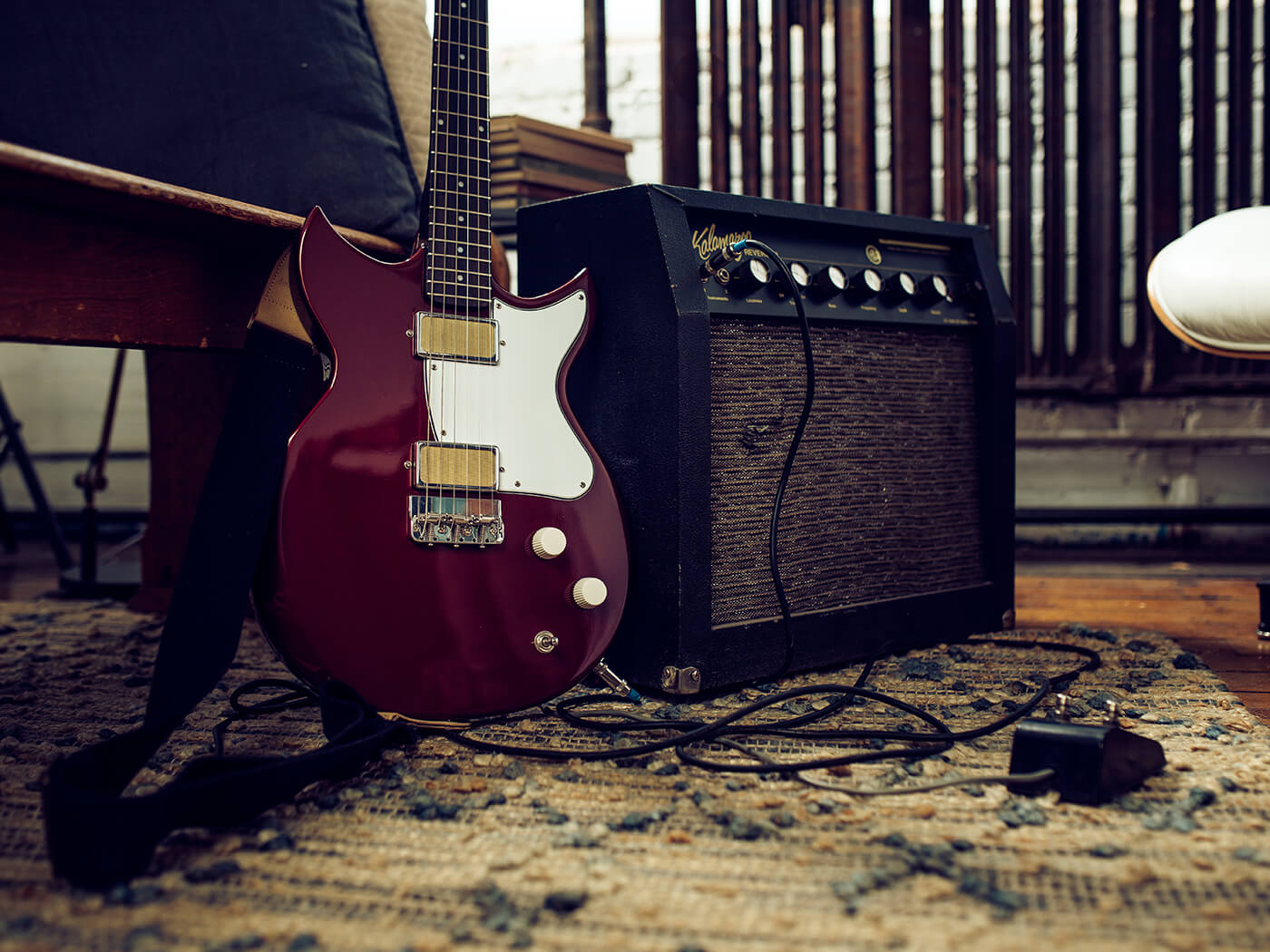 Through the 1950s and 60s and into the 70s, while manufacturing more instruments than any other maker on the planet, Chicago-based Harmony cranked out several affordable models that suited not only beginners, but everyone from punks to bluesers to grunge-y garage-rockers as well. Soon after, though, the brand slipped its American moorings to be bounced around through several owners, before fading from the market entirely.

Now under the ownership of BandLab Technologies – which has also acquired Teisco, Mono and Guitar.com, and is a partner of Heritage Guitars – Harmony has relaunched with three new models in the Standard Series. These are manufactured back in the USA at 225 Parsons Street in Kalamazoo, Michigan, an address redolent of guitar-world nostalgia as the original and golden-age home of Gibson Guitars.

From the debutante trio of Jupiter, Rebel and Silhouette, we have the former two for review here. The many similarities between these two bolt-neck solidbodies mean we can cover most of the common specifications in the first go-round with the Jupiter, while following up to touch upon the Rebel’s individuality in some detail.

While these Harmony models carry names from originals of the 60s, they are certainly not slavish recreations of such. Body lines pay homage to their namesakes, for sure, and other cleverly stylish touches tie in the aesthetics across the 50-plus-year chasm, but each guitar is a thorough reimagining of its predecessor, encapsulating a dollop of the catalogue cool of the original, while rendering the whole as a roadworthy, toneful, and supremely playable pro-stage-capable electric guitar circa 2020.

It would be easy to label this single-cutaway entrant as the 50s LP Special of the line-up, if we were looking for classic touchstones (which might lead us to call the Rebel the SG and the Silhouette the Firebird), but this Harmony model is quite different from the Gibson workhorse that was once manufactured in the same premises. Like its siblings, the Jupiter is a 25-inch scale-length guitar, making it a little longer than the originals, with both body and neck carved from solid mahogany and joined together with three wood screws in recessed cups. The body has both forearm and ribcage contours for enhanced ergonomics and sits comfortably, both on the lap and the strap.

The neck is carved to a medium ‘C’ profile in an acknowledged bid to appeal to a wide range of playing tastes, with a contoured heel carve that eases upper-fret access. Its natural finish reveals an appealing grain, while the 1 11/16-inch width across the bone nut and 12-inch curve of the unbound ebony fingerboard leave plenty of room to explore the 22 well-dressed medium-jumbo frets 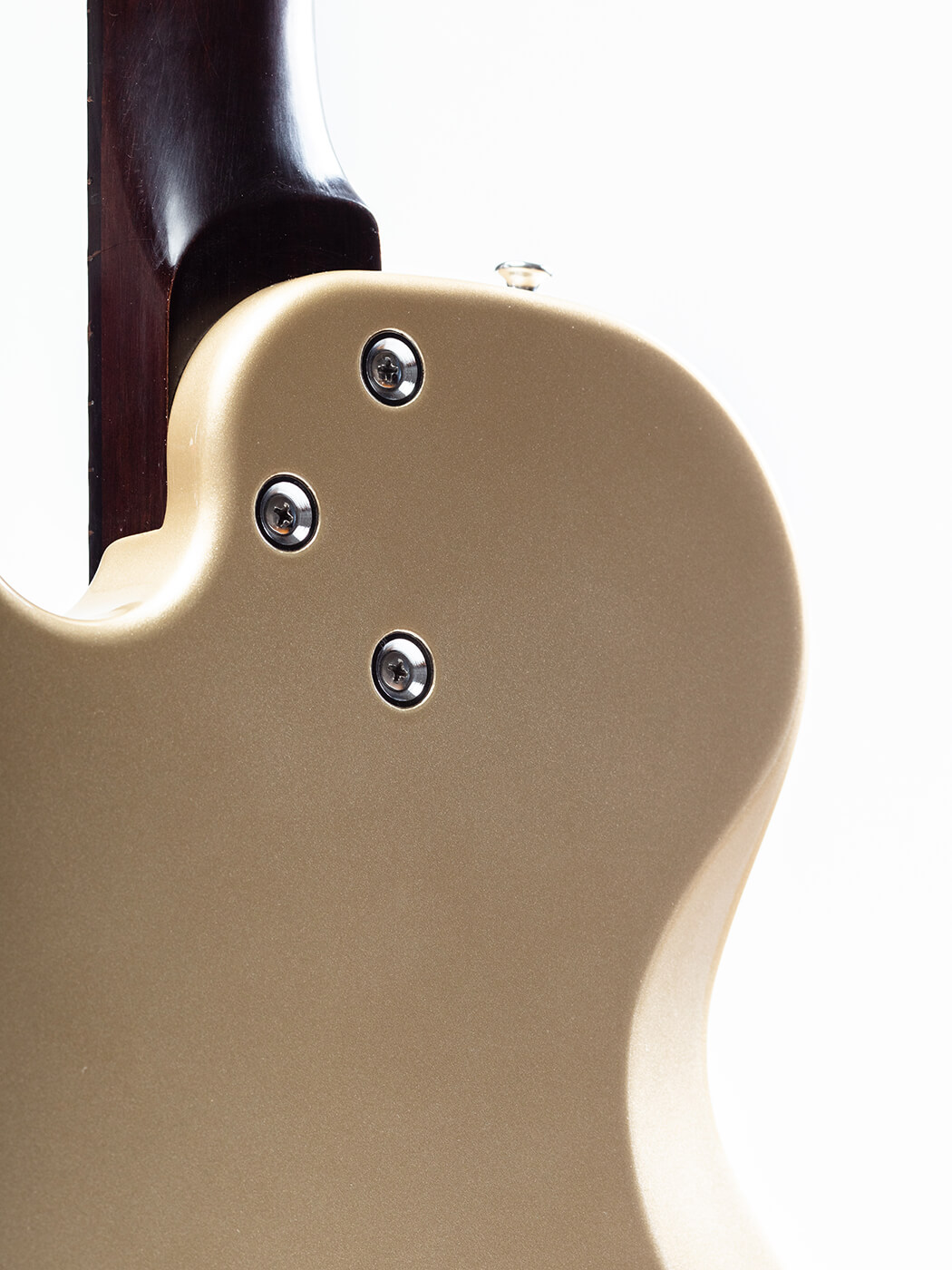 Clearly fresh off the line, the Jupiter emerged from its Mono Vertigo gigbag – included, and a significant bonus – still perfumed with the heady nitrocellulose finish with which it was sprayed (so much so, we were likely a little dizzy while typing this). Our review sample sports the Champagne finish, one among three options, with white cupcake control knobs and white three-ply pickguard. All in all, it’s beautifully executed.

Hardware includes a chopped-T-style bridge with through-body stringing across compensated steel saddles and three-a-side locking tuners up top. It’s the pickups that should garner the most attention, though: a pair of custom, USA-made Gold Foil humbuckers, designed to capture the spirit of the original single-coil DeArmond Gold Foils of the 60s, but without the hum or microphony. Measuring about 7.42K ohms DC in both positions, they are wired through a three-way toggle selector, with shared volume and tone controls.

The Rebel is the same in all aspects other than the double-cutaway body and the six-in-line headstock, along with the few necessities of design and appointments that accompany those changes. The lower bout is precisely the same as the Jupiter’s, but the upper bout flares out a bit wider just after the waist to allow for the broad dual-horned spread. This one comes in Harmony’s Burgundy finish, though we’d amend this luscious deep-red hue to ‘Atomic Reactor Raspberry’. 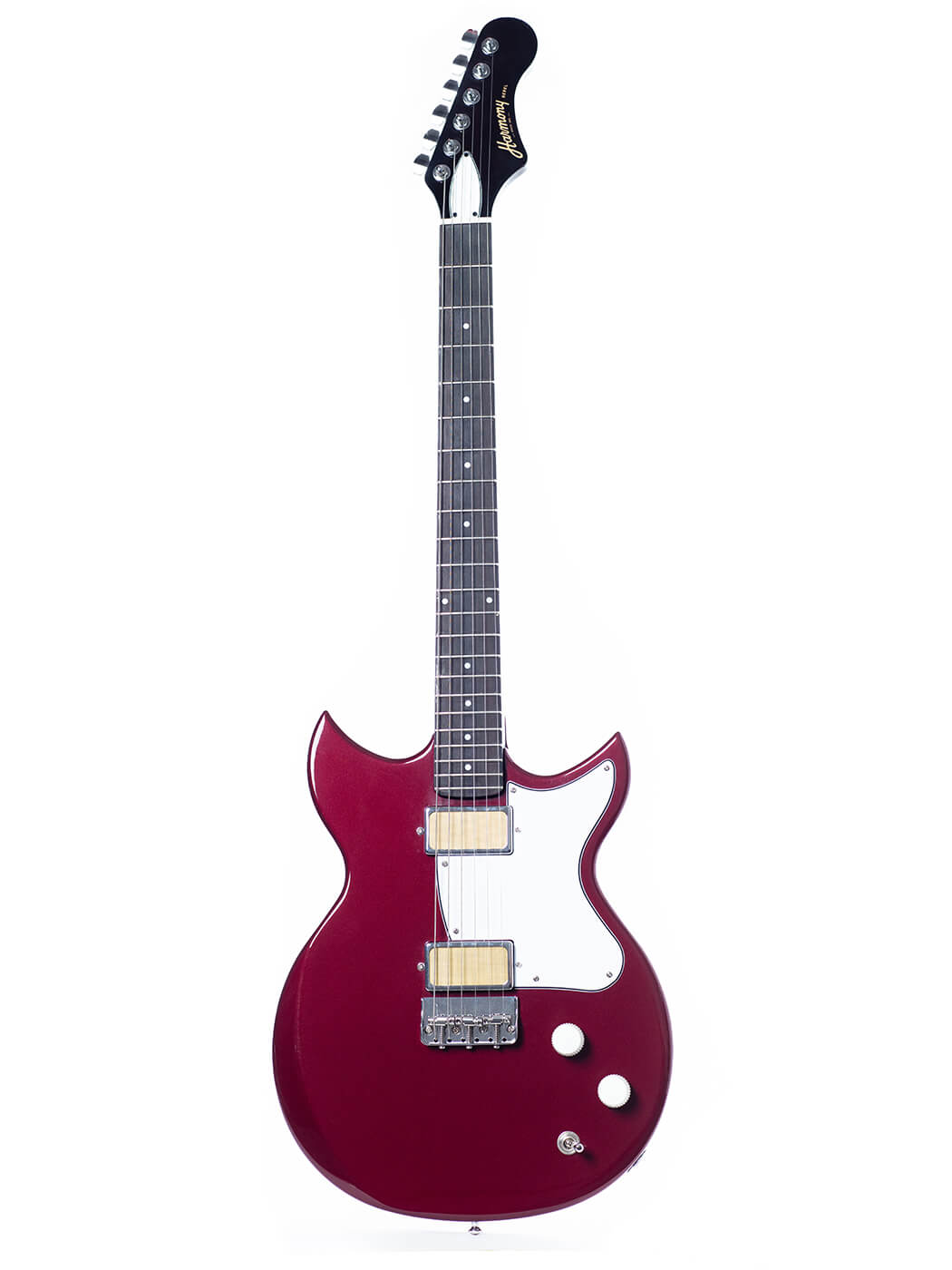 Despite being 97.3 per cent the same as its sibling, the Rebel has a somewhat different playing feel, particularly when strapped on. The location of the forward strap button behind the upper horn shifts the entire playing position further leftward of the guitarist, requiring more left-arm extension, and also inducing some neck-dive when you lift away that hand. Lacking the Jupiter’s contoured heel (clearly deemed unnecessary), this deep double-cut design doesn’t really offer any better top-fret access than its sibling. The Rebel’s other distinguishing characteristics reveal themselves in the playing, so let’s dive in.

The Jupiter is a comfortable guitar in the hands and the neck shape is easy to like, although we do find the transitional edge from the rounded-‘C’ back profile over to the fingerboard to be a tad sharp, if not offputtingly so (some rolled edges would have helped a lot there). The guitar arrived with a confident low-action setup and both fretting and bending are a breeze.

Tested through a Friedman Small Box head and a 2×12 Germino cab with Celestion Greenbacks and a tweed Deluxe-style 1×12 combo, plus a selection of overdrive pedals, the Jupiter reveals an original and characterful voice that nevertheless applies easily to a surprisingly broad range of styles. Through it all, the guitar’s core has the snappy, vaguely funky response of a bolt-neck guitar with a flat neck angle, but the mahogany construction and Gold Foil humbuckers take that foundation well out of Fender-ville.

Somewhat to our surprise, given our experience with vintage Gold Foils, the Jupiter’s sonic personality when plugged in is predominantly warm and rounded, with a smooth, balanced thickness and less of the lively sparkle and chime we might have expected from this pairing of build and electronics.

On the bridge pickup, when played clean, that still translates to appealingly jangly arpeggios and fluid single-note runs that are utterly devoid of spikiness, though not much adept at country twang either, if you lean that way. The selector’s middle position scoops and lightens up the tone somewhat and is extremely appealing at that, while the neck pickup alone is unexpectedly adept at buoyant jazz excursions, as well as rich blues tones. Note that these aren’t particularly punchy humbuckers – they don’t push either amp’s front end much, so everything stays clean pretty far up on the dial.

Through either the Friedman’s gained-up lead channel or a Wampler Tumnus Deluxe or Tsakalis Six overdrive inserted in front of the tweedy combo, the Jupiter exudes creamy, vocal-like lead tones which do exhibit just a bit of bitey, snarky, 60s Gold Foil character around the edges, but are otherwise surprisingly elegant and refined, though still adept at rocking pretty hard. Rather than the nasty, garage-y disposition of its vintage namesake, this Harmony is a semi-polite and surprisingly sophisticated performer and lots of fun in the process.

Similarly amped up, the Rebel throws out a few surprises, given its family resemblance to the Jupiter. In short, while core characteristics are broadly similar, this one displays more of the slightly raw, granular snarl that we expect to hear from Gold Foil-inspired pickups, which to our ears makes it a somewhat more compelling indie- and alt-rock warrior in the process.

A quick check reveals readings of 7.62K ohms from both units, which is a little hotter than the pickups loaded into the Jupiter (we suspect randomly so, since it’s no major disparity), but that shouldn’t be enough to account for the enhanced aggression and noticeably extra push of clean amp settings into early breakup. Either way, the Rebel lives up to its name in an aggressive, overtly attitudinal performance that helps to compensate for its shifted playing position and occasional neck-dive.