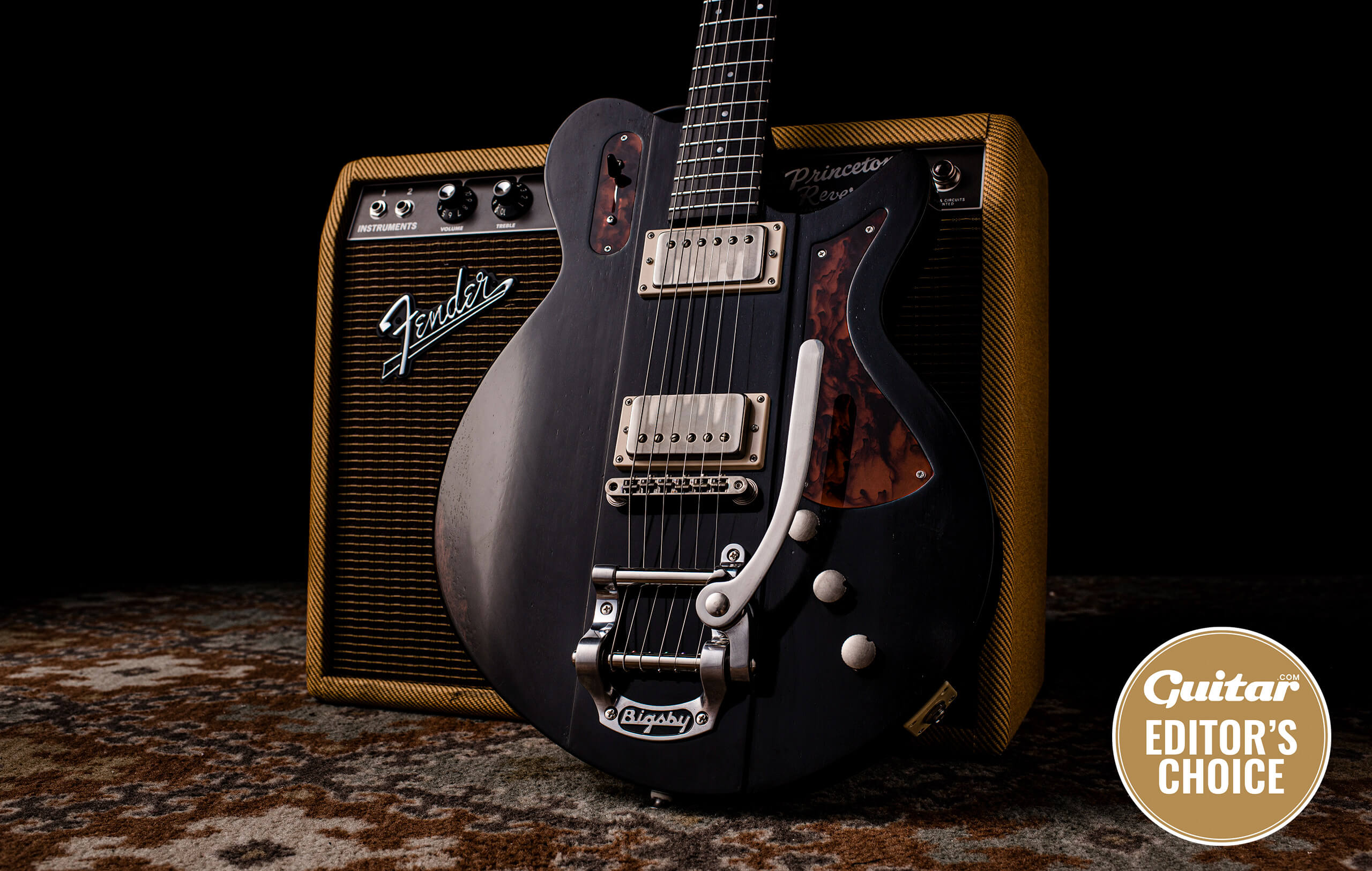 Parting with your cash is such sweet sorrow when it brings this bold new solidbody to partner Eastman’s excellent thinline Romeo model – but can it be as good?

A beautifully made all-round player that nails the essentials of high-end guitars costing way more.

Back in 2019, Eastman unveiled its first new in-house design, the Romeo: a handsome hollow thinline in a custom shade of Pelham blue. Now the Chinese instrumental powerhouse would twice disturb the quiet of our streets with this, a new solidbody model, and offer us two six-strings both alike in dignity.

The Juliet represents an important step for Eastman, as it veers gently away from beautiful vintage-inspired instruments and adds increasing spoonfuls of original thinking to its guitars – under the keen eyes of chief designer Otto D’Ambrosio (one of the world’s finest archtop luthiers, don’t you know!) and international product development manager Pepijn t’Hart.

Opening the lid of the hardshell case, we’re greeted by a brooding single-cut offset outline that is at once new and familiar. It’s a bit like a squished Fender Jazzmaster but with the raised centre of a Gibson Firebird and the quirky angularity of a Schecter Ultra. But perhaps comparisons with such instruments are less than helpful, as Eastman is clearly going for the boutique market with this design.

Seen in this context, the Juliet appears closer maybe to a Gustavsson – especially given the set-neck construction – while the raised centre feels very Ivison and the headstock (Eastman’s first six-in-line type) comes across as Fano-inspired with its two-tone look and stepped edges.

A further indication of Eastman’s post-boutique leanings is the application of a lightly-scuffed semi-transparent black finish over a cherry base coat. Although this sort of thing has now been going on for decades, there is still division over the desirability of a new guitar beset with scars that never felt a wound. The relic approach is certainly popular in the sole-luthier crowd, imparting as it does a level of mojo and gravitas that a factory-fresh paint job might not. That said, rumour has it an all-gloss finish is also in the pipeline.

In terms of hardware, the addition of a genuine Bigsby wobbler, a pair of Bare Knuckle BC Old Guard partially wax-potted humbuckers – all in battered nickel – and a Rothko & Frost inlaid tortoiseshell pickguard are the icing on an intriguing cake. The only thing lacking here is a chi-chi mismatch of original 1930s Bakelite knobs; instead we get a trio of serviceable knurled Tele-style numbers. There’s a shoulder-mounted three-way blade switch ensconced in more tortoiseshell and that’s it. No effete niceties such as coil-taps or roller saddles here.

Finally, the choice of okoume wood for the chamfered body and neck is worth noting. This wood is gaining traction in the electric guitar world and for good reason: it’s pretty lively, and we are forced to make the standard comparison to mahogany in both appearance and weight.

While it’s tempting to go straight in with the rage, we tease ourselves – and indeed you – with some clean sounds straight into a Carr Mercury amp. The results are impressive, especially on the neck pickup, which is nutritiously smooth and warm – so much so that we feel inspired to bust out our Ernest Ranglin dub-jazz licks and some neo-soul chordal goodness. Not only does the guitar respond immediately, but every note in the more complex harmonies comes through clearly and fades away gracefully too.

The in-between position is equally musical. There’s nothing mushy or indistinct going on here – it’s a sweet spot between the bite of a Fender and the warmth of a Gibson. Very interesting, and fantastic for arpeggiated chords with some smeary flange.

The bridge humbucker adds clarity and poke to clean proceedings, but we can already feel it straining on the leash – this thing wants to growl, and as soon as we dial up the gain on the amp we’re rewarded with a slab of throaty, aggressive, hairy-backed rock’n’roll that speaks to us on a very primal level indeed. It’s actually surprisingly Les Paul-like, with a delicious grunt to the front end of powerchords. The tone control only works on this pickup, so if things do get spiky you can calm it down. All hail the anti-Strat!

While the outline suggests this guitar might be the very thing for squalling indie-noise antics, the Juliet proves to be a well thought-out lead instrument too. No, the neck isn’t flat, wide or thin, the Bigsby is not going to give you anything more than an emotive tremble and the knobs are just a little tricky to reach thanks to that chunky vibrato unit and the raised centre of the body. But you can pull all manner of evocative melodic playing out of this instrument, across all settings.

It’s grippy enough for soaring bends and the detail is retained even when we apply the Biggest of Muffs to proceedings. Access to the very top frets is unencumbered thanks to an annoyingly elegant heel carve, the fretwork is good, and the relic’d finish gives an organic, tactile quality to the playing experience.… if you like that.

These Bare Knuckle partially wax-potted humbuckers are something of a revelation to us – as lovers of lower-output timbre and dynamics, they’re among the best we have heard. And if ’buckers are a little too much chunk for your funk, then rest assured the Juliet is also available with a pair of P-90s, taking it firmly into some very Special territory.

Much of the success of the modern boutique electric guitar industry has been predicated upon a deftly-judged combination of pawn-shop retro with exceptional build quality, ergonomics and sound. There has led to something of an arms race in the never-ending search for ‘cool’, with unlikely pickup combinations and unfriendly hardware being floated out in the hope that some of it might take off.

With the Eastman Juliet we have a thought-provoking example of the first part of that ethos, with none of the nonsense of the second.