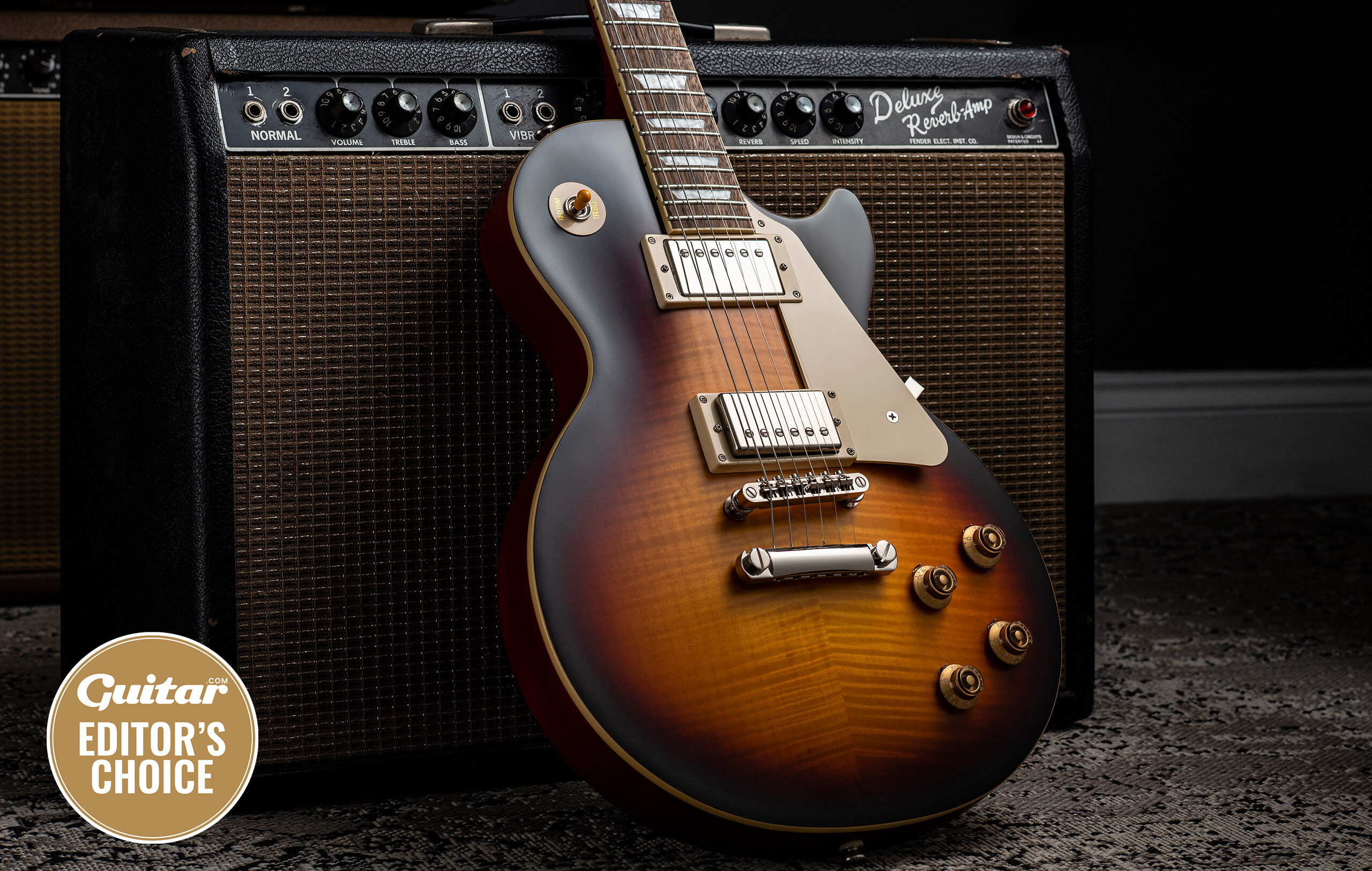 The Inspired By Gibson line has already raised the bar considerably but could this Custom Shop collaboration be the best Epiphone Les Paul yet?

Les Paul enthusiasts are all about the details. Perhaps more than any electric guitar subculture, its members will debate metal alloys, plastic formulations, neck joints and pickup specifications ad infinitum. It’s nerdy, for sure, and the average guitar player might understandably be indifferent to details such as switch tips and pickguard bevels. However, when it comes to the stuff that really matters such as tone and playability, getting the small things right can turn an ordinary Les Paul into a great one, irrespective of price.

The latest addition to the Inspired By Gibson range, Epiphone’s limited-edition 1959 Les Paul Standard is the first collaboration between Epiphone and Gibson Custom. Suffice to say, the result is a well-made Epiphone Les Paul of Chinese origin equipped with components and features you’d usually only find on American-made Gibsons.

The headline news is the choice of pickups. Though the ProBucker units on Epiphone’s regular Les Paul Standard 50s are no slouches and we found them hugely impressive on their debut in early 2020, this 1959 model has been fitted with a set of USA BurstBuckers. There’s a BurstBucker 2 in the neck position and a slightly hotter BurstBucker 3 at the bridge and both have unpotted coils and unpolished alnico II magnets.

“Under the hood, the controls are hand-wired 50s-style, with CTS 500k pots mounted directly onto the body and Mallory 150 tone capacitors”

Under the hood, the controls are hand-wired 50s-style, with CTS 500k pots mounted directly onto the body and Mallory 150 tone capacitors. There’s even a US-spec Switchcraft toggle switch and the only deviation from vintage specifications is the plastic-insulated multicore switch wire. However, we’re confident that this has no detrimental effect, and the enamelled metal switch cover denoting this guitar as a limited edition model is a classy touch. 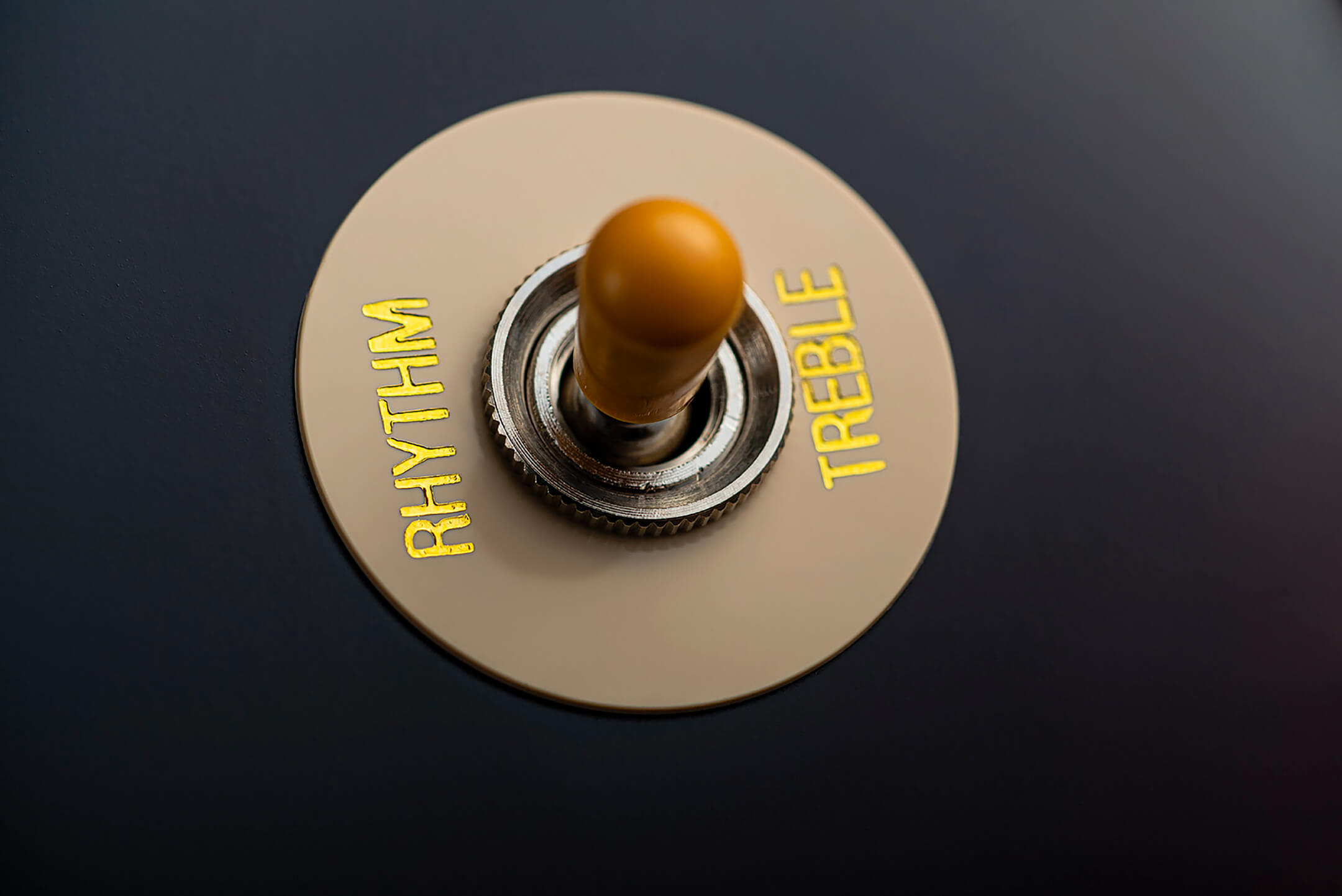 With the exception of the Indian laurel fretboard, the construction materials stick to the time-honoured recipe. The mahogany back is centre jointed and we’re pretty certain it’s a two piece, but the Cherry finish is too opaque around the edges to say for sure and it almost obscures the maple under the binding in the cutaway.

“The chevron figuring is attractive and the Aged Dark Burst is very well executed, but the jury is still out on the satin finish and some of the binding scraping is untidy”

The neck is mahogany too, with a vintage-style long tenon, a stacked heel and an interesting variation on a scarf joint for the headstock. The headstock wings are glued on after the main section of the headstock is attached, potentially strengthening the joint and concealing the scarf joint when viewed from the sides.

Although there’s a carved hard maple cap, as you’d expect at this price-point, the figured top is a veneer. The chevron figuring is attractive and the Aged Dark Burst is very well executed, but the jury is still out on the satin finish and some of the binding scraping is untidy. 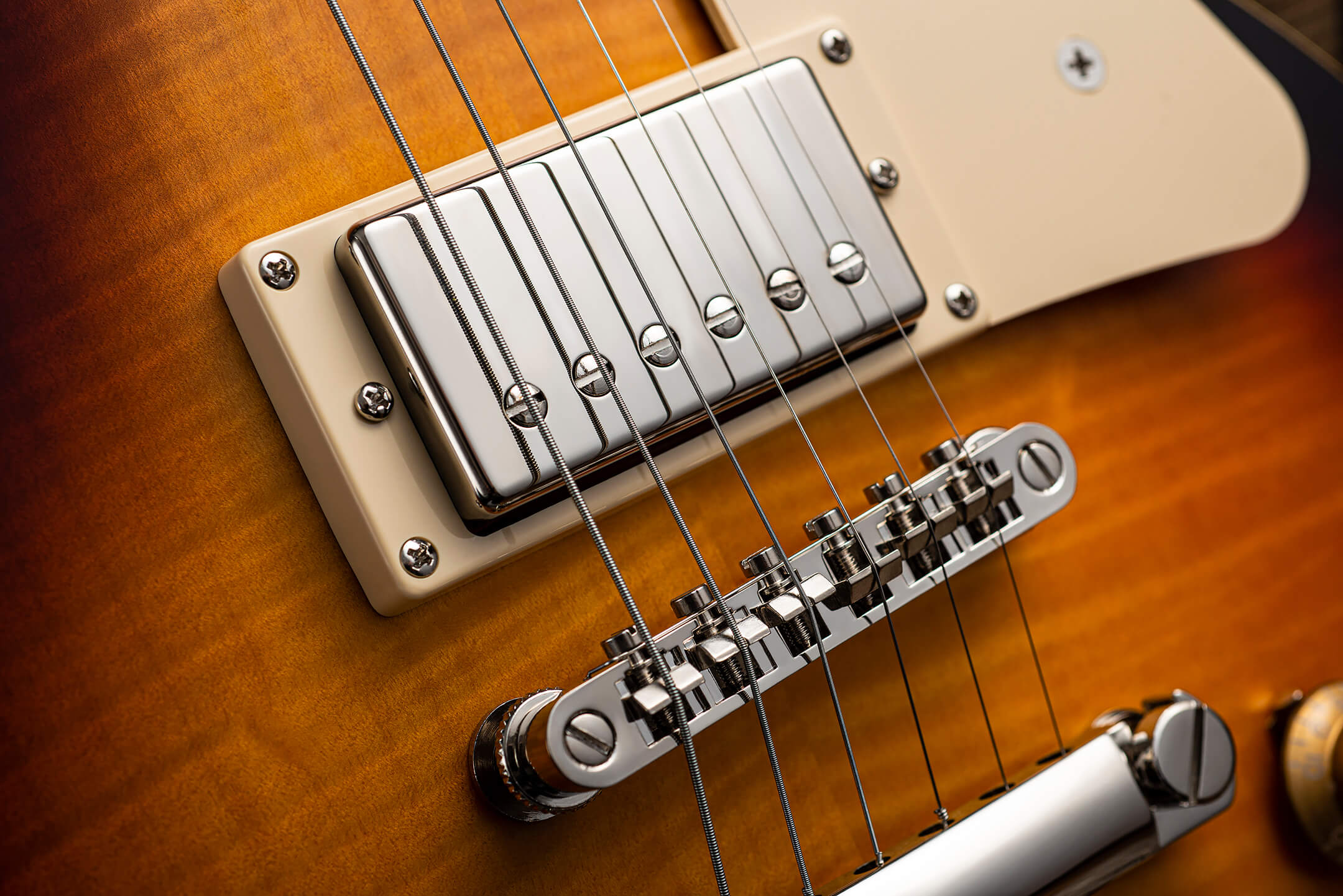 This neck is unequivocally on the girthy side and if you don’t like fat neck profiles, you’re not going to like this one. Happily, we feel the opposite about Les Pauls with vintage aspirations, and Epiphone deserves kudos for opting for a characterful carve with the potential to polarise opinion.

The profile differs from all the late 1950s Busts we’ve played; it’s a little squarer in the shoulders and, rather than a very subtle V, this is more of a deep C. On balance, it’s closer to the feel of a 1957 or ’58 Les Paul and, while not as refined as the real deal, it’s comfortable and enjoyable to play. 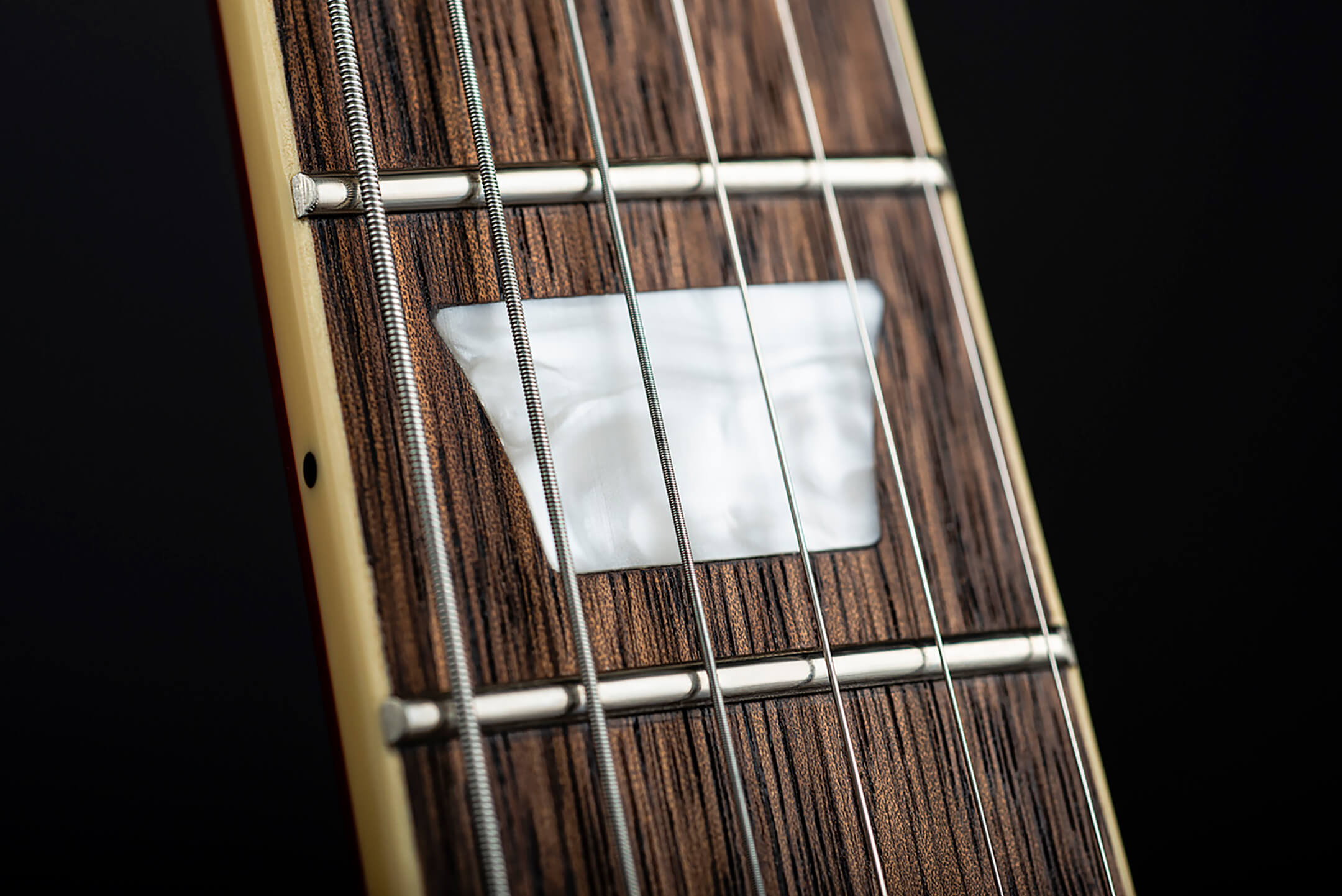 The overall weight of our review guitar is ideal too. For comfort and tone, we prefer Les Pauls to tip the scales somewhere between 8.5-9lb, and this example is bang-on. It’s not a hard and fast rule and there are always exceptions, but when Les Pauls are too heavy, dynamics can be compromised, and when they’re too light, there can be a detrimental impact on definition and sustain.

“For comfort and tone, we prefer Les Pauls to tip the scales somewhere between 8.5-9lb, and this example is bang-on”

Clearly this Epiphone is in with a fighting chance, and it immediately exceeds expectations. The unplugged tone has a clear yet mellow voice and plenty of woodiness, but the characteristic that really excites us is the extraordinary sustain. 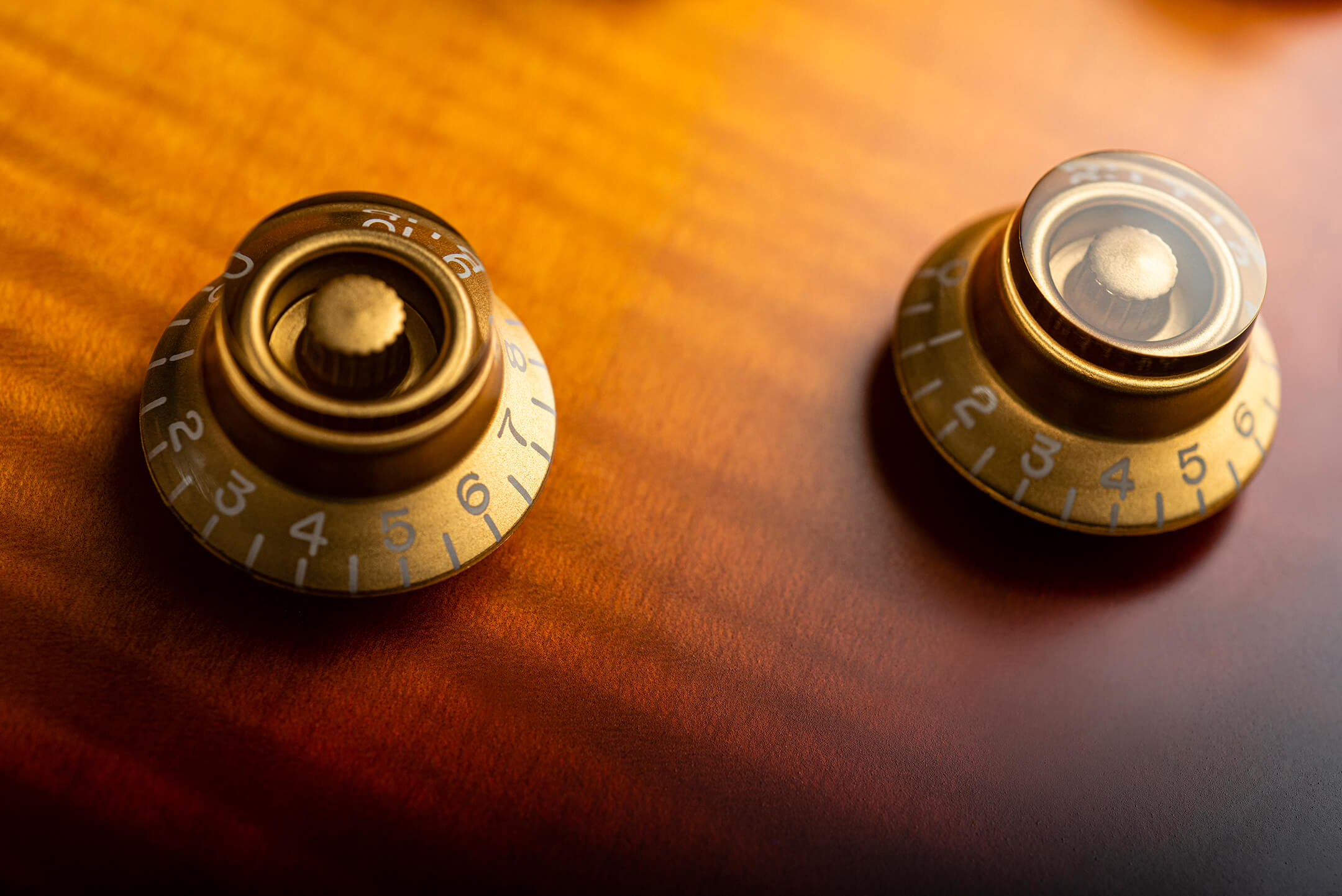 We begin our amplified testing with clean settings on our Princeton-style Rift PR18 and the BurstBuckers easily capture the guitar’s inherently woody tones and epic sustain. With their slightly mismatched coils, these pickups are certainly PAF-flavoured, if somewhat veiled in their treble response. With the BurstBucker 2 and 3 combination, you also get a pleasing contrast between the neck and bridge settings.

The bridge is fatter, louder and more aggressive. There’s defined attack, a hint of nasal cocked-wah through the mids and decent sensitivity. Over on the neck position we get a rounder, softer and clearer tone. There’s no shortage of power and its naturally louder location makes it easy to balance it with the hotter bridge unit.

A distinct middle setting tone usually distinguishes really good dual-humbucker guitars from those that are just ordinary, and again our Epiphone impresses. We hear the phasey quack we always look for, and notching back the neck volume very slightly accentuates the effect – just as we would expect from a vintage Gibson. 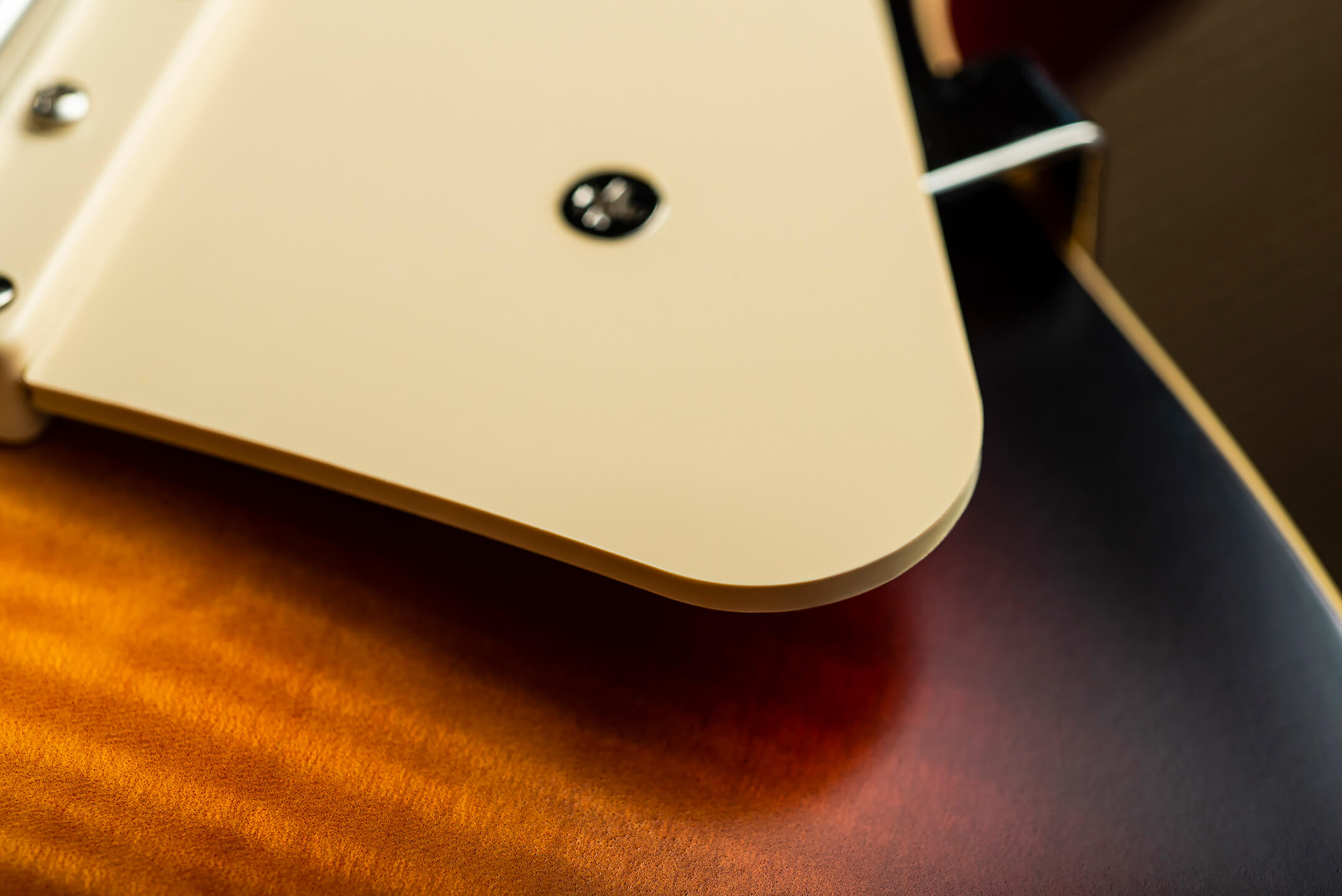 The potentiometer and tone capacitor upgrades here pay dividends when it comes to responsiveness and effective sonic shaping. The tone controls have a very wide range and accurate feel and overdriven tones clean up without losing clarity. 50s-style wiring is such a minor detail, but it’s bafflingly rare to see it done authentically.

In a Marshall mood, we fire up Universal Audio’s fantastic Plexi Classic plugin and things start to get heavy. The BurstBuckers cut through the crunch and our review guitar establishes beyond doubt that it’s a serious Les Paul. It’s also a welcome reminder that BurstBuckers still hold their own – we actually prefer them to some boutique PAF replicas we’ve tested. 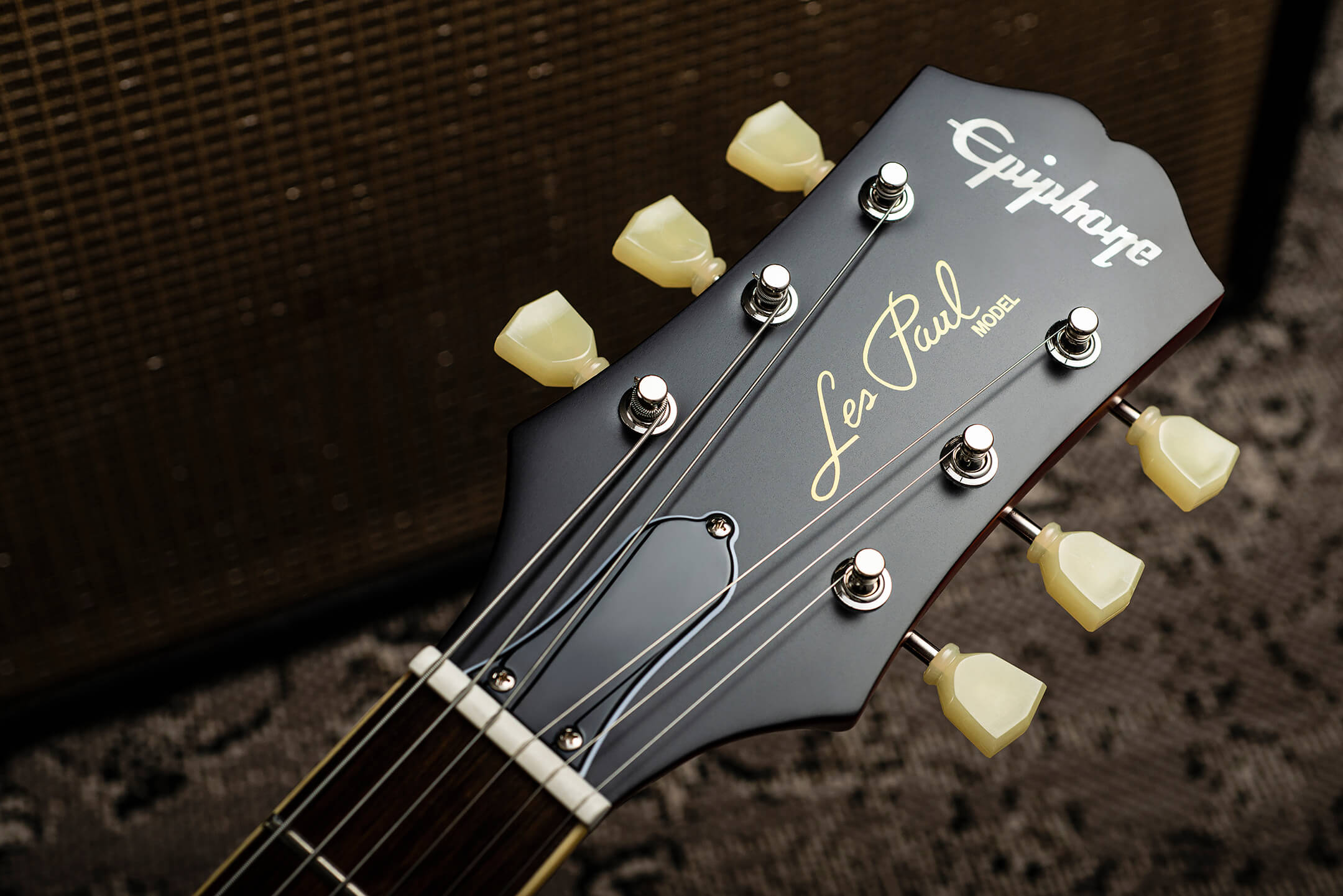 Epiphone’s 1959 Les Paul Standard has tonal depth, singing sustain and a wide range of tones. The controls work as they should – which is no small thing – and it’s a delight to play. We have minor cosmetic concerns, but when you factor in the specs and the pink-lined vintage-style hard case, it’s a very tempting package.

At £200 less, the Inspired By Gibson Les Paul Standard 50s still comes highly recommended – especially if you prefer a gloss finish – but buying one and upgrading it with a set of BurstBuckers and a quality hardcase would end up costing more than the 1959 model. 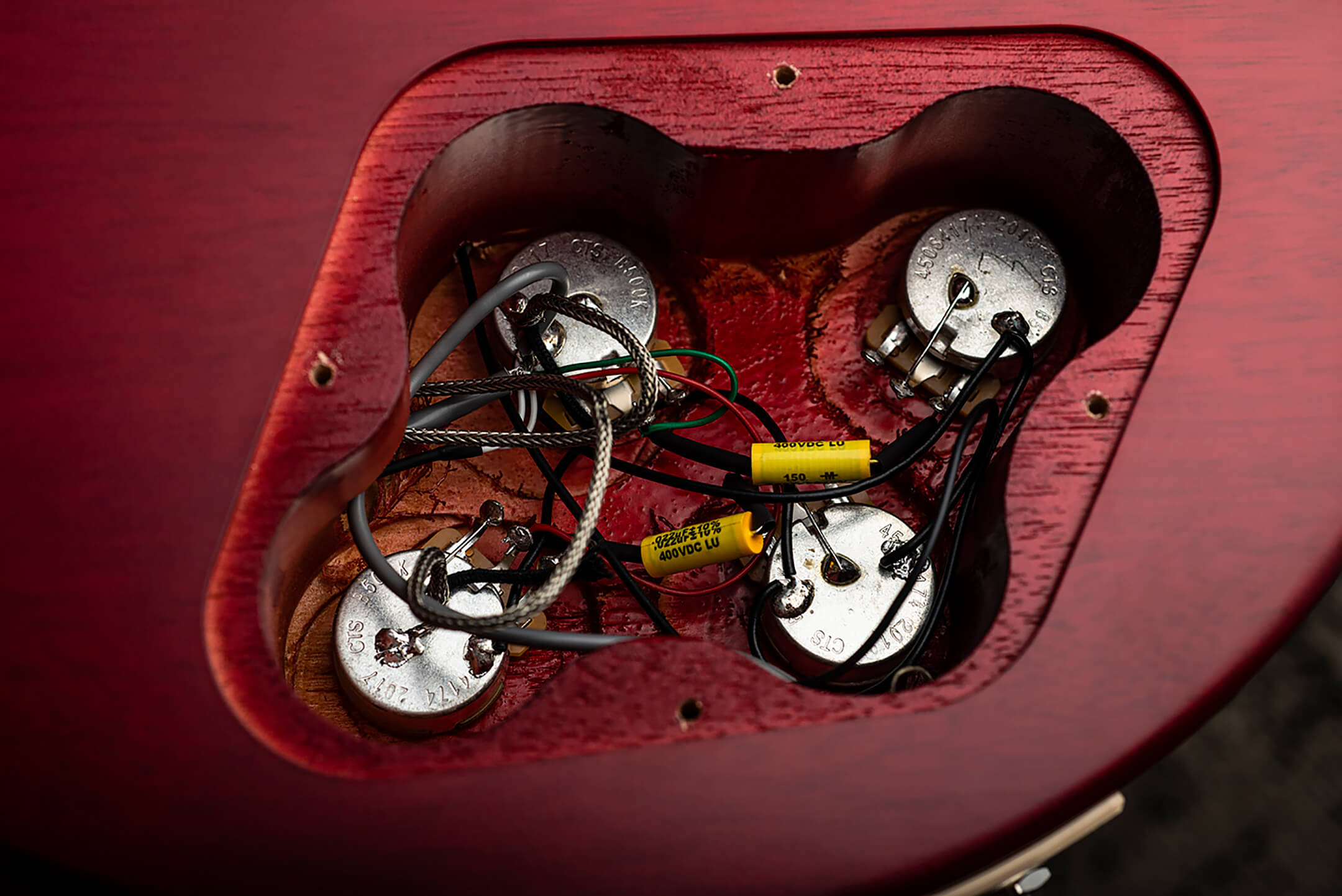 The ’59 also seems like a smart purchase when you compare it to what’s available at the most accessible end of the Gibson USA catalogue. The stripped-down, humbucker-loaded Les Paul Special Tribute is £899 but the entry level carved top model is the Les Paul Tribute (£1,099). The latter has a satin nitrocellulose finish, faux body binding, ultra-modern weight relief, 490 pickups, a maple neck and a premium soft case. In comparison, Epiphone’s 1959 Les Paul Standard offers more vintage-accurate specifications, higher-spec electronics and a more robust case, leaving you with enough change to add an Inspired By Gibson Les Paul Junior to your collection too. Food for thought indeed. 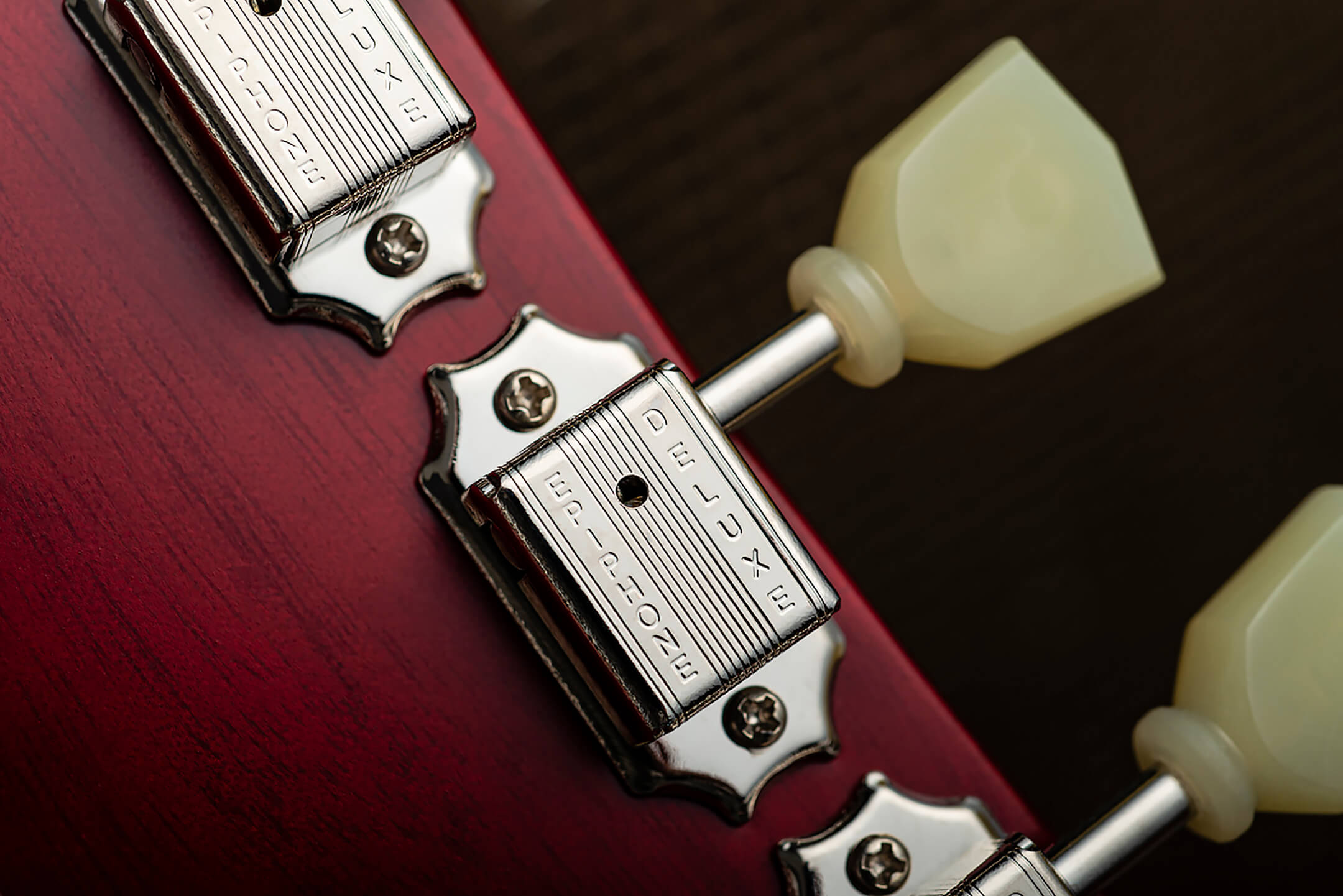