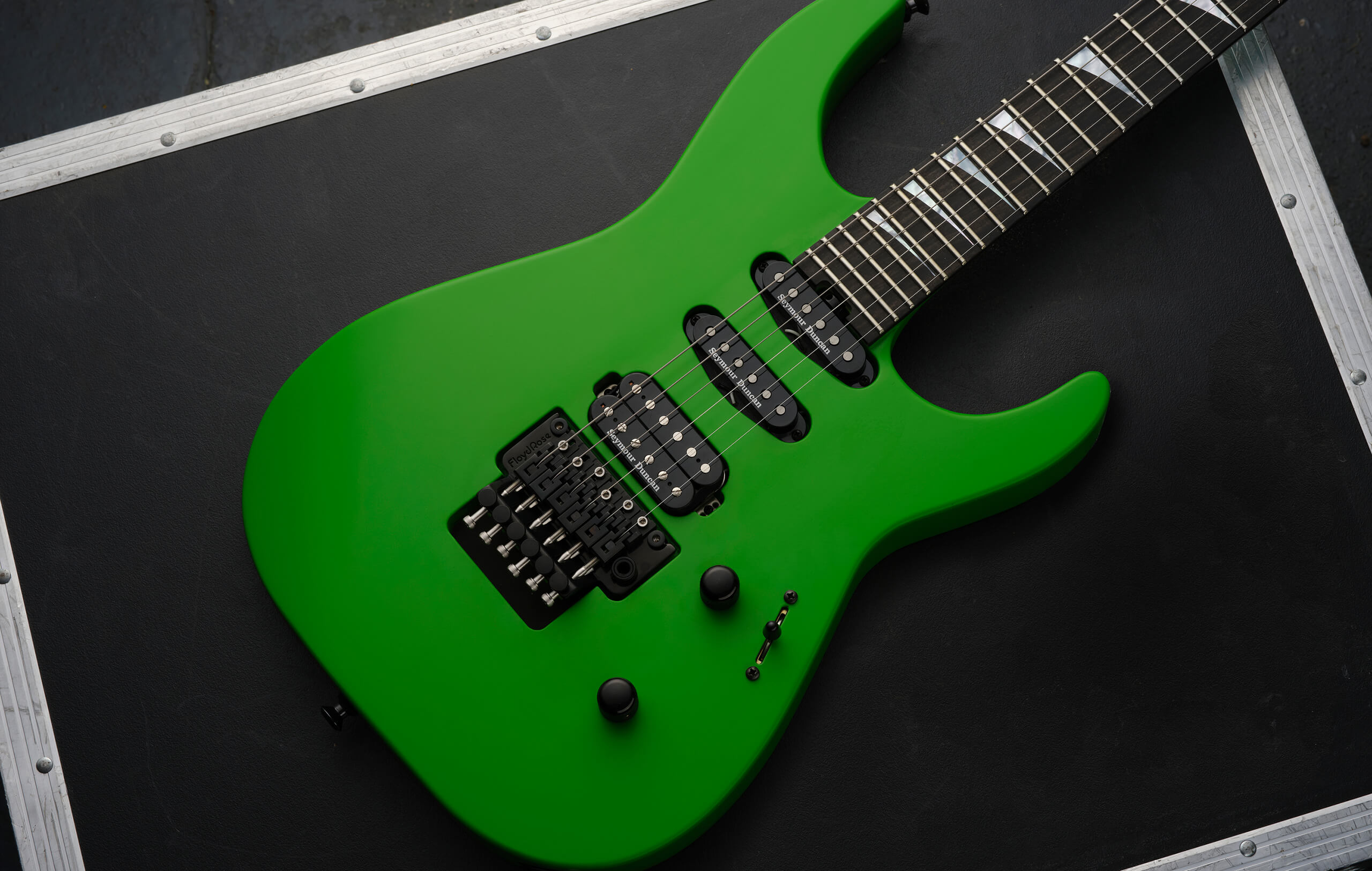 The Big Review: Jackson American Series Soloist SL3 – does this reborn icon reclaim its crown as the king of shred guitars?

“Fashion comes and goes; style goes on forever”, said fashion guru Yves Saint-Laurent. The USA soloist always had style but as it makes a return to guitar stores, market trends suggest that Slime Green shred machines are again in vogue.

The Jackson Soloist is a cornerstone of the brand’s iconic history and arguably the guitar that first catered for and best represented the emerging shred genre of the early 1980s. One of that generation’s key influencers was Randy Rhoads, who at the time was the new hotshot guitarist for Ozzy Osbourne. He represented a rising breed of player that demanded more ergonomic favour from guitar design; including improved access to the upper reaches of the fretboard. It was Rhoads’s collaboration with current Senior Master Builder Mike Shannon – one of Grover Jackson’s original employees in the heyday of Jackson SuperStrats – that resulted in the late guitarist’s offset Concorde V.

Shannon saw the birth of all the classic Jackson models and designed the original Soloist – borne out of an idea to soup-up the bolt-on 22-fret Dinky model by making a 24-fret model with through-neck; a construction feature few companies offered at that time. It’s a guitar design that has been copied many times since and one that he’s obviously proud of as, along with Fender CEO Andy Mooney, Shannon is at the forefront of this new American Series launch. 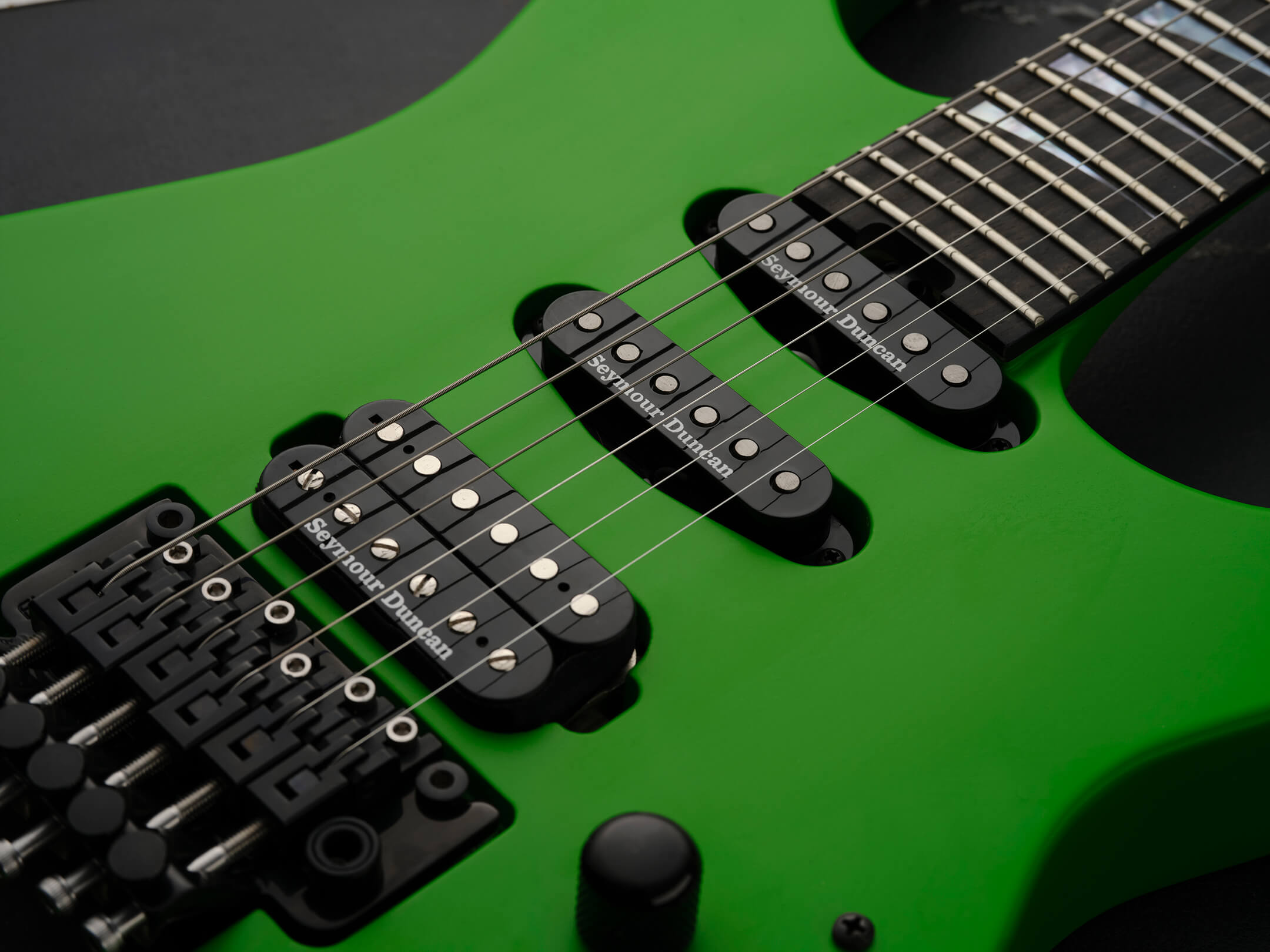 So, almost 40 years after the first USA production model was created, and many subsequent years being produced outside of the US, why return Jackson back to its roots in California? “We’re moving everything back in time to bring Jackson guitars back to the USA to really appeal to this generation of metal players, and it is a much broader, musically diverse group of players than in any time in history,” explains Mooney. “The virtuoso guitarist is alive and kicking!”

There is heavy investment behind this new USA Soloist line, not only in the marketing campaign but also the manufacturing side as it has its own dedicated production line in the Corona factory. “I think the challenge of Jackson in terms of Corona is this will be the first time that they’ve made neck-through-body guitars,” says Mooney. “We’re confident we can do that; we’ve done all the work to ensure that we can build the guitars at quality and at scale.” 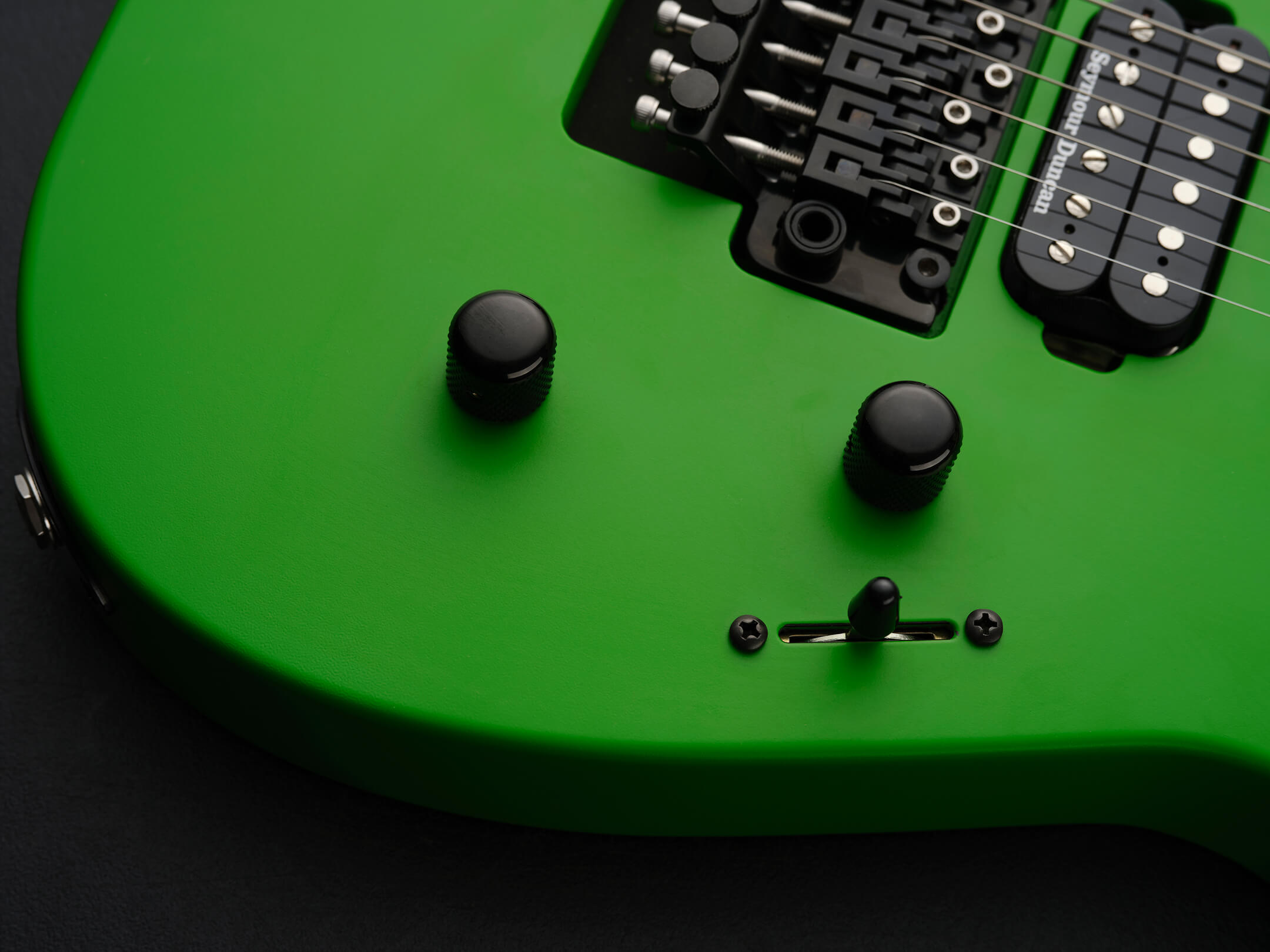 A cursory glance at the Soloist’s specs provides a reassuring box-ticking exercise for the contemporary technical player: a compound 12” – 16” radius to ensure low action and unchallenged string bends, nickel silver jumbo frets, rolled fingerboard edges for enhanced comfort, and the Soloist debut of Luminlay side dot markers for optical optimisation on dark stages.

The other most obvious visual difference to Soloist tradition is the omission of binding. A decision that Jackson says allowed it to establish more effective rolled fingerboard edges. The volume knob has also been moved a little further away to make it a more elusive target during wilder strumming. And like all self-respecting contemporary shred machines, the truss rod adjustment has been moved from the top of the neck to the bottom with a wheel adjuster. 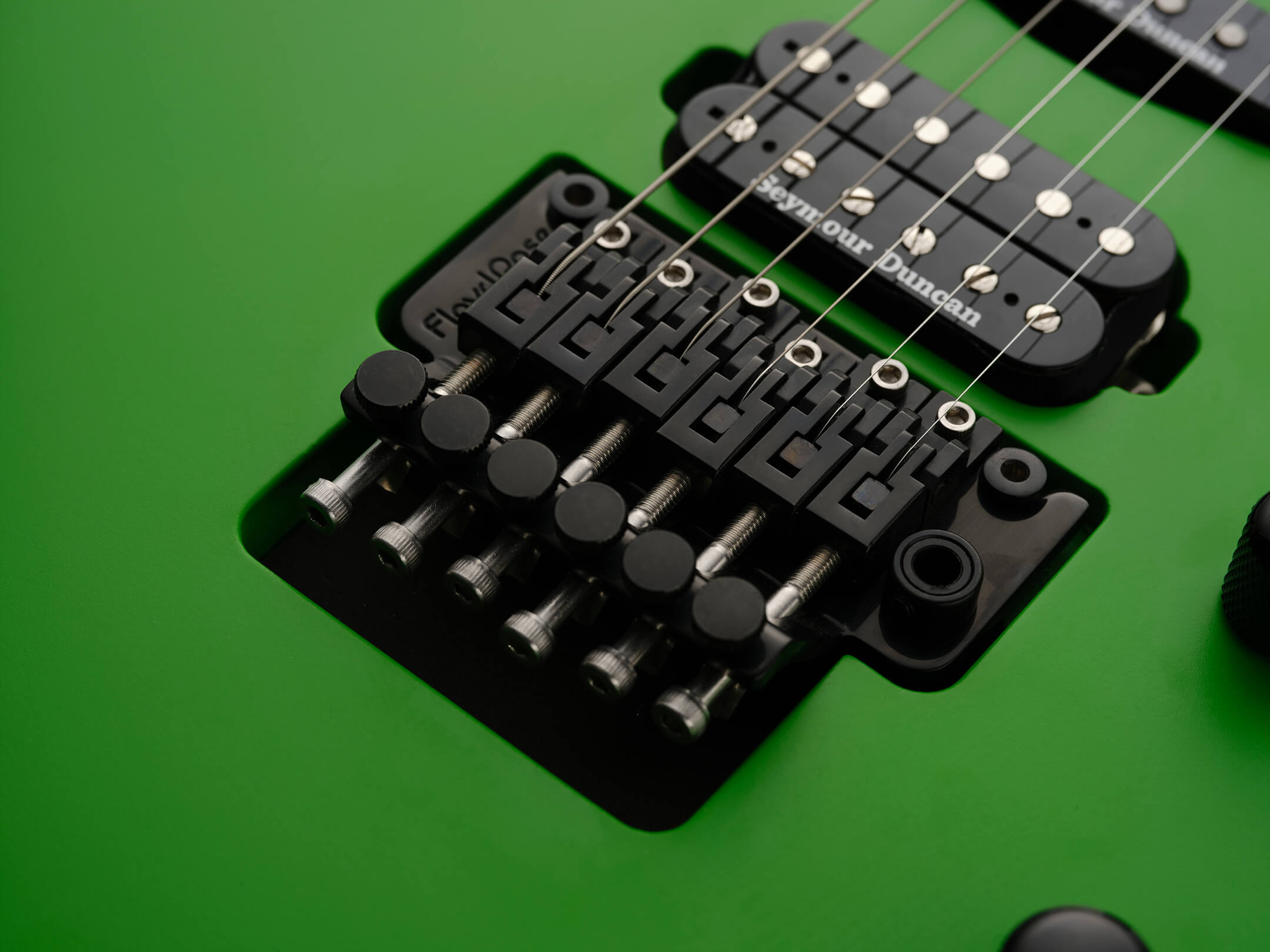 Many of the features highlighted thus far are pretty standard fare on contemporary high-end heavy rock and metal-leaning guitars. However, these appointments are fused with what is essentially the pièce de resistance of shred guitar; the through-neck, and the American Series Soloist goes to town here with a three-piece neck that begins at the headstock and runs through the entirety of the body; so there’s no scarf joint required.

It’s the sumptuous moulding of the area where the neck meets the body that provides the true advantage for the technical guitarist, and here the juncture is so smooth as to be non-existent. Its impact is significant because not only can we access the upper frets but we can also find a comfortable playing position here thanks to the absence of a large heel. 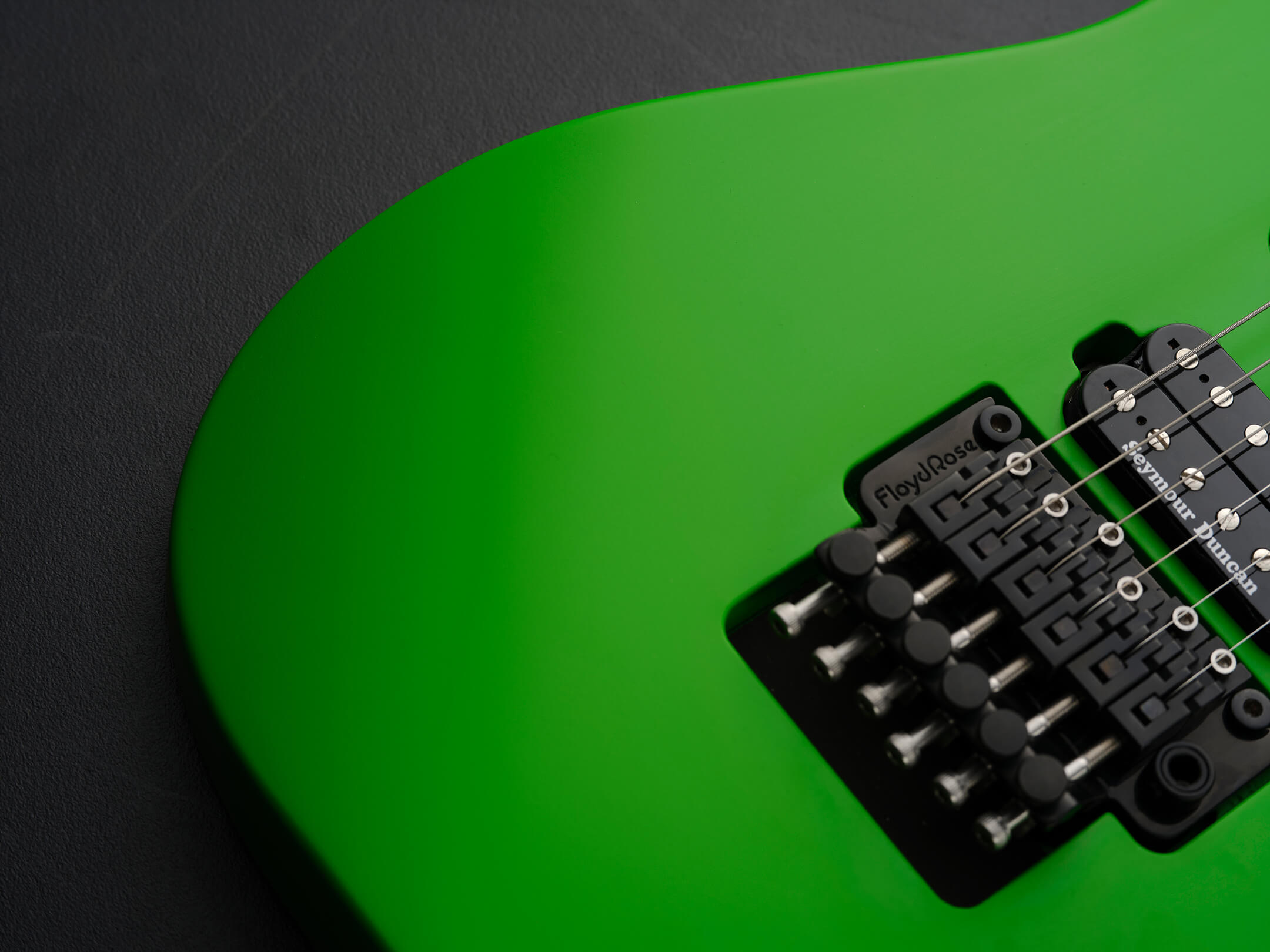 The back of the neck is finished the same colour as the body and as expected, it is very slim, harkening back to the days when guitar companies saw it as a challenge to create the thinnest neck possible. A slim neck isn’t necessarily a prerequisite when it comes to fast playing in our view – just look at the Malmsteen or Satriani signature guitars with both round and fulsome neck carves – but where the Soloist’s neck encourages speed for us is that the most comfortable position for your thumb is behind the neck. A position where we’re often at our most technically adept. 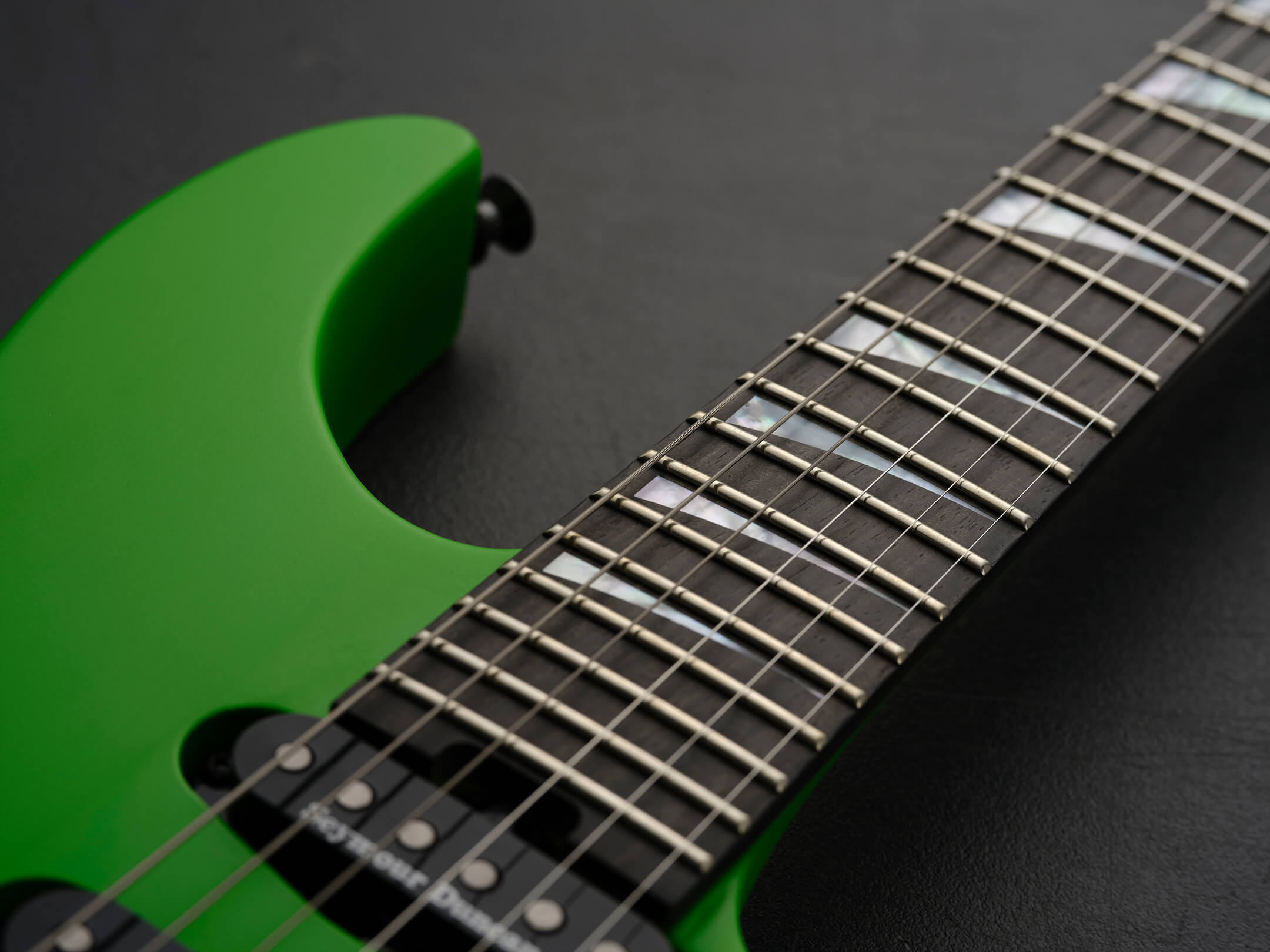 The original Soloist offered a choice between the Kahler tremolo system or Floyd Rose, but in terms of popularity the latter eventually emerged as the victor in this notorious battle, and the Floyd Rose 1500 series is as dependable a double-locking system as you will encounter right now. While as tedious as it can be to maintain and restring a double-locking system, there isn’t a tremolo that comes close to providing stable tuning in the face of strenuous abuse, and we easily achieve a full three tones uplift until the strings begin fretting out at the end of the fingerboard. 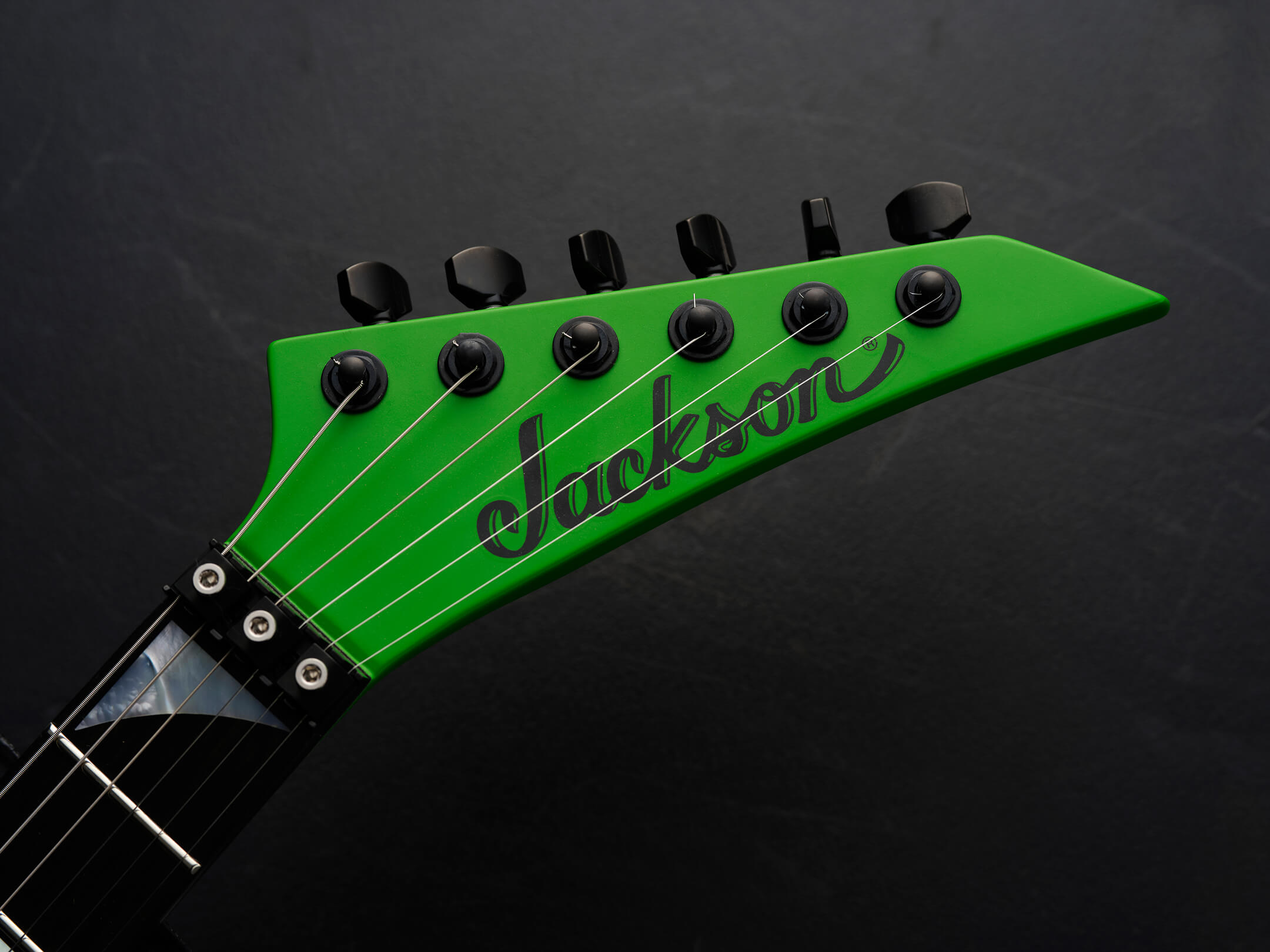 Through a heavily overdriven amp setting on the bridge Seymour Duncan TB-4 humbucker (the Trembucker-spaced version of the iconic JB model designed for a trem guitar), there’s a brashness to the tone that fans of 80s power metal will recognise and cherish. It’s a fulsome tone that helps palm-muted rhythm riffs chug and slice through anything in their path, with the ebony ‘board and alder wings no doubt providing extra brightness augmenting the already mid-rich TB-4. It’s instant Anthrax tone and for old school thrash aficionados, there simply is no other sound that comes close. It’s a joyous trip down memory lane. 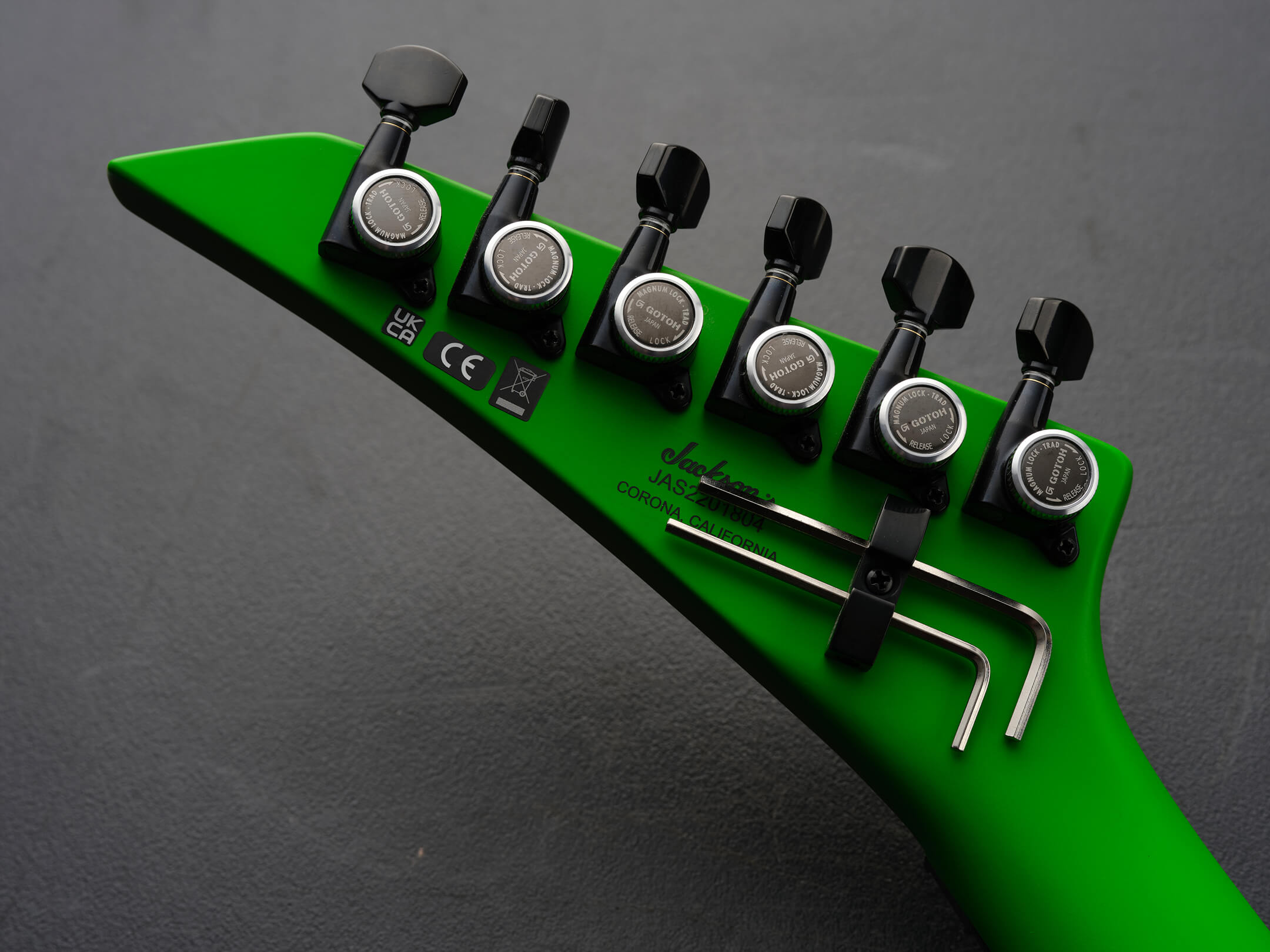 For solo work, we’re looking forward to taking advantage of the sustain famously offered by a through-neck construction. We aren’t disappointed, as when we compare with our PRS CU22 fitted with medium-high output humbuckers, the sustain of the Jackson was only marginally longer, but offered a more detailed and harmonic fulsomeness throughout the course of its sustain than the set-neck PRS.

There is a noticeable drop in gain when switching between the humbucking bridge and Seymour Duncan Flat Strat SSL-6 Single-Coil neck here, but the percussive tone offered in the latter’s solo character is something that is very on-trend with the current crop of prog-metal guitarists. Nevertheless, we do miss the creaminess and power of a neck humbucker for solo lines. 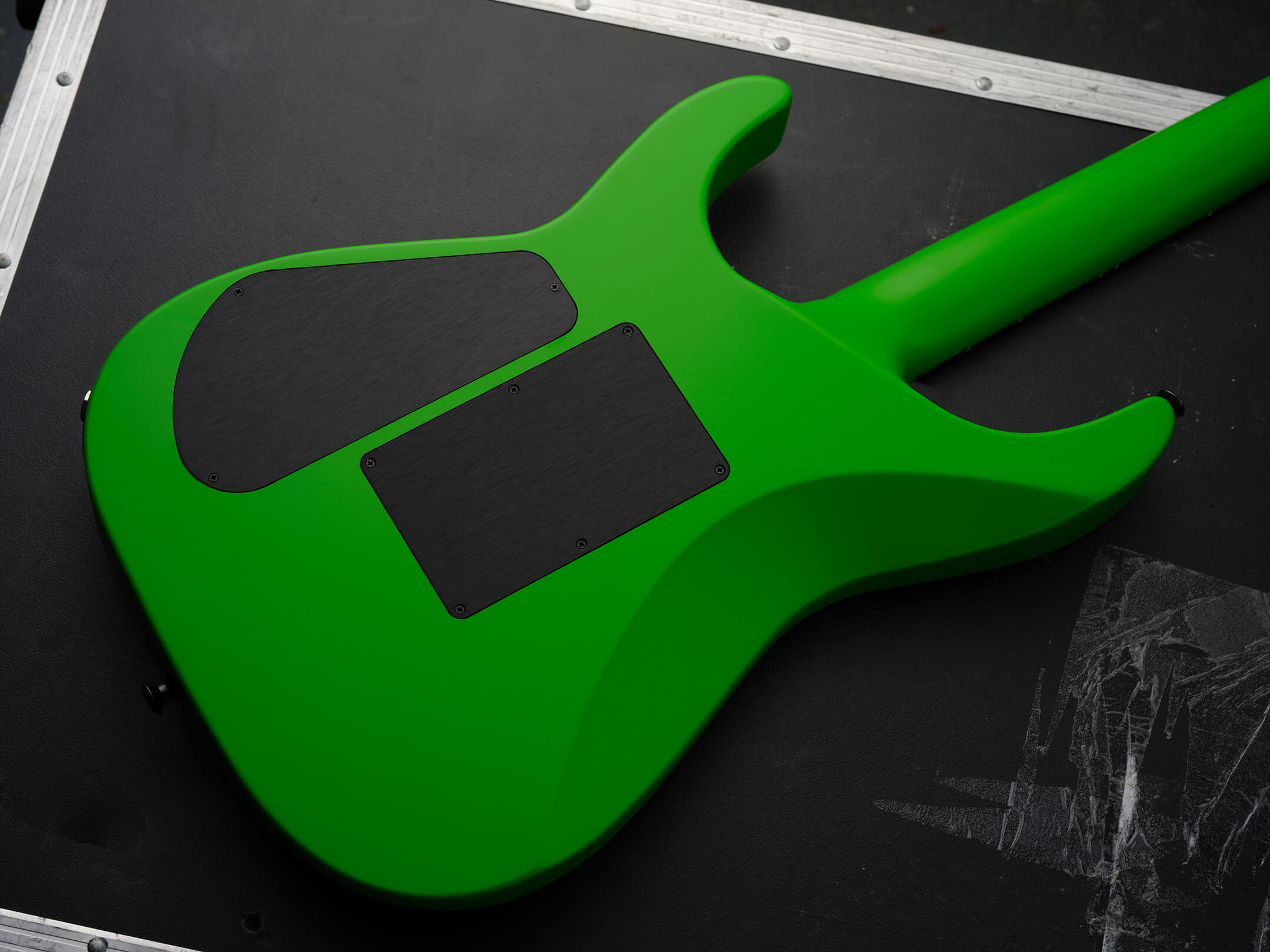 The virtuoso guitarist is alive and kicking indeed, but not all of them will be aware of the impact the original Jackson Soloist had. It’s one which begat many copies and provided a template for shred guitars that followed, until the change in the musical landscape that came in the late 80s and early 90s. And 40 years after its original launch, it’s still the benchmark of playability against which many others are measured.

The ease of traversing the entire length of the neck at speed completely unhindered by a neck join is something most other traditionally assembled guitars simply cannot emulate. Andy Mooney summed up our own experience quite succinctly in that the new Soloist is for guitarists “who embody old school heavy metal sensibility but with a new school attitude”. Welcome back old friend. 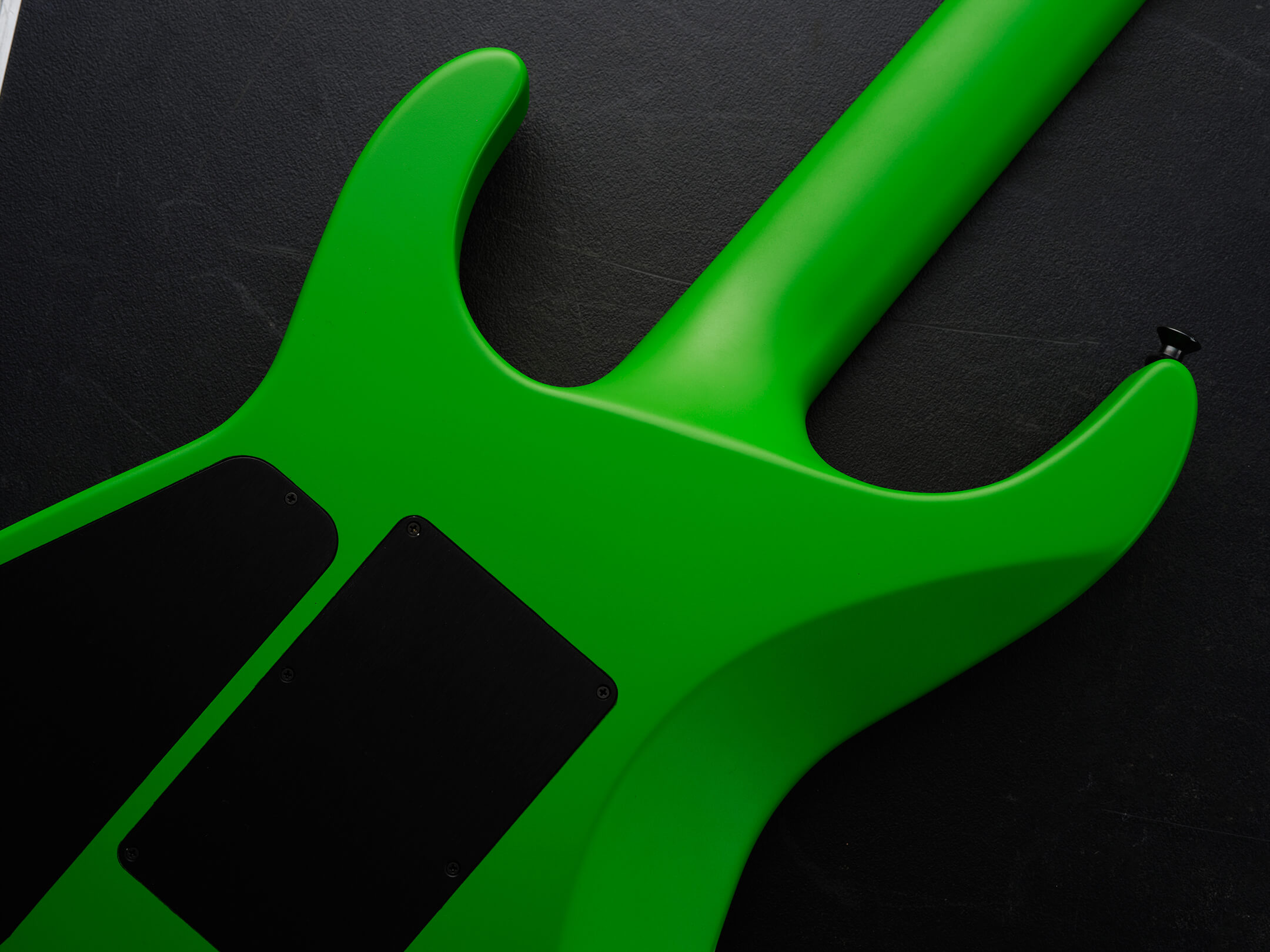