A new signature model for the Iron Maiden guitarist, with a high-end spec at an affordable price. Simon Bradley checks it out…

Since their kinetic 1980 debut, Iron Maiden have been at the forefront of UK metal throughout a career spanning 15 albums. The fierce loyalty demonstrated by their fans has rarely wavered, and today they’re arguably bigger than ever.

The band’s three-guitar line-up still sees Dave Murray riffing away stage right, as he has done since 1978. His unmistakable solos, coloured with the somewhat unconventional use of the neck pickup, are as much a part of the Maiden sound as the galloping bass of Steve Harris and Bruce Dickinson’s air raid siren vocals.

During the band’s heady rise to the top, Murray was inseparable from a black, maple ‘board Strat that he’d bought in 1976 – one once owned by Free guitarist Paul Kossoff, whose iconic 1959 Les Paul Standard we look at in depth here

Retrofitted with a pair of DiMarzio Super Distortion humbuckers, that Strat featured on the first eight Maiden albums and associated tours. In 2009, it was recreated by Fender, appearing in the catalogue as the US-made Artist Series Dave Murray Signature Strat.

Needless to say, it proved popular, albeit with a pretty specific slice of the guitar-buying public, and it went some way to slaking the thirst left somewhat unquenched by Fender’s 2001 be-mirrored Iron Maiden Strat and tantalising glimpses of the Japan-only HST-57DM Murray Tribute model.

This new DM Signature is based on the Stratocaster Murray now calls his number one, following the retirement of his black original, and has been released under the California Series banner. This, of course, equates to Mexican construction, and the associated modest price tag will surely increase this instrument’s appeal straight out of the box.

Up until quite recently, Murray’s own guitar featured a trio of Seymour Duncan Hot Rails single coil-sized humbuckers. However, he has since swapped the central pickup for a JB Jr, a change in preference that’s reflected on this new guitar. 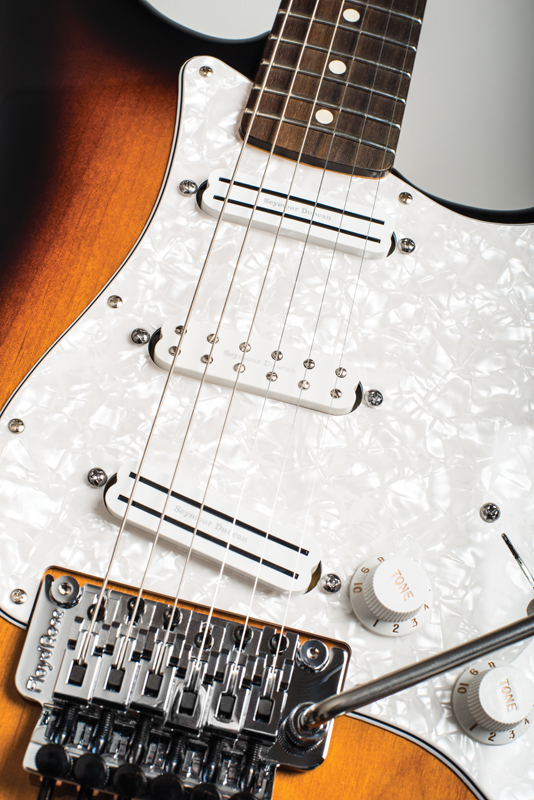 Dave talks specifically about the reasoning behind this change on p57 of this issue and, as we’ll discover, it does add more variety to the guitar’s tonal palette. The instrument also features a five-way blade selector, rather than the three-way fitted on the 2009 version, and the trio of 250k pots operates in the customary manner.

Currently, the guitar is available only in Two-Colour Sunburst, and the grain of the alder body shows through the gloss polyester finish very nicely. The classy vibe is enhanced by a pearloid scratchplate, and we admire the decision to site Murray’s signature on the rear of the headstock: the grinning Eddie face on the front of the 2001 model’s headstock was something of an anathema.

The 2009 model’s maple neck offered a softened V-profile, as would be expected from a late-50s guitar. Here, though, the neck is totally different in feel and ± to us at least ± is the better for it, considering the hard rockin’ uses to which the guitar is likely to be put.

It has a modern, flat yet shallow C-shape that, although not quite into super-skinny Ibanez territory, should appeal to most rock players. It’s eminently playable and the urethane top coat has been applied expertly to give a mirror-smooth finish. 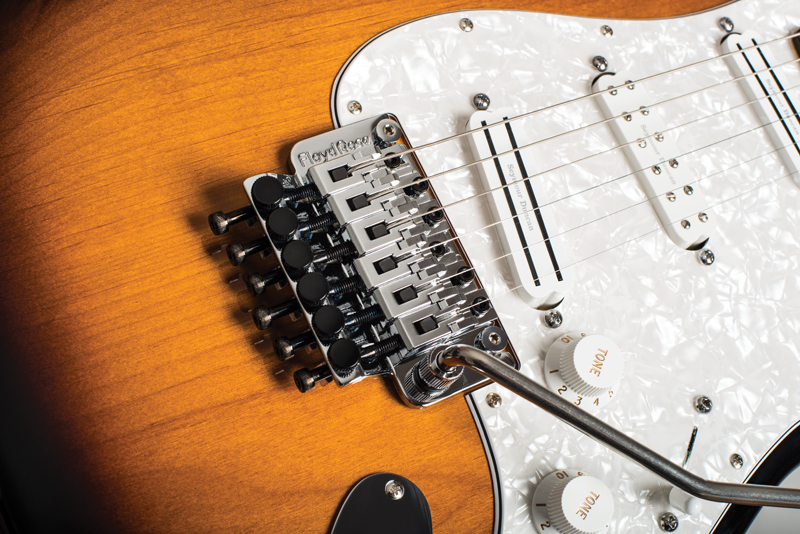 The rosewood board bristles with 21 medium jumbo frets and offers a 241mm-355.6mm compound radius, which in turn allows for an extremely low action: a micro-tilt, also part of the original California Series’ specs, is included here. Additional hardware includes a Floyd Rose Original locking vibrato bridge, which is set resting on the body, providing only downward movement, plus the associated R3 locking nut and vintage-style tuners.

It’s a well-made guitar, plays well out of the box and looks great: what’s more, it’s not an obvious signature model at first glance – something that may well have its own allure.

With a DC resistance of 16.9k, the bridge Hot Rails is certainly a high-output pickup, and we were initially a little concerned that the tone might be overly toppy and thin, especially with a Floyd Rose bridge. Not a bit of it. The old trick of setting the Floyd flat to the body works for Eddie Van Halen, and it certainly does the honours in this case. 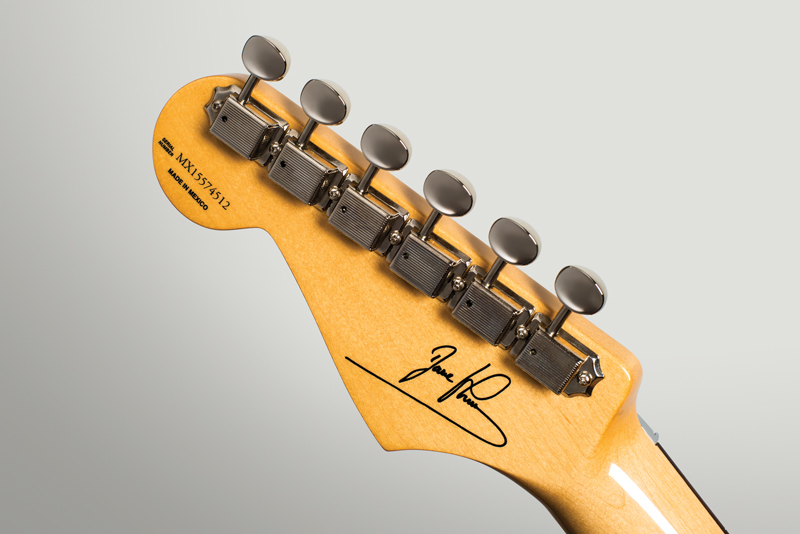 Yes, a good hard-rock tone is full of high-end harmonics and cutting gain, but there’s plenty of depth, too. Maiden riffs are complex and often feature interesting progressions and inversions, so there’s no place for indistinct guitar mush. Happily, the DM provides an impressive level of string separation – even at the highest gain levels.

Classic Murray-style solos with the neck pickup are totally convincing, with just the right ratio of throaty warmth to cut, and lowering the volume cleans the tone up without losing any depth.

With its slightly lower output, the central JB Jnr is arguably the best of the three solo’d pickups for clean options, but we found we preferred position two in this regard, as it combines the bridge and middle pickups; there’s a hint of Stratty twang mixed with a middly character that works very nicely indeed.

The guitar isn’t suited only to metal, of course, but such is the kick from the two Hot Rails that you may find it a challenge to achieve a tone just at the point of break-up that’s suitably subtle for, say, Texas blues: there’s always that ceramic edge close by. 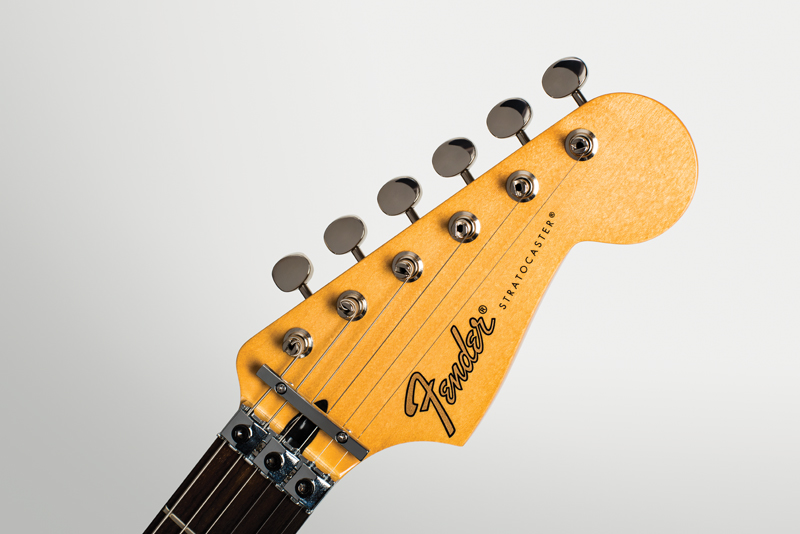 As we’ve already discussed, the neck is an absolute revelation and a joy to play. We didn’t experience any tuning issues with the Floyd and, once your strings have been stretched in, we can’t imagine that you will either.

We genuinely like this guitar. It’s refreshingly removed from the central pillars of the established Fender mantra but not to the extent that it strays too far away from the herd. The Dave Murray Signature is an instrument upon which hard-rock and metal styles will be performed easily and, at £749 (including a padded gigbag), it represents truly excellent value for money.

The trio of hot pickups it comes armed with won’t be for everyone, and those hoping for the usual gamut of traditional Strat tones should probably look elsewhere, but the guitar is more versatile than you may have initially assumed.

It’s nigh-on perfect for metal and hard and classic rock but it possesses an appealingly neutral aesthetic; if you don’t fancy the stigma that comes with wielding, for example, a Dean Dimebag or Jackson King V, the Dave Murray Strat could be just what you’ve been looking for. 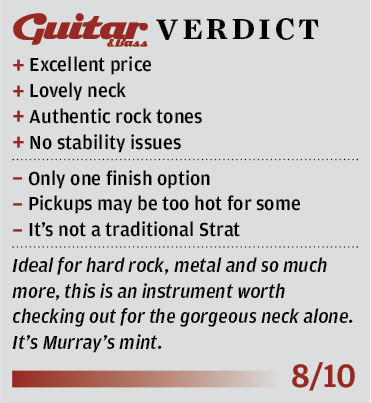 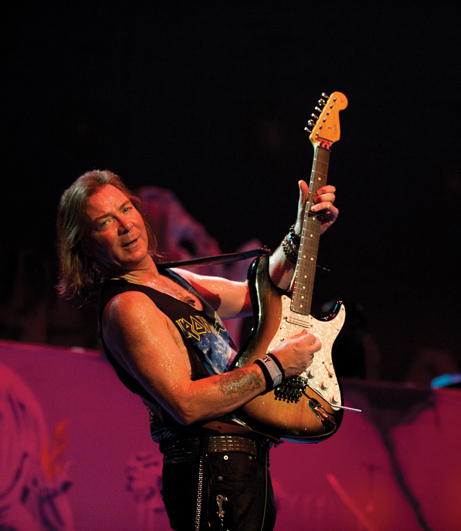 Whether they like it or not, just about every player of any stature has one guitar with which they’re most strongly associated. For Dave Murray, it’s the Fender Strat, specifically the black model with a maple neck he bought in 1976 – a guitar that had a bit of history.

“It used to belong to Paul Kossoff of Free,” Murray told Blabbermouth.net in 2008. “I saw it advertised in Melody Maker, and I went down and checked it out. I got the serial numbers to make sure that it was his guitar. I paid about $1,400 for it, which in 1976 was quite a bit of money, but I didn’t care. I just sold everything I had so I could get it.”

During Maiden’s early-80s golden period, Murray was occasionally seen on stage with a Dean Z or Ibanez Destroyer, but always gravitated back to his Strat: even the ESPs and Jacksons he flirted with during the late 80s/early 90s wore their Fender influence heartily on their sleeves.

For the past decade or so, his number one axe has been the two-tone Sunburst Strat upon which the new signature model has been based. Rare dalliances with a Gibson Les Paul or Epiphone Les Paul Ultra aside, it’s still the guitar he reaches for. We spoke to Dave about the origins of the new guitar, and how it was put together.

When did you begin working on a signature model? What R&D was done?

“Fender approached us in 2011 about issuing a signature model based on my main tobacco Stratocaster, and we agreed straight away that it would be a fantastic idea. The guys came out to measure up the original guitar while we were touring the USA, and my tech Colin Price worked with the design team over at Fender to make sure that it was as close to my guitar as possible. We also wanted it to be affordable, so we opted to manufacture in Mexico. The Seymour Duncan pickups, electrics and Floyd Rose hardware are identical to my Strat, so it’s been very rewarding to keep the cost affordable for most players, but not to compromise on quality.”

How close is it in feel to your main stage Strat?

“With the fact that my main Strat has been played at every show over the last 15-20 years, it’s become almost effortless, but when Fender sent over the first prototype in 2012, it felt perfect. My tech had placed it in the guitar rack next to my other stage guitars, and I picked up the prototype instead of the original during the show, as they looked and felt so similar. I ended up using it on a couple of songs that night!”

Why is the Floyd Rose set with no upward travel?

“The original guitar is a California Series Stratocaster, which we had modified with the Floyd Rose. I like the stability of the locking system, but having the bridge set against the body gives more resonance. I suppose it’s a similar feel to the vintage Strat bridge, having more contact with the body.”

When did you retire your original black Strat, and why?

“I think we retired the old black Strat back in 1988, as I started playing ESP during the Seventh Son… tour, before coming back to Fender, and yes I still have it.”

Tell us something about the Fenders you use on stage

“We have three Stratocasters in total, that have all the same design as the main tobacco Strat, one in cream and another in black, except those two guitars both have maple necks. The original specs for the Strats had three Seymour Duncan Hot Rail pickups, and we kept that setup for years. The only change, which we’ve made recently, was to add a Seymour Duncan JB Jnr in the middle position, as it has lower output compared to the Hot Rails, which handles the clean sounds much better.”

What do you need from a guitar you use on stage?

“Stability, comfort and to look cool!”