This new addition to H&K’s TubeMeister range promises a step up in class and some interesting new features. 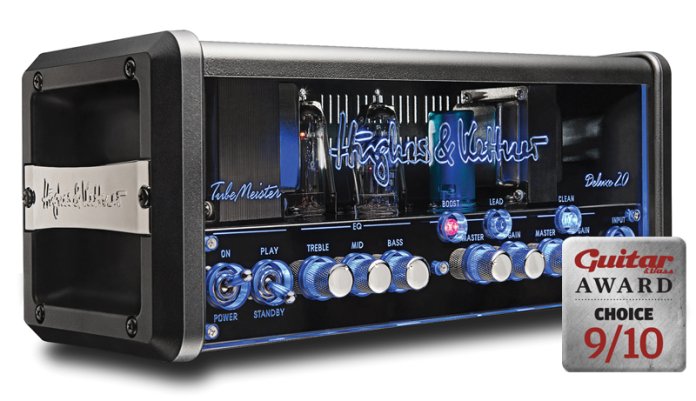 A Telecaster with extra-fat pickups, a Les Paul with extra-thin pickups, a little tweed combo with superior levels of mojo, even a bacon cheeseburger with added salad – when you see the word `Deluxe’, you expect something a bit special.

This little lunchbox head may not initially appear particularly luxurious – in fact,  it looks a lot like the TubeMeister 18 – but Hughes & Kettner has hidden some new goodies on the inside, and a few more round the back.

The output stage uses EL84s, like the other TubeMeisters, but the Deluxe 20’s preamp – shared by its 40-watt big brother – is a new design influenced by that of H&K’s mighty (and mightily expensive) TriAmp Mark 3. And while the XLR output for DI on the rear panel isn’t new, the little red strip alongside it is.

Four toggle switches now bring some of the added functionality of H&K’s standalone Red Box unit, allowing you to mimic the sound of a mic’d-up cab with the choice of large or small, vintage or modern, at mic or line level.

Stuff we’ve seen before includes an effects loop, a tube safety control section that continually adjusts the bias to keep the power valves healthy and a power soak for shrinking the output down from 20 watts to 5, one or complete silence. You’re right, there isn’t much call for silent amplifiers, but that option could be useful for home recording via DI when there’s a housemate watching Pointless Celebrities in the same room.

We’ll come to the front panel in a sec, but let’s just pause halfway round for a look at the Deluxe 20’s distinctive side handles. Are these more practical than a simple plastic handle on the top? At this size and weight, no. They make the amp a little awkward to pick up with one hand, and awkward to lay back down flat afterwards.

In fact, if you have fretboard-spanning gorilla hands, you may find it simpler to just grab across the top of the amp. Another drawback is that you have to unscrew both end panels in order to remove the top cover (to get to the valves) or the baseplate (to get to the circuit boards).

Everything on the front of the amp is familiar enough – including the way the whole thing gleams electric blue like some trippy aquarium. There’s a three-band master EQ section on the left, and master volume and gain controls for each channel on the right.

You can switch between clean and lead channels using the push buttons, which light up blue and orange respectively when selected. There’s also a boost button, which lights up red; this works only on the lead channel. If, like the rest of the human race, you have only two arms and like to use them both to play your guitar, a standard double footswitch can be used for channel switching and engaging the boost.

So, are we in for some deluxe sounds? Early impressions certainly point in that direction. Single coils through the clean channel with the master volume at full and gain around 10 o’clock come out bright, fresh and full through an open-back 2×12.

If you’ve found some Hughes & Kettners a little stiff in the past, prepare to have your opinion ever so slightly revised. The Deluxe 20 is touch-responsive in a way that makes you want to keep on playing, and bumping up the gain past halfway only increases the fun as a wisp of crunch begins to scuff up the edges of airy, chiming chords.

With humbuckers, the grit arrives earlier, as you’d expect, and it’s no less satisfying. There’s plenty of headroom, but also more gain than you might expect from the `clean’ half of a channel-switching amp. Maxing it out brings full-on overdrive that’s perfect for powerchords and self-indulgent workouts, with an element of EL84 fizz but an overall sound that’s more about Fender chunkiness than Vox shimmer. 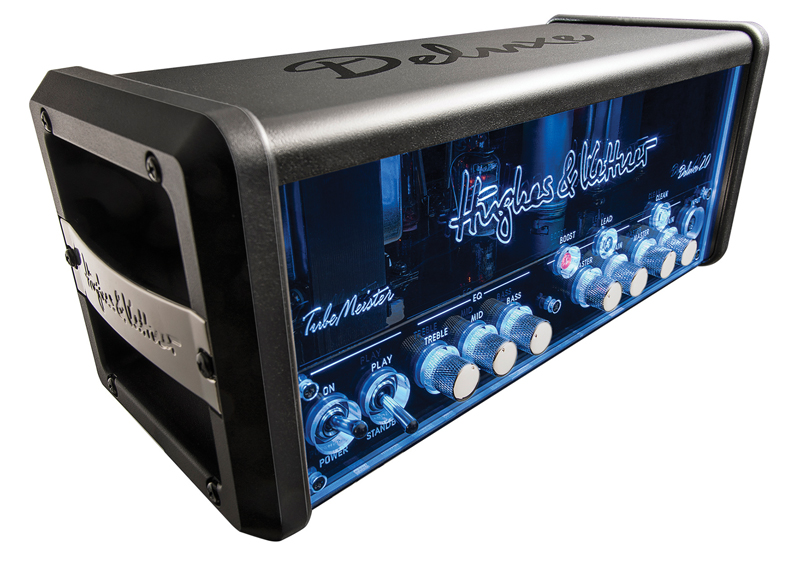 There is an overlap between the two channels – full gain on `clean’ is roughly equivalent to 10 o’clock on the lead channel in terms of distortion, but the second channel is more overtly aggressive and can never match the first for warmth. It’s clear and powerful, if not the tightest rock sound ever – chords can get a little mushy in the bottom end at high gain levels, though you can control this to an extent with the tonestack.

The Deluxe 20 seems happiest in general with a slight V shape here, pulling out just a touch of midrange snarl to let the amp breathe, but the treble control has a bit more to say for itself than the other two. Push it past three o’clock and, as well as adding top end, it begins to filter out the bass in a fairly musical way. And the boost? It doesn’t make the amp appreciably louder, but adds fullness and sustain in a way that should facilitate your show-stealing up-shift from rhythmic chugging to unabashed widdle-mania.

Both master volume controls work well and, as long as you don’t go lower than about halfway, the amp will retain more presence and body this way than by switching down to five-watt mode. That’s not to say the power soak is a failure – it’s absolutely fine – but there’s no denying this head sounds best with everything fully open.

On the other hand, the old lady next door’s just gone up for an early night, bless her, so it’s time to set that power soak to zero and try out the Deluxe 20’s DI capabilities. If this does the business, it’ll surely be a godsend for gigging guitarists as well as home recordists – getting a proper amped sound straight into the PA means not having to have one of those oh-so-kickable mic stands pushed up against your cab ever again.

It does the business. The `off’ setting reveals the true, plasticky horror of untreated guitar DI – useful only if you want to record a raw signal for software amping – and the difference when you turn on the cabinet emulation is striking. The plastic melts away, transient spikes are naturally subdued, and the effect is impressively realistic.

Switching from small cab to large adds a dollop of extra heft to the bass, while the vintage/modern switch takes you from a classically balanced response to something more mean and wiry. 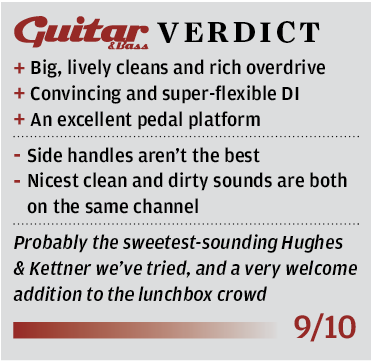