Which would you choose: the mighty handwired Bluesbreaker combo or its 18W 2×10″ cousin? 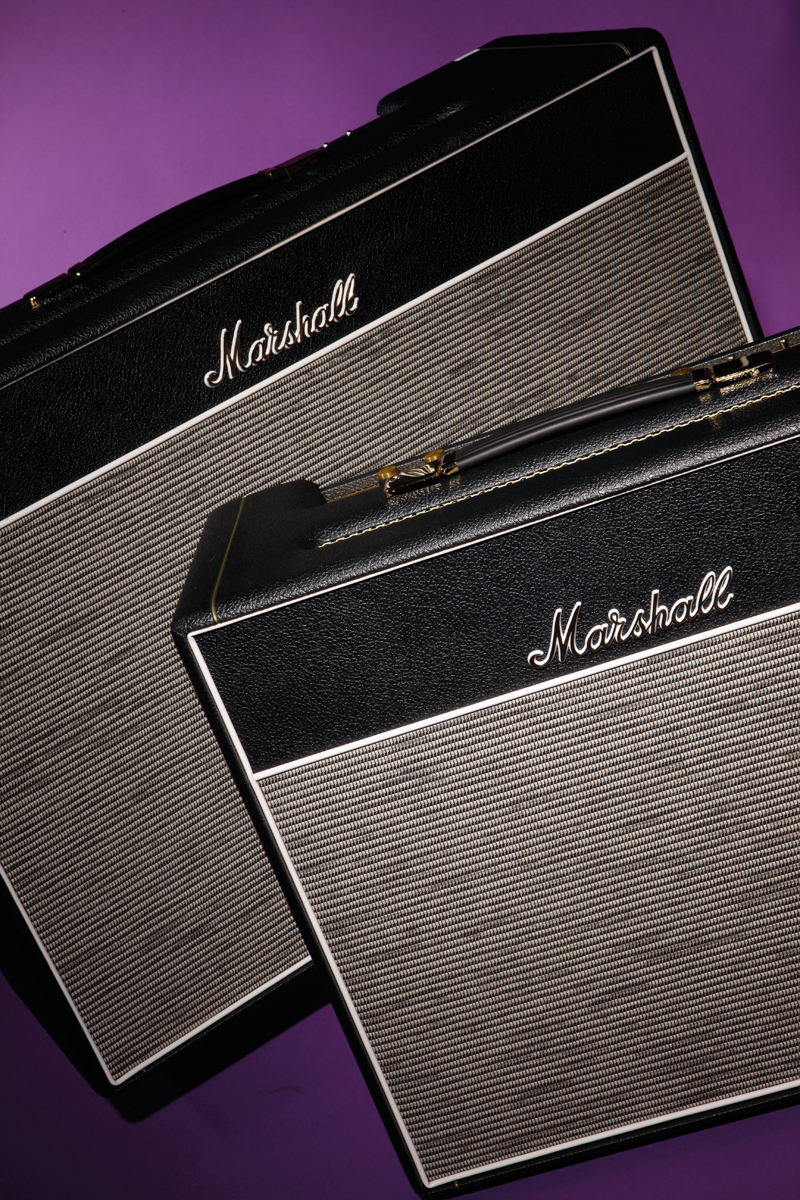 You can throw the word ‘dinosaur’ at all sorts of people: those who refuse to get a mobile phone, those who don’t trust foreign food… or, perhaps, those who wish Marshall was still making amplifiers exactly as it did 50 years ago. But watch what you say, because if you ever get the chance to stand in front of an early plexi-panel Marshall singing its handwired heart out, there’s a severe danger you’ll suddenly come over all Jurassic yourself. 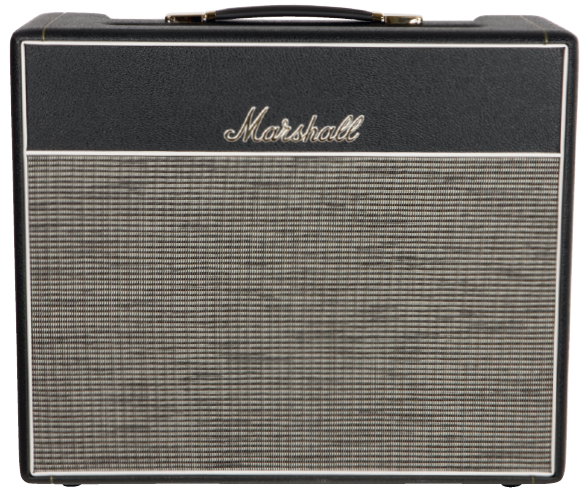 These amps provided the pure, thunderous tones that shaped the sound of British rock, and for all their quirks they represent a kind of perfection. So why wouldn’t the boffins in Bletchley try to recapture that moment with some authentic reissues?

There are now seven models in the Marshall Handwired Series, and these are two of the latest additions: a ‘faithful recreation’ of the 30W Series II 1962 combo, released in 1965 and hoisted into legendary status not long after by Eric Clapton’s use of one on the John Mayall & The Bluesbreakers ‘Beano’ album; and a reissue of the 1958, a 2×10″ 18-watter that first appeared in 1966.

Yes, those date-like names are confusing, but we can’t go back and change history now, can we? The nicknames are simpler, though: Bluesbreaker and mini-Bluesbreaker. Both amps are valve-rectified, and each has a footswitchable tremolo effect – valve-driven, of course – on one channel. The included footswitches are delightfully dinky wedges of grey-painted metal.

Well, it’s pretty big anyway. This has to be one of the widest guitar combos ever made, at just over 32″ – that’s way wider than a Vox AC30 or a Fender Twin Reverb, and a good three inches more than the standard 1962 reissue. The reason is that this handwired version uses the KT66 output valves found in Clapton’s mid-’60s original, rather than 5881s, and these monstrously fat tubes take up a lot of chassis space.

The result is an amp that isn’t so nippy around corners, but it isn’t actually all that heavy, mainly because the timber is only 12mm thick. So there’s plenty of space around the speakers, which are a modern rarity: English-made Celestion Greenbacks. They’re labelled G12C, and like everything else about this amp – including the Drake transformers – they’ve been designed to get as close to the original specifications and sound as possible.

Six screws hold the amp snugly to the cabinet’s side battens, but once you’ve managed to lift it clear you still have to undo as many bolts to remove the back panel. It’s worth the effort for the view inside the chassis: the centrepiece is a large and imposingly thick brown turret board, which has been wired up with supreme neatness. Modern components have been used, naturally, but this is an amp that looks every bit as promising on the inside as it must do viewed across a dingy stage, balanced on a milk crate… or rather, two milk crates.

While it’s warming up, let’s have a quick look at the top panel. The two channels have independent Volume controls, but the three-way tonestack and Presence are shared; finally, we find Speed and Intensity knobs for the tremolo. There are two inputs per channel, and they’re wired in phase, so we should be able to patch one into the other for high-gain high-jinks.

Sounds
Humbuckers at the ready, we’ll set off on Channel 1 with all the tone controls at halfway and Volume around 2. Unsurprisingly, it sounds pretty hefty. There’s a decent amount of clean headroom available – yes, some Marshall fans do like to play without overdrive, if only at funerals – and what you’re likely to notice above all is the huge warmth of the bottom end. It can be slightly loose, but in a pleasing way, and it’s matched by a shimmering top end that rings out boldly without harshness. So what’s going on in the midrange?

Not that much, actually – we often think of the classic British voice as being all snarly mids, but in truth there’s little of that to be heard on the Beano album… and the 1962HW lines up extremely well against that template.

With Volume around 5 we’re getting crunchy, as well as seriously loud, and the vintage warmth begins to ooze like lava. It’s as touch-sensitive as it is tonally transparent, which serves as an irresistible invitation to go noodling up the neck with jazzy fluidity. On the second half of the Volume dial it’s grinding rock and hairy blues all the way, with no misbehaviour in either bass or treble: this isn’t an ultra-high-gain beast but it has a fantastic tone for thick, pure power chords, and the signal-to-noise ratio is impressive.

Channel 2 is a lot darker, and you can only do so much with the EQ controls, but there are a couple of other ways to brighten it up: by cranking the Presence, which is very sweetly voiced in a Vox Top Boost kind of way; or, less intuitively, by turning up the Volume on the other channel. We can happily report that the tremolo sounds every bit as rich and throbby as it should, with a conservative but well-judged speed range. Less happily, in the case of our review unit it’s accompanied by some low-level rhythmic ‘motorboating’ noises. You probably wouldn’t hear it under chords, but it’s not the sort of glitch you expect at this price. 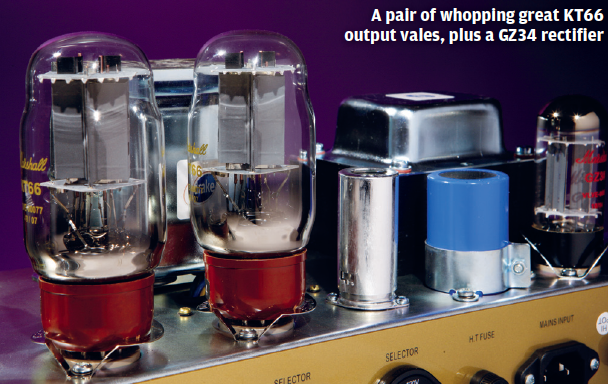 Patching one channel into the other is a handy way of adding thickness and gain, as well as certain amount of tonal versatility, but there’s more fun to be had by using an A/B switch to hop from one to the other: as long as you can match the tones up reasonably well, this makes the 1962HW a nifty channel-switcher for live use. 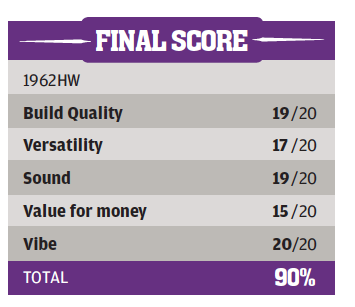 1958X
Marshall’s 1974 combo, a lightweight 18-watter with a single Greenback, is something of a legend in its own right, and thanks to its simpler circuit it has probably been the starting point for more ‘tributes’ (and overt clones) than the Bluesbreaker itself. The 1974X reissue has been around for some years now, and despite some transformer issues on early samples it’s a gem.

The 1958X version swaps the 12″ speaker for a pair of ‘aged’ 15W Celestion G10Fs, which should give it just a touch more room-filling reach. This has been done without having to make the cabinet any wider, and next to the 1962HW it really does look like a baby elephant nuzzling its mum. This model doesn’t have a negative feedback loop, so there’s no Presence control and we can expect a more open, perhaps slightly more Vox-like sound.

Sounds
This time it’s the tremolo channel that’s brighter. There is some clean stuff available at low levels, but not a lot: the mini-Bluesbreaker is an amp that pleads to be pushed into overdrive. If anything it’s even more organic and responsive than the bigger amp, with a ‘sweet spot’ that extends most of the way round the Volume dial: delicately plucked chords can be virtually dirt-free, but dig into single notes with some intent and they come out thick and buttery.

At full volume the 1958X is doing its very best to match the mighty tone of the 30-watter – there’s less thump to the chest, and the cathode-biased EL84 output valves make it more fresh and fizzy, but this is nobody’s runt.

There are no motorboating issues with the tremolo this time, and the effect is just as tasty as it is on the other amp. It’s a deep pulse even with Intensity down to about 3, and when you set both controls to full it gets pretty extreme. If you’re lucky enough to have an audience, and would like to keep them, you might want to go easy here.

We should just mention a couple more differences between the two amps: the 1958X’s two channels are not wired in phase, so patching one into the other sounds flat rather than fat; and those cute footswitches are not interchangeable, as the 1962HW’s has a balanced cable. We found this out by getting them mixed up and losing about 10 minutes wondering why the tremolo wasn’t working. Whoops.

Verdict
Maybe people go on too much about the woody clonk of the ‘British sound’ – you can’t get more British than these Buckinghamshire-built beauties, and yet they’re both as sweetly transparent in the midrange as anything to come out of California. What they offer above all is two slightly different kinds of big, smooth, crunchy overdrive. Marshall will never be able to please all the cork-sniffers, or undercut the indie makers standing on its shoulders; but these are the real thing and, one tremolo niggle aside, they’re nothing short of gorgeous 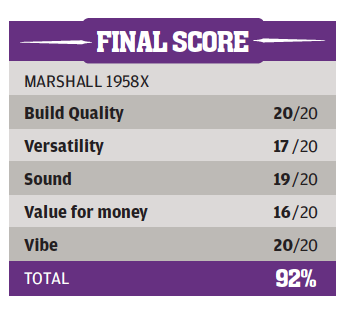