A compact reverb pedal with the audio quality and versatility to take on the £400-plus pedalboard-hoggers? 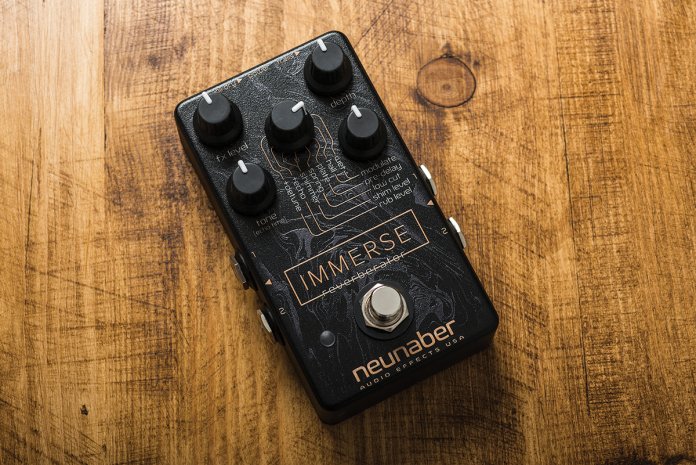 Guitar music goes through wet and dry phases, and right now things are feeling mostly quite soggy. But while the surf twangers were happy with their amplifiers’ spring reverbs, and the shoegazers built many a wall of noise with analogue delay, today’s ambient soundscapists demand more – more precision, more purity, more options. Lucky for them, then, that digital reverb has been getting so frighteningly good in recent years.

Back in February we reviewed three of the best high-end reverbs – the Strymon Big Sky, Eventide Space and Empress Reverb – and if you’d shown us unicorns playing keepy-uppy we could hardly have been more impressed. But they all cost close to £500, and will fill up your pedalboard space as greedily as they empty your wallet. Is there a place for a top-class multi-mode reverb that’s compact and affordable?

If there is, Neunaber might just be the name to fill it. This new-ish American maker is best known for its Expanse series – deceptive three-knob pedals that can be loaded up with all sorts of digital sounds via USB. But there’s none of that with the Immerse: this is a straightforward stomper that requires nothing more than a guitar at one end and an amp at the other. Well, that is unless you want to use it in an effects loop… or with two amps in stereo mode.

The obvious advantage of this is that you have many different sounds living inside the unit at once and flit between them with the twist of a rotary switch, rather than having to ask your PC for help; the two disadvantages are that you lose the near-infinite tweakability of software, and that the control layout becomes mighty crowded. There’s no appreciable difference in price between this and an Expanse box. 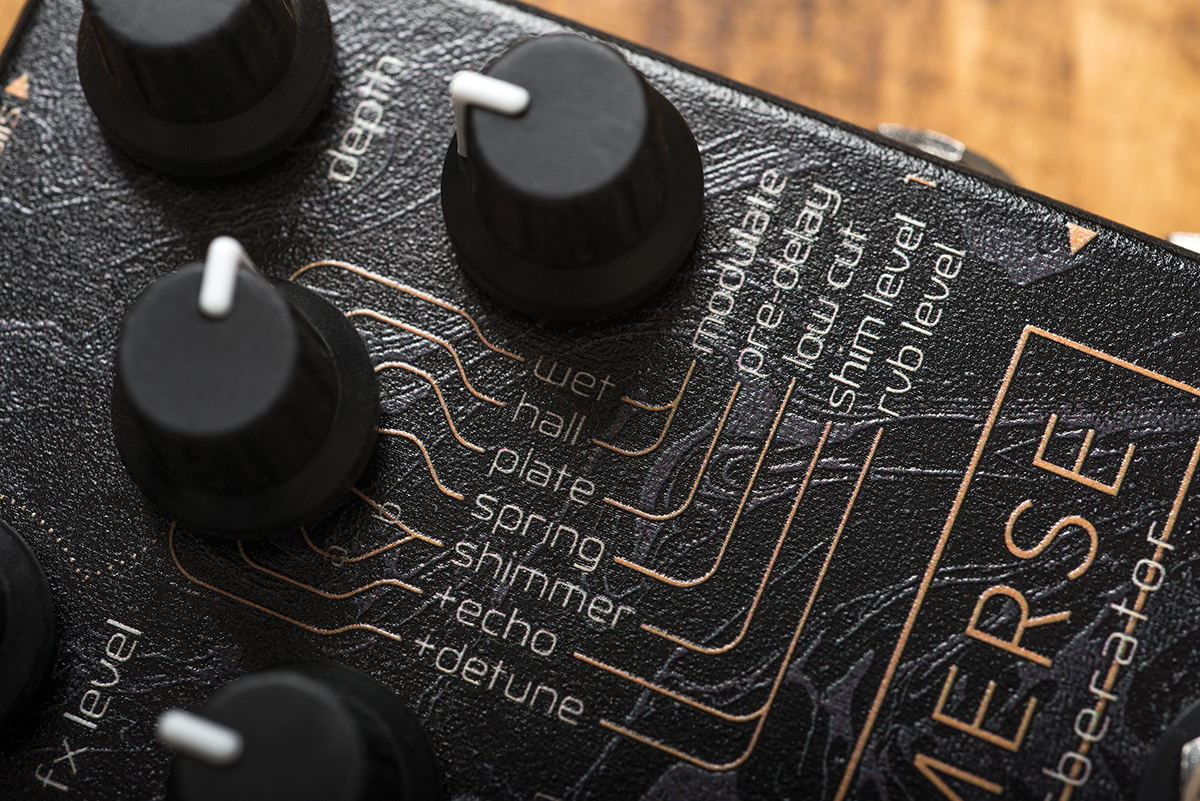 Once you’ve managed to decode that array of lines and words wiggling down from the central mode control, you’ll find there are eight sounds on offer: four standard reverbs, two with ‘shimmer’, one with added echo (delay) and one intriguingly labelled ‘detune’. The bottom-right knob controls a different parameter depending on the mode, while the tone control doubles up as delay time when you’re in ‘reverb+echo’ mode.

Your dry signal stays analogue while digital processing is going on around it, but there’s no true bypass – just two flavours of buffered. Reverb trails can be switched off via a switch at the back so the effect will cut out abruptly as soon as you hit the footswitch, rather than dying out naturally, but what you get in return is a little less background noise when the Immerse is bypassed.

There’s also a ‘kill dry’ switch that lets you output pure reverb without the original signal for use in a parallel effects loop. This might also come in useful for ultra-ambient washes of otherworldly weirdness, swirling off into the ether like the cries of a thousand lovelorn angels, however…

Right, let’s go through all eight sounds. ‘Wet’ is an updated version of the algorithm that powers the Neunaber Wet pedal. It’s a richly atmospheric ’verb that can be coloured with some tasteful modulation using that bottom-right function knob… and it sounds huge, especially in stereo. The level, depth and tone controls let you decide exactly how you want the reverb to blend in with your dry signal; and while things can get properly epic, the guitar itself is never swamped. 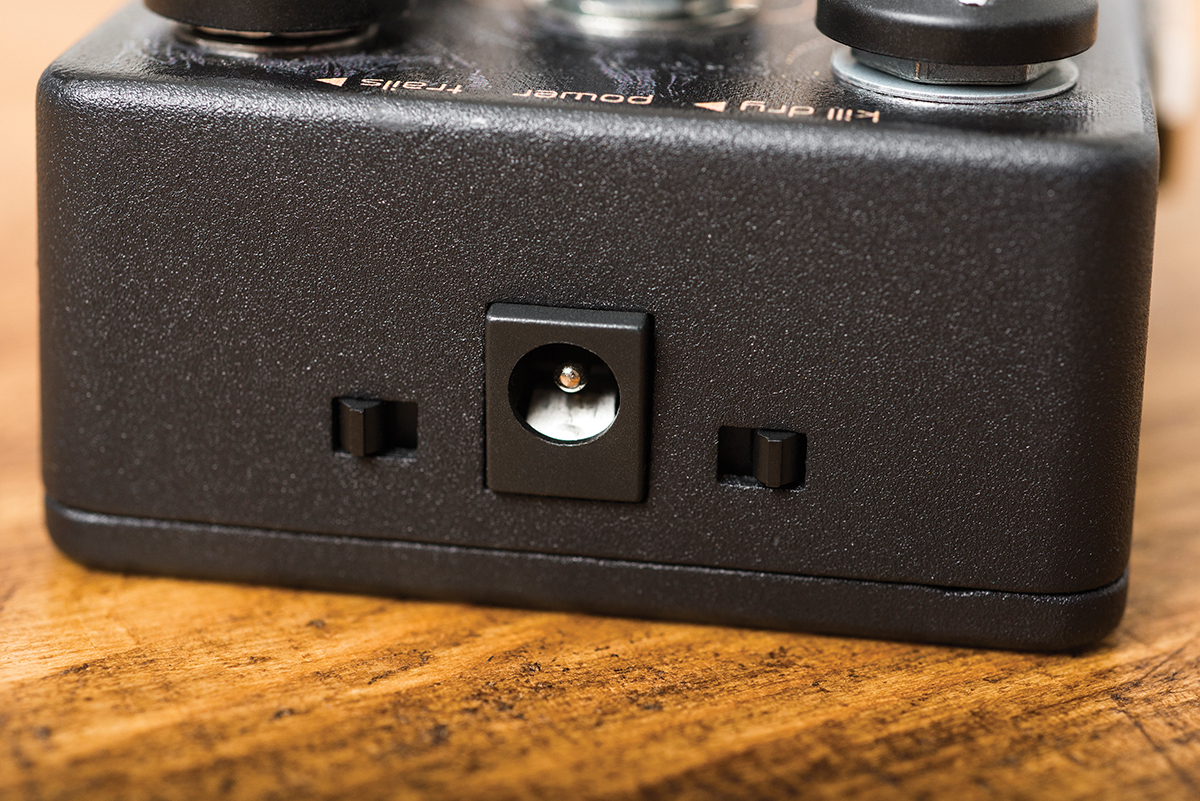 Hall sounds similar but with a nicely judged pre-delay to keep the dry sound further out in front, and is equally luscious with a dash (or more than a dash) of modulation. Plate differs subtly again, adding some metallic density, and this time you can adjust the length of pre-delay. Inevitably, that’s at the expense of modulation – a minor compromise, but perhaps the first sign of the compact format’s limitations.

The spring setting isn’t wildly different in character from the first three – Neunaber’s been careful not to overdo the juddery stuff – but this time it’s the bottom end of the reverb that’s up for tweakage, meaning you can thin out anything that starts to get boomy at the same time as controlling the highs with the tone control. Now that’s tidy.

The pitch-shifting ‘shimmer’ effect is cropping up on many modern reverbs, and there are a couple of tasty variants here. The two create different harmonic textures, but both allow trilling high notes to push their way through the ambient cloud in ghostly and not always predictable ways. This isn’t just reverb with a shrieking upper octave tacked on: they’re both highly musical synth-like sounds. 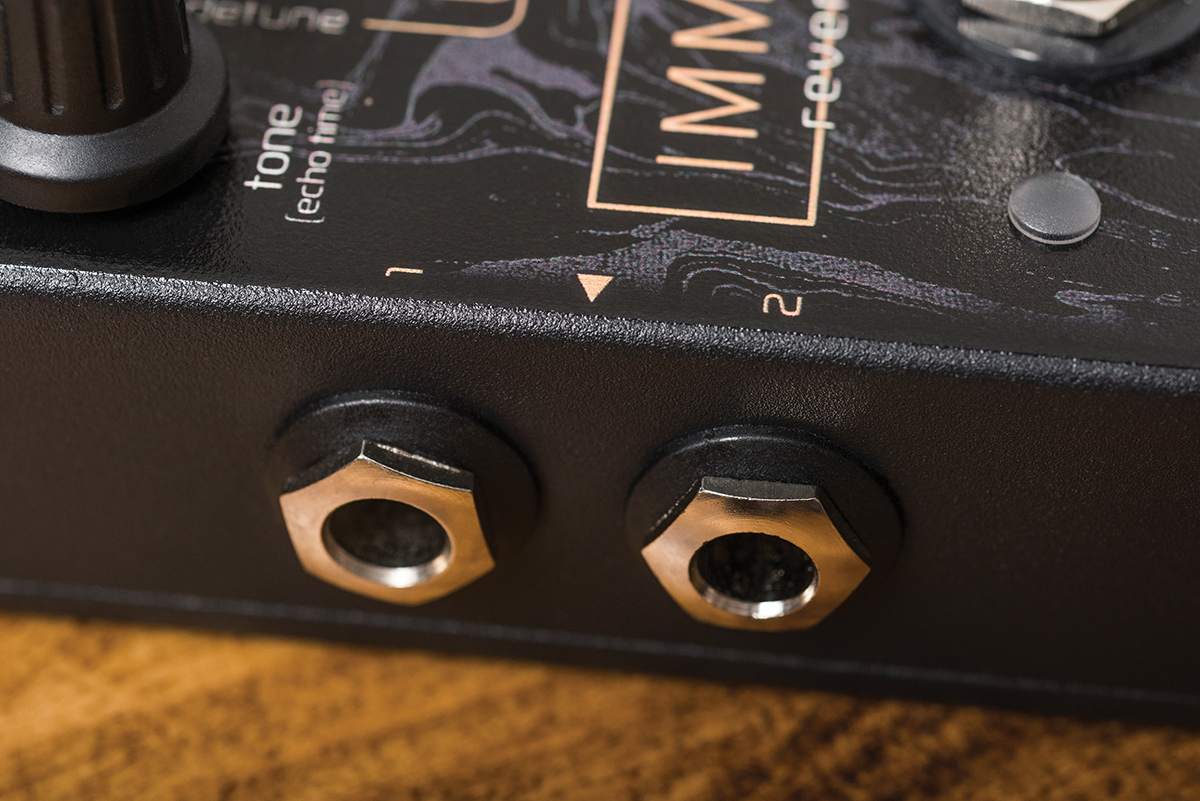 In the final two modes, ‘+echo’ and ‘+detune’, it’s the level of the reverb itself that you can adjust with that fifth knob – so turn it all the way off and you can use the effects on their own. The first is a super-sweet delay, and the second is a heavy chorus that’s more obviously wobbly. Both of these modes sound excellent with just the right amount of ambience blended back in, and really open up the Immerse’s capabilities as more than a mere background-filler. It’s a pity you can’t have delay with modulation, though.

And those ultra-ambient washes we were wondering about? They’re in there – but make that a million lovelorn angels. If you’ve ever listened to a cathedral organ and thought the best bit was the slow dying of those massive, dissonant overtones after the organist stopped playing, you’ll enjoy kneeling in front of your amp for a few sacred moments of this. 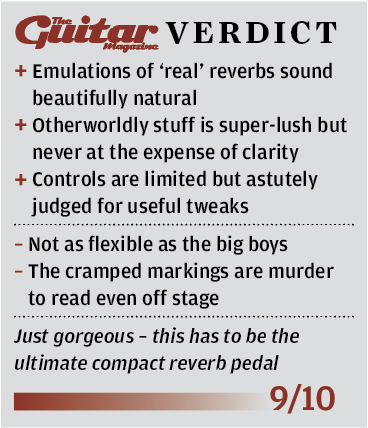