The Bax Bangeetar may look like an overdrive pedal with extra knobs, but there’s more to it than that. 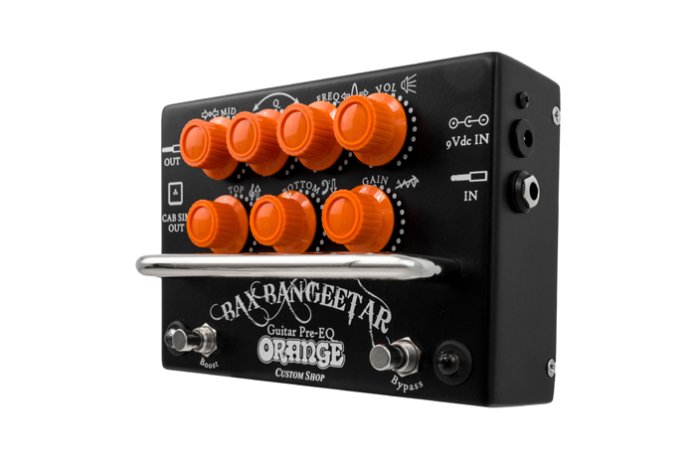 The Bax Bangeetar is basically an Orange preamp in op-amp form, coupled with a studio-style equaliser in a sizeable stompbox enclosure. The equaliser section is the Bax Bangeetar’s standout feature, and it inspires the name. Invented by Peter Baxandall, the Baxandall tone stack is an active equaliser with controls that operate independently.

Regular guitar amp tone stacks have interactive controls, and when set halfway up, you get a bass roll-off with midrange scoop. A Baxandall stack has a flat response at equivalent settings, and in active form there is no insertion loss. There’s also the potential for bigger boosts and cuts in the mids.

Although Baxandall-style equalisers have featured in various guitar amps, the circuit is more commonly seen in hi-fi and pro audio gear. In some ways, this is odd because the midrange is where it all happens for electric guitar.

We all bang on about treble and bass, but a regular six-string tuned to concert pitch doesn’t generate frequencies that qualify as `bass’ in the strictest sense. What’s more, amp speakers cannot reach tweeter heights. Chug frequencies are actually pumped low mids, and cut is really upper-mids.

Consider how tweed and blackface-style Fenders differ, or how a Mesa/Boogie can be distinguished from a Marshall. Whether consciously or not, we assess guitar gear mostly by listening to the way it shapes the mids.

Metal guitarists understand this better than most, but even so, the tone controls of most amps remain fairly rudimentary. By and large, you get three controls operating on three pre-set frequencies. Don’t assume the absence of a mid control means the midrange frequencies are not being altered. 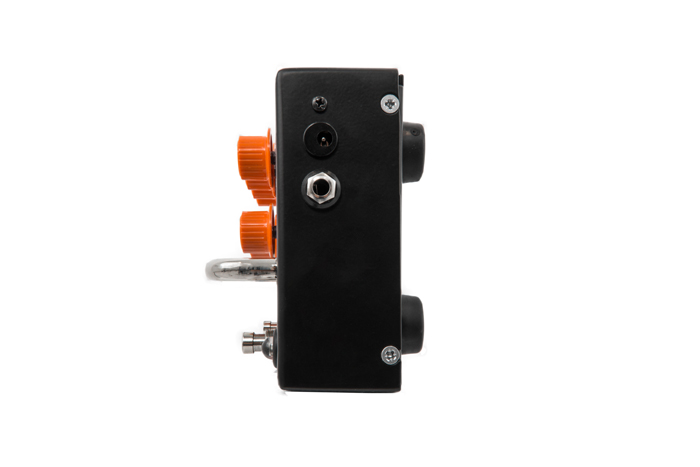 Having established how Baxandall tone stacks can be useful for guitarists, it’s worth explaining why Orange’s design guru, Adrian Emsley, has installed a parametric equaliser rather than a midrange boost/cut.

Studio engineers use parametics to fine-tune guitar sounds in a way not possible with regular amps. Studio parametrics provide boost and cut, but the best bit is the frequency is selectable rather than fixed. Higher-quality parametrics, such as the Bangeetar’s, have `Q’ or `bell width’ controls to set the range of frequencies around the selected point the equaliser acts on.

Parametric EQs are very powerful tone-sculpting tools that can be used for minor corrections or subtle enhancements. They can also perform precise boosts or cuts at carefully targeted frequency points. This can help you hear yourself in a dense mix, and create space for other instruments.

The Bangeetar’s controls also include treble, bass, gain and volume. Two footswitches provide a 5dB boost and bypass. The Bangeetar is not a true bypass pedal, because Emsley has employed a high-quality buffer amplifier with a low-output impedance to drive long guitar cables and other effects. The cab sim out is voiced to emulate the sound of a mic’d up Orange 40th Anniversary PPC412 cabinet loaded with Celestion G12H 30s.

To compare the flat-response Baxandall stack with a standard tone stack, I plugged into a blackface amp and matched on/off volume levels, setting the Bangeetar’s volume high and gain low. The difference wasn’t profound, but the Bangeetar fattens things up with the boost/cut controls centred.

This type of test doesn’t reflect the way in which the Bangeetar is likely to be used, so I moved on to the overdrive. This is where you’ll find the solid and harmonically loaded tones associated with Orange valve amps, but there was a fizzy and uneven quality to the tail end of the decay. 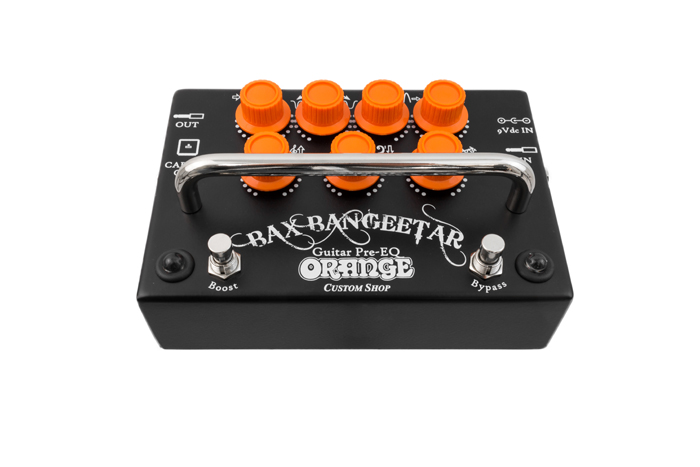 This is something I have noticed with even very high-quality op-amp overdrives and, for the Bangeetar, the simple fix is to bump up the supp

ly to 12V. All my subsequent tests were performed at this higher voltage, where the Bangeetar felt more dynamically responsive and notes decayed smoothly.

The gain range is huge, moving from bluesy breakup to shred metal. Judged solely on its merits as an overdrive/distortion, the Bangeetar is top drawer, but its full scope becomes apparent only when you get onto the equaliser.

A quick way to familiarise yourself with a parametric is to select a narrow `Q’, apply a healthy boost and sweep through the frequencies. With high gain levels, you may notice an effect like plucking harmonics as you move your finger along a string, and the frequency control moves through the overtones.

Some frequencies will enhance the tone and may even help your guitar to drift into feedback with ease. Others may sound boxy or boomy. You can attenuate those frequencies to refine the tone. You may notice that attenuating at one frequency produces classic British rock tone, while another frequency will give more of a US vibe.

You can also boost mid frequencies to mimic Mick Ronson’s cocked wah sound. When you add the bass and treble shelving to the mix, the Bangeetar’s tone-shaping power
is formidable.

The cab sim out remains active regardless of the on/off status of the pedal. I tried recording direct through the Bangeetar and re-recording a DI’d guitar signal through the pedal. Both produced perfectly acceptable results at lower gain settings, but you must be careful with the input level when you’re re-recording/re-amping because the Bangeetar can get a bit gritty when it gets too much signal.

The Bangeetar would be my automatic first choice for recording directly if I also had a decent modeller on hand, but it’s exceptionally good as a distortion/lo-fi processor for vocals, bass and especially drums.

The boost feature doesn’t provide much of a volume lift, but it does subtly beef up the tone, while also making it clearer. I’d be inclined to leave it switched on. 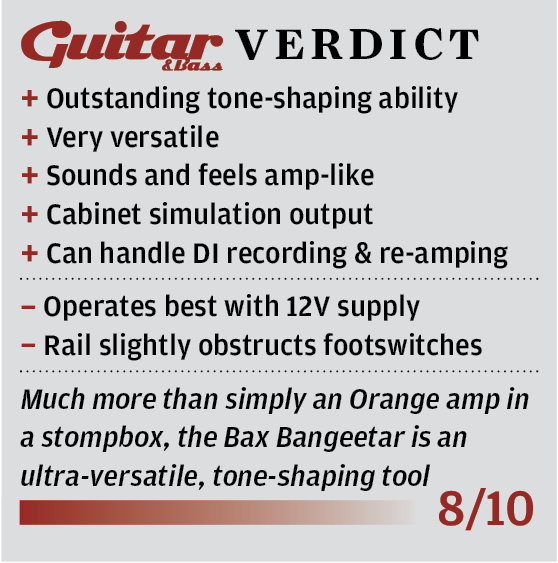 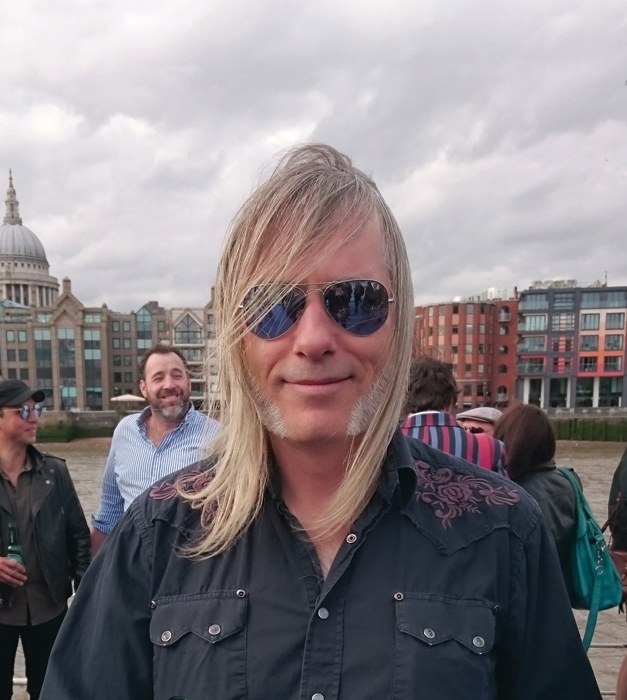 The last pedals that Orange released were a sustainer and a phaser, but that was back in 1972 when Bax Bangeetar designer Adrian Emsley was wearing short trousers. We caught up with Ade for a quick chat.

What’s the Bax Bangeetar all about?

“It’s loosely based on the gain structure of our Rockerverb amp, but it’s got a bit more gain, and the concept is to run that into something that’s closer to a vintage mixing desk channel equaliser. Something like an old Neve with Baxandall top and bottom shelves and an active parametric midrange with a frequency sweep from 150Hz to 7.5KHz. So, if you’re plugged into an amp with a frequency you’re not liking, you can EQ that frequency out.”

How are you achieving the clipping?

“It’s all op-amps running at high impedance, like they would in an amp, and there are no clipping diodes. It’s four stages of gain, just like using two 12AX7s.”

Could you use it in the studio for processing drum loops and vocals?

“Yeah, you can hang them out of mixing desks because the headroom gives it that range. Voltages are bumped up internally, so everything is powered at plus/minus 9 volts or 12 volts, with 18 volts or 24 volts of headroom. 99 per cent of pedals run virtual ground, where you put 9 volts in but every stage is referenced to 4.5 volts, which halves the headroom. The Bax Bangeetar will drive anything in its path, and can even be plugged into an effects return.”

Finally, are there any other Orange pedals in the pipeline?

“Possibly, but if I told you that, I’d have to kill you.”

Can I quote you on that?

“Yeah, all I can say at the moment is, maybe NAMM 2016. The other thing is that these Bax Bangeetar pedals are on a limited run of 2,500, so grab one while you can.”