The British master of fairground-lit pedals with analogue sound and digital control has turned its attention to bucket-brigade delay. And as Richard Purvis finds out, it has hidden talents… 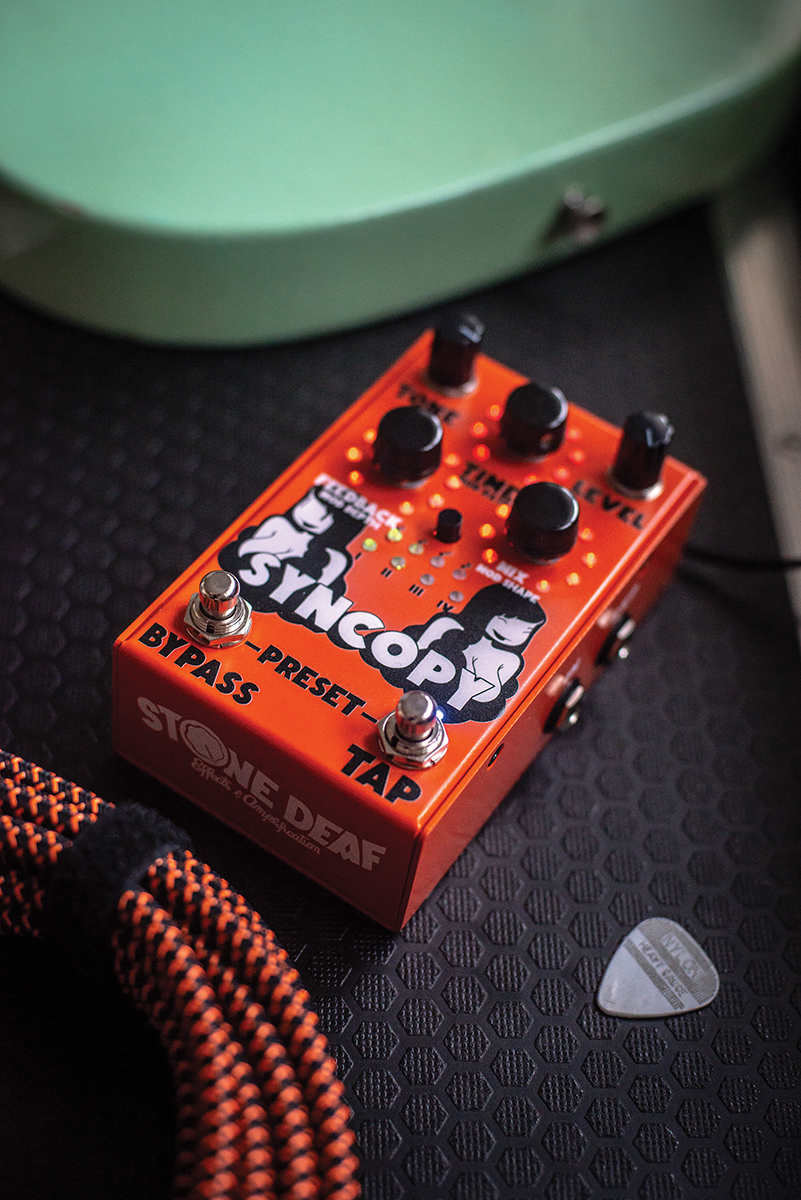 Stone Deaf has seven stompboxes in its current range, with graphic designs ranging from quirky to the downright freakadelic. But it’s the British company’s two latest launches that really shine… literally. Like the Tremotron tremolo before it, the Syncopy delay is a riot of multicoloured LEDs. We count 36 including the tap-tempo indicator, and they all light up when the pedal is in bypass, which could come in handy if you forget to buy fairy lights in the run-up to Christmas.

More importantly, also like the Tremotron, this unit represents a forward-thinking approach to pedal design that combines all-analogue signal processing with digital tweakability. So while the short summary is ‘bucket-brigade delay with switchable analogue modulation and a maximum time of a full second’, it’s in the digital details that the Syncopy becomes truly interesting. You can stomp on the bypass and tap-tempo footswitches simultaneously to toggle through four presets, or connect a MIDI controller to take that tally up to 128. You can change the depth, rate and shape of the modulation. You can assign an expression pedal to control multiple functions, including slipping in and out of self-oscillation, and then store that assignment to chosen presets.

This is one of those stompboxes that really demands you invest half an hour in reading the manual to get the best out of it. But for now, you just need to know that the three main controls are digital and dual-function (via a simple knob-push), which is why the LEDs are essential for navigation. Green lights show you your delay settings, red ones indicate modulation; if both are set to the same place, the LED turns orange. Not everything is so hi-tech: the tone and output level controls at the top are standard analogue dials that operate independently of presets.

There’s a five-pin socket for the aforementioned MIDI control on the left side of the enclosure, and – something that’s likely to be of interest to the more digi-phobic guitarist – an input for a standard TRS expression pedal on the right. This can be programmed to move any (or all) of the three main knobs, in either delay or modulation mode (or both!), simply by pressing and holding while your rocker pedal is plugged in. We like the idea of being able to push down into snowballing repeats then back off again before they get too deafening, but in fact you don’t even need an expression pedal for that: you can also slam the feedback to full just by holding down the tap footswitch. 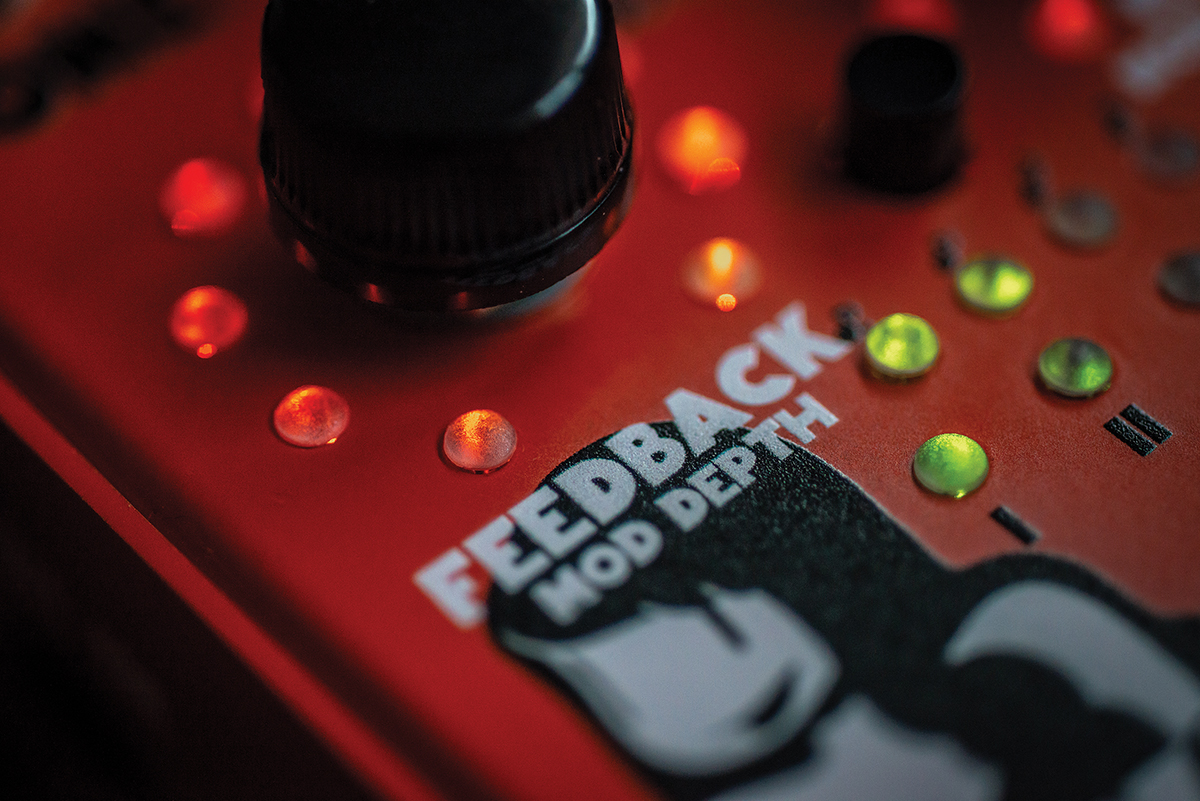 A trimpot accessed via a hole in the bottom of the enclosure lets you adjust the input gain, which could be useful if you’re using a guitar with high-output pickups that might otherwise push the circuit into unwanted distortion. And that’s not all – there are still more clever tricks available if you can bring yourself to read all the way to the ‘advanced settings’ part of the manual. It’s possible to adjust the feedback threshold for going into self-oscillation, and how quickly you get there after holding down the tap footswitch; and you have a choice between true and buffered bypass, the latter being essential if you want to keep the feedback trails after switching to bypass.

Incidentally, while we love the artwork created for Stone Deaf by French illustrator Mcbess, it has to be said that the female forms on this unit might be a bit ‘Benny Hill’ for the modern climate. Maybe it’s just as well that there are all those blazing LEDs here to distract attention.

The four onboard presets give a decent demonstration of the Syncopy’s core skills, but you’ll soon be wanting to get stuck into all those knobs. This quickly leads us to a minor gripe with the colour-coded LED system – it isn’t always clear which function you’re controlling until you see the relevant colour moving around the loop – but the basics are for the most part easy enough to find your way around.

Starting out with no modulation and the tone control at noon, this is about as pure as analogue delay gets. The repeats gets softer with a twist to the left on the tone control, and take on more of a clanging attack to the right, but this thing doesn’t do extreme filtering in either direction. If you really want to get wacky you’re going to have to hammer the modulation settings – and hammer them you most certainly can.

For a start the Syncopy does a fine impression of a Memory Man’s lush chorus effect, but woozy vibrato is also on offer, and pushing the rate can summon a more subtle tape-style flutter. Your dry signal floats over the top unmolested, and unless you push the tone quite aggressively there isn’t much in the way of added hiss. 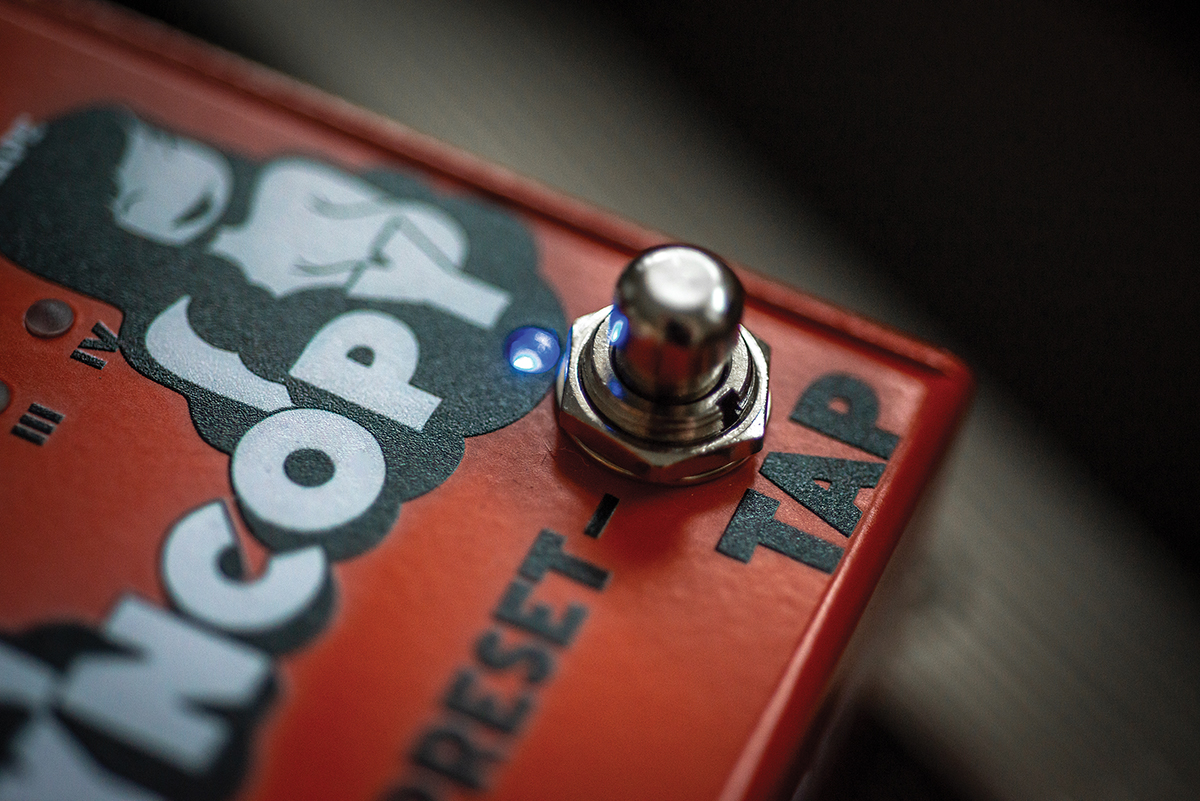 Changing the character of the modulation with an expression pedal has limited impact on its own, but does add an extra level of colour when that pedal is also controlling the main delay settings – and that brings us to the really fancy stuff. It’s undeniably satisfying to watch the LEDs spin round in opposite directions as the feedback goes up and the delay time comes down; luckily it sounds pretty spectacular too, with repeats spiralling off into brutal distortion while simultaneously skittering upwards in pitch. Mind you, with our pre-production unit at least, self-oscillation doesn’t always come on as eagerly as expected – at times, depending on input level and other settings, it can take some coaxing.

The Syncopy is a complex pedal, and not all players will appreciate its microscopic level of control over every variable of wobbliness you could want, but it’s great to have such tools available in an analogue delay – especially one that’s UK-built and, compared to most of its obvious rivals, quite affordable, too. 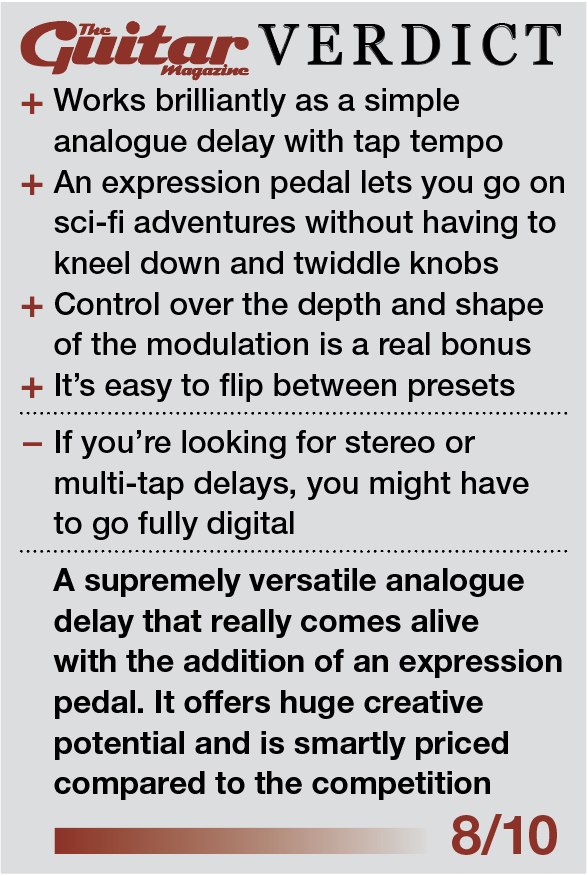