A floor-based, dual-track looper with effects, that prides itself on its simplicity… 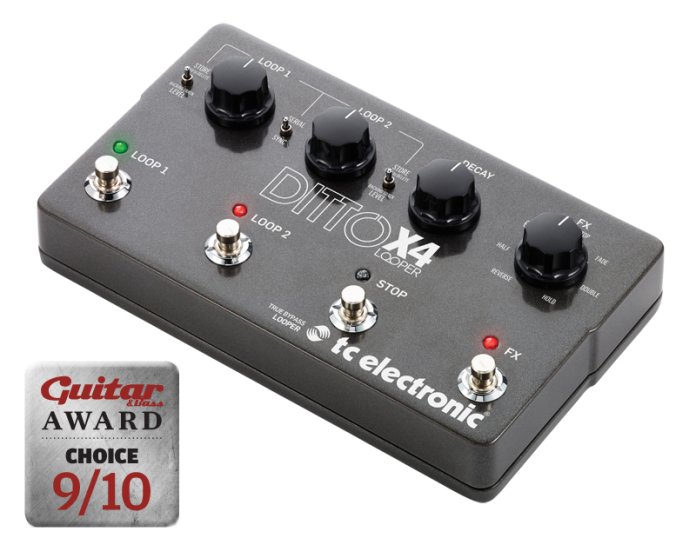 There is an extensive choice of loopers on the market these days, and some are significantly more complex than others. Not everyone requires an Ed Sheeran-style guitar orchestra, and it’s a fact that some looping workstations can cause you to spend more time thumbing through the manual than making music.

We can’t envisage any such issues with the new X4, the sixth member of TC Electronic’s Ditto looping dynasty. Its older brother, the Ditto, is simplicity itself, incorporating just one knob; and on the face of it the X4 comprises a pair of those same units in a single chassis. However, there’s a little more to it than that.

The two independent loop tracks, each providing five minutes of recording time, are assigned their own level knob plus an unlatching micro toggle that allows you to store the loop you’ve recorded for use elsewhere. You can also utilise either Serial mode, allowing you to switch seamlessly between the two tracks, or Sync mode, which lets you play both at the same time: this wouldn’t be possible with a pair of Dittos. A master decay control regulates the fade duration of older loops as new ones are recorded, and a seven-way rotary pot accesses a selection of loop effects that can be turned on and off via footswitch.

There are also stereo in and outputs, MIDI In and Thru ports, and a USB Mini B socket, plus four DIP switches that allow you to tailor a selection of the X4’s functions to your own tastes. Connect to a computer via USB to either export saved loops to your desktop or, equally intriguingly, import audio files into the pedal via an unfussy drag and drop interface. Although it took a few tries for the X4 to cooperate with our MacBook Pro, we wielded third-party rhythm tracks and sound effects with aplomb.

We placed the X4 at the end of our effects chain, although running loops through a vintage fuzz or echo pedal has its own undeniable charm, and we were up and looping in minutes. Constructing soundscapes and building parts was simple, and the loop effects certainly added a great deal to the mix. Highlights here include the established Reverse and Half Speed options, plus the marvellous Tape Stop that mimics an old tape player grinding to a halt, taking your loop with it. Very effective indeed. 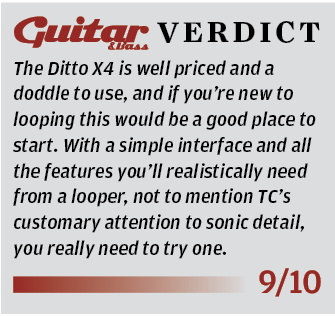