Could Major Thorpe's second offering be all Muffs to all men? We get a visit from the fuzz in the G&B review of the ThorpyFX Muffroom Cloud… 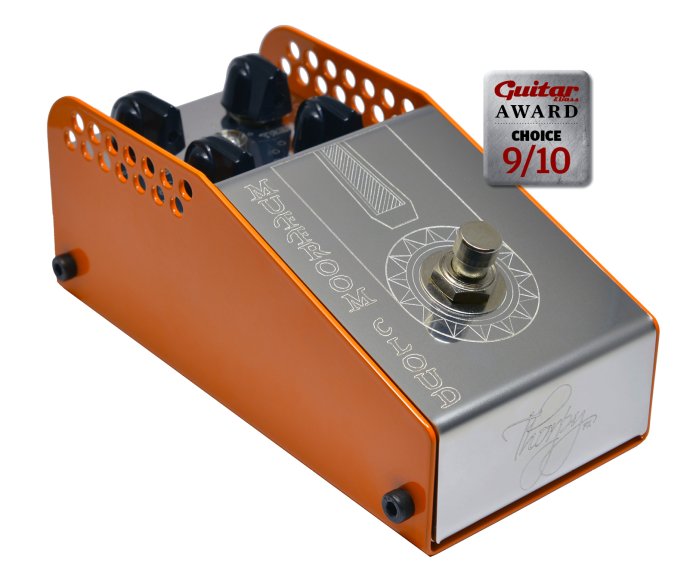 Regular readers will remember ThorpyFX from the Gunshot overdrive pedal we were wowed by in the August issue of G&B. As we explained in our Gunshot review, ThorpyFX came into being when British Army Major Adrian Thorpe turned to stompbox building to relieve the stress of his high-pressure day job as an explosive ordnance disposal specialist. And no, we’re not doing the bomb-proof build-quality gag again.

Following the hugely positive response to the Gunshot, Thorpe turned his attention to a different kind of drive pedal, based on the early Electro-Harmonix Big Muff π fuzz pedals built between 1969-73. Nicknamed ‘Triangle’ Big Muffs due to the orientation of the pedal’s three control knobs, there were approximately 17 variations on the circuit of the first production Big Muffs developed by Mike Matthews and Bob Myer. However, there was one particular vintage unit that Thorpe set out to beat…

“Of all the Muffs, Triangle Big Muffs have always been my favourite circuit,” Adrian explains. “I just find it really sweet and really articulate, but like all Muffs you can have a problem hitting the sweet spot with the tone control. Some are great and have the mids that cut through, but trying to find a vintage version that does that is hard. A friend of mine had a particularly lovely PNP Triangle Big Muff, and he loaned it to me, and I was like, ‘this is astonishing, what’s going on here?’

“So I opened it up and there’s nothing particularly amazing; there were no component value changes that I could see, but I couldn’t measure any drift of components. But it was a benchmark for me. What I wanted to do was achieve the same thing but with newer components and consistency. I tried to do it, couldn’t do it for a little while, then came up with the idea that the key thing was the EQ.

“The front end of the circuit is absolutely fine, it needs a few changes to lower the gain and suchlike, but actually it’s all about the EQ. I messed with different styles and ended up with an active tone stack – treble and bass – that actually came out of a vintage seventies audio unit. A friend of mine – Dan Coggins, who was the designer of Lovetone pedals and now Dinosaural – collaborated with me on it, and he suggested that this circuit was great because there’s so much scope for bass and treble, and when you adjust them the two overlap and you can get a peak in the mids or lower the mids, so that’s awesome.

“It sounds amazing in front of a JTM45 just on the edge, it’s incredible. It sounds great in front of a clean amp, but it cuts through. There’s plenty of sustain available, but it’s vintage-voiced. I will do something that’s a lot more raucous down the line… but now my friend who has the vintage one is selling it; he bought a Muffroom Cloud and said, ‘you’ve nailed it’.” 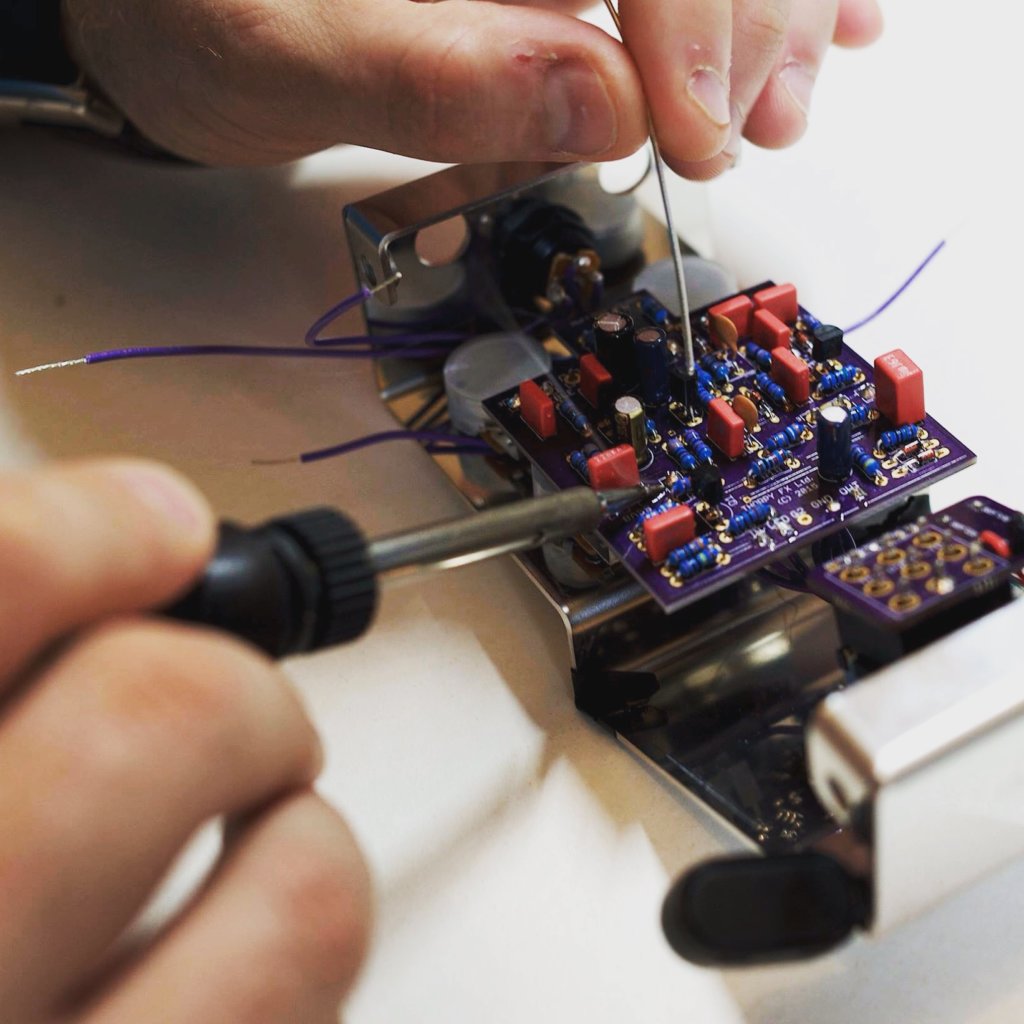 Arriving neatly wrapped in orange tissue paper inside its box, like the Gunshot, the Muffroom Cloud exudes class before you power up, thanks to a stainless steel enclosure with a laser-etched graphic depicting a stylised hydrogen bomb schematic and exceptionally robust external build quality. It’s not as big as it might seem, though; at only a few millimeters wider than a standard compact Boss pedal, the top-mounted Neutrik in/out jack sockets and nine-volt PSU connector actually make it more space-efficient in terms of width when it’s in situ on a pedalboard.

Inside, the Muffroom Cloud is just as smart and confidence-inspiring as its exterior, with a thick, gold-plated PCB housing metal film resistors with a one per cent tolerance and WIMA and Panasonic capacitors. Off-board, the volume, sustain, bass and treble controls are high-quality, dust-sealed potentiometers and the smooth-action, true bypass footswitch is rated at many thousands of cycles. Time to step on it…

Without the over-cooked distortion levels of some modern Big Muffs and Muff-derived circuits, it’s immediately apparent that the Muffroom Cloud makes it possible to retain a great deal more control. The presence of separate, active treble and bass controls is a real asset, allowing you to dial in the cutting high frequencies you need to be heard in the mix and then sculpt the body of the sound beneath; with a single tone control, most Muffs simply get thinner as you wind up the treble, but here you get to fine-tune the balance of girth and grit.

Like any Muff-style circuit without a gate, engaging the pedal lifts the noise floor, but it’s well within acceptable tolerances, and when engaged there’s enough definition and clarity for more complex chord voicings with the kind of subtleties that might usually get lost in a wall of fuzz.

Another result of the sensible level of gain on tap is that fuzzy alternative rock riffs and powerchord rhythms stay focused. One of our favourite ways to use the pedal was to keep the sustain and treble around 1-2 o’clock; even with the volume control dialled in to give the amp a serious kick, at band levels this provides crunchy raunch with a fuzzy rasp for rhythm parts with a sensible decay that’s still highly controllable, even when playing choppy or syncopated rhythm parts.

The Muffroom Cloud stacks well, too; with a variety of overdrives and boosts placed after it in the chain, or into an already driven amp, we were able to produce some wonderfully fluid sustain for Gilmour and Santana-style lead. The lower reaches of the pedal’s gain range are also worthy of investigation; there are some great raspy garage blues sounds to be found with the sustain around 10-11 o’clock, that bring Dan Auerbach’s early Black Keys tones to mind.

While hardcore Muff aficionados often have several models that they rely on for different tasks, we already know of several who reckon the Muffroom Cloud is the answer to their prayers for live use. It certainly sounds great when you turn it up in a rehearsal room, and where others fizz or collapse into an over-compressed, saggy mush, this pedal snarls and sings; all the while, because it doesn’t try to be too gainy, it remains responsive to picking-hand dynamics in a way that makes some, less sophisticated designs sound comically unsubtle.

If Muff-style fuzz is your once-in-a-set special effect, then there are cheaper pedals that will do the job, for sure. But if it’s a big part of your sound then we recommend that you check out the Muffroom Cloud before demand goes through the roof. ThorpyFX may be a small operation but, inside and out, the attention to detail exhibited by Adrian’s pedals results in a vibe that’s about as far from homemade as it gets. 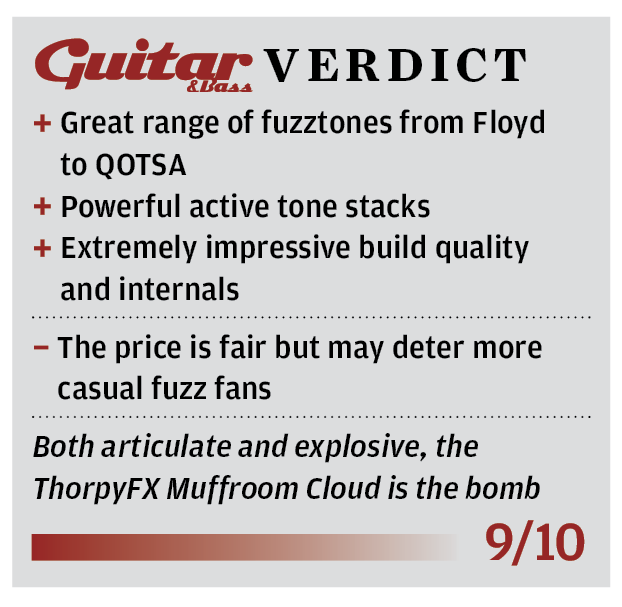 Description: Analogue fuzz pedal with active EQ, made in the UK