We’re no strangers to retro Rickenbacker electrics and basses, but ancient Ricky amps are a great deal less common. We power up this small and affordable 1960 M-8 combo… 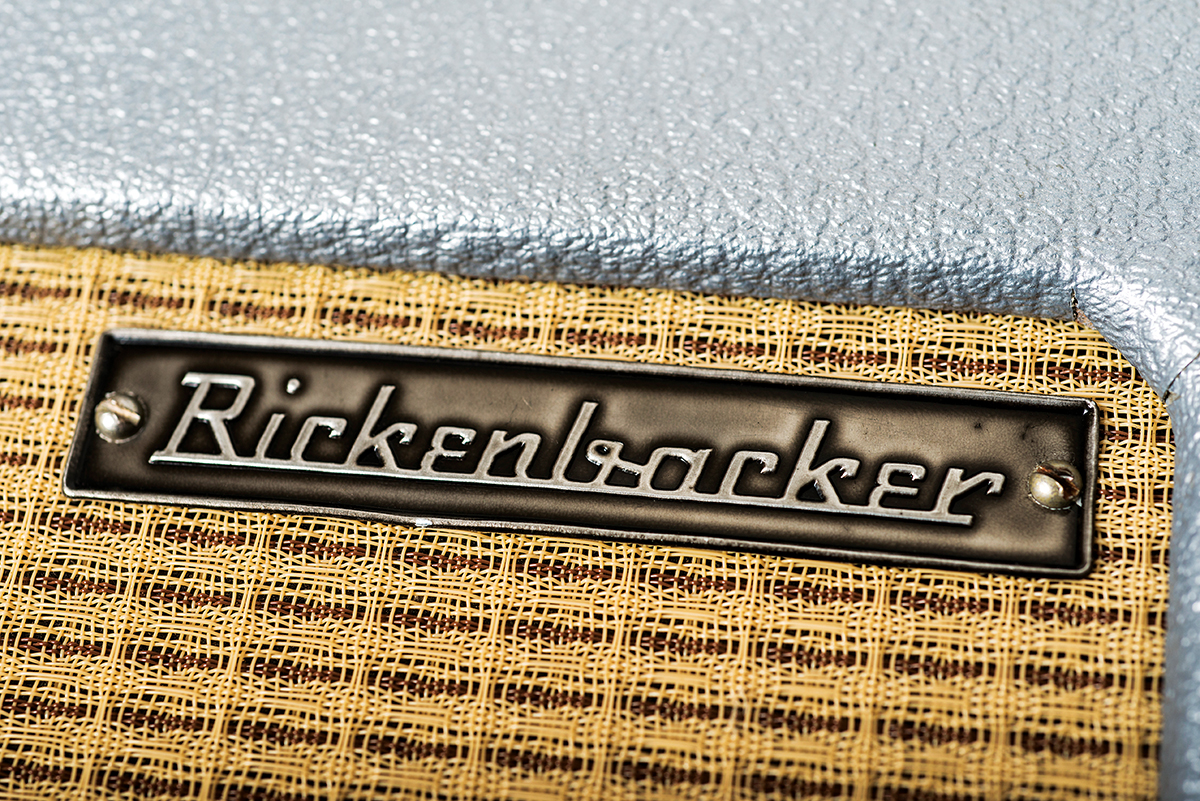 Last issue in G&B, you may remember us being rather impressed with Carr’s latest Mercury V, and it’s hard not to feel a sense of déjà vu when sitting down with this Rickenbacker M-8. Most strikingly, they have almost identical silver-grey tolex, and both also feature proper point-to-point wiring. That’s pretty much where the similarities end, however – in addition to the Carr costing almost 10 times as much as this old Ricky, they’re also very different inside. 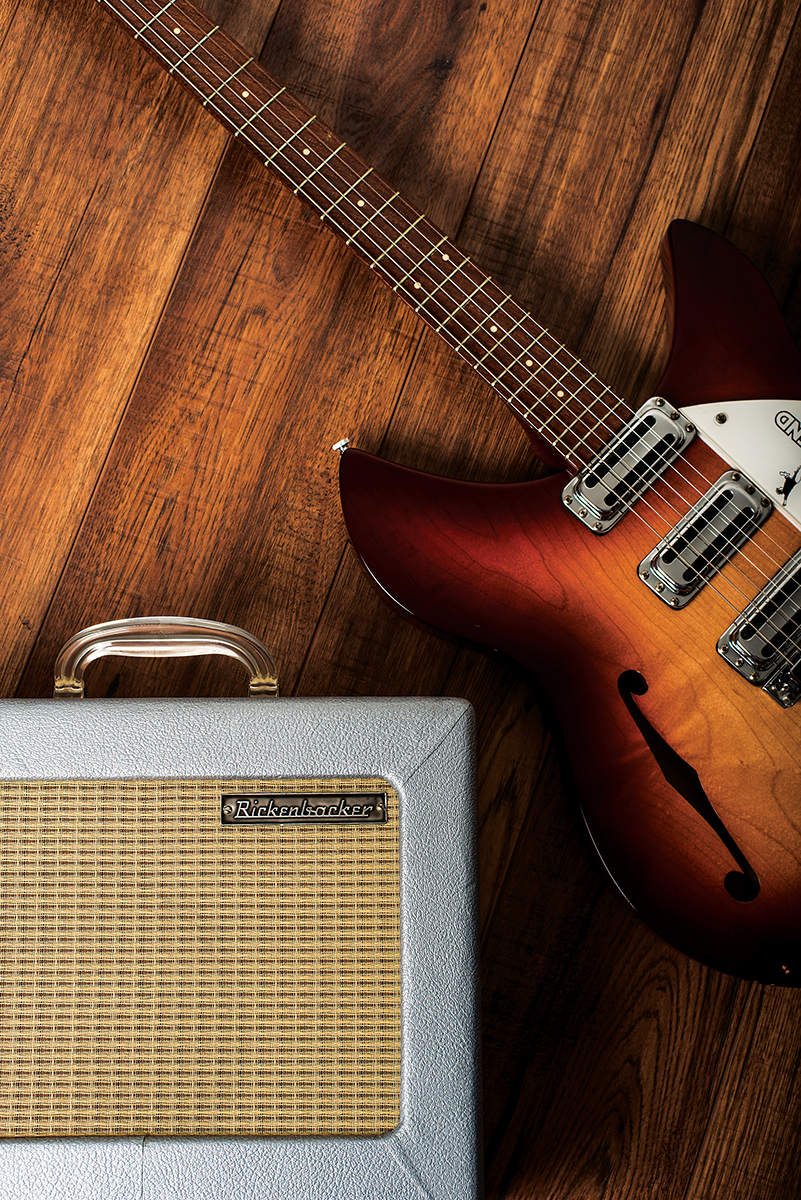 In 1953, FC Hall purchased the Rickenbacker company, and set about revamping the company’s amplifier line-up. The M-8 made its debut in 1955 – albeit as an unnamed amplifier that was packaged up with a ‘Student Hawaiian Guitar Set’ and the specs changed over the years with altered badge placement, different preamp valves and various types of tolex used to cover it. Judging by the code on the Jensen P8-U Special Design ceramic speaker on our M-8, I’d suggest it was made towards the end of 1960. 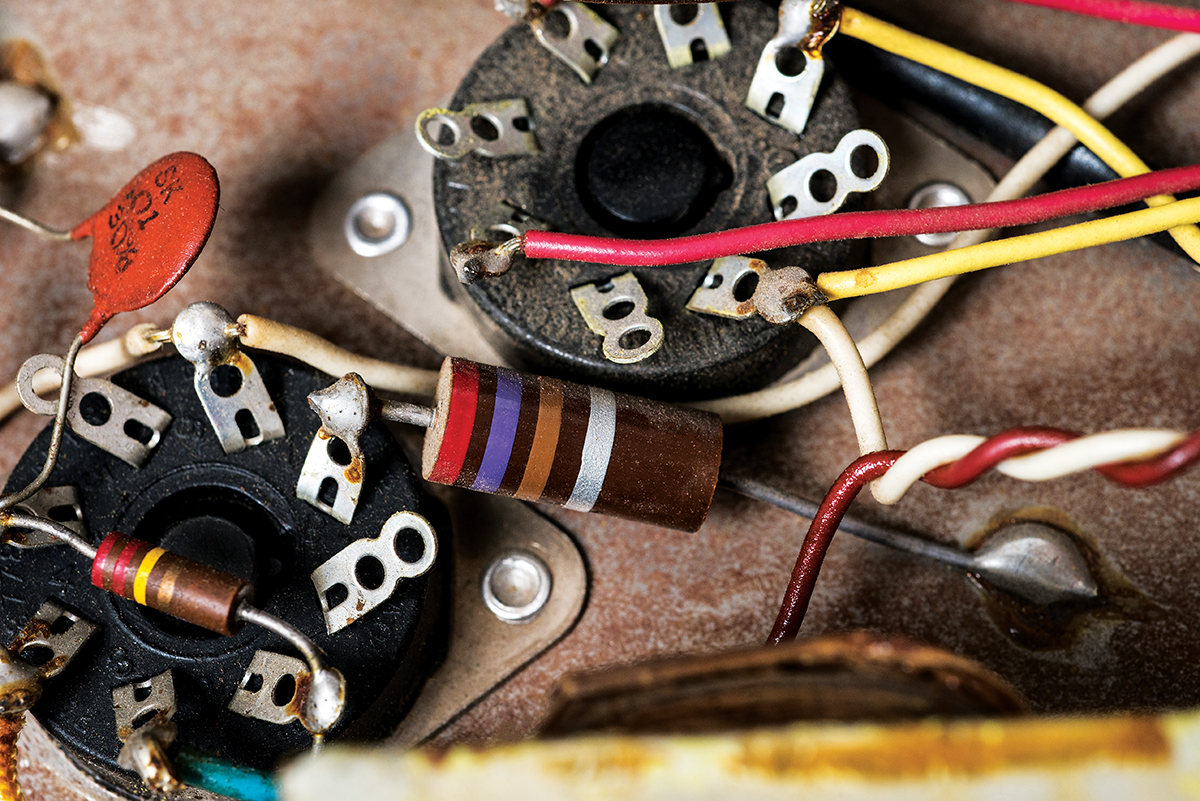 Some things remained constant with the M-8, however, including the 5Y3 rectifier and a single-ended 6V6 power valve generating around four watts. By the time this M-8 rolled off the production line, the oddball 6AV6 preamp valve had been superseded by a 12AX7. All the valves in this amp are vintage USA-made examples from General Electric and Sylvania and no negative feedback is applied in the circuit. 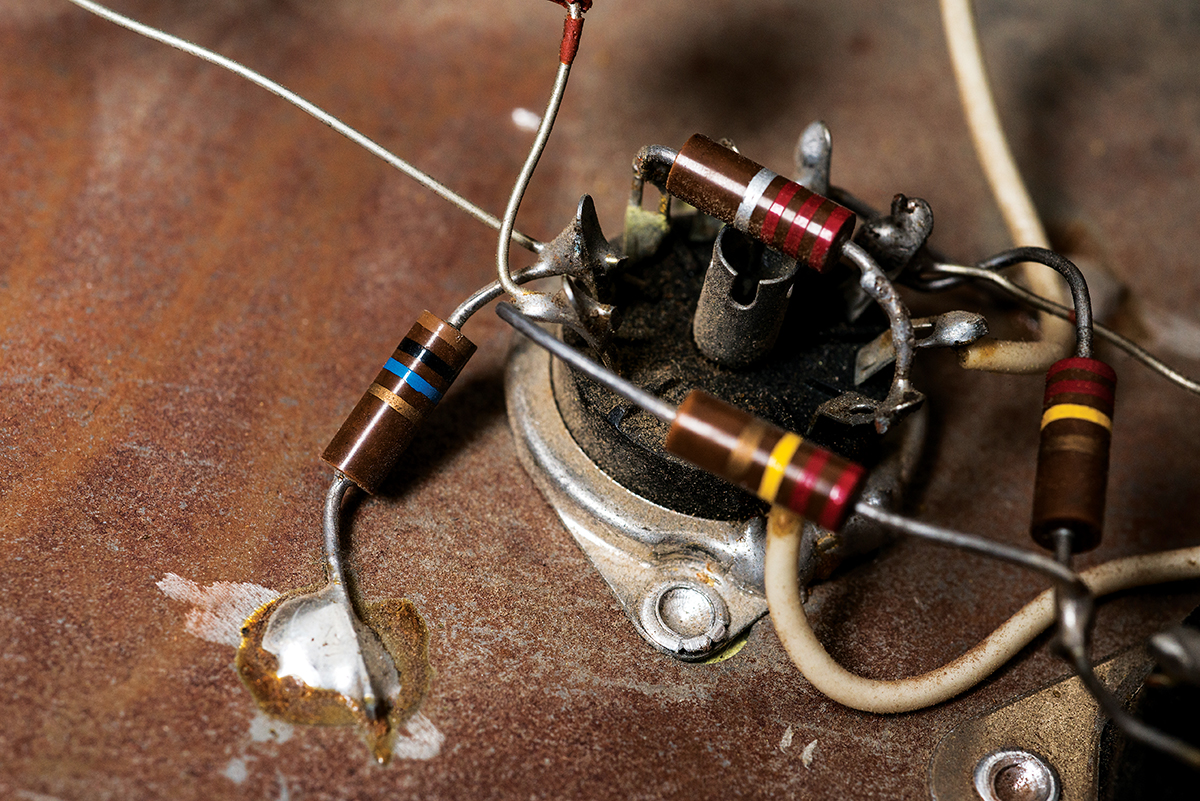 The cabinet is tiny but it feels surprisingly weighty and there’s a clear moulded plastic carrying handle that is quintessentially retro. The Gretsch’s simple control panel is located at the back and it’s angled inwards to create a protective recess for a single volume control that doubles up as an on/off switch. Adjacent to the fuse-holder there’s a jade green jewel light and the chassis is coated in silver hammertone with black silk-screened legending.

Two inputs are provided and they both sound the same, meaning that they were intended for multiple inputs rather than for high and low levels. The impedance rating isn’t marked on the speaker but it reads seven ohms on the meter, and research indicates that Rickenbacker did indeed equip its M-8s with eight-ohm speakers rather than the four-ohm speakers that are generally associated with Fender Champs.

In Use
First things first – the original speaker is utterly dire, with a death rattle fizz and an extreme boxy honk through the mids. There’s no doubt it needs a re-cone but even then I wouldn’t expect miracles. In fact it’s so bad I have to conduct all my tests on this amp using an external 12-inch speaker.

Rickenbacker placed the name badges on the left and right, and sometimes on the cabinet itself

What a difference that makes – I was about to give up on this M-8 but once it warms up and settles down, its true voice begins to emerge. I get the impression that the initial design brief called for rolled off bass and low mids so as not to over-stress the output transformer or speaker. It was also configured for clean headroom and it works up to a point – about half-way on the volume control to be exact. 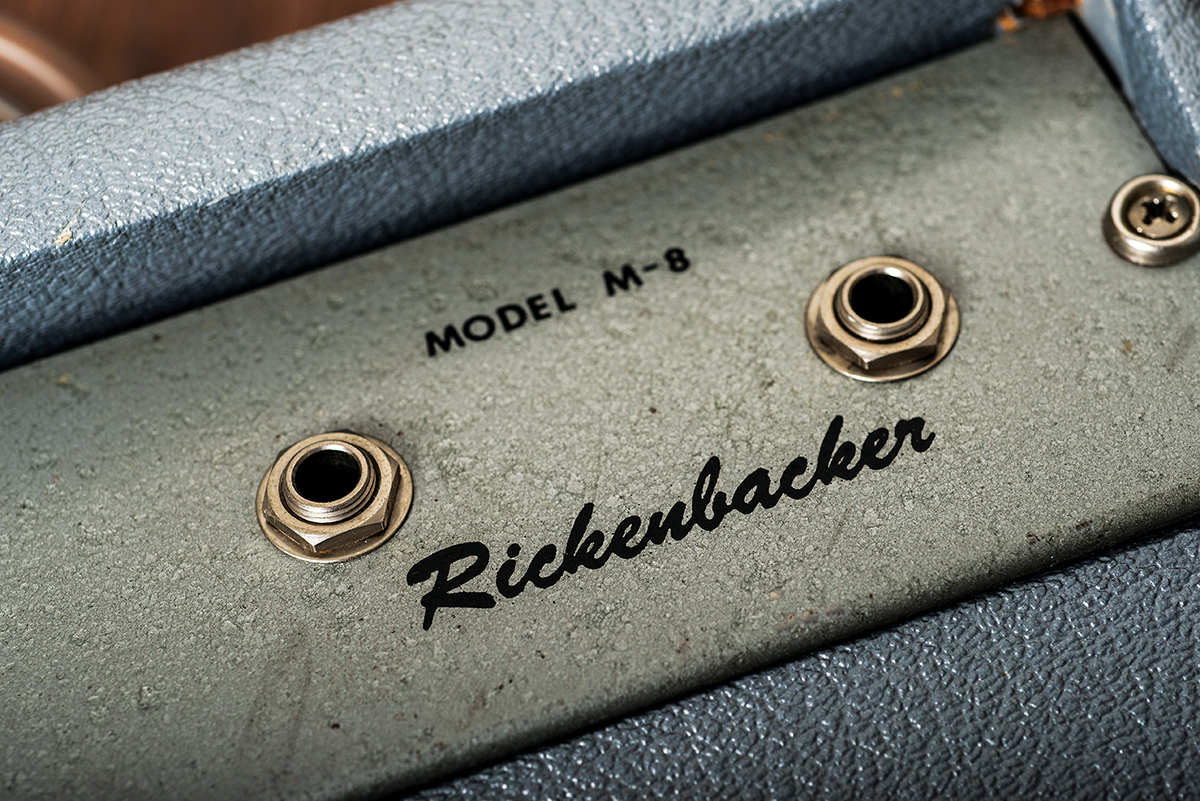 Rather than hi/lo, both inputs sound identical so you could repurpose one jack socket hole to accommodate a tone control

Below that, the M-8 sounds a bit dull and dark but push the volume control a little more and it quite suddenly comes to life with added sparkle and a general sense of the sound filling out across the frequency rage. From that point onwards, the M-8 gets increasingly compressed, overdriven and slightly brighter in tone.

As brightness increases the lack of bass and low mids becomes more apparent. Then again this amp sounds far from trebly and even borderline dark with some humbuckers. But with bright PAFs or vintage T-style pickups, the clarity is more than adequate and it cleans up nicely if you have 50s wiring and or treble bleed capacitors in your guitar. 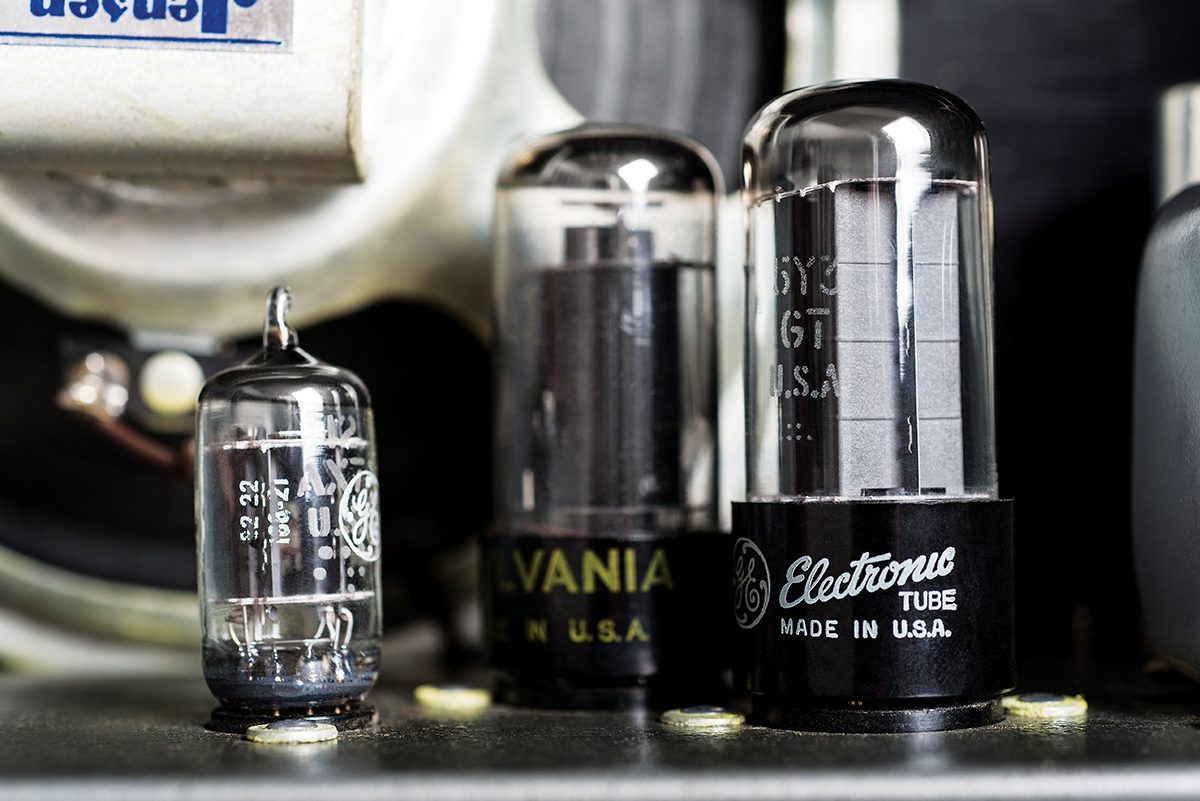 While low-power valve amps were once the stuff of starter packages for budding players, these days most of us buy them for overdriven tones at acceptable volume levels. If that’s something that appeals to you, then you should be interested in an M-8 because the overdrive sounds fantastic.

It’s smooth, harmonically rich and delivers exactly the sort of singing sustain that would normally require stompbox assistance. It’s an old-school tone that suits swampy slide and Texas blues grind perfectly, but given the absence of tone control and the bandpass filter aspects of the circuit, good results are largely dependent on quality pickups and effective onboard guitar controls. 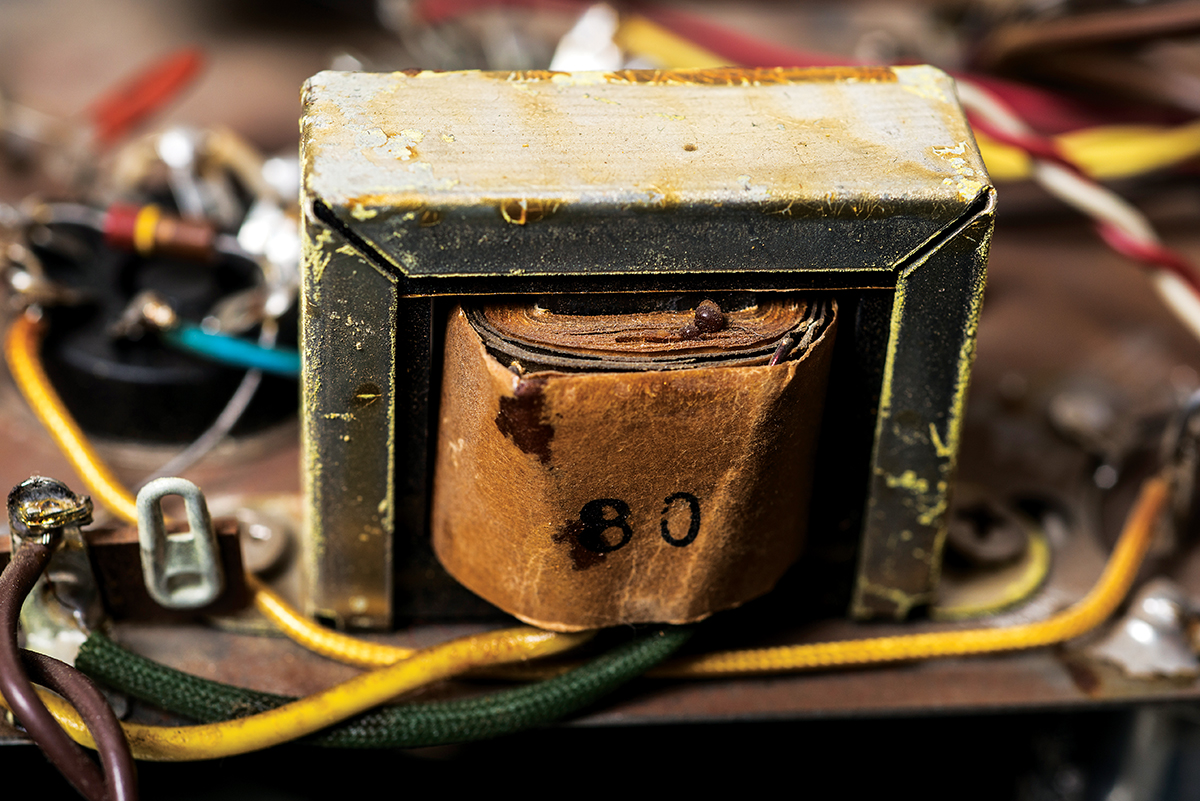 With just a cursory glance over the schematic I can identify several potential upgrades that might widen the M8’s frequency range, increase gain and afford a touch more frequency control. I’m talking about really simple things such as cathode bypass capacitors for the 12AX7 and 6V6, 100K plate resistors, a treble bleed capacitor and increased signal capacitor values. A simple tweed-style tone control could also be mounted in place of the second input socket. 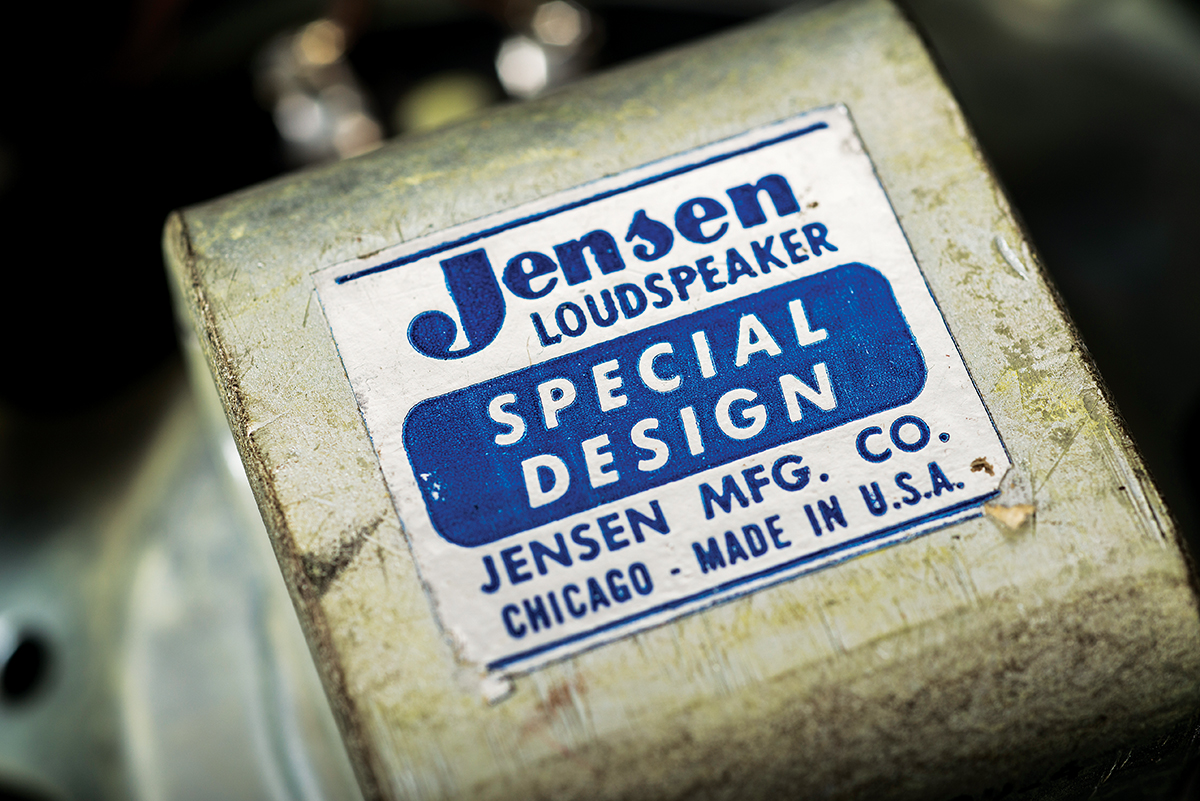 The amp still has its original Jensen speaker, but it doesn’t sound great

Added to that, I’d of course consider a speaker upgrade, but be warned that there isn’t enough space inside the cabinet for the usual Champ upgrade to a 10-inch. An accessible speaker jack would make it easy to connect the M-8 to an external cabinet, but in stock form the speaker wires are soldered to tags on the chassis, so you’d need to drill a small hole in the chassis. On the plus side, the eight-ohm rating broadens the scope for the speaker you could use.

All told, the electronic modifications would cost no more than £10 or so in parts and it would be a quick and easy project. While one might hesitate to tweak a collectable tweed Champ in such a way, the less valuable Rickenbacker M-8 seems fair game, and it would be more than worth it. 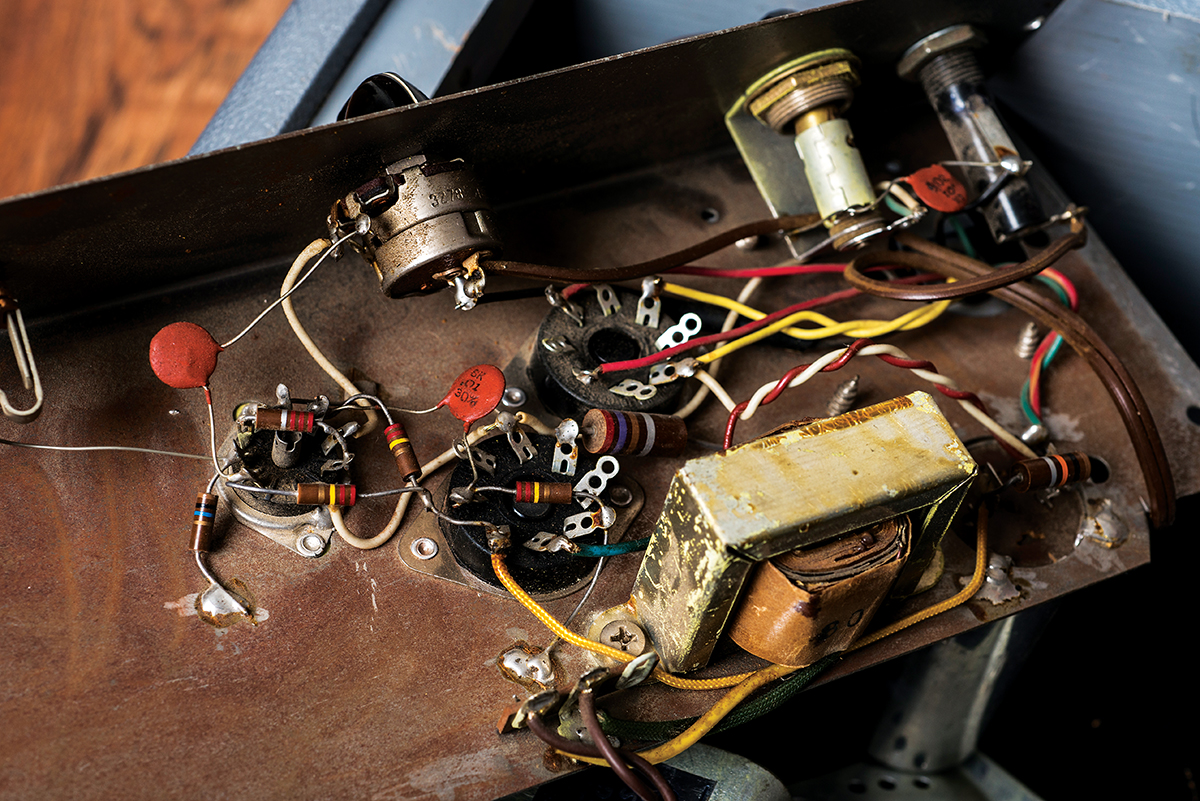 Although it looks chaotic, this sort of amp wiring is easy to work on and would make a great beginner’s project

There’s something of the wolf in sheep’s clothing about this amp – from a distance it looks cute and polite, but in a flash it can turn into a ferocious, snarling monster that will take your hand off! Played clean, the M-8 sounds mild-mannered and fairly ordinary but when cranked, it delivers the kind of creamy all-valve crunch and tenacious sustain that make it a worthy challenger for any Fender Champ.

Considering its age, the overall condition of this amp is excellent, there are no missing parts and it’s original down to the last screw. With cool vintage styling, the potential to upgrade and an affordable price tag, a Rickenbacker M-8 is well worth a punt if you come across one. 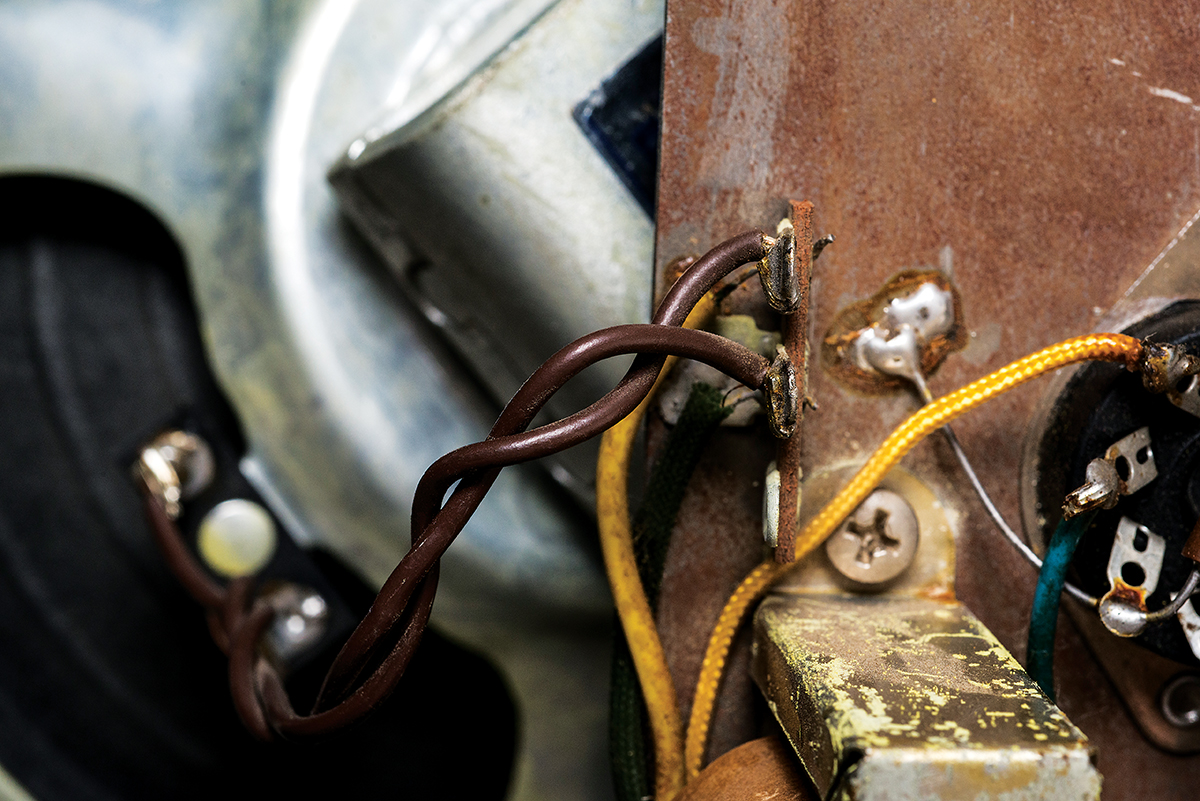 The two brown wires are speaker connections, but we would install a speaker jack to facilitate connection to external cabinets