This ash-bodied 1959 Jazzmaster sports a gold anodised pickguard and a blonde finish, making it one of the rarest and most collectible offsets in the Fender canon. Although its price tag that places it firmly in the wheelhouse of collectors and rockstars only, we wonder about the impact that ash has on vintage Jazzmaster tone. 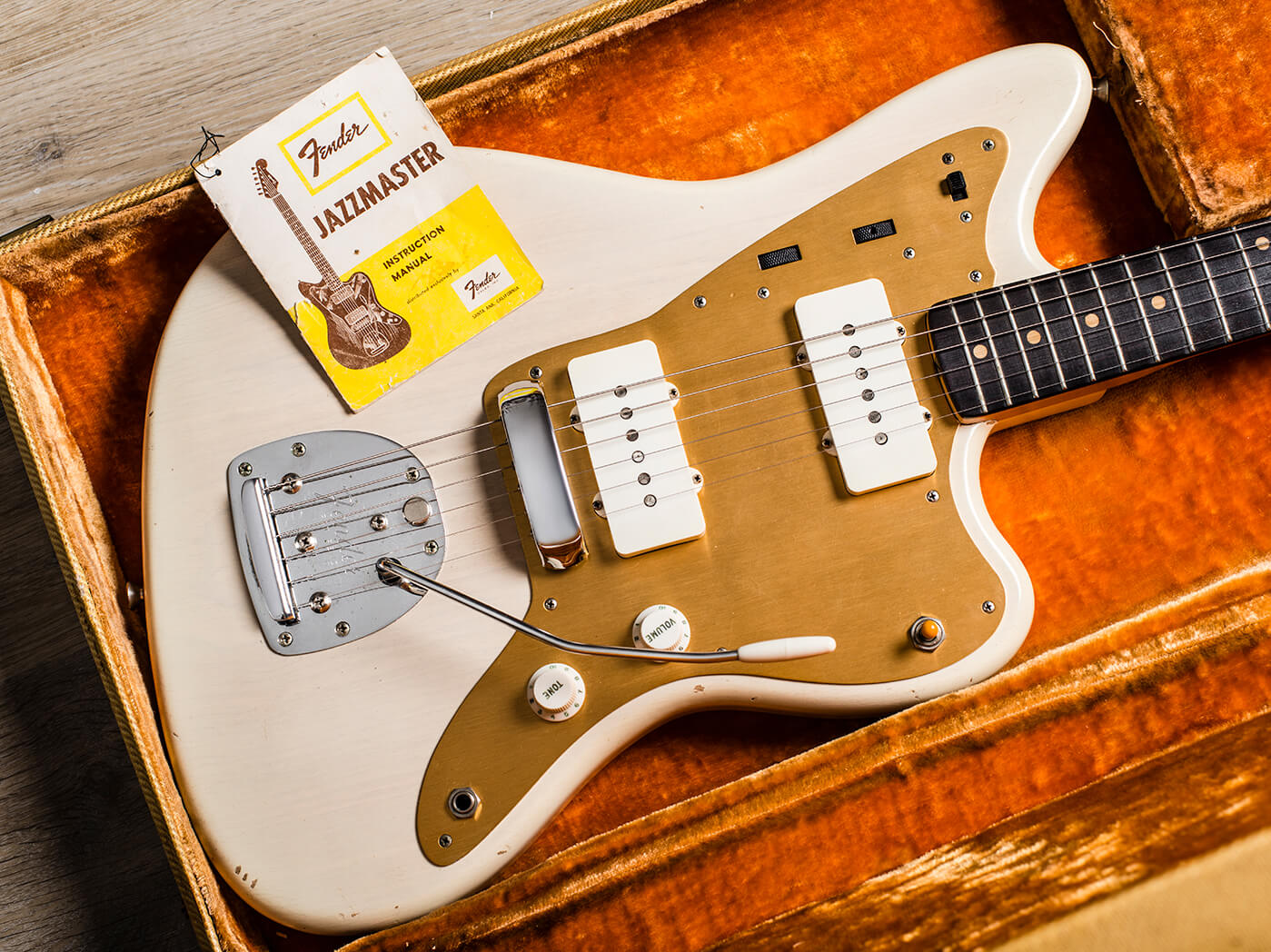 Had Fender approached Mary Kaye a couple of years later than it did, the most sought-after 1950s Fenders of all may have looked something like this. In fact, this guitar is probably just about as rare and collectible as Jazzmasters get – and it’s only the very earliest 1958 examples with black pickup covers and metal knobs that might trump it.
It’s still a very early one, as evidenced by the gold anodised pickguard. Leo Fender was obviously keen on the idea, no doubt as a method for reducing the interference that plagued his preferred single-coil pickup designs.

He tried it first on Stratocasters, then Precision Basses and the Duo-Sonic and Musicmaster before the earliest Jazzmasters. The issue with Fender’s gold anodised guards is that the outer layer is only a few microns thick and soon wears through to the silvery aluminium beneath. It’s the same sort of premature aging that prompted Fender to switch to rosewood fingerboards during the same period. 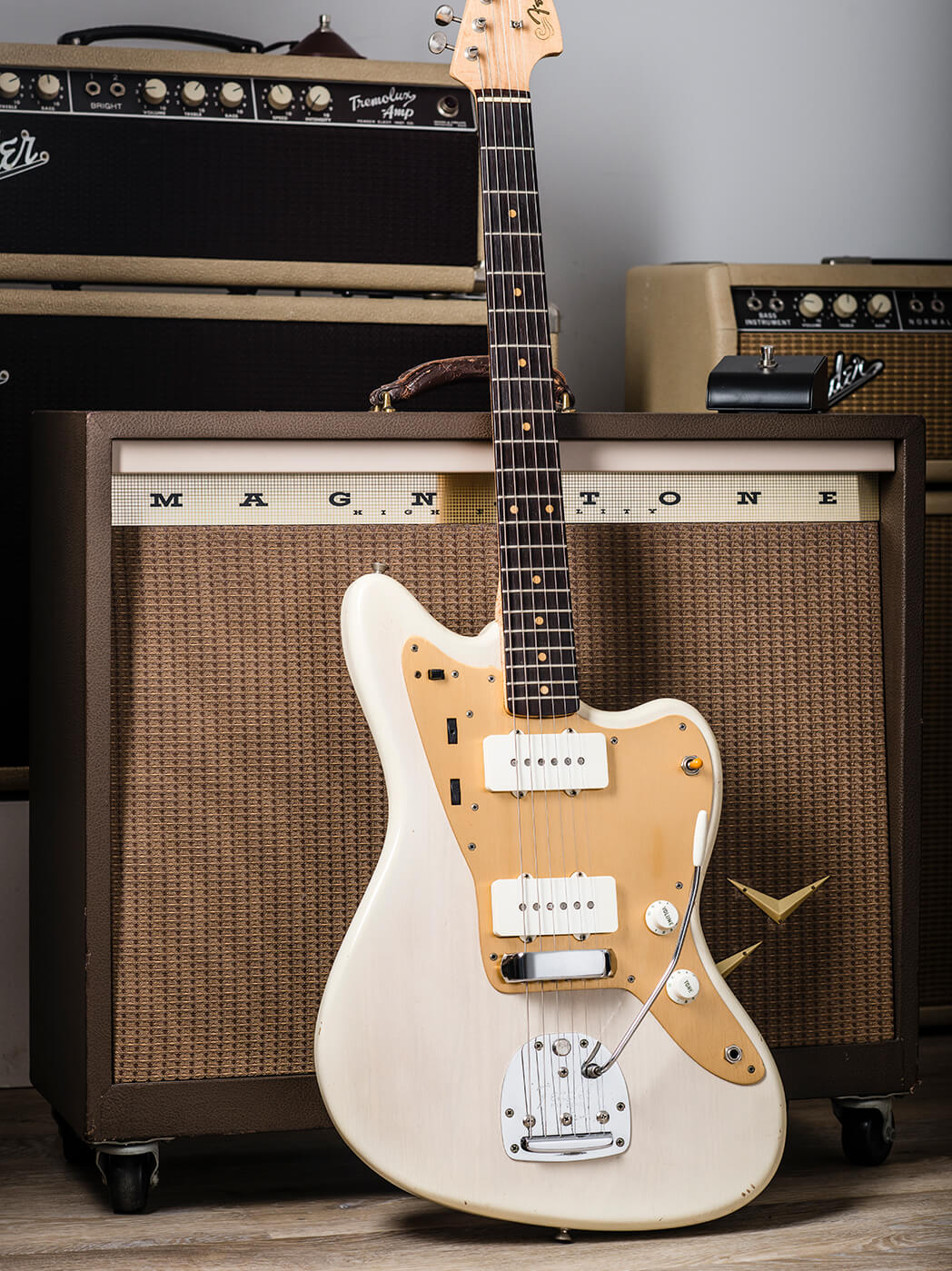 Although it was only used for a year or so, the aluminium pickguard itself doesn’t make this guitar especially rare. But the blonde paint-job certainly does and the finish corresponds with a feature that’s even rarer for Jazzmasters – an ash body. It’s such a stunning look and quite something to behold in the flesh.

The lacquer has a semi-opaque off-white colour that’s sprayed heavier around the edges and the sides, much like a ‘one tone’ ’burst. By maintaining a thinner finish in the centre, the ash grain comes through, with a distinctive bluish tint that some have likened to blue-veined cheese, although it’s much more visually appealing than that description sounds. You also see this effect on late-50s Teles, Esquires and ‘Mary Kaye’ Strats. It’s particularly visible on the back and as far as we can tell, this guitar has a one-piece body. 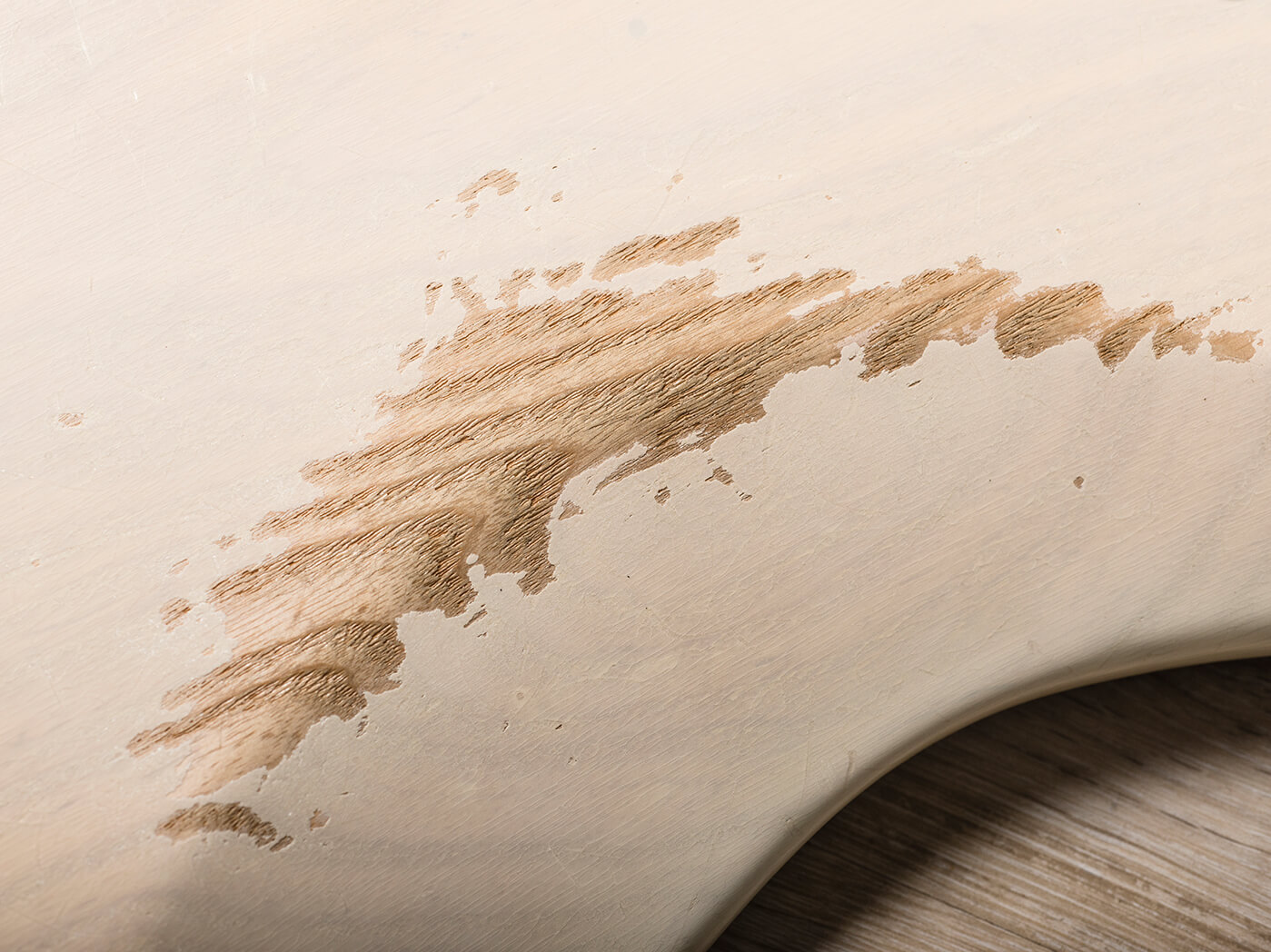 Besides a small area of buckle rash along the edge of the belly contour at the back of the body, the paintwork is in incredible shape. We love how it’s gassed off to a vanishing thinness and sunk down into the grain. Players who aren’t vintage-guitar enthusiasts would probably ask for a refund if a luthier returned a freshly sprayed body that looked like this, but there are those of us who are would probably pay a significant premium for it!

The neck’s finish is in even better condition than the body’s. The clear lacquer has retained its pale, factory-fresh look, which means that the side dots are easy to see. A friend of ours who owns a few well-worn vintage Fenders had never even noticed that they had side dots, so it’s no small thing! 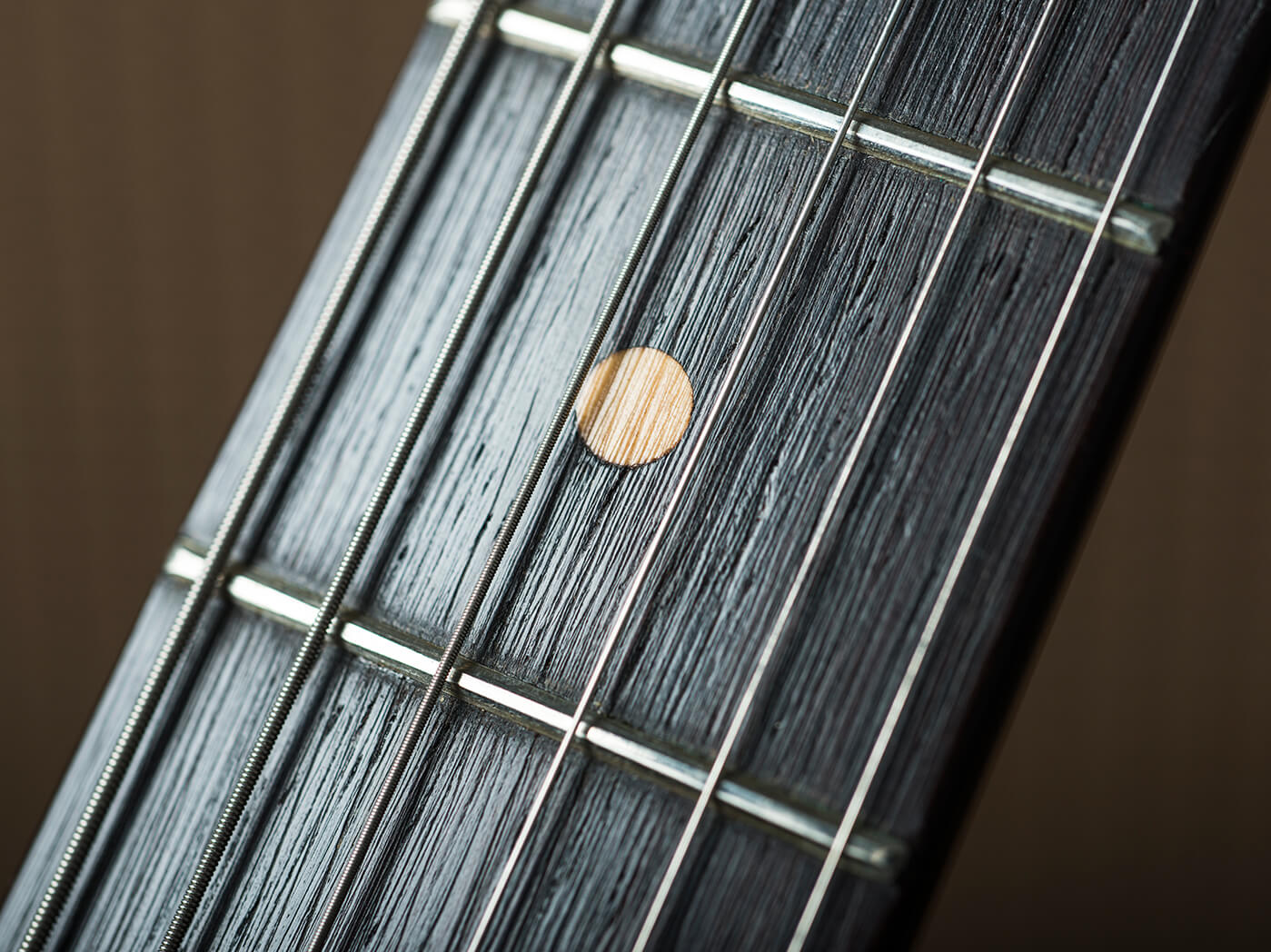 One of the advantages of anodised pickguards is that they don’t shrink. It’s quite common for celluloid pickguards to shrink so much that they clamp the pickup covers and prevent you from adjusting the pickup height. With this guitar, you’ll have no difficulties setting the pickups exactly as you want them. 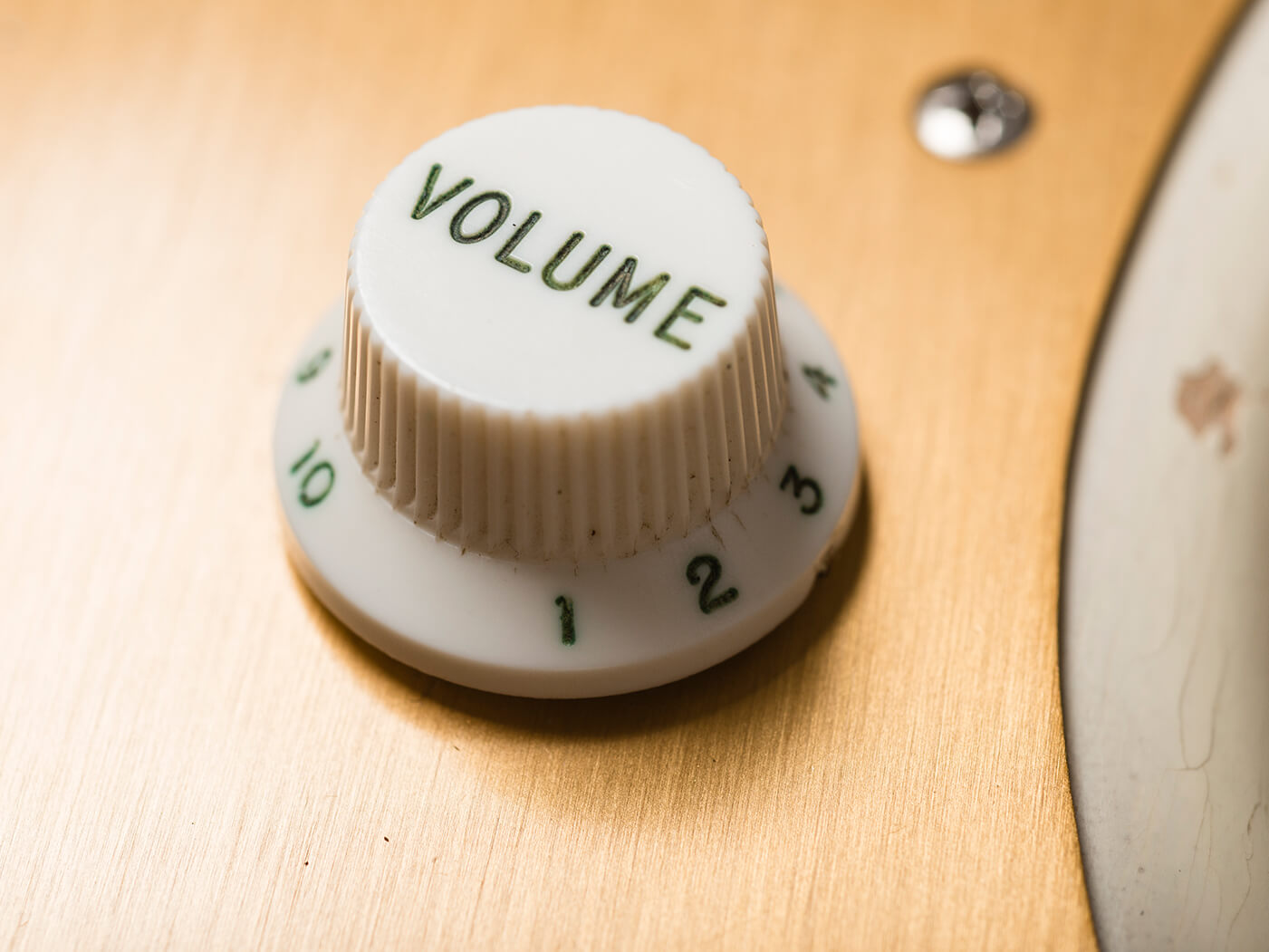 Commensurate with the rest of the guitar, the plastics are clean, shiny and unworn. There is some verdigris in the knob lettering, but we feel that enhances rather than detracts from the look. The amber switch tip contrasts, but also tones with the overall look.

Clearly, this guitar has been played – but not that much when you consider its age. This means the dark Brazilian rosewood fingerboard is as fresh looking as the back of the neck and the original frets are almost completely unworn. You can still see the sanding lines on the clay dots and rosewood from when the ’board was radiused.

The acoustic tone is even better than expected and further discredits the theory that immaculate vintage guitars are always the least impressive. Compared to an alder-bodied Jazzmaster of much the same vintage, this blondie sounds louder, brighter and a lot clearer. We also hear longer sustain and far more harmonic overtones.

It could be argued that it’s some distance from the vintage and reissue Jazzmaster tone that many of us carry in our heads. Furthermore, if you like the darker toned, sustain-challenged woody thunk that typifies many Jazzmasters, you might not appreciate this guitar. But if you’re more partial to Strats and Teles, you may prefer the blondie’s combination of ingredients. 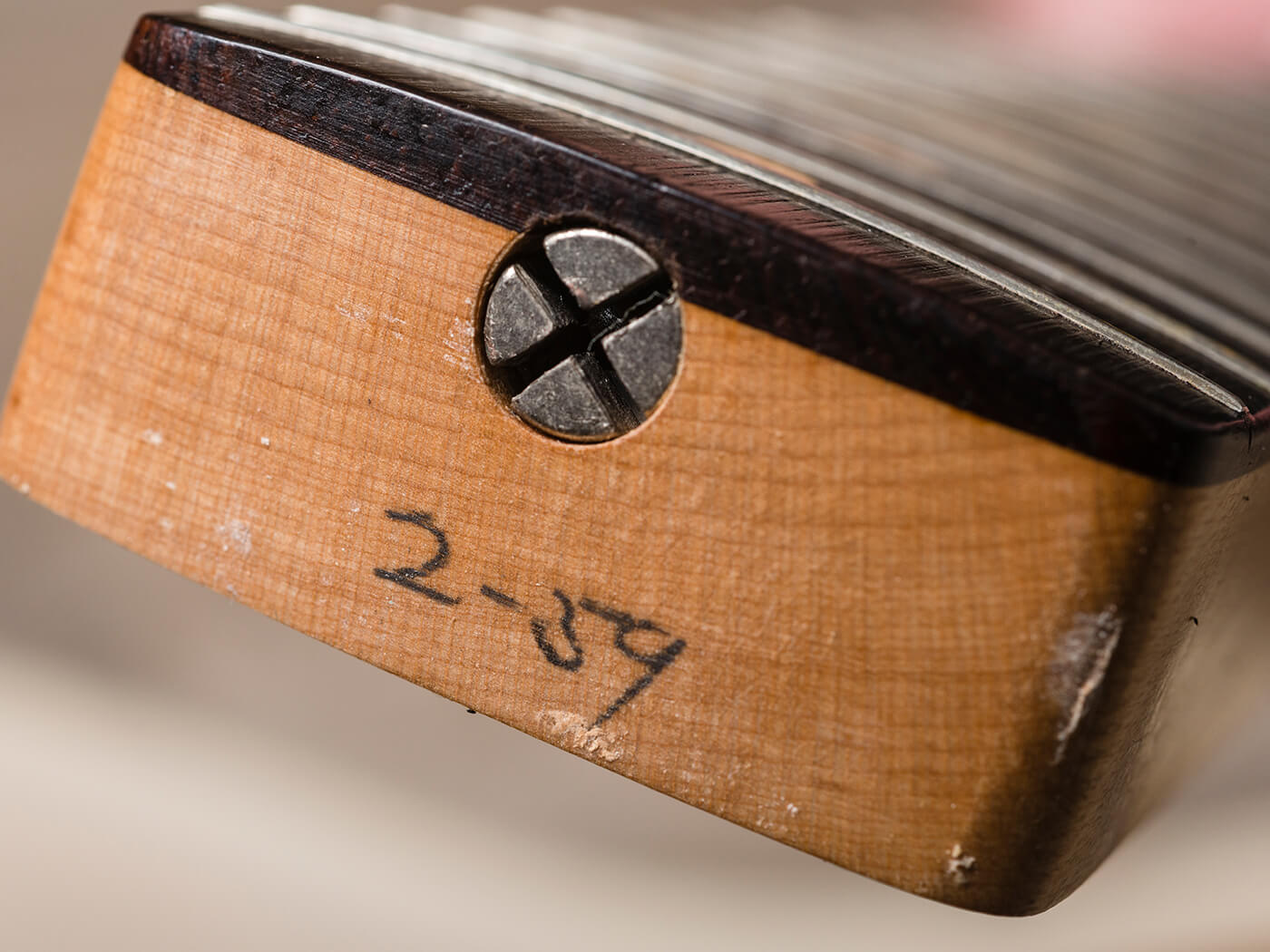 It’s worth mentioning the neck profile: here, the ash and alder examples are near identical. We associate Strat necks from this era with a flatter ‘D’ shape, but the shoulders on the Jazzmaster are significantly softer and the whole thing feels extraordinarily comfortable and easy to play.

As we hoped, the acoustic characteristics we like so much are captured and enhanced by the pickups. The bridge has a hint of quack and a lot of wiry twang – much like a brighter-than-usual early 50s P-90, but minus the aggression. The neck setting is equally bright, if not a tad brighter, but it’s also rounder, fuller and a whole lot sweeter. No wonder Leo Fender imagined jazz players flocking to this model and bringing the serious muso credibility he so wanted. 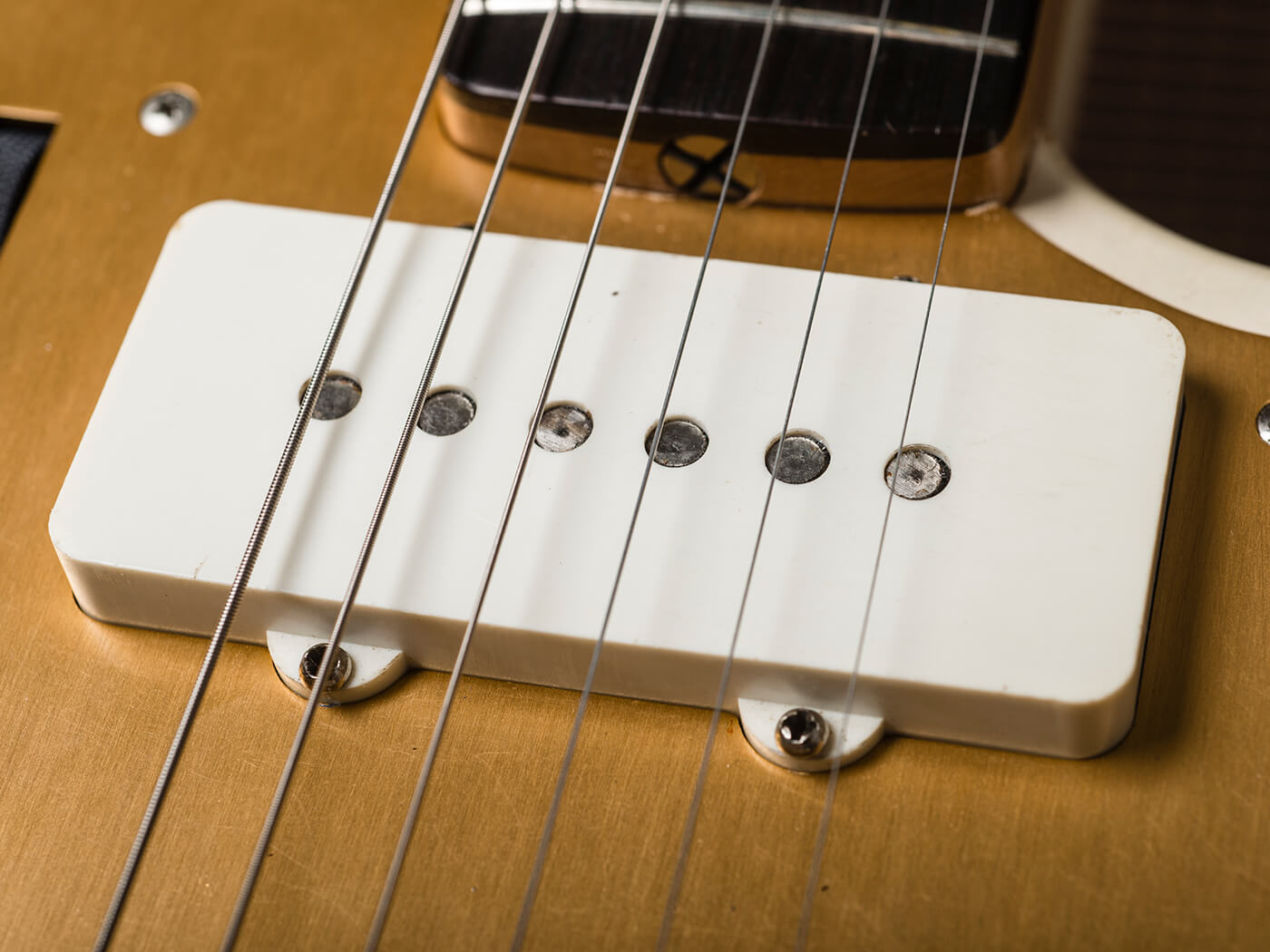 But to our ears, the middle setting is where this guitar really comes alive. With the hint of phasey mid-scoop this produces, the tone becomes an almost ethereal wash – especially when you introduce the vibrato arm into the mix. The much darker ‘rhythm circuit’ tone is still something of an acquired taste that tends to find favour with experimentalists and pedal junkies.

Although Strat vibrato units have set the standard since 1954, we think the Jazzmaster design is just as good in its own way. Granted, you can’t dive bomb and do all those spandex-rock party tricks, but for pitch-shifting chords, micro bends and shoegaze-y discombobulation, a well set-up Jazzmaster vibrato is hard to beat. They’re musical, can demonstrate impressive tuning stability and the low-profile design makes them so easy to use.

In short, this is easily the most inspiring Jazzmaster we’ve played so far. It’s also the most expensive by a considerable margin and we would hazard a guess that its new owner won’t be dragging it to any 1990s indie revival nights at Camden’s scuzzier drinking establishments.