On sophomore album Emotional Creature, Beach Bunny buck the expectations that followed in the wake of their viral TikTok track Prom Queen. We find out more. 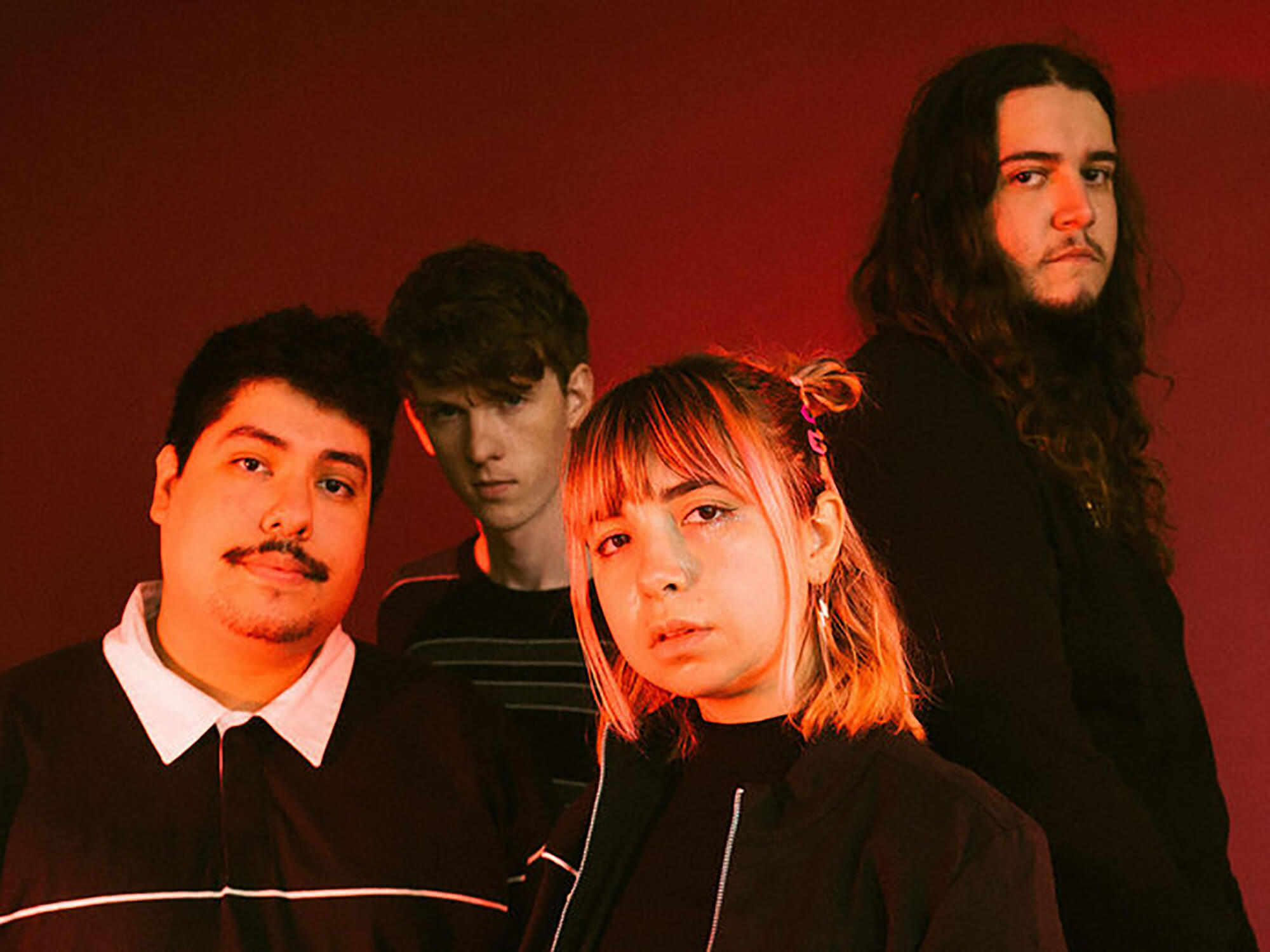 Beach Bunny’s Emotional Creature offers several potential avenues of escapism. In a very immediate sense, there are the sugar-rush melodies of guitarist-vocalist Lili Trifilio, presented here so as to whip the listener back to the slick, crunchy guitar-pop that made its home at the top of the charts around the turn of the millennium.

Then there are the sci-fi visuals and eye-popping artwork, which offer a colourful, imaginative answer to the yawning space opened up by pandemic lockdowns. “The sci-fi stuff pulled me out of the current reality,” Trifilio says. “It was something so different that I became really fascinated with it. A lot of the themes on the album, at least visually, have come from old sci-fi films.”

“It was kind of freeing,” she continues. “I think it allowed me to detach from the songs a little, especially some that, maybe at the time, I was more emotionally charged by. In a way, it gave me something else to pivot and focus on. I find, in general, if I’m doing multiple creative things at the same time, they kind of help each other. If I’m writing lyrics and if I’m drawing for fun, suddenly, while I’m drawing, I’ll get inspiration for the lyrics or vice versa.”

Emotional Creature is Beach Bunny’s second LP, and it arrives at an interesting time. A few years ago, the Chicago band – completed by guitarist Matt Henkels, bassist Anthony Vaccaro, and drummer Jon Alvarado – became one of many indie-rock bands to blow up on TikTok, when clips interpreting their 2018 track Prom Queen became an online hit. That groundswell of support, though, was a double-edged sword.

“Of all the confessional, female-fronted indie-rock bands to flourish in the past decade, Beach Bunny is perhaps the most shrewdly tailored to the whims of the social internet, where everything, especially the misery and humiliation of youth, is molded into a bite-size piece of comic relief,” the New Yorker’s Carrie Battan wrote in 2020, neatly creating a box for Beach Bunny to reside inside forever.

A healthier view of the phenomenon is that it’s a beginning rather than an ending. The kids aren’t always stopping at one song, with viral content opening doors to back catalogues and reshaping audiences at a rapid clip. “I didn’t even really know what TikTok was,” ​​Trifilio says. “It was strange to hear that something’s going viral, and I was like, ‘Well, where do I find that?’ I feel lucky that TikTok seems to have transcended what it once was. At the time, I definitely had mixed emotions. Yes, I’m gaining this fanbase but is this going to be like an internet, quick-up-and-down kind of thing? 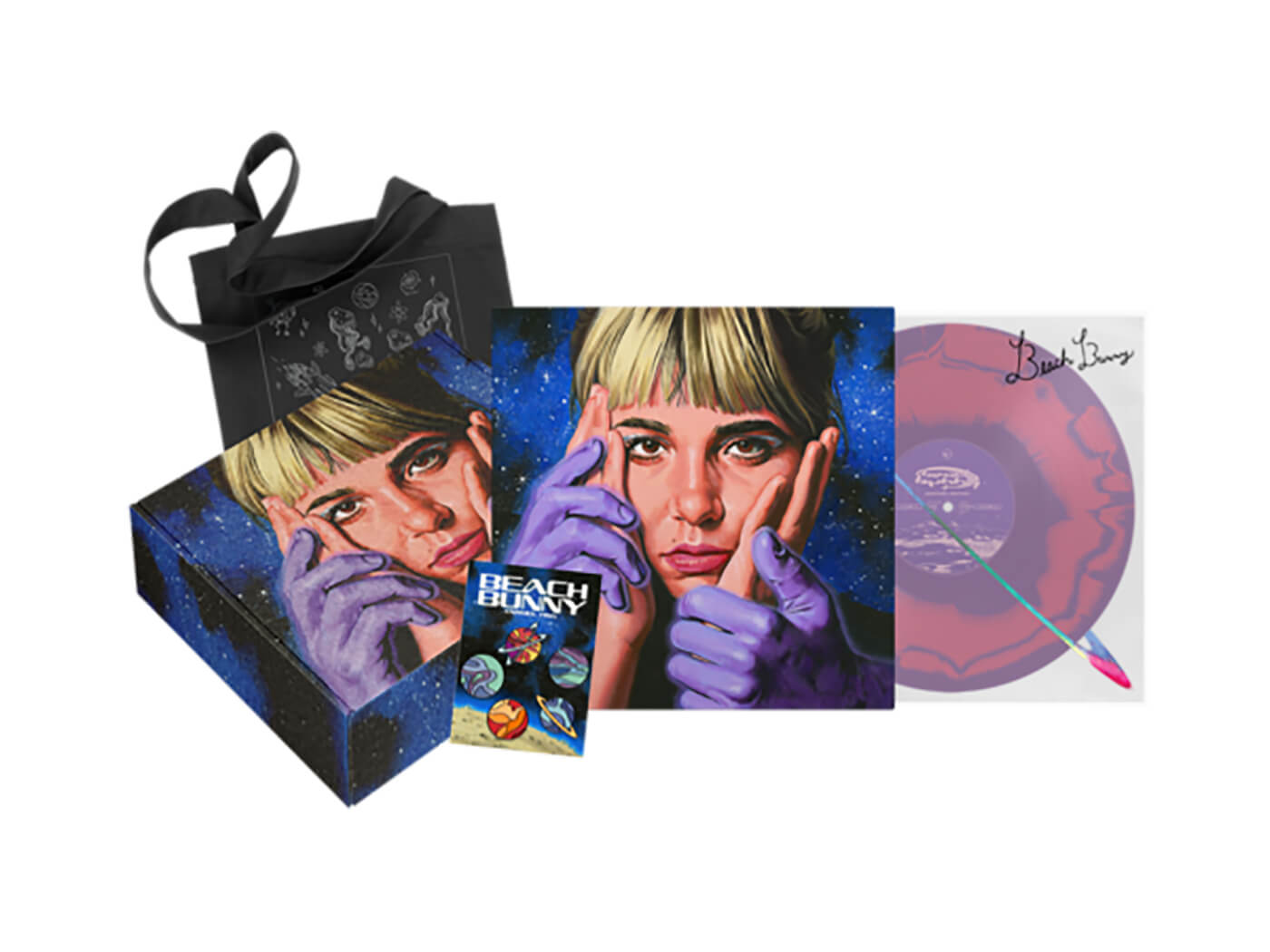 “It happened so fast that I think I’m still processing it, at least when it was at its peak. It’s interesting to see the reflection when it comes off TikTok and we see it on Spotify and at shows and stuff like that, where it’s the mix of the old people that would come, which were, like, punk kids and people that want to mosh and stuff. And then you have a front row that’s full of like 14-year-olds and this is their first concert ever. I feel like I’m almost like the orchestra leader where I’m like, ‘Alright, you guys mosh but watch out for the kids! And maybe you want to try moshing, that could be fun? But be safe!’”

It’s telling that Emotional Creature represents another shift in style and approach, with expectations being blunted at the first available opportunity post-virality. Where Prom Queen represented Beach Bunny’s bedroom pop beginnings – Trifilio started the project while at college – through its insular lo-fi balladry, and the band’s first album Honeymoon squared its easygoing indie-pop with warm, unhurried emo under the stewardship of Hop Along guitarist and producer Joe Reinhart, here Trifilio has gone all in on a sound that is clean, vibrant and challenging to the fundamentals of her songwriting.

Any hint of jangle has been wiped from the board, replaced by guitars that prioritise maximum crunch at every turn, setting up choruses that swoop and glide with a genuine sense of assurance. Removing the looseness from the arrangements means that each melody has to stick the landing. “I’m lucky that the songs just kind of came to be,” Trifilio says. “There were definitely some that were tried in the studio, and they just didn’t work. I’ll try to rework them for a future record.”

Calling up moments from recent pop and rock history – the guitars hitting in Kelly Clarkson’s Since U Been Gone, the melodic verve of Motion City Soundtrack, even the DIY exuberance of Maura Weaver’s songs with Mixtapes – Emotional Creature was brought to life with the help of producer Sean O’Keefe, whose breakthrough came with Fall Out Boy’s debut Take This To Your Grave and Plain White T’s’ mega-hit Hey There Delilah. “He was so wonderful, so helpful,” Trifilio says. “He was very open to ideas, and he also just knows his tech very well. So there was no waiting around. It was like, ‘Let’s try something, see if it works. If it doesn’t, that’s fine.’ I think that was really freeing to be in an environment like that.”

After completing touring on Honeymoon, Trifilio was at her parents’ home when the pandemic got its claws in. She started writing and experimenting but, with her bandmates out of reach, the songs remained as acoustic demos rather than the fleshed-out blueprints that the band had previously worked from. That meant that when Beach Bunny convened at Chicago’s Shirk Studios with O’Keefe, there was still some work to do. “When we got there, it was like, ‘Alright, here’s some kind of plan, but let’s also just try things and see what works,” Trifilio says.

“I think the great thing with Sean, and with Joe, was that if I showed a part of a song I like to them, they kind of know what pedals will get you there,” she adds. “So I think there was a lot of of that, of me of being like ‘I’m not sure what knobs to press but can we try to get it like this?’”

On Emotional Creature, Trefilio stuck to her Telecaster fairly closely, mixing in the odd Strat, having left behind the Squier Jazzmaster that propelled her early work. “I had a lot of college friends who were all into math-rock, and my ex-boyfriend had one,” she recalls. “I didn’t know anything about guitars. I was like, ‘Well, if everyone’s playing that, it must be the guitar to get’. But I also grew up having an acoustic guitar before I even went electric. I made the switch to Tele once I kind of outgrew the Jazzmaster.”

“I love the tone of Teles,” Trefilio adds. “I’m kind of having this dilemma where I have back problems and the Strat I have is a lot lighter. So I might be making the switch just for performances. But I find that Teles are very forgiving for the sound I want to get to. It’s usually pretty quick.”

By keeping her own setup as simple as possible, Trefilio freed up time in the studio. Rather than focusing on herself, she used all of its tools to fill out the songs, sliding Juno synths into the mix alongside whirring organs and, on Scream, even a snatch of a song belonging to the loneliest whale on Earth. “I think we were getting to a point in the studio where we were kind of losing our minds,” Trefilio says. “Sometimes we would look for free domain sounds. We were just talking about this whale, like while we were eating, and then we were like, ‘What if we found the song we put it on record?’

“There was a lot of experimentation in the studio,” she adds. “But I think one thing I was focusing on that was slightly different than the last record was adding a lot more depth of layers, just so all the songs would sound bigger. Pretty much every song on this record has at least a synth really tucked away in the background, or like a soundscape tucked away, just to make it big.”

When Beach Bunny first became a thing, Trefilio’s songs weren’t intended to travel much further than the outer reaches of her group of friends. That they have broken out is partly down to the internet and circumstances beyond her control, but the other side of the band’s success is much more traditional: good hooks and a personal message that people can understand and relate to.

“Even the first two EPs, they were made public but it definitely was more for my college friends,” she says. “And that was my aimed audience. I didn’t really think it was gonna go any bigger than that. It was probably 2017 when I went through a big break-up and I was almost using the goal of making the music bigger to cope with life stuff. That’s kind of when I was seeking bandmates to make the sound fuller and trying to find anyone to help me record. Sometimes grief just sends you in a direction.”

Beach Bunny’s Emotional Creature is out on July 22 through Mom + Pop.