“I want the world to hear a more personal side of me”: Christone ‘Kingfish’ Ingram bares his soul on new album, 662

A musical prodigy from his early teens, the 22-year-old guitarist has become a torchbearer for the blues. He tells us how he’s “stepping out of the box” on his second album.

When someone of the stature of Buddy Guy starts telling anyone who will listen that you are “the next explosion of the blues” then it’s safe to assume you are doing something right. Such is the case with Christone ‘Kingfish’ Ingram, the prodigious guitarist from the town of Clarksdale, Mississippi, who emerged onto the scene in 2019 at the age of 20 and became a contemporary torchbearer for Delta and Chicago blues.

Few blues musicians have created quite such as stir in recent years as Ingram. He was 20 when he released his debut album Kingfish but was already attracting a strong following in his mid-teens. By the age of 18, he had already toured the US and six other countries, and performed at the White House for Michelle Obama. His guitar phrasings are primal and astonishingly soulful for someone so young, while his vocal style draws on a deep Delta Blues style.

As the US steadily emerges from the ravages of the pandemic, Ingram is returning to what he does best: wowing audiences in a live setting. Guitar.com caught up with him en route to a gig in Atlanta. He is back out on the road to promote his much anticipated second album 662 co-written and recorded in the midst of the pandemic and due for release on 23 July. It’s a strident, contemporary-sounding release, on which Ingram exercises his adventurous creative spirit, and the latest instalment in an already rich and illustrious career.

Christone was born on 19 January 1999, in Clarksdale Mississippi, and was immersed in music from an early age. His extended family sang and performed in the local church and his mother, Princess Pride, was the first cousin of country singer Charley Pride. For critics and fans, Ingram’s appeal is heightened by an alluring backstory. He was born close to where his hero Muddy Waters lived and worked on a farm, and his birthplace was just 10 miles from the near-mythical ‘crossroads’, the intersection of Highways 49 (‘The Blues Highway’) and 61, where legend has it that Delta blues icon Robert Johnson traded his soul with the devil for musical success.

Ingram became drawn to the blues at the age of five, when his father Christopher showed him a PBS documentary about Muddy Waters. He was hooked. At the age of six he was learning drums, switching to bass at the age of 11 and then guitar. He listened to and learned from Robert Johnson, Lightnin’ Hopkins, BB King, Muddy Waters, Jimi Hendrix and Prince. An early visit to the Delta Blues Museum in Clarksdale proved pivotal. There, he was taught to play at the museum’s arts and education programme. He also attended workshops at Clarksdale’s Pinetop Perkins Foundation. 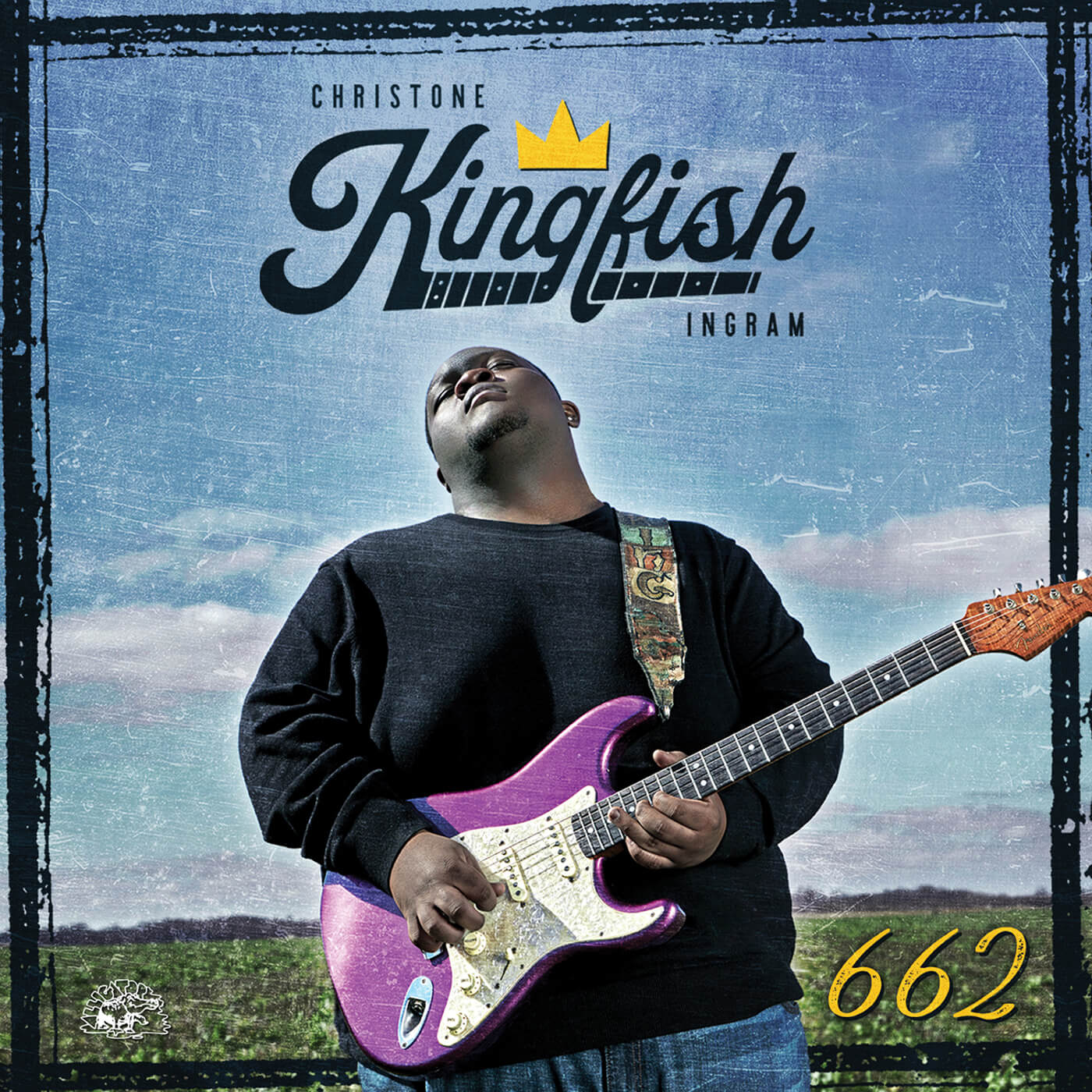 Two years on from his debut album, Ingram emerges from the restrictions of the pandemic with new album, 662, under his belt. It’s a bold statement, demonstrating an evolution of style that embraces a much broader sonic palette, while retaining the raw blues with which he has made his mark. This is borne out on the track Rock & Roll, written by Nashville songwriters Ashley Ray and Sean McConnell, one of three standalone singles, released by Ingram in the last year. It’s a gentle, deeply poignant song about his mother, Princess Latrell Pride, who died in December 2019. There’s a genre-spanning breadth to the track, which suggests a broader market should he ever wish to move beyond the electric blues for which he’s known.

“Ashley Ray and Sean McConnell came to us with the song shortly after she had passed,” explains Ingram. “We dug it and yeah man, everyone liked it as well. We could step outside the box but we could add bluesy guitar riffs to it, and it will still be the blues in a way.”

It’s an ethos evident on the new album 662, named after the telephone area code for Ingram’s northern Mississippi home, which first came into use the same year he was born. “Yeah, we went pretty much outside the box,” he explains, “we did a few experimental things.”

By and large, the album remains anchored in the blues, yet subtle production touches bring an immediacy, edginess and more contemporary feel to this album. Tight compression on the bass and strident, punchy riffs help elevate a track such as Not Gonna Lie,

The rhythm section is flawless and, as ever, Ingram’s playing is as emotive as it is searing. Space abounds within the mixes, with producer Hambridge exhibiting impressive restraint throughout. Ingram’s guitar tones meanwhile, span from the creamy echo-drenched bliss of Another Life Goes By to the scorching, dirt-soaked lead attack of Your Time Is Gonna Come.

Playing in the pocket

Lyrically, the album is, perhaps inevitably, informed by the emotional weight of the past year. “With 662, I want the world to hear and meet a different, more personal side of me,” explains Ingram. “662 is a direct reflection of my growth as a musician, a songwriter, a bandleader, and as a young man. This album was written during the pandemic, shortly after I returned home from a whirlwind year and a half of touring and promoting Kingfish. It was an incredible time of change and growth, moments both good and bad, and I am a better and stronger person for it.”

Ingram recognises the benefits of having played drums and then bass before finally settling on guitar. The rhythmic benefits in terms of groove and feel were invaluable he says. “Oh it most definitely helped because bass and drums are the foundation,” he says. “Once you go to another instrument it gives you a good feel you know. Even when you’re playing rhythm guitar you’re still having to play in a pocket, in terms of technique. So I think bass and drums set me up for that.”

A shift to single coils

The last two years has seen a shift in Ingram’s guitars of choice as he incorporates the potential of single coil instruments into his set-up. Ingram has become synonymous with the custom-built Mike Chertoff Les Paul that has been a staple of his live and studio work. But he has become increasingly drawn to Strats and Teles.

“I’m trying to do something different, to get some different sounds,” he says. “Chertoff has got that humbucker sound that I’ve always been into – like Otis Rush, BB King, Freddie King and Albert King. So I always feel that will be my main sound for a long time but right now, you know, I’m experimenting with the Fenders and trying to do something out of the box. The Strat I mainly use is the Custom Shop model that was built by one of their Master Builders. I’ve had that going on two years now. I’ve become very used to it and it’s become a nice part of my new sound. I’m kind of alternating between that and the humbucker of the Chertoff.”

When it comes to choice of amps, Ingram has always favoured Peavey. His first amp was a Peavey, bought for him by his father from a pawn shop and the fact they are manufactured in Mississippi has a particular resonance for him. “It has a sound that when I hear it, makes me think of Mississippi,” he told us back in 2019. “It’s a very warm tone. I like a very clean tone and I use my pedals for dirty.”

Two years on though, his tastes have changed. “As far as amps, I’m still liking the Peavey but I use a Fender Twin mostly now,” he says. “I like a very clean tone, and I use my pedals for the dirty.” Ingram does not use many pedals but they are an ongoing source of interest.  “I’m always looking a different new pedals and stuff, that have different distortions and tones that I’m into. I use a Mini Cry Baby Wah with a Way Huge Conspiracy Theory pedal.”

As Ingram and his band take to the road to promote new album 662, he is already focused on songs for the third album and other future projects. One such endeavour is a musical project that will blend blues and hip-hop. He is reluctant to reveal exact details at present but says he and his team are actively planning the project.

Ingram is acutely aware that very few young people like him will be interested in listening to the blues in the 21st century. He has described himself as an “old soul” who doesn’t think like someone in their early twenties, but rather prefers to spend time with older people and get wisdom and knowledge, and learn from them. He doesn’t go out clubbing unless he is actually playing in the club, he said. As such, he has a different mindset to most 22-year-olds.

It’s all a stark contrast to the hip-hop his friends were engaging with at the time. “They really thought it was funny, cause it was like ‘Man, you young but you listen to that old, sad stuff’,” he told Marc Vitali of WTTV in July 2019. “I’m like, ‘Man, I ain’t really like that, I’m listening more for a culture thing, you know? This is history. This birthed what you guys listen to today, because you know rap is nothing but the blues’ grandchild’.”

Ingram is convinced that there is a natural connection between the two genres, and mutual benefits to be had from melding the two.