From raising funds to have a sign-language interpreter at their shows to a YouTube series dedicated to reviewing chips, London punks Dream Nails are making a name for themselves on and off the stage

The past five years have been anything but a nightmare for Dream Nails. Singer Janey Starling and guitarist Anya Pearson founded the band in 2015 based on a shared commitment to feminist activism – ideals that are palpable in both their music and their on-stage demeanour. Self-described as “witch punk”, their modernisation of the riot grrrl movement has garnered them much attention, and the act already have performances on Glastonbury’s Sisterhood stage – the only all-female venue at the festival – and a tour with Anti-Flag under their belts.

Now on the cusp of releasing their self-titled debut album, we speak to Pearson, who tells us how it all began, from the Ukulele Orchestra of Great Britain to reviewing chips with a punk legend

What drew you to playing guitar?

“I grew up listening to my mum play the guitar. She was in the Stepney Sisters, one of the UK’s first feminist rock bands, in the 1970s, and was one of the original members of the Ukulele Orchestra of Great Britain. I remember the sound of her all-women improv jazz band radiating from our basement when I was a kid. She was a big inspiration. She taught me how to play guitar and encouraged me to start my own band.” 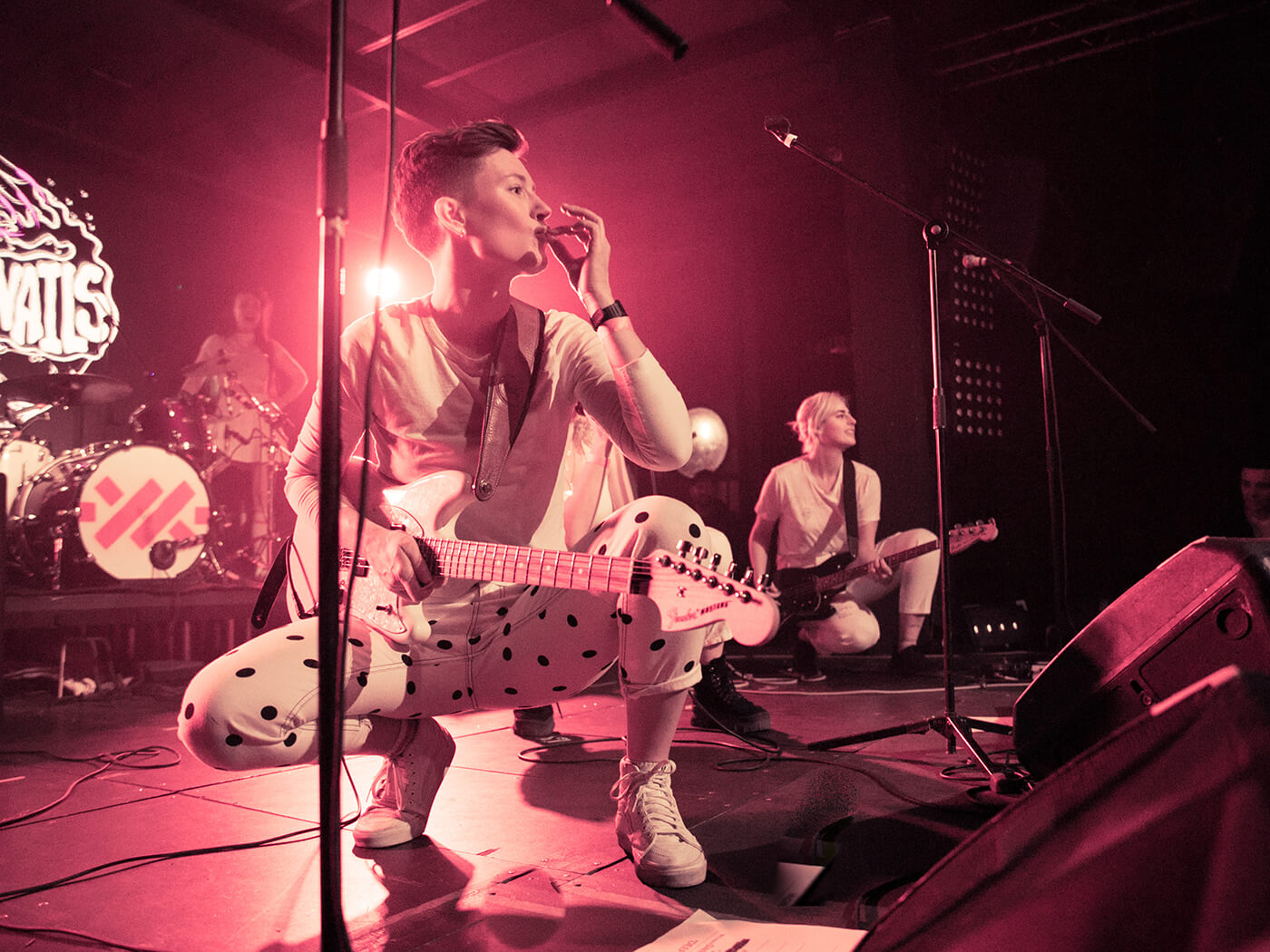 Your debut album tackles societal injustices, especially from a queer feminist perspective. What artists have helped push your music in this direction?

“Dream Nails are forever indebted to our punk foremothers, The Slits and Bikini Kill, but today’s feminist punk is intersectional. We are inspired by the intersectional feminist activist movement, which is trans-inclusive and takes into account race, sexuality, class, gender, disability and so on. Exciting bands such as Big Joanie and Petrol Girls are pushing the boundaries of what it means to be a feminist musician today.”

Your live shows are riotous, vibrant and fun, but also inclusive. Is that a difficult balancing act?

“Inclusivity is important to us. We make sure venue toilets are gender-neutral, we’re crowdfunding for a British Sign Language interpreter to be at our London launch show, and we have taken responsibility for getting some venue staff trained by Good Night Out [a charity campaigning for safer nightlife spaces to prevent sexual harassment and assault].

“But we think those things should be standard. A shocking number of women get groped at gigs. What’s the point of playing feminist music in that kind of space? We always ask for women and non-binary people to come to the front of our shows, and we’ll stop a show in the middle if we’re not satisfied. We think that’s what makes our shows so riotous and fun – women and non-binary people actually feel free to dance and rage and sing with us.”

Tell us more about your main guitars and amplifiers.

“I play a Fender Mustang 90, which has MP-90 pickups for a bit more grit. When playing live, I always have a Boss Blues Driver on, and play around with Boss delay and Electro-Harmonix Cathedral pedal for reverb and space. I love my octave pedal for those heavier riff moments. I’ve just bought an Orange Dual Terror amp, which I’m excited to take on our album tour in April.” 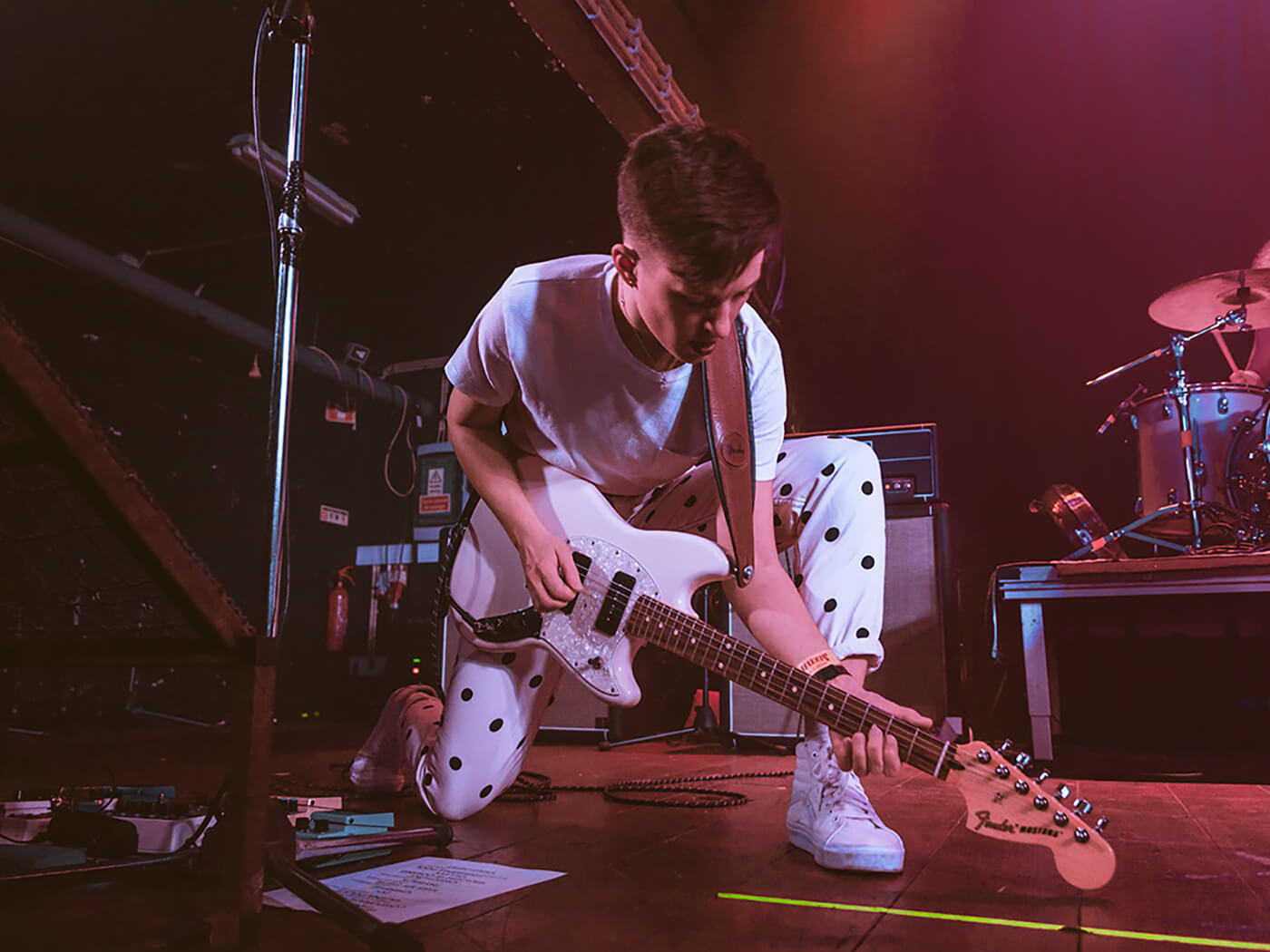 Your guitar work on this album is direct and fuzzy but cleverly counterpoints the vocals. What were your main influences during the recording process?

“Our producer, Tarek Musa from Spring King, tried to capture the poppy, fuzzy energy of surf-punk bands such as Fidlar during recording. When writing Jillian and Swimming Pool, I was inspired by Rachel Aggs’ [Sacred Paws] ability to transpose highlife-style guitar hooks to a rockier sound. And I love Marissa Paternoster’s [Screaming Females] way of combining heavy riffs and guitar harmonies. In the studio, I took the opportunity to multi-track my parts as often as I could, for more harmonic depth, as in our tune People are Like Cities. Tom Morello is a big influence for chunkier riffs. Kiss My Fist and Payback are feminist takes on Rage Against The Machine. Tom’s been a big supporter of our band – I had a fun geek-out with him about gear at his London show last summer.”

Does getting praise from respected radio stations and music magazines impact the band?

“It’s been so fun. We’ve had love from Jack Saunders and Abbie McCarthy at Radio 1, Steve Lamacq and Tom Robinson over on BBC Radio 6 Music, and John Kennedy on Radio X. The Guardian even made our single Text Me Back – a wailing homage to being ghosted by your crush – their track of the week. It’s helped us gain new fans, and hopefully assisted a few of them in getting over the humiliation of romantic rejection too.” 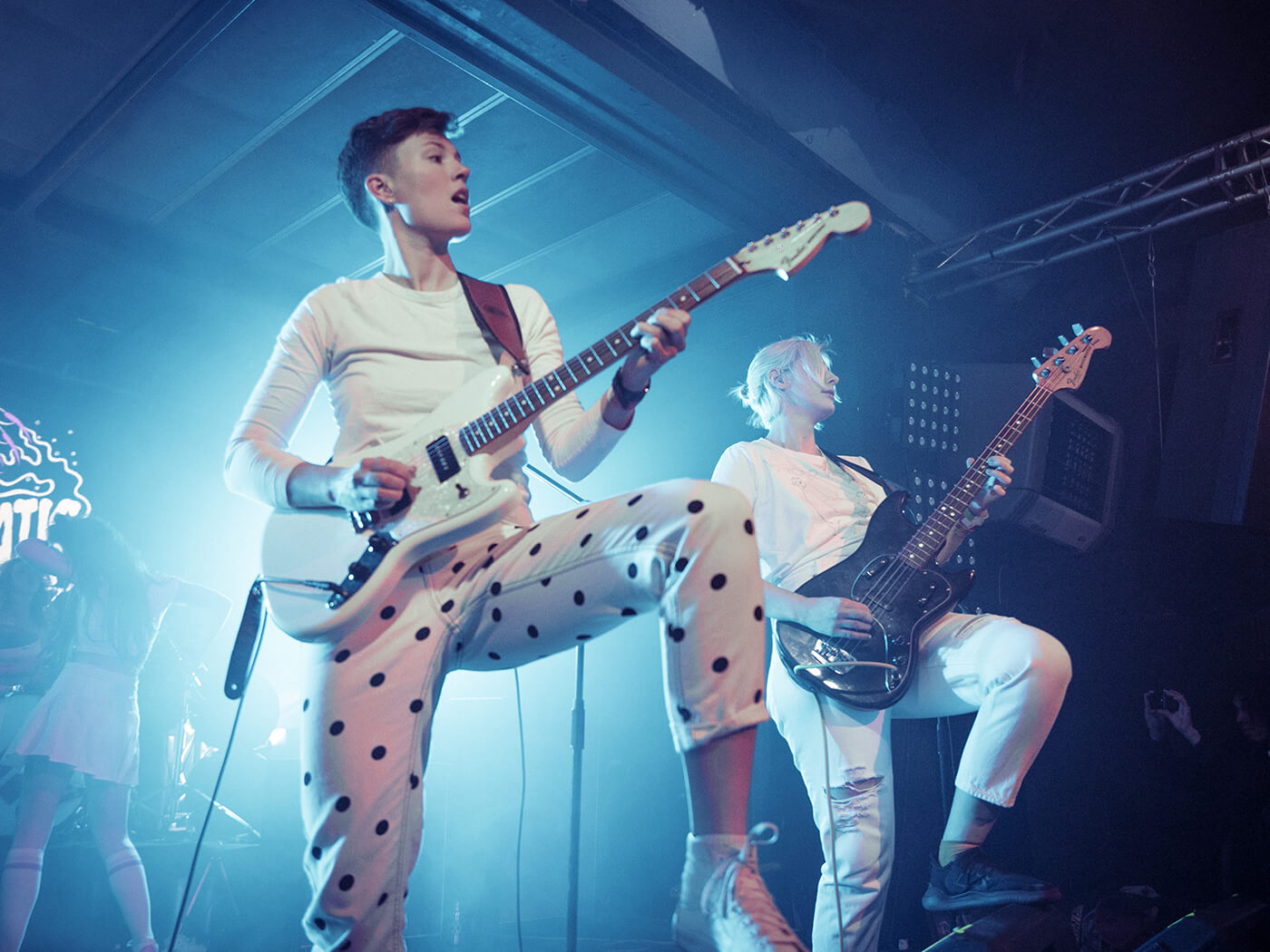 You recently supported Anti-Flag on tour. How was that?

“It was awesome. We joined Anti-Flag and the Homeless Gospel Choir for a leg of their European tour, playing in Lisbon, Barcelona, Madrid, Milan and a few other spots. It was such an honour to open for a band we loved as teenagers – and we’ve rarely made faster friends. We even roped in Justin Sane, their lead singer, for a guest spot on our YouTube series Chip Advisor. We review chips from around the world. Justin’s from Pittsburg, home of Heinz tomato ketchup, so his culinary expertise is outstanding.”

What does the future hold for Dream Nails?

“We’re releasing our self-titled debut album on 3 April with Alcopop! Records, and embarking on a UK tour in April, with a raft of festivals throughout the summer. Come and see us play. We are also releasing Kiss My Fist on the one-year anniversary of that queer couple getting beaten up on a London bus for refusing to kiss for the entertainment of men. It’s an empowering banger dedicated to every queer person just trying to get from A to B without getting beaten up.”

Dream Nails’ debut album is out 3 April on Alcopop! Records.