A long-standing staple of the Welsh prog-metal scene, Godsticks has released a fifth album that sees the band include more melodic licks and vocal hooks, and a less-is-more approach to guitars. 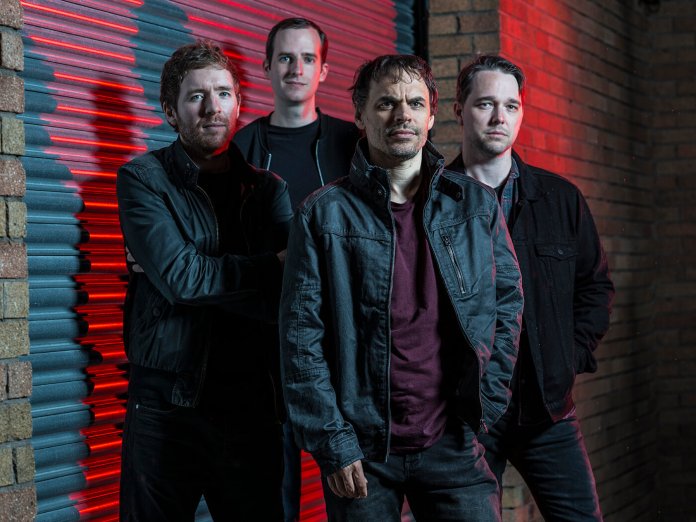 Recorded at Monnow Valley Studios, Godsticks fifth LP, Inescapable, sees the band rekindle their relationship with producer James Loughrey – famed for his work with Skindred – and lean into the themes that usually convey a concept album. The band maintain that this isn’t a concept record, but there is an air of personality and intimacy that we haven’t heard from Godsticks before. Darran Charles’s vocal capabilities have developed exponentially, and that’s due in part to their fruitful relationship with the Kscope imprint, on which this album is released.

Despite their progressive roots, with legato runs, hybrid picking and tapping aplenty on this album, both Charles and Gavin Bushell have aimed to approach their lead work with a “less is more” attitude this time around. When writing, the aim from the beginning was to constantly ask: ‘Would this song stand on its own, even if it was just guitar and vocals?’. So, we ended up stripping back a lot of these songs to their bare bones as one way of ensuring we have a strong melody and great accompaniment” Charles reveals.

Gavin Bushell again pushes his own boundary lines on this album, utilising both the obvious, an Axe-FX, and more left-field instruments, such as a Heritage 535. Combining both, he manages to develop new and signature sounds throughout, even convincingly making his six-string melodies sound like a piano on Surrender and Victim.

Below, he dissects his favourite guitar parts on Inescapable.

“We wanted to keep the overdubs to a minimum on this album and this song is the best example of that. We wanted it to sound raw and hard-hitting and I think it does just that. For the solo I wanted it to have a little element of fun while still maintaining the serious nature of the song. I used a combination of hybrid picking, tapping and legato runs. The last thing I wanted was to create a musical technique thesaurus in audio form by playing up and down a scale at a billion bpm, purely because that just doesn’t interest me at all. I’ve always believed that a solo should be musical, and I was really happy with how it came out!”

“I love the main riff in this song! It reminds me of some of the early 90s grunge bands, plus you have one bar of 4/4, one bar of 5/4 and it really grooves. As this track progresses, we introduced some classic prog metal.”

“The main part of this song is in 7/4 and it was a real challenge to get it to sound right. I’ve always felt that when it comes to playing odd time signatures, the real challenge is making it groove and sound natural. I used a Heritage 535 guitar for this track going through an Axe-FX, and I really loved the way the overdubbed guitars came chiming through. You could easily mistake them for keyboards, but they are definitely guitars.”

“This was originally written on a Fender Tele baritone guitar with the B string tuned down to A. It was also written as two separate songs, Reap and Sow. The main guitar part for Reap was performed using tap harmonics. I used an eight-string Strandberg guitar for the final recording. It was important not to have too much gain so you can hear those harmonics chiming through. After we soaked the guitars in reverb it gave it that big and dreamy sound.”

“This is another track where the intro guitars have a very ‘keyboard’ sound. The guitar melody that I wrote for the bridge section was based on the existing vocal melody and I just added some extra sauce. I also took some inspiration from the classic prog bands and added a flanged guitar to emphasise the last note. The guitar solo was performed by Darran and it is wonderful! It’s really melodic and beautifully performed.”

Godsticks new album, Inescapable, is out now on Kscope.