​“Just being a band, fighting all the obstacles. That’s already a win”: Hinds’ Ana Perrotte on being a woman in music

The Spanish garage rockers’ lead guitarist on Jazzmasters, bass distortion, the band’s enduring love of nylon-string guitar, and why they’re tackling the patriarchy one song at a time on new album The Prettiest Curse.

For Hinds, 2020 has been a year of persistence. Their third album ready to go when, like so many other records that were due at the height of the pandemic, it was inevitably delayed. The eventual release of The Prettiest Curse marked the Spanish band’s most diverse entry into their portfolio so far but is also a startling example of their evolving musicianship, with singer and guitarist Ana Perotte admitting that they learnt guitar “pretty late” compared to most people.

With Ana and Carlotta Cosials originally releasing Hinds’ (then called Deers) first singles on Bandcamp, they soon became a four with the additions of Ade Martin on bass and Amber Grimbergen on drums. Quickly they became recognised for an unkempt style of garage rock, singing, shouting, yelping in broken English and wielding their instruments as if they were mighty weapons of war. Their live shows are built on a simple but effective foundation of fun, furore and community.

What Hinds offer is an invitation, regardless of whether you are at a show or in the comfort of home. Cultivating a sense of belonging to an exclusive club. It is all too easy to tap into the freedom of expression that Hinds offer. “We’ve spent a lot of years on the other side of the industry, just going to shows and that,” Ana explains. “We know exactly the kind of show we like when we are in the audience, it happens to be the same one that we like to perform. I don’t think I’m cooler than the people in the audience, I just have the mic, so I’d rather invite everyone else to feel the same way”.

The bond that they have grown with their fans over the years has created a unique feeling. “For like one or two hours when you really connect and the whole place is on the same page it’s something so strong and no one outside will ever understand it and you will never repeat that”.

Speaking of clubs, Hinds linked up with Japanese rock-band Chai on the recently released single, United Girls Rock ’N’ Roll Club. A collaboration that was born out of the friendship and similarities between the two groups, “It was like seeing ourselves in a Japanese mirror, it was crazy,” Ana exclaims. “Like, they’re four girls, they’re young too, a lot of fun on stage and they’re very weird – in a good way!”

Not only did a likeness exist in their music but within the music cultures in their respective home countries too. “I feel like we both come from countries where it’s not really normal to break through internationally. There’s not a lot of bands that do that where we’re from, especially being women”. In response to this, United Girls Rock ’N’ Roll Club is a celebration of two bands who have broken through the independent scenes of their own countries within a male-dominated genre and enjoyed worldwide success. As Ana says, “I think it’s impossible to listen to that song and not smile”.

With the new album touching on defying patriarchal ideas and bluntly mocking sexist comments, over the course of their career it has become more important to call out bullshit within the industry. “I think by just being a band and trying to make it and working hard, fighting all the obstacles. I think that’s already a statement, that’s already a win because a lot of girls are seeing us perform”. 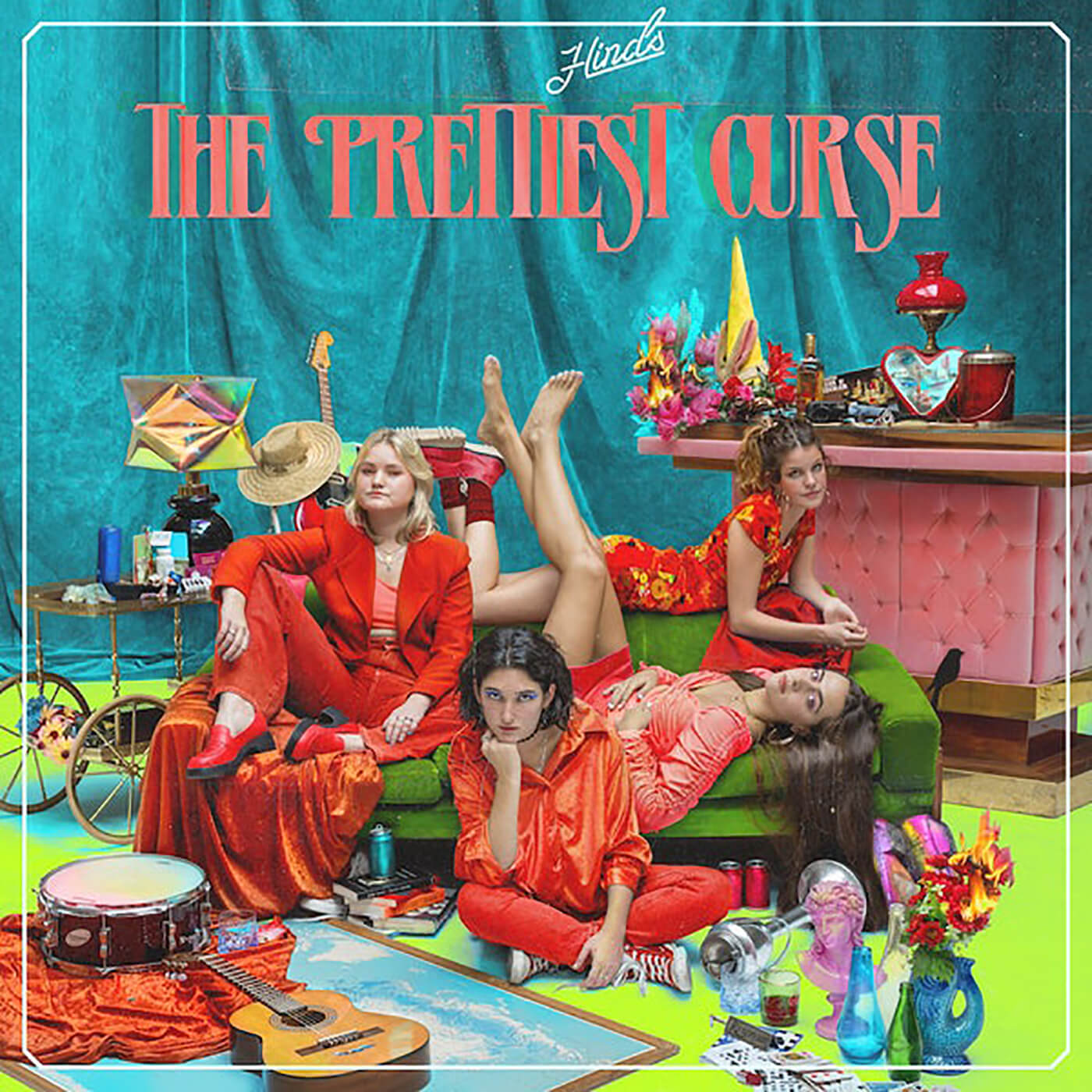 A quick scroll down Ana’s Instagram page and you’ll see her posed with her prized Fender Jazzmaster, surprisingly for a pro musician, it’s only the third guitar that she has owned herself – the first being band member Carlotta’s brother’s old guitar which was, “a shitty thing that you buy at a mall for you kid at Christmas”.  She quickly moved onto her first guitar purchase, which turned out to be a particularly esoteric one –  an old Epiphone-branded S-type with two oversized single-coils and a floating tremolo unit. But despite spending her fair share of time with the Epiphone, the Jazzmaster has connected with Ana in an entirely different way.

“When I got this Fender I realised, wow it moves with me! I think it’s a physical thing, it’s the perfect weight” Ana exclaims in clear admiration. Not only has it become a better companion, but it has also helped to guide Hinds’ lead guitarists down very different paths. “A lot of our friends I see, they are really happy. They are like, ‘Wow each guitarist has a very strong personality and you’re not trying to be the same’. Maybe we were doing before but now we have found our own personality”.

The earliest iteration of Hinds involved just Carlotta and Ana, who first went about learning to play guitar after being surrounded by friends and boyfriends who were already in bands. During a trip away together, Carlotta happened to bring her brother’s guitar and they went from there with Ana explaining that she only knew “how to play three chords” at the time but as we all know, that’s all you need to start a band.

In terms of guitarists who influenced Ana, she turns to a more recent example of seeing HAIM perform a set at Primavera Sound and specifically the guitar work of Danielle Haim. “I was so used to seeing men playing guitars and instruments that it just didn’t impress me. I remember (being) really impressed to see a woman playing like that. It’s one of the strongest things, I was like ‘Wow! I wanna do that!’ I really respected that”.

Introducing synth into the mix, for their third effort Hinds also infused pop melodies into their creative process, adding bolder strokes of colour to their sound but still retaining the ferocious and energetic outpours that make Hinds such an interesting and sometimes cathartic phenomenon. In changing approach, it was out with the old and a part of her setup that had frustrated Ana, who her regular dirt pedal for the low-end thump of a Boss bass distortion, “It’s a big pedal and it’s something stupid but it really, really fits my guitar”.

It is a far cry from their earlier guitar work, with Ana describing a reliance on reverb. “When we started, we had almost no bass, it was very trebly, high pitched and a lot of reverb too. I feel like it would hide our early mistakes”. Working with producer Jennifer Decilveo, she helped guide the band in this new direction whilst giving them some new tricks.

“I think it would have been very different without Jen, if we’d had a different producer because she really saw us and saw the best part of us. It was cool to know that we can just jam and do crazy things, she would find whatever sounded good and use the instrument differently, literally however you want it”.

‘The Prettiest Curse’ was the first album where Hinds didn’t have an overt reference point to draw on, with their two previous albums being inspired by North American bands or punk bands such as The Clash. Their third album gave them an opportunity to change their approach. “We wanted to invest more in the production, have a deeper more rounded sound with more layers. We didn’t really have a clear reference, which in the end made it a lot more fun and a lot more free. I think that’s why it’s such a rich album in that it has Spanish ballads like Come Back and Love Me and then a classic Hinds song like Burn or a new song like Just Like Kids”.

Whilst predominantly singing in English, Hinds have also integrated Spanish into their songs on occasion, as well as using Spanish guitars throughout their discography. Whereas the guitar has a more counter cultural history in anglophonic countries, the instrument that we know today took its shape within Spain. When asked whether Spain still appreciates the guitar in a different way, Ana cannot be too sure, the only thing she can be certain of is their own appreciation for the instrument.

“Nylon Spanish guitars have always been very important for us. In the first album all of the songs had Spanish guitar in the background, and I feel that was the glue through all of the sound”. Ana makes special mention of their recent track Come Back and Love Me, which for her exemplifies some of the instrument’s best qualities. “This song is just so romantic and so classical in that sense. I really like the option of having it (Spanish guitar) in the back because that really reminds me of the warmth of Spain”.

With their music crossing borders, not only do the rest of the world gain an insight into the world of Hinds but they are taking Spanish culture with them in their lyrics, instrumentals and attitude. “I think being Spanish really influences the attitude of the band and in our case the attitude is very important in the music too. I don’t think Hinds would exist if we weren’t from Spain, after every show there’s someone talking in Spanish saying, ‘I’m learning Spanish this is what I’ve learnt!’”

The Prettiest Curse is out now.