Jesse Wood on the £100 Les Paul he found on eBay and Reef’s new LP, Shoot Me Your Ace

The guitarist discusses his unlikely partnership with Duran Duran’s Andy Taylor and cutting everything live like the old days.

“It’s like four or five guitarists with him!” Jesse Wood enthuses, when discussing working with Duran Duran’s Andy Taylor on Reef’s colossal new album, Shoot Me Your Ace.

While it might seem like an unlikely union on the face of it, Wood immediately struck up a strong musical relationship with Taylor, and the partnership was cemented thanks to an impromptu performance at Glastonbury 2019. “We’d had a little jam or two and were sparking quite well on the guitars. We invited him to play with us at Glastonbury and played Stay With Me, my dad’s old song, and it sort of snowballed from there.”

Indeed, the energy and pomp that his father, Ronnie Wood, has carried throughout his career in the Faces and The Rolling Stones respectively is evident on the band’s sixth record. Written quickly after their performance alongside Taylor at Worthy Farm, Jesse Wood and co chose to decamp to Baltic Studios in North London, with the intent of recording four songs over the course of a weekend in early 2020. “It was a cool little studio by the canals, we had loads ready to go but thought let’s just concentrate on four,” he explains. “We ended up doing six songs a day! It took us two days to record them. We cut them all live in just a few takes. It was like the old days.”

The band’s prolific nature in the studio came to be a blessing in disguise. With most of the recording completed by March 2020, the pandemic struck, and the minimal overdubs needed ensured that the band were left with a complete body of work, despite having to wait two years to release it. “We’ve been sat on the songs for a long time, so we’re very excited.” Wood admits. “It’s been nice to release the whole album, turn it up loud and see how it makes everyone feel.”

Thanks to the aforementioned performances in the studio, Wood had little time to mess with his guitar rig, opting for his beloved 2009 double cut Les Paul – which he found on eBay for £100 – and a pair of Epiphone Wilshires. His pedalboard is streamlined too, using mostly an Analog Man King Of Tone into a Marshall JCM800, which he swaps out for Hiwatts in a live capacity. Below, he talks us through the recording process and his five favourite guitar parts on Shoot Me Your Ace. 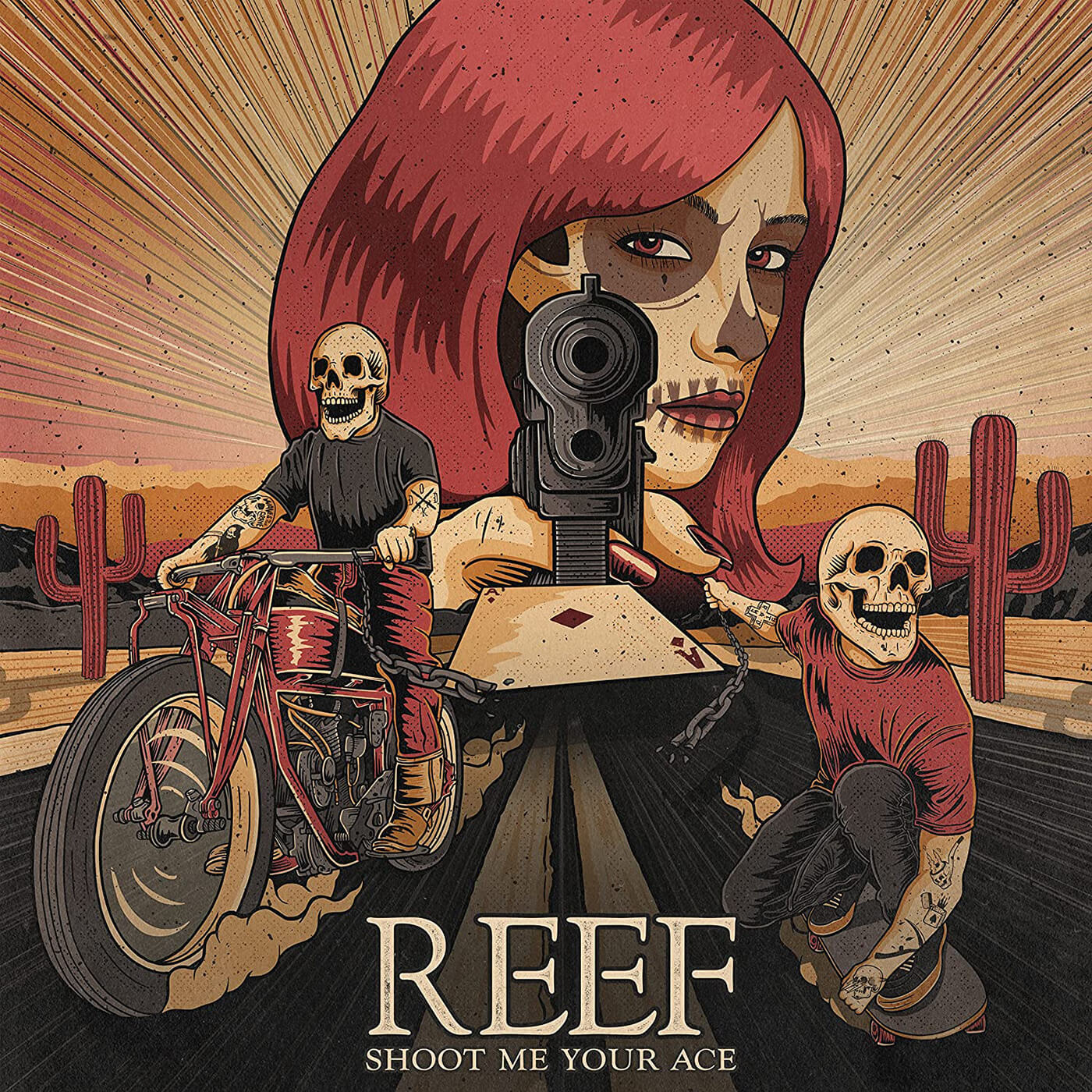 “We mixed it up between all of us with riffs and bass lines. We all had quite predominant starts to songs that the rest of the band would then take on and develop into a whole song. Jack [Bessant, bass player] wrote a song called Right On, just turned up with it. I remember being in his little barn in Cheddar and he played it to me and Gary, and I was like, ‘That doesn’t need anything else!’ That was beautiful. Andy and I came up with a lot of different parts. We sometimes played each other’s parts as well, you kind of integrate. I used a Les Paul 2009 Reissue double cutaway with P-90s that I found on eBay, it’s a lovely lump of wood. It cost me 100 quid! I paired that with a Marshall JCM anniversary model and a King of Tone by Analog Man that my tech got. I like that there are two settings and I can use both for extra boost.”

“We may or may not release this when there’s a horrible war going on. But it was written a long time ago and with the riff I tried to keep it sort of like Reef, it’s quite classic rock. I was thinking of like bands like Free and the Place Your Hands riff and thinking of big open chords for choruses. Gary came in with the catchy chorus and we all made it as one. I use the same setup as I just said, maybe a bit more crunchy. I did an overdub with a white Epiphone Wilshire reissue from 2009, it’s really beautiful guitar. That was through a smaller JCM that I got directly from Marshall, with just a single speaker. I played that solo in the Strongroom in Shoreditch. I’m okay at improvising, but I’m more of a structured solo type of guy. I really enjoy telling a story with a solo. As George Drakoulias taught me all those years ago, ‘tell a story, man, tell a story!’ That will live with me forever.”

Shoot Me Your Ace

“I use that same Epiphone in this video because it looks good with my t-shirt, and it looked good with all the motorbikes swinging. That was a vanity thing, but that’s part of guitars as well isn’t it! With Shoot Me Your Ace, that’s a song that just came out in the room. We’d been jamming it and there were a couple of different ideas that sounded quite similar. I’d always get confused with the rhythms when we were writing them, but this popped out as Gary came up with the title and I came up with a simple riff on top. That’s the magic of bands, you can collectively do that kind of stuff and push each other. Gary [Stringer, singer] will come up with a thing, Jack would come up with a brilliant middle eight or whatever. You can’t explain it. It just happens. That ended up being the title of the album, it’s sort of asking ‘show me what you got!’ And that’s exactly what we’re doing.”

“I’m using the same setup again, the double cutaway Les Paul and two Wilshires. I have a lovely maroon one alongside the white model. This happened in the room as well with Andy taking the lead, but really it took care of itself. What a start to a song, y’know? This track is Andy-tastic Taylor. He turned up and played and we all immediately said, ‘that’s it!’”

When Can I See You Again

“I was thinking of The Who and Pete Townsend here because I’ve grown up with those people. Big chords, lots of space, very simple but building a bit of momentum. I’d been coming up with this idea for a couple of years before we did this. It came out when I was on holiday in Ibiza, I’ve still got the recording on my phone. I really enjoyed the moment where everybody took that song on because I was a bit nervous about showing it. Maybe I didn’t think it was strong enough for the album. I always have Kenwyn and Dom in mind, even though they’re no longer in the band. The blueprint of the band has always got that groove and space, which I always loved because I’m a fan of the band. If you join a band then you’ve always got to step back and go, ‘how can I write this to make it a Reef song?’ Lucky enough the chemistry between me, Jack and Gary has been great because my intent and my respect has come through. I’m really happy about that.”

Shoot Me Your Ace is out now on Raging Sea Records.

“Stop bullshittin’”, FFDP’s Chris Kael tells artists who threaten to leave the US

Derek Trucks recalls Gregg Allman’s funeral: “The way people came out to watch the car drive by – you see that for Muhammed Ali...