Recording with iPhones and getting “too weird” – Jimmy Eat World on new album, Surviving

Jim Adkins and Tom Linton on how the emo veterans took a DIY approach to push themselves making their new album. 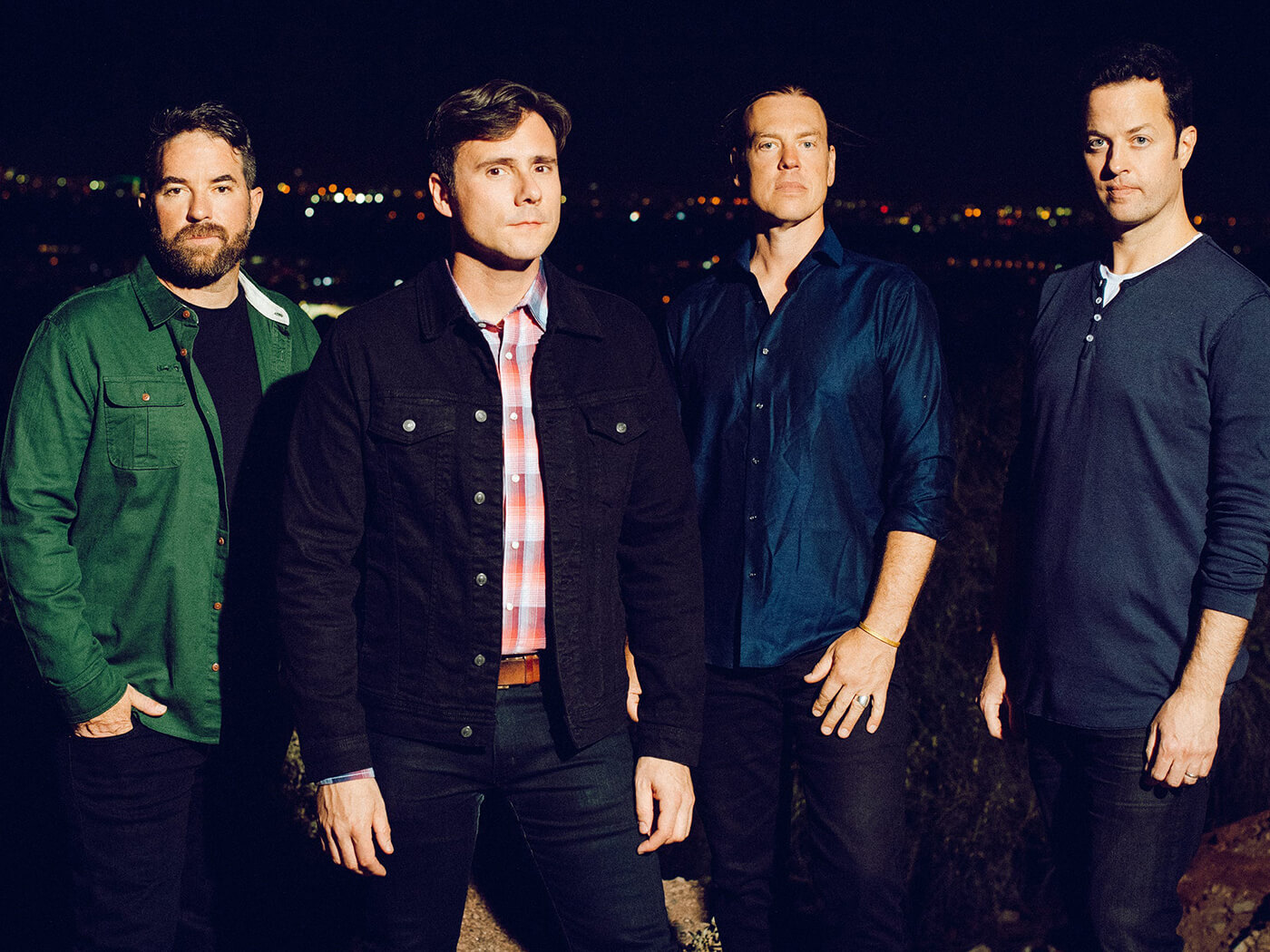 You’ve seen this pitcher on plenty of occasions. You know their wind up, and how they always hope to overwhelm you with speed. Their shoulder snaps as they release the ball; you choke up on the handle of the bat and swing. You miss by a mile as a curveball sinks into the catcher’s mitt. After all this time, you simply weren’t expecting it.

Jimmy Eat World have been a band for 26 years and they’ve spent most of them playing clever, emotionally resonant indie-rock songs that are just scruffy enough. Their three-album run spanning the turn of the millennium – Clarity, Bleed American and Futures – represent a cherished set of blueprints.

True to form, on their excellent new LP, Surviving, they set about playing clever, emotionally resonant indie-rock songs that are just scruffy enough. That is, until 555 lands, a quarter of the way through the running order. Dotted with 808 snaps, synth bass and multi-tracked, R&B-adjacent vocal phrasing, it’s a killer curveball. But, thanks to frontman Jim Adkins’ impassioned performance and some perfectly-timed, chiming guitar overdubs, it resolutely rings true as a Jimmy Eat World song.

“Damn it!” Adkins laughs during an early morning catch-up at the London headquarters of the band’s label. “I was hoping people would say: ‘Fuck, what did I just hear?’ I was hoping it was too weird. If there’s not a bit of trepidation, then I think you’re not pushing yourself.” From across the room, the band’s SG-toting guitarist Tom Linton adds: “It’s kind of a cliffhanger, a song like 555. It’s like, ‘What are you going to do now?’”

What they did opt to do next, though, will delight the old heads. The following song is vintage Jimmy Eat World, with One Mil exploding from an acoustic riff into a huge chorus to rival the classic Futures single Work. The song’s opening guitar line was recorded straight into Adkins’ iPhone in his garage and then transferred into Pro Tools. “We had to fuck it up because it sounded too good,” he says. “I wanted it to sound shitty. The microphone on those things is most of the cost of the device.”

A fortunate side effect of this realisation was a quick fix involving AFI vocalist Davey Havok, whose backing vocals on the closer, Congratulations, were recorded in the same way. “Davey was wondering how he’s gonna do it, where he’s gonna go for a studio and I’m like, ‘Fuck that, put headphones on with your laptop, record vocals with your phone and send that to me,’” Adkins says. “I dropped it in the song and it was fine. It made me realise how there are kids out there, SoundCloud rappers who’ve never seen an XLR cable, making Platinum records.”

While talking about Surviving, Adkins laughs a lot. There’s plenty of love for the music, plus an approach to recording that utilised their experience as a unit and prioritised what felt right. But the record isn’t a light, fluffy confection by a veteran rock band. Introducing it, Adkins wrote: “I was a passenger in my own body for 36 years and never realised it. I didn’t know it because I was letting a voice inside my head tell me all sorts of lies to continue life at the minimum.

A tipping point arrived for Adkins when he quit drinking several years ago. He had to figure out how he functioned, who he was, without that crutch. “It’s a coping mechanism,” he says. “So what’s at the root of that? Well, it’s you. It’s not the mechanism. It’s you. And how do you fix you? You have to really do some deep-dive shit to fix that, and you don’t really fix that unless you fix everything.”

These themes have been woven throughout Surviving. One Mil’s celebratory hooks, for example, prop up a lacerating look at missed opportunities. The standout Diamond, which slaloms into a chorus that feels transposed from the salad days of early 2000s emo, is a laundry list of improvements to be made, with Adkins interrogating our capacity to ditch anything that doesn’t fix our problems immediately. As he puts it on Love Never: “Do you want the work more than the reward?”

“If you want to change anything about yourself, it’s gonna be a process,” he says. “We fail most of the time because we can’t accept that incremental progress is enough. The truth is, all we have is incremental progress. You’re always working towards something or falling away from something. Say I want to lose weight. I weigh myself and I’m down 0.4 pounds. I should think, ‘Hell, yeah! Progress!’ But I don’t. I’m thinking ‘Fuck, this isn’t working fast enough. I’m just gonna go eat fried chicken.’”

As deliberate and considered as Adkins’ lyrics are, there’s a sense of freedom at play in the arrangements and presentation of Surviving. Tracked at the band’s own Arizona studio with returning co-producer Justin Meldal-Johnsen, its distorted guitars are jagged and punchy, cutting through the more esoteric moments with a rugged flourish. At a time when digital recording allows a band to tweak forever, readily sacrificing something real at the altar of artificial perfection, they’re the result of Jimmy Eat World fighting that urge.

“I think this is probably the least care we’ve taken in getting sounds,” Adkins says. “I just had my Marshall head into my Marshall cabinet that I’ve been making records with since ’96. I turned it up and that’s the sound. And I’m like, ‘Okay, at this point we could try this head with this, we could try these mics with it.’ But, no. It’s good, right? Sounds good. Fuck it. Leave it. That’s the record.”

There are a few additions cribbed from the band’s Axe-Fx live rig – delay trails, the odd weirdo crystallizer effect – but otherwise, things are remarkably straight ahead. Linton played his trusty SG through a well-worn Orange head and Orange cab. “It’s real,” he says. “Even the takes were one or two.”

Guitar-wise, Adkins stuck to his signature JA-90 Telecaster Thinline, the guitar he describes as a union between a Tele and the Les Pauls that served as his go-to guitars for many years. “Fender used to have their headquarters in Scottsdale, Arizona, like a five-minute drive from our studio, and there were Fender people all around town,” he says. “We got to be friends with a couple of people and one of my buddies had this prototype and he wanted me to check out.

“It was a double cutaway, chambered Telecaster with a glue-on neck and P-90s. And I was like, ‘This is pretty cool, but what would be rad is if we had tone volumes for each pickup and maybe put the toggle switch up here…’ He was like, ‘Wait, why don’t we just do a guitar?’ It’s got a Gibson scale neck, Les Paul-style tone volume controls and the toggle switch is up on the horn.”

While Surviving might appear to be Jimmy Eat World at their most economical gear-wise, Adkins and Linton have in fact long favoured setups that get the job done over myriad different configurations. Adkins views working with what you have as an effective prompt and also speaks from experience when it comes to understanding how a person functions creatively.

“The thing about writing is that it doesn’t matter where you look, you’re going to find yourself,” he says. “It’s like when you get a new pedal – you write a song because you’ve got a new gadget. But you’re still you. The choices you’re making are based off preferences that are ingrained from your first musical experience onward.”

He adds: “Restrictions are a great form of inspiration. You say, ‘I’m going to work within these parameters’ and it’s like an abstract version of not starting by looking at a blank page. That’s a great trick for writing or being creative: if you start with the premise that you can do anything, you’re gonna be paralysed.”

Bands that continue to deliver the goods have usually come to the realisation that longevity is about understanding your existing strengths as much as it is a boundless appetite for the next new thing. Surviving underlines that, just as it lays bare Adkins’ path to self-acceptance.

“I think we’ve been good about just being brutally honest with ourselves about what we like and what we think is cool on all of our records,” he says. “And we’ve always felt it’s important to leave doors open – because you never know where you might go next.”

Jimmy Eat World’s Surviving is out on 18 October through RCA.