Maker’s Marks: Beyond the Filter’tron

Though Ray Butts is probably best known for inventing the Filter’Tron, his EchoSonic amplifier had a seismic impact on 1950s pop music, and the innovations didn’t end there. 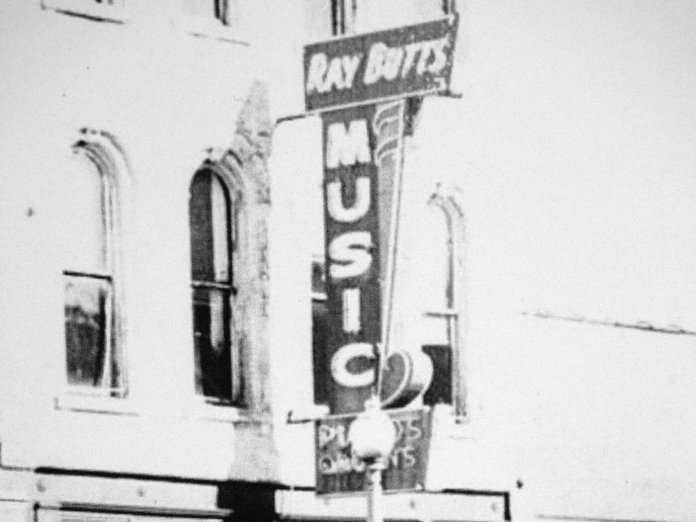 Over the past couple of issues, we’ve seen how the documents and parts in the Ray Butts archive have provided fascinating insights into his career. In addition to inventing the Filter’Tron – possibly the earliest humbucking pickup designed for the electric guitar – Ray could also claim to be the inventor of the first guitar amplifier with a built-in echo effect. Though fewer than 70 units were built, the EchoSonic’s slapback sound would quickly become iconic.

In the early 1950s, Ray was running his music shop with his wife, Ann, in Cairo, Illinois. Local guitarist Bill Gwaltney explained to Ray how he was eager to recreate live the slapback tape-delay sound on Les Paul’s recordings. At the time, those echo effects could only be achieved in the studio, but Ray set about to change that.

At first he experimented with an old Gibson amp and a wire recorder, but by 1953, he’d built the first of his EchoSonic amps, using an onboard tape loop to produce the desired echo effect. It captured the slapback sound perfectly, and while Bill took it out to play gigs, Ray set about making EchoSonic #2. 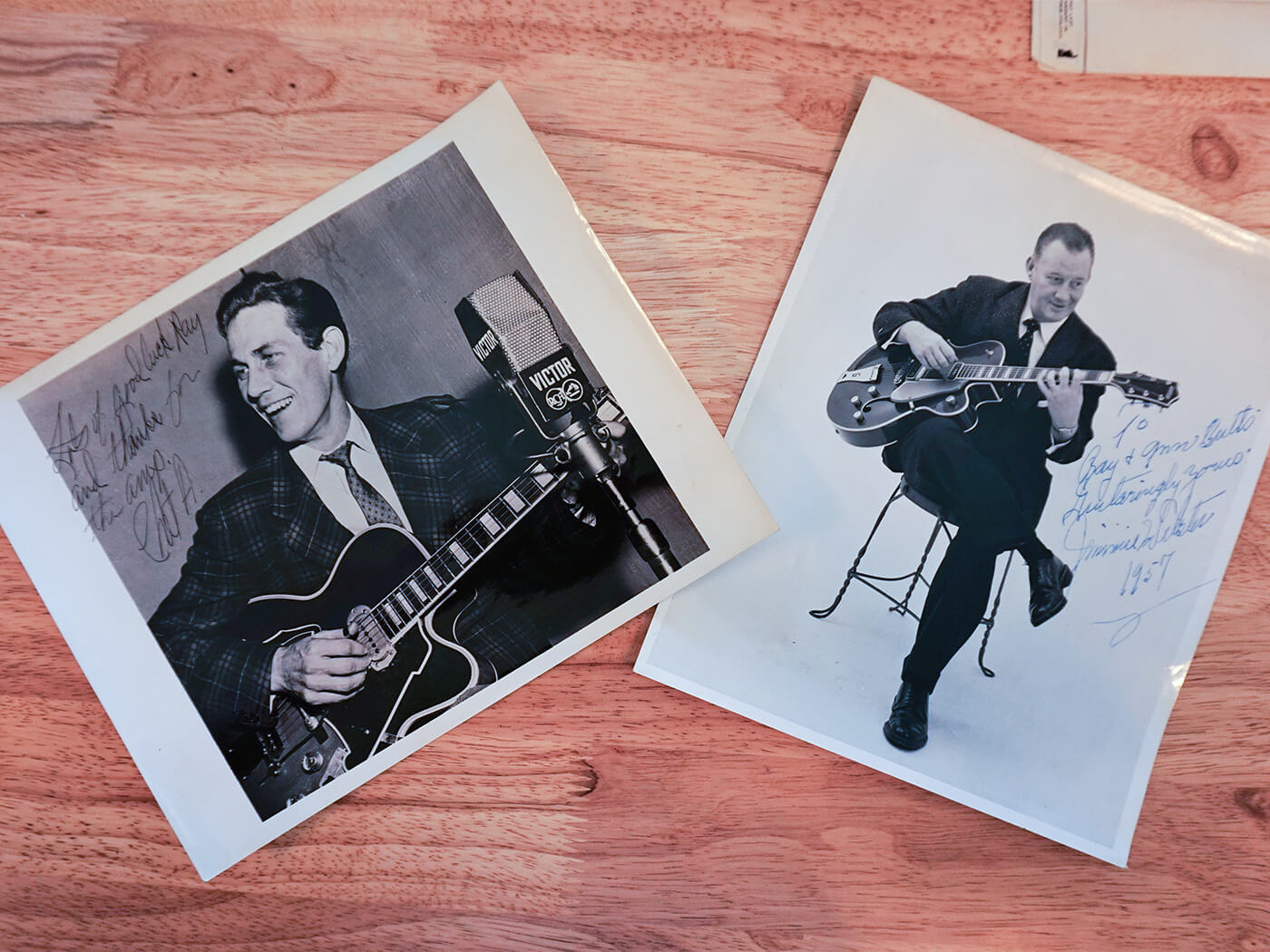 He figured that selling what we might now call a ‘boutique’ amp for $495 to smalltown musicians would be tough, so he went to Nashville, got in touch with Chet Atkins and showed Chet the amp. Atkins played it that night on the Grand Ole Opry. Impressed, he put in an order.

Letters between Atkins and Buts throughout 1954 show the appreciation that the guitarist had for the unique amplifier – and how keen he was to have his own as soon as possible. In a letter from May ’54, Atkins writes that he will definitely be using the amp on his records, but that its real benefit will be when playing live, “because you can get the same sounds you get in the studio.”

Ray was meticulously building the amps on his own and one at a time. Clearly they took a while to complete, as Atkins checks in with another letter in June, writing, “I was hopin’ that you would have come strollin’ in with the amplifier by now.”

Chet didn’t have to wait too long. In August, Ray sent a letter asking how the guitarist was enjoying the EchoSonic, if he’d used it on his recording sessions in New York, and enquiring whether other musicians had given their opinion.

With Chet Atkins playing the amp at shows and sessions, it wasn’t long before more people got in touch with Ray to find out how they could get an EchoSonic of their own. He only built 68 in total, but the list of influential musicians that owned and played them is impressive, featuring many of the world’s biggest names in guitar at the time.

Among those was Scotty Moore who, after hearing a Chet Atkins recording, got in contact with Ray and purchased EchoSonic #8 in May 1955. He later added a pair of satellite amps that Ray built for him to bump up the volume live. The Butts archive includes a cheque from 1957, signed by Vernon Presley, which was likely payment for the additional amps.

Other big names that used an EchoSonic include Carl Perkins, Roy Orbison, Luther Perkins and Paul Yandell. Yandell’s was later purchased by Scotty Moore in the 1980s and now resides with Deke Dickerson.

With his amp being seen and heard on some of the biggest hits and biggest stages of the day, it was no wonder that demand for the EchoSonic grew beyond a level that Ray Butts could fulfil. His papers in the mid-50s are replete with letters from people stating how much they love the amp, and wondering how they can get one.

The supply/demand problem had already been apparent to Ray as early as August 1954. In his letter to Atkins, Butts expressed concern at how slow the process moved, and that he was looking for some kind of financial backing or partnership. Among other possible solutions, Butts asked if Atkins could show the amp to Gretsch, and if they might be interested in becoming a dealer or distributor of some sort.

Further down the line this partnership was considered, with Gretsch looking into producing the amp, but it never came to fruition. Butts also sent an amp to Rickenbacker and was disappointed with their original response, though they later agreed a deal to produce a model based on his design: the Eko-Sound. Beyond this, the EchoSonic was also the basis for the Echoplex – another transformative piece of gear.

After inventing the Filter’Tron, Ray didn’t rest on his laurels. For the rest of his life, he ceaselessly looked to innovate and improve on his own designs and those of others. In his first correspondence with Gretsch regarding the pickup in 1955, Ray reveals he already had two designs for the Filter’Tron: one more efficient, the other less expensive to produce. He also lists all of the tonal inadequacies of DeArmond pickups and details how these issues are corrected with his design, writing that Chet Atkins says they are the best he has ever heard.

Assisting the guitarist with recording work and helping him build his own studio, Ray continued to provide a tone-perfecting service to Atkins for many years. Katha House, Ray’s daughter, remembers this work well: “Chet would bring over a guitar and he’d say what he didn’t like about it, and the first thing my dad would do is pull all the wiring out and say, ‘Who put this mess in here?’ Chet would tell him what he wanted it to sound like and, next thing you know, it’s what Chet wanted.”

The work with Gretsch and the creation of new and improved pickups ran through the late ‘1950s and into the 60s. Ray helped the company develop the concept of a ‘dual-channel guitar’, inventing a stereo pickup that was used by Chet Atkins, Jimmie Webster and others that utilised thumbpicking techniques.

And as well as the first humbucker for electric guitar, Butts could claim to have developed one of the first piezo pickups for acoustic guitar, sometime in the 1960s. As it garnered little interest from those he showed it too – including Atkins, who felt the tone didn’t work with his playing style – he dropped the idea. It was another instance of being ahead of his time; the same concept was later picked up by others and widely used right up to the present day.

Ray’s notebooks show him to be a tireless inventor in all things musical electronics. When his attention came to something that he thought needed improvement, he set about improving it. Some of these designs are a little mysterious now. There are notes and pictures regarding a device that goes into the output jack of a guitar, with many notebooks and sheets describing improvements to tone, but it’s not clear what exactly the device does. Other projects range from microphone accessories to loudspeakers, and even an acoustic guitar preamp with graphic equalisation.

As well as creating new devices, Ray would redesign products he came across and found lacking, often contacting companies and letting them know he had improved on their work. In one instance, he wrote a letter to an organ manufacturer explaining his redesign of one of their products, offering to partner with them to make the improvements and even stating that he had prepared documents for a relevant patent application.

“He wasn’t a businessman and he never pushed it further. He could have died a wealthy man but he didn’t. He just wasn’t interested in the recognition”

Both prior to creating the EchoSonic and after its successful start, Ray was making reverb and echo devices. In the early 50s he developed a tape reverb unit with a variety of features, including a reverse reverb/delay setting attained by running the tape backwards. In February of 1954, a letter from Ray’s attorney informs him that their patent application was rejected as some parts were possibly too general or similar to other devices. It looks as though Ray, unwilling to leave an idea unperfected, continued to progress the concept after this.

In 1957 he looked to patent another reverb/echo device, this one designed to be easily installed or pre-built into any other instrument amplifier. The idea would have appealed to players who already had an amp they favoured, or those that didn’t want to pay for the EchoSonic. This way they could still get that magic slapback sound when playing live with their own rig – a concept not dissimilar to later effects pedals or, indeed, the Echoplex.

Above all, Ray Butts seems to have been motivated by a challenge, especially when he was told that something couldn’t be done. Chet Atkins came to realise this too. When the guitarist wanted Butts to fix his camera, instead of asking directly, Atkins simply left the camera on his desk. When Ray enquired about it, Atkins replied that it was broken, and that all the repair shops said it couldn’t be fixed. That night the camera was opened up and in pieces on Ray’s workbench, and soon enough it was working again.

But bringing a product to market, building a company around it – these things didn’t engage Ray as much. “He was not a businessman and he never pushed it further,” says his daughter Katha. “He could have died a wealthy man and he didn’t.”

This sheds light on why some of Ray’s remarkable inventions didn’t garner even greater acclaim – or didn’t go into production at all. But it also helps explain why the name Ray Butts isn’t as prominent in the minds of guitarists as Leo Fender, Les Paul et al. It seems that brand, marketing, growth and self-aggrandisement were all foreign concepts to Butts. “He just wasn’t interested in the recognition,” Katha confirms.

What Ray Butts cared about was perfecting the tools that musicians had at their disposal, and happily it seems like his importance to the development of guitar gear and the evolution of pop music is becoming more widely recognised. As well as the impact his inventions have had on the story of the guitar, Ray’s legacy can be seen in how much he influences the tinkerers and tone shapers of today.

“This is what I’ve heard in my head for so long, it feels like a big exhale!” David Knudson on how he’s pushed the...

DIY Workshop: How to fix the tuners on your Les Paul