“It’s nice to veer into the darkness but not get sucked up by it”: Soccer Mommy on her writing process, working with Daniel Lopatin, and new album Sometimes, Forever

For her surprising third album, US bedroom-pop savant Soccer Mommy worked with an unusual producer to craft a work that feels alive with shared ambition. We find out more.

We’re all standing on shifting sands, trying to figure out again and again that the only constant available to us is change. We can fight it, or we can embrace the fact that our desire for our surroundings to play by our rules usually leads to nothing but a period of readjustment after it all goes another way. The title of Sophie Allison’s third album as Soccer Mommy distills this feeling into two words: Sometimes, Forever.

“​​I love contrast, I love being able to play with that,” says the Swiss-born, Nashville songwriter. “That comes up a lot in my writing, and I think that really has to do with the way I mentally process things. I’m very devil’s-advocate with myself a lot of the time and kind of go back and forth with myself on things that I’m struggling with.

“It’s always hard to accept that things are not concrete and consistent, and that’s really the way the world is. There are some things that come and go, and are always returning and always leaving in this constant flow that can be hard to grasp. It’s really easy to get stuck in things as you feel them, and not be able to have that sense of understanding from a wider perspective.”

Allison’s music has long embraced the fact that things change – it is the kind that could have easily stayed the same for a long period of time, but instead she has sought to consistently reframe her indie-rock roots. She broke through as a bedroom-pop auteur and, aged 20, moved on with a crisp, unadorned debut album, cutting back against the grain again two years ago with Color Theory, a rich, shoegazey collection that toyed with structure and a loose concept. Sometimes, Forever offers another intriguing twist.

It was recorded with producer Daniel Lopatin, also known as Oneohtrix Point Never. On paper they are odd bedfellows: one a guitar-favouring indie songwriter, the other a musician noted for involved, immersive electronica, soundtrack work with the the Safdie brothers, and high-profile tie-ups with the Weeknd, FKA Twigs and Rosalía. Their collaborative relationship doesn’t begin and end with the odd flourish – it is a vivid evocation of what might exist in the space between two established aesthetics.

The fundamentals of Allison’s writing – a keen attention to melody, resolute guitar lines and an affinity for textures – slot together with Lopatin’s elastic synth patterns and lurching percussion, each side goading the other to get its point across before they steer the conversation somewhere else. The single Unholy Affliction is a solid starting point, exemplifying a potential push and shove becoming give and take in execution.

“When we started working on that was when I started getting really excited,” Allison says. “It was really early on and we were doing this trial period of like five days. I think it got us all amped up with the possibility of what we could really do. The demo was a little bit more fleshed out – it sounded very much like what the second verse of the song sounds like, with the full band. We were gonna do this take, we came in and he and Matt [Cohn, engineer] were playing this thing that they had made at their hotel the night before, which is the sequence at the beginning and throughout most of the song.”

Lopatin and Cohn had taken Allison’s demo vocal and sewn it onto a growling, multi-syllabic synth loop. From there, they wove in fresh studio takes, with drummer Rollum Haas requiring only a couple of passes to add live percussion that is at turns skittering and punishing. A short while into their time together, they had proof of concept.

“Whenever you work with a new producer, there’s some anxiety starting out, because you don’t know how they work, you don’t know how it’ll go,” Allison admits. “But he was really excited about the songs and when we got in there, we spent almost the entire studio time on the live band takes and the vocals. He wanted to get that just as good as any production stuff he wanted to do. It was very much that the core of this is these songs and the band, and we wanted it to have a raw element, an aliveness to it, and then to be able to add this magic on top of it. He wasn’t the kind of producer who wants to do all these amazing tricks, have all this flair, and cover up the core of the song. And I think that’s why it works.”

While Allison’s world has been upended by both her career trajectory and the screeching halt forced upon her by the pandemic, writing songs has remained an outlet rather than a task mandated by her day job. That is apparent in the gliding melodies of Shotgun, a canny choice as lead single that subtly introduces the new Soccer Mommy palette while serving one of her most indelible choruses to date. Each twist in its four minutes feels like a release. 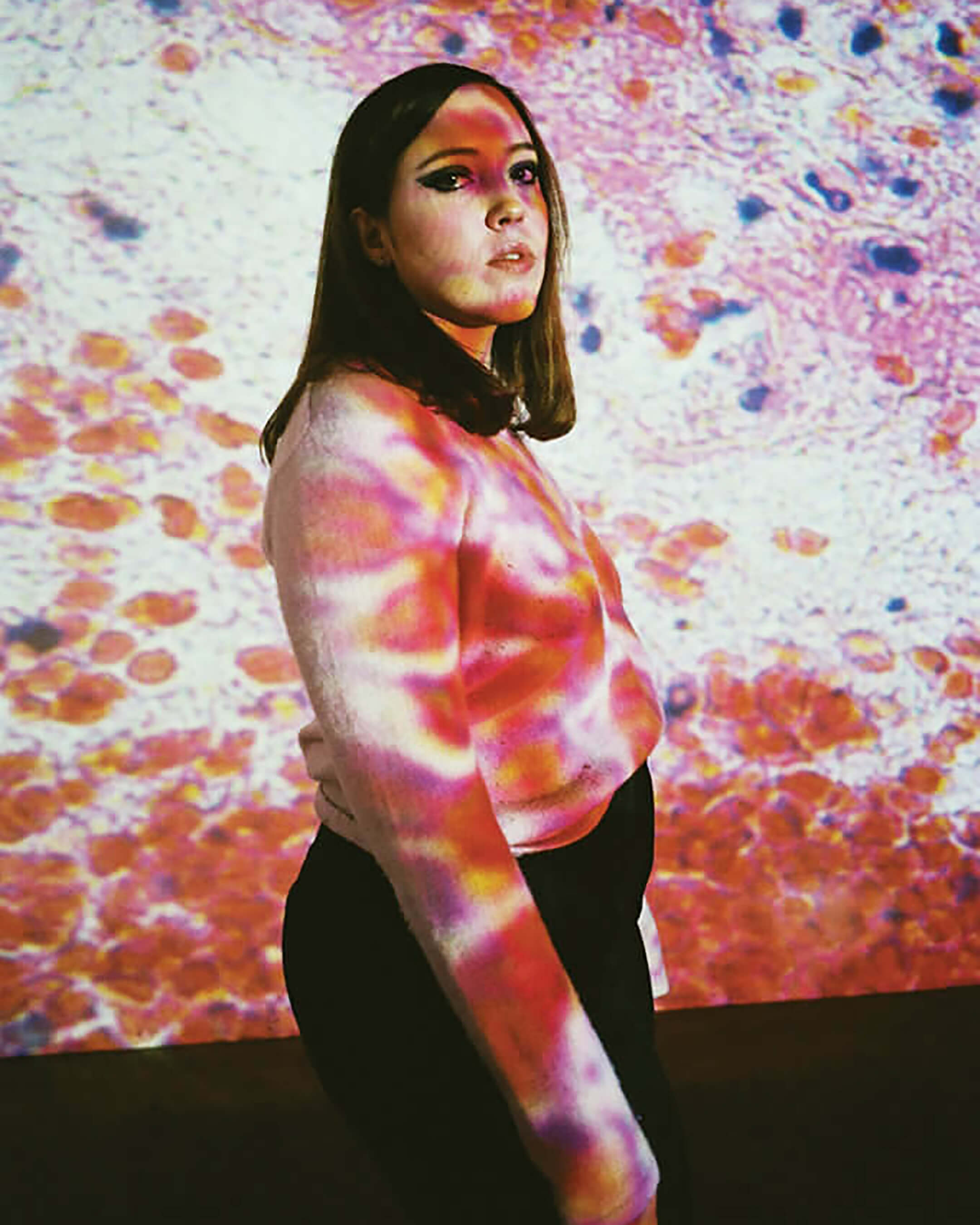 “I write constantly, it’s just like a source of entertainment,” Allison says. “I’m a very easily distracted person and it’s one of the things that can occupy me. Even if we’re sitting in the green room, if I’m feeling inspired, I’ll get my guitar and begin playing around. I’m not gonna loudly be singing out when I’m writing, but I can do it in my head. I’ve done it my entire life, so it doesn’t feel like work, and it doesn’t feel like I have to make myself work. I’ve never ended up having a problem finishing a record on time.”

Equally, there is something deliberate about this record that appears to fly in the face of Allison’s steady accumulation of new songs. Sometimes, Forever is not a loose, easygoing collection of material. It is meticulously sequenced, running its more esoteric moments into some of the most straightforwardly pleasing, pop-leaning stuff she’s ever put her name to. While it lacks the thematic bent of Color Theory, that LP’s careful presentation has obviously left its fingerprints on her process.

“When I was crafting the tracklisting I felt that it flowed really well, in the same way that it feels good to have a couple of fast songs and then slow it down a little bit,” Allison says. “It’s kind of nice to veer into the darkness but not get sucked up by it, you know? To be able to have a reprieve. I feel like it does give this magical sense of lift when it comes out of those kinds of sections.”

On Sometimes, Forever Allison alternated between her reliable Strat, a ’94 Custom Shop model, plus two custom Novo Serus Js, alongside acoustic tracking with a 1964 Gibson LG-2 and a few interjections from her Jaguar. With two lead players in her band – Julian Powell and Rodrigo Avendano – Allison studiously handled a lot of rhythm work and limited her gear in pursuit of consistency. “I was keeping it pretty similar to kind of pull the sound together a little bit,” she says.

Allison and Lopatin also avoided going down the DI route, instead using a tour-tested combination of a Fender Princeton, a Silvertone amp and a Roland Jazz Chorus, which was employed for a lot of the acoustic flavours. “I didn’t want to rent a bunch of things because I think the goal for this album was to capture what we actually sound like playing together,” Allison says. “We click and that’s something that I personally think is really fun to hear, when you can tell that the band is playing off each other.”

Another interesting obsession that keeps Allison off balance creatively is her desire to achieve perfection while safe in the knowledge that she’ll never get there. Setting yourself impossible targets is a Sisyphean form of torture but can also be hugely positive, provided you have the ability to recognise and take heart from marginal improvements. If Sometimes, Forever is nominally about accepting things that are out of our control, then Allison’s pursuit of flawless work is also couched in the same terms.

“In my mind my perfectionism isn’t some sense of wanting to be the biggest artist in the world, you know, or those kinds of goals,” she says. “It’s being satisfied with my art, so I think it drives me to constantly want to grow and learn and do more. I mean, every new album is always the album I’m happiest with, and then as soon as it’s time to start working on the next one, I feel like this next album is gonna be so much better. It just keeps me constantly pushing myself.”

Soccer Mommy’s Sometimes, Forever is out on June 24 through Loma Vista.