“I cut the tip off my index finger on my fretting hand making a three-bean salad!”: The Amazons’ Chris Alderton

The Amazons’ guitarist on their new album Future Dust, finding catharsis in his rock ’n’ roll heroes and the pains of being the designated chef… 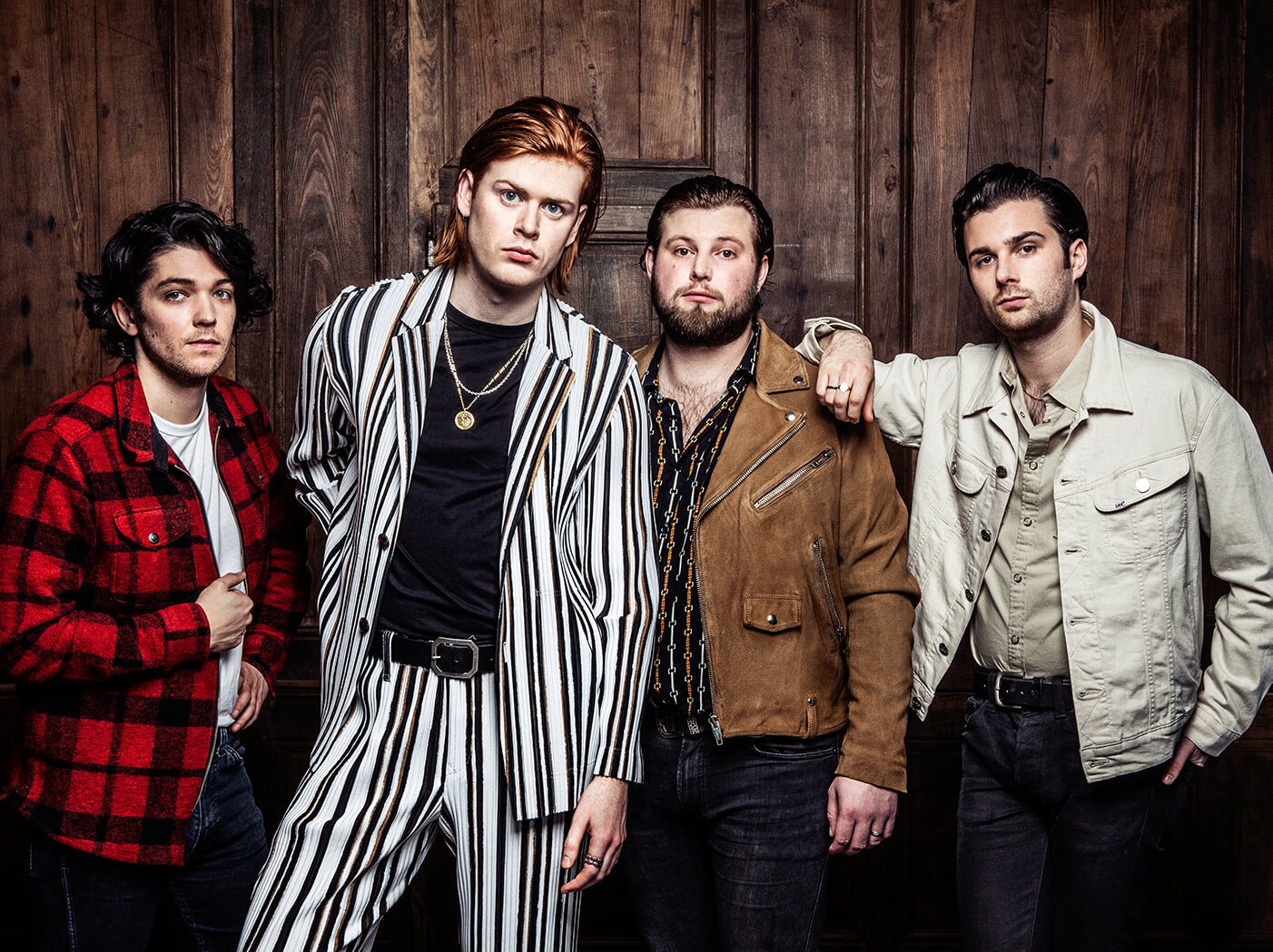 Formed in 2014, indie stalwarts The Amazons quickly asserted themselves as torch-bearers for no frills, arena-ready British guitar singalongs. Their debut album was an unexpected success, landing at No. 8 on the UK Album Charts and gathering critical acclaim, resulting in the band being nominated for several Best Breakthrough Act awards, including the BBC’s Sound Of 2017.

Prior to the release of their new album – which entered the Official Charts at No. 9 in early June – we spoke to guitarist Chris Alderton, the man aiming to put guitar solos firmly back in the public interest.

Contrary to its title, Future Dust sees the Reading-based band look behind them for inspiration, citing Jerry Lee Lewis and Led Zeppelin as gateway drugs to the blues, where they delved into the back catalogue of Howlin’ Wolf and many other giants of the guitar.

Chris cites the need for new bands to revisit the history of rock music. “It’s super-important for all guitar players to study that history. It surprises me how little I read about that in interviews with other players in more popular music. I think it’s really important, but at the same time, I think that we’re the only people doing it in our world.”

Chris’s incentive to revisit a bygone era underpinned the innocence of the band’s debut, along with a leftfield influence in 1970s punks The Slits. “Coming out of the first album, from my perspective, the guitar playing was really simple.” he admits. “I read a book just after we finished by Viv Albertine called Clothes Music Boys and despite the title, it’s a really interesting read. It’s one of the first guitarist biographies I’ve read.”

Chris then delved deeper into the world of rockstar memoirs, noting Keith Richards’ Life and Light & Shade: Conversations With Jimmy Page as turning points in the compositional process.

“People usually want the juicy gossip in those books, but I was more interested in where the basis of rock ‘n’ roll comes from. Really trying to understand every thread and tapestry. Proper blues guitar has been diluted in modern guitar playing; a lot of generations have gone past. The whole band has been going back through the influences of our heroes, just trying to discover it for ourselves.”

During the band’s search for a more ruthless, aggressive sound, both Chris and singer Matt Thomson also read Jerry Lee Lewis’ biography Hellfire. The biblical references and nods to rock ’n’ roll being ‘devil music’ were particularly poignant for The Amazons duo, serving as direct inspiration for their long-player’s darker, more introspective sound.

Both lyrically and sonically, Future Dust harnesses an undeniable progression from the band’s self-titled debut. Chris notes that: “Matt took a lot of inspiration out of Hellfire. The way that’s written is poetic,” and that influence is audible in his confrontation of topics from social media to depression and eating disorders.

While the band have decided to look to history in order to move forward, their ability to write bold, audacious riffs and captivating melodies is enhanced by their association with one of the most in-demand producers of the present day. Once again working with Catherine Marks (Wolf Alice, The Big Moon) following the success of their debut, their pre-existing relationship enabled them to fully realise their ambitions with album number two.

“Working with her again meant we started with 20 per cent progress. You don’t need to worry about knowing each other, you just show up and go,” Chris enthuses. “She had a real attention to how the songs feel. She gets really emotionally attached to every part of the song, from the drums to the lyrics. If the part isn’t right, she’s not afraid to say. It was an aspect of recording that I’d never experienced before. Managing the band’s emotions is as important as managing what they’re playing.”

Firmly in keeping with their vintage leanings, they chose work within what would be considered a constraint in the modern era – and Marks duly complied. “With learning about these old rock records, too, they didn’t have like a hundred tracks – so we tried to stay true to that. We ended up with only four or five guitar tracks per song.”

While the band chose to stick with Catherine Marks on their sophomore LP, they pushed themselves outside of their comfort zone in other ways, choosing to set up camp at Monnow Valley for a fortnight, followed by a further seven-day stint after a short break in between.

“It was the first time we’d done a residential recording, so it was great to get up, have a coffee and then get going. We didn’t have the separation you get when not recording on site, but I quite liked that. I liked thinking about it all the time and I think the rest of the band did, too.”

Despite the band’s renewed camaraderie on Future Dust, one thing they made sure to shy away from was more than two weeks together in one space, in order to stave off the cabin fever and to avoid ending up in Brian Wilson territory.

“Catherine has done three-week stints in the past and she said it descends into insanity! People recording Hoovers and setting up amps in tents for different frequencies. Having it split like that made us take a step back and realise what we needed to do in the last week. Inevitably, there were bits we had to pick up at a studio later, but it was mostly all recorded in those three weeks.”

Chris’s guitar of choice has been a Duesenberg Caribou for a number of years, being the mainstay of his collection despite his producer’s reservations. “My go-to is a Duesenberg Caribou. I got that just before the first record and Catherine didn’t like it!”

“On the new album, I think she forgot she didn’t like it. I’ve always maintained it sounds amazing and she agreed this time. It’s definitely the best-made guitar that I have. Everything just works exactly as it should. I also have a 2002 Custom Shop Non Reverse Firebird, I got that just before recording to treat myself. I had a standard version in Pelham Blue with mini-humbuckers in it initially, but I didn’t like the colour, so I tried to replace it and this one sounds ace. And it looks cool, which is obviously the most important thing.”

During the recording sessions, The Amazons’ lead guitarist chose to work with a stereo rig throughout, utilising his beloved Vox AC15 C1 as the foundation of his sound, while switching between a ’65 Twin Reverb reissue and a Marshall Astoria as the second amplifier.

“The Marshall is super punky if you crank the volume on it. It’s good to have a variety of amp tones with the Vox as a constant backbone. I drive the amps just enough so that they don’t get any louder with pedals, it just compresses things and I get more saturation with them.”

Chris’s primary incentive for using a stereo-amp setup is the difference it makes to his pedals, namely his leftfield-choice reverb, which he bought on a whim. “I always have a stereo rig with a TC Hall Of Fame and a DigiTech Polara. I took a gamble with the Polara and it’s the best spring sound I’ve found in a pedal. Having a stereo reverb makes quite a lot of difference, it just makes the whole stereo image appear more. Both of my guitars are panned quite far out left and right, with Matt’s more central. You get a fairy-dust sprinkle from the reverb being left and right on the record.”

Despite the meticulous precision with which the guitar tracks were recorded on this album, and the immediate success it garnered, putting it all together wasn’t all plain sailing for Chris. “After the first record, I hit a wall. I can play the guitar generally the way I want, but creatively, I was stuck in the pentatonic box, playing the same thing every time I picked up a guitar. There were some songs where I didn’t know what I wanted to play, and in not knowing I’d revert back to the pentatonic and end up going down the same routes.

“When I read the Keith book, he spoke about listening to records and learning the licks, and for me personally, that’s how I got better. Learning the solo of a song rather than sitting with scales. The same way you can’t pick up on the nuances of a track if you’re learning it through tab.”

The way Chris talks so casually about learning solos by some of rock-guitar’s greats is what some of us can only dream of during our practice routines. Although what we can all take solace in is that we’re not all hamstrung by the drawbacks of being our bands’ designated chef.

“I was the main cook in the studio and I cut the tip off my index finger on my fretting hand making a three-bean salad! It was across and through the nail, so the exact bit you press on the fretboard was gone! I had a massive freak out, ended up spending the night in Abergavenny A&E and then had to figure out whether to cry about it or see it as a challenge.”

Chris’s admirable approach saw him accept the injury in his stride, choosing to learn major parts of his solo sections with just three fingers while recording the overdubs. With this anchored determination in his ability, it’s no wonder he isn’t fazed by the need to follow the success of the band’s previous release.

“We tried to press the reset button after the first album. After the tour, everyone had heard the songs a thousand times over and we were all tired. Some of the songs on the debut were from when we were 17 years old, y’know! We even hid all the artwork from the first record, so we didn’t have to look at it anymore. With the new process of discovery, everyone was keen to up their musicianship and just be better all round. There was a renewed confidence and excitement to play something new.”

When asked whether they’re prepared to reveal something that goes against the current wave of music that dominates the UK radio waves, you can almost hear him smirk through the phone. “We’re all super proud of what we’ve done, so if it doesn’t do as well as the first, we’re still comfortable with what we’ve made.”

Once the (future) dust settles around this album, The Amazons may just be the band to herald in a new golden era for the electric guitar.

Future Dust by The Amazons is out now on Fiction Records.