“I don’t think any of us were really expecting such a feverish reaction!” Trivium on how they’ve been blown away by the response to their latest album

Corey Beaulieu on how the metal kings understand the assignment 10 albums in, their ultimate trust in their tried and tested gear, and buying disused aircraft hangers.

There’s no such thing as ‘tenth album syndrome’ for a reason: not a lot of artists get that far. Many bands split up when their members want a quieter life with a family or when explosive tensions between members strain and then break creative relationships. With addiction and depression so common within music, sometimes the most iconic rockstars live fast and die young. Some bands fade into the background slowly and quietly. The artists who do get to album ten reach the summit weary from the climb, fatigued and creatively drained, having settled into a groove that satisfies fans just about enough to keep them buying concert tickets but not necessarily bettering themselves.

Trivium are not one of those bands. Theirs is an intriguing, anomalous trajectory, particularly where their last decade or so is concerned. After roaring into the 2010s with the iconic cry of “IN WAAAAAAAAVES!”, the middle of the decade was fraught – if you glanced away from the Trivium camp for one moment and then looked back, there’d be a different person behind the drum kit. Moreover, frontman Matt Heafy’s damage to his vocal cords caused by years of improper technique when screaming meant that 2015’s polarising Silence In The Snow, Trivium’s only record without unclean vocals, marked something of a low point, distancing fans from the sound they fell in love with.

They were down, but they weren’t out. 2017’s The Sin and the Sentence saw the band surging back to the quality of their glory days, with Matt’s voice now back in working order. Later, last year’s majestic What The Dead Men Say offered fans some sleek new riffs to punch through the monotony of the world’s initial shutdown due to COVID-19. Just over 18 months later, they returned to complete a trifecta of storming triumphs with In The Court of the Dragon, which some have argued is their best release to date. It’s a rare statement to make about an album so far deep into their career, but it speaks volumes for the amount that this band have left in the tank.

“It kind of took us off guard,” says guitarist Corey Beaulieu of the success of In The Court of the Dragon. “When the record first came out, every time I refreshed Twitter or Instagram, I was getting tagged in something. We’ve never had the kind of momentum where three albums in a row have been so accepted and loved by fans. I don’t think any of us were really expecting quite the feverish reaction [In The Court of the Dragon] got, or of people talking about it being possibly the best record we’ve ever done. It’s crazy.” 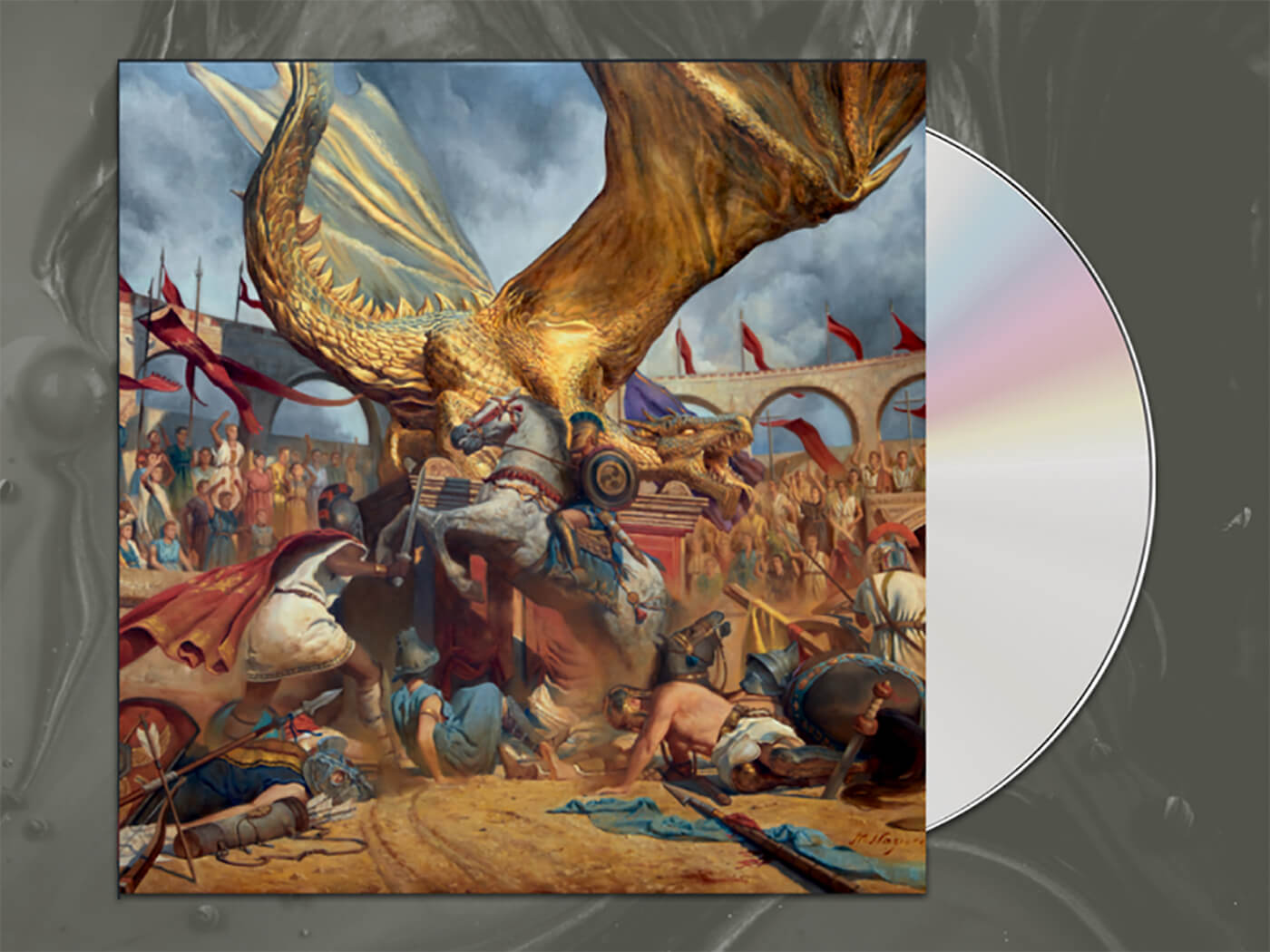 Trivium ended up continuing the momentum of The Sin and the Sentence and What The Dead Men Say almost without being given much of a choice. “COVID pretty much decided that for us,” Corey says with a shrug. With their diary full of touring plans for 2020 wiped clean, and with nothing else to do, they spontaneously decided to hunker down and write some new material. The process felt easy and natural , and although many artists have reported feeling uninspired with nowhere to go and nothing to look forward to, this was not an experience Trivium ever had. “I don’t think [lockdown] was really that big of a deal,” Corey asserts. “When we’re not on tour, all of us just stay home anyway, so it really didn’t change anyone’s lifestyle. When I’m [not on tour], I go to the grocery store and the liquor store and then I stay at home until I need more [food and alcohol]. Matt has his kids. No one really [went] stir crazy.”

The Floridian quartet took a simple, carefree approach to piecing together In The Court of the Dragon, returning to the “old-school jamming in the garage” style in which they created songs at the beginning of their career. While, usually, they would have accumulated ideas for new songs while on tour, they started this time around from scratch, thinking out loud and making things up as a group as they went along. There were no deadlines and no pressure, with the world outside riding off the still freshly gleaming What The Dead Men Say.

“It was kind of unexpected, because we weren’t planning anything, we didn’t have anything prepped, and just organically, this great record came out. Who knows if these songs or this record would be what it is if we were touring normally like we would have been?”

Entering the record without a plan also meant they entered it without a specific goal for evolving their sound in mind. It was never a particular worry: “We’ve figured out what the Trivium sound people really want to hear from us [is],” says Corey. “We can’t rip people’s hearts out and do something completely different. We know what people want to hear from us. It’s why it’s crazy that we put out a record that has multiple songs over seven minutes in length and those are people’s favourites.

“They love the musicianship of us playing tonnes of riffs and solos, but still has catchy sing-along melodies. The three minute, super simple songs aren’t quite the ones that people want to hear quite as much. We’ve experimented enough in our career that we came to a point where we know what we want to play as a band.”

Tools for the job

If they’re confident about what they want to play, they’re similarly assured in the gear they use. “I guess we’re stuck in our ways as far as [the gear] we like to use is [concerned],” says Corey. Theirs is a simple setup: Corey and Matt only used one guitar each on the record, with Matt using his new signature Epiphone model and Corey, a long time Jackson fan, playing his Winterstorm signature series guitar, a jagged, gleaming white instrument that looks like it could have been carved from ice. Both of these were plugged, for most of the record, into the same EVH 5150 Stealth amp that they have used for years. Because they hadn’t been away from the studio long, it made sense for them to stick with all of the equipment that they already knew worked well for them – and there was no need to fumble around to find the distinctive tone they’re known for.

The other major development in the Trivium camp, alongside the release of In The Court of the Dragon, involved finding a headquarters for the band, now that they had no shortage of time to look for one. The idea was suggested to them by their management as a way of eliminating the need to spend money on rehearsal space and space to store gear, and as a bonus, they would have the freedom to have a place of their own to use however they wished. The search took a while, particularly since they needed to avoid places in awkward locations or which would require a lot of renovation.

Then, one day, they had some unexpected luck. Matt had taken his family to visit his wife’s parents, and in the midst of an ordinary conversation, his in-laws mentioned that they knew someone who owned disused airplane hangars and was trying to sell one. “It’s in a really nice area, and the whole airport’s private so no-one seems to care [about the noise the band makes]. They’re used to loud as hell airplanes and all that stuff, so a metal band’s not too bad!” They’ve certainly gotten their money’s worth out of it, having filmed the music video for Feast of Fire there, and they’ve since used it for tour pre-production and a Twitch charity event to help touring crew people left out of work by the pandemic. They rounded off the year playing two livestreams directly from the hangar on consecutive weekends, the first a 10 year celebration of In Waves, the second offering full run-throughs of In The Court of the Dragon and What The Dead Men Say.

It’s all part of the plan for growth. Despite already having a reputation as one of, if not the, finest names in metal of their generation, Trivium are refusing to settle for spending the rest of their career at the size they are now. There are bigger venues to play that they’ve not set foot into yet, festival posters that haven’t yet got their name in the biggest letters at the top. “There’s a lot of people out there in the world [who we want to reach],” Corey concludes. “There’s plenty of room to expand things. There’s always something to do, and no time to sit back and relax. There’s always more music to make, and always more shows to play.”

In The Court Of The Dragon is out now.