From lights and rockets to flamethrowers and er… other stuff, these tricked out guitars would raise the bar for rock ‘n’ roll excess, and ensure that live shows would never be the same. 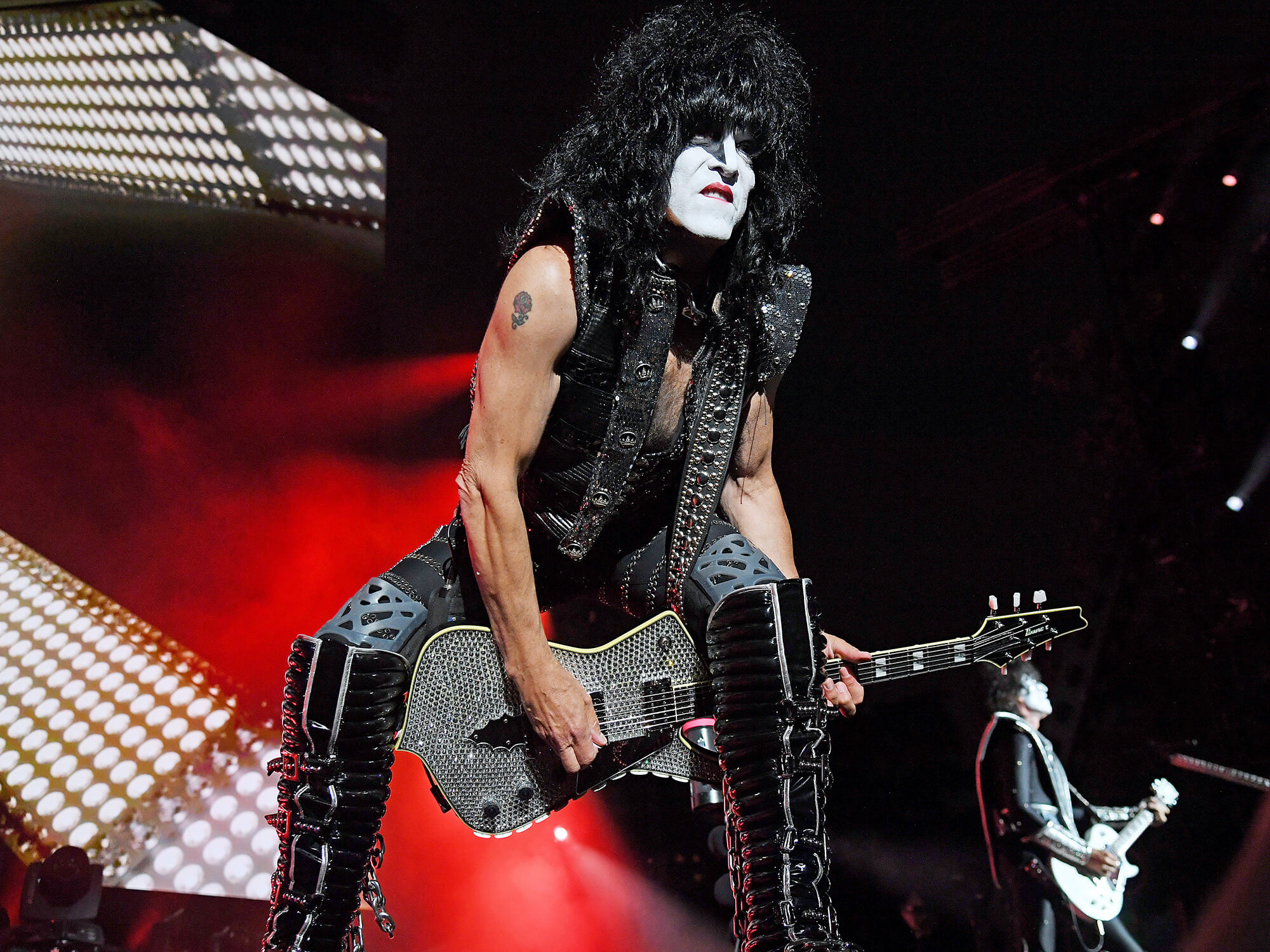 There’s nothing boring about the electric guitar. But some artists need a little more from their six-string. In their efforts to elevate theatre to the next level, these showmen require instruments that don’t just deliver tone and playability but also function as effective stage props.

So many kids picked up a guitar to emulate KISS. But it wasn’t necessarily the players’ technical prowess that drew them in, it was the larger-than-life personas they exemplified on stage. Ace Frehley  started incorporating guitars into the band’s theatrics in about 1975, first with a Tobaccoburst Les Paul Deluxe, the only guitar Ace was using on stage at the time. He had a smoke bomb fitted in the rout that would ordinarily house the neck pickup, which he never used. The fuse hung out of the pickup cover. When lit, the smoke bomb would create the effect that Ace had played his guitar so feverishly that the pickup had caught fire.

The smoking pickup created obvious technical issues with the guitar’s wiring, pickups and pots. But the effect evolved over the years. Eventually a white light was added inside the neck-pickup cavity, controlled by pickup’s unused knobs. This led to the smoking pickup’s better-known nickname, the White-Hot Pickup. The effect also migrated to a different instrument, later used in the Rocket Launcher Guitar.

Not only was Ace’s first Les Paul the first smoking-pickup guitar, it also featured bottle rockets taped to the headstock, which Ace would light himself. This sparkly, minor stunt proved the crude launchpad for a more explosive idea, one with a special place in the history of KISS theatrics.

At the end of Ace’s stage solo, the pickup would glow white-hot and start to smoke. The guitar would then be hoisted into the lighting rig using a cable attached to the back of the headstock. Later in the show, Ace would use the Rocket Launcher Guitar to shoot the lighting rig, on which an explosion would be triggered at the same time, and the White-Hot Pickup guitar would come floating back down. The gag was a crowd favourite and helped cultivate the Spaceman persona.

According to Ace, the Rocket Guitar was originally going to be a Laser Guitar, which would shoot a laser beam at various points on the stage, triggering explosions. “I had a fibre optic running through the neck of my Les Paul [built by Steve Carr] that connected to a high-powered laser to blow things up, right around that time, Blue Öyster Cult had blinded someone with one of their lasers so new legislation came out that limited the amount of wattage you could use in a laser on stage. That was the advent of using rockets in the guitar neck. It was supposed to be a laser beam and then I just went to fireworks.” According to Steve Carr, the band’s longtime guitar tech, the original laser guitar became the first designated Rocket Guitar.

In the hands of Tommy Thayer, the guitar remains part of the band’s show to this day, although it has evolved. Safety buttons have been put in place, making the firing of the rockets somewhat difficult to do while looking cool. The wiring for the charge ignitions still runs through a cavity in the neck.

Did anyone do more for stunt guitars than KISS? Ace Frehley’s original Light Guitar was a late 1950s Les Paul TV with a routed face that held almost 1,000 incandescent lights, powered by a Ni-Cad battery pack. The Light Guitar was designed by John Elder Robison, a former toy designer for Milton Bradley. Ace started using it in about 1978, and still uses a version of it when playing New York Groove. These days, the lights are LEDs – which don’t heat up like the original incandescent lights did – and are inlayed into the carved top of a Les Paul Custom. John 5 also has a Telecaster version of the Light Guitar that he uses with Rob Zombie and his solo band. It’s powered by an RC battery that lasts about two songs or so.

Rammstein’s pyro guru Nicolai Sabottka is always developing new and exciting ways to bring the boom to the stage. On one tour, Paul, Richard and Oliver used specially designed flamethrowers that were strapped to their respective guitars, which shot out a high-pressure burning concoction of air and petroleum mist. The flamethrowers were attached to the band’s regular guitars, rather than guitars specifically designed as flamethrowers. With the fearless Sabottka at the helm, Rammstein continues to push the boundaries of safety and visual spectacle.

The flamethrower guitar has also crossed from stage theatrics to the movie theatre. As anyone who has seen the 2015 film //Mad Max: Fury Road// will remember, the Doof Warrior wields a flame-shooting double-necked instrument. Designed by found-object sculptor Michael Ulman, the body of the guitar incorporates a bed pan and a French horn, connected to a bass and a guitar neck. We took a deep dive into the guitar itself in our Guitar On Film series – check it out and be amazed at the work that went into this truly unique instrument.

John 5 has claimed that this unique guitar has anti-freeze in it but that’s not quite the case. Rather, the substance that gives the Lava Guitar its lava-lamp-like appearance is a Hughes Wave Motion Machines Formula, the colour of which called Anti-Freeze Green. Hughes Wave won’t give out their formula but we assume it’s a close variant of the Drakeol mineral oil used in lava lamps. The oil also means it won’t freeze (easily), which is handy. The body of the guitar, which also serves as an acrylic casing for the fluid, was made by Ken Meyer Guitars.

John 5 was not the first to do this, of course. In fact, it had been done by previous Rob Zombie guitarists. Mike Riggs had a Fernandes guitar filled with fake blood. As he said in an interview: “Originally I wanted to have maggots and old meat in the guitar. Then I was talking with my little cousins at home, and they went, ‘It would be cool if you put blood in it!’”

Kirk Hammett also had an ESP WaveCaster that was filled with blue liquid from the same company that John 5 got his from. Allegedly, the casing broke and soaked the electronics but the guitar has since been repaired and resides in Metallica’s warehouse.

Among the many iconic guitars used by Prince during his career was a Hohner Mad Cat Telecaster. In 1984, luthier Roger Sadowsky was tasked with making several replicas for Prince to tour with. Two of them were a little different – they were custom made to replicate a scene in //Purple Rain// in which Prince climbs onto a stack of speakers and rubs the neck of his guitar until white liquid sprays from the headstock. Guitars have always had a phallic essence to them, and Prince had these guitars made to drive the point home just a little harder.

“In the //Purple Rain// movie, there is a scene where he climbs to the top of a huge mountain of speakers, grabs a guitar and masturbates the neck until the guitar ejaculates onto the audience,” Roger tells us. “The guitar was a prop and connected to a tank of ivory liquid off stage. Prince wanted a fully playable guitar that could also ejaculate. I ran copper tubing along the side of the truss rod, and it terminated at the tip of the headstock. On the body side, it terminated in a compartment we routed in the back so they could install their solenoid valve that connected to the tank of ivory liquid. I called these two guitars the Ejacucasters!”

The guitars sounded good too, thanks to their DiMarzio pickups. They looked so good that Roger himself couldn’t tell the difference between the Ejacucasters and the Hohner replicas when he went to see Prince on tour.