Standout compressors for your next stompbox squeeze. 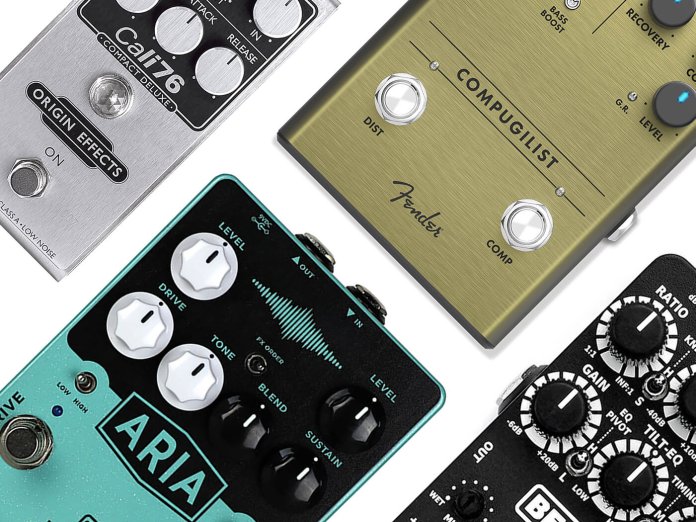 Searching for a compressor to add to your rig can be pretty tricky, what with the endless options, from cheap and cheerful stompboxes to pro-level units. To make things a little easier for you, we’ve come up with a quick – albeit varied – list of eight contenders. Any one of these would be a sound choice for your latest stompbox squeeze.

Released back in 2018, the Fat General marked the start of what has become a glorious collaboration between Adrian Thorpe and Lovetone’s Dan Coggins. While the pair have since released a bunch of brilliant pedals, the Fat General remains one of our favourite compressors.

Based on the Dinosaural OTC-201, this is a dual-mode compressor with plenty of functionality. Blend is the subtler of the two and while its effect on dynamics is pretty minimal, it makes everything sound just a little bit better with added presence and thickness. Juicy, on the other hand, is meant for some serious squishing action and will require a dash of restraint on the controls to keep your tone sounding natural.

Lists for £219. Read our review of the Thorpy FX Fat General.

Widely regarded as one of the best new compressors in the business, Wampler’s Ego Compressor brings new levels of control to the Ross/Dyna Comp style of compression with the inclusion of an ingenious blend knob.

With the ability to cover all types of compression, from country squish to tube sag and studio-grade parallel compression, the Ego ensures your playing dynamics are retained without colouring your tone. With comprehensive controls and a tonal purity thanks to its OTA compression circuit, you’ll be hard-pressed to find another pedal that works just as well as an ‘always-on’ effect as it does a traditional squeeze box.

Walrus Audio is known for the uncompromising quality of its products, and the Deep Six V3 is no exception. If you’re thinking of heading into a studio to record, this could be a vital tool in your kit bag. In a nutshell, Walrus Audio has created an elegant, studio-quality compressor in a pedal format with the Deep Six V3. Whether it’s elevating an underwhelming pickup or pushing an overdrive pedal up a notch, this pedal will help you get the most out of your rig.

Origin Effects has handily created an impressively convincing tribute to the classic UREI 1176 studio compressor in the form of the Cali76. With miniaturised components and stacked circuit boards, the Cali manages to deliver Class-A circuitry and low-noise transistors, for true FET compression. It can run at nine or 18 volts, with the latter recommended for greater headroom, and features an added ‘Dry’ knob for even more tweakability. It’s an outstanding compressor that seems to work with you rather than against you and almost every time you switch it off, it’s to the detriment of your tone.

Diamond’s goal when creating its 2004 guitar compressor was to emulate a studio vocal channel for the six-string: a ‘guitar channel’ with dynamics and simple tone-shaping tools to front your signal chain. The EQ knob is extremely versatile, musically shifting frequency balance and allowing you to tailor your sound to your guitar more accurately. The optical compression is smooth and organic, so much so that Diamond has even made a Jr version, a version for audiophiles called the SE, and an affordable version of the SE called the SL. Also, it’s yellow. Gloriously yellow.

If you’re worried about a compressor pedal taking up vital real estate on your already busy pedalboard, then the Compugilist may be right up your alley. Cramming both a compressor and a distortion effect into one pedalboard-friendly chassis, this pedal is as functional as it is sleek. Both analog effects are also independently switchable, which means you can use them stacked or by themselves. Even with all this functionality, controls on the Compugilist are easy to use. And as an added feature for live performers, Fender has included LED-backlit knobs in the design for easy tweaking on a dark stage.

Lists for £129. Read our review of the Fender Compugilist.

With its comprehensive set of controls, the Stella looks like it belongs in the cockpit of an F-16 fighter jet rather than on a pedalboard. This is the result of an ambitious effects maker trying to fit a VCA compressor into a pedal format – and succeeding. Regular control parameters like ratio, threshold, attack, release and gain aside, this little pedal has a few tricks up its sleeve that warrant the ‘Pro’ in its name.

These include a side chain filter with three selectable options – Normal, Low and Deep – and a Tilt EQ control. The former lets lower frequencies through without triggering the compressor too quickly, while the latter can be used to boost treble and cut bass or vice versa, around a pivot point that can be set to either 1kHz or 330Hz. With these features and a couple of others, this Romanian stomper presents an unrivalled amount of compression control in a pedal format. Learn more about it in our full review.

Lists for £223. Read our review of the Becos Comp IQ Pro Stella.

With the Keeley Aria, you get two of the brand’s most popular effects in one pedal: the Keeley compressor circuit and the Keeley Red Dirt Overdrive. Key to this pedal is the ability to tweak the signal chain of the effects. You can place the compressor before or after the overdrive, and even place another effect between the two via TRS insert cables. On the compressor side of things, the Aria has level, sustain and blend controls with a smaller rotary tone control for dialling in more brightness. Over on the overdrive side, it features level, drive and tone controls with a toggle switch for a high- or low-gain setting. Overall, the Aria is a pro-level compressor, combining two classy pedals in one with a useful order-flipping option.

Lists for £199. Read our review of the Keeley Aria.

To find out more about compression and how it works in a guitar setup, check out our guide on the effect here.