The Red Hot Chili Peppers have had several hot-shot guitar players in their long career, but none has been as influential as John Frusciante. Here, we take a look at his approach to fingerpicked chords. 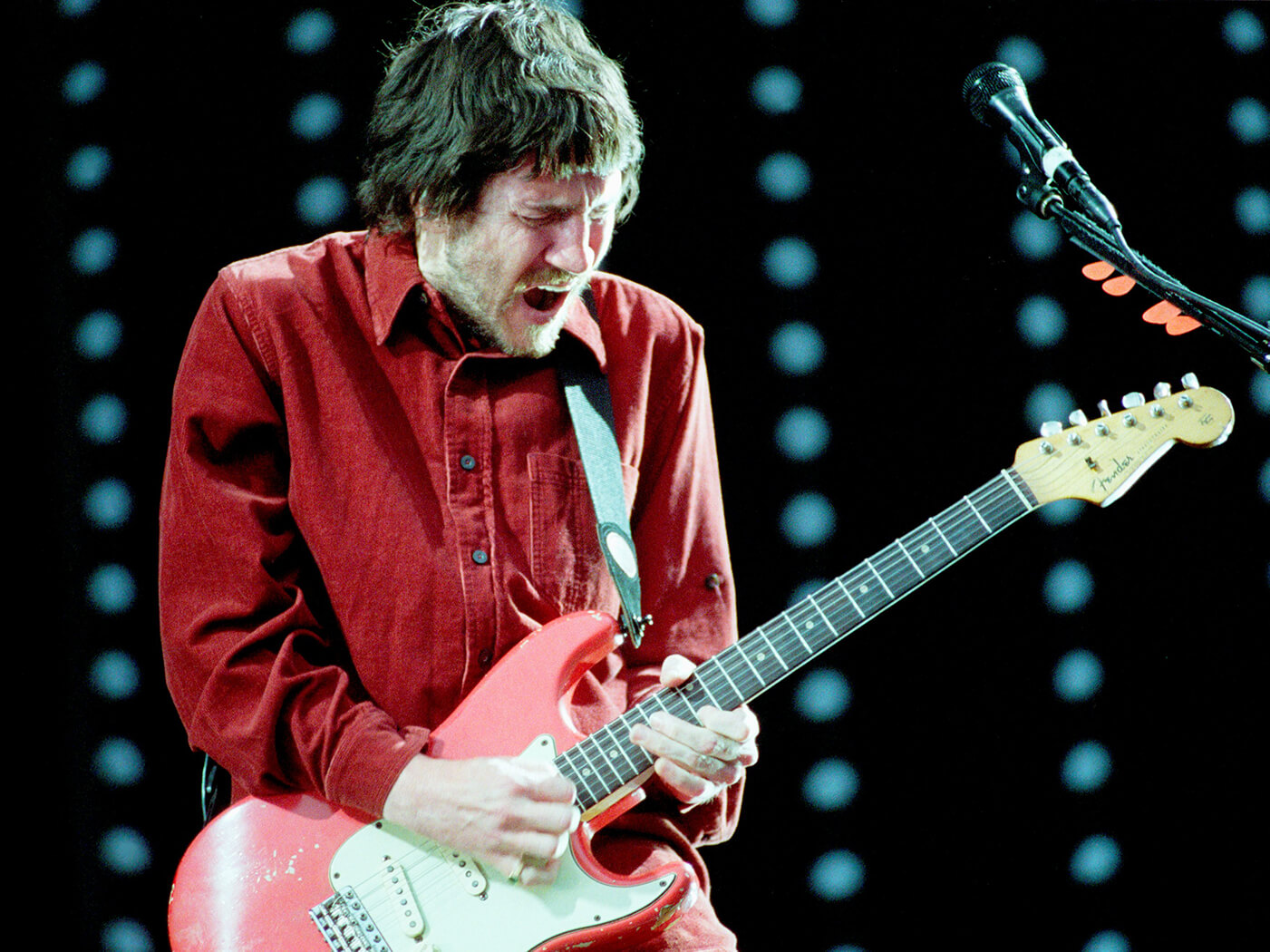 John Frusciante recorded five classic albums with the Red Hot Chili Peppers, along with 11 solo albums and many guest and production credits. In the first of a two-part examination of his playing, we begin by focusing on his use of fingerpicking.

Figure 1 introduces three chords, all of which are triads, consisting only of root note, major or minor third, and fifth. In the B augmented chord you might be surprised to see the open third (G) string described as ‘F double sharp’. The reason is that the fifth in a B major chord would be F♯, but a B augmented chord requires a sharpened fifth, hence the double sharp.

Begin by playing all three notes of each chord together, using your thumb to pick the lowest note and index and middle fingers to pick the high notes. Then, counting a fairly fast four to the bar, play the bass notes on each beat, fitting the top notes around them. The E minor chord should get two bars, with C and B augmented getting a bar each.

Frusciante’s playing is not always as complex as figure 1. In figure 2, simply play the four notes of the chord from low to high. Then repeat the last three notes to make a seven-note pattern and shift to the next chord. Alternate between F♯m and A three times and then hit the open E chord and let it ring. This is a good example of Frusciante’s ability to use simple chords and yet still come up with a memorable guitar part.

The chords in figure 3 are also intended to be played as arpeggios. Play the bass note first with your thumb, then use your ring, middle, and index fingers to play a descending arpeggio on the remaining notes of the chord. Notice how the slash chord, G/B, makes a smooth transition between the A minor and C major chords, and the tricky leap to the high G major chord adds a surprise to the chord sequence. This repeatable four-bar pattern will work as a B section to figure 1.

Figure 4 is played in a similar way, starting with the thumb but this time using middle and index fingers to play the remaining notes of the chord. In this case, the chord is not even a triad, as there are no fifths in any of these chords. They simply consist of a root, doubled at the octave and a major or minor third as appropriate. Once again, this is a repeatable four-chord sequence, which the Red Hot Chili Peppers seem expert at developing. Intelligent note selection from Frusciante again creates a memorable guitar part.

We have looked at Frusciante’s use of augmented chords and in figures 5 and 6, we take a look at his use of the other seldom-seen chord, the diminished seventh. In figure 5, there seem to be too many chords for a four-chord sequence, but the idea is to begin with the E minor, A, C and the first D chord. Play an arpeggio on each chord using the thumb, index, middle and ring fingers. On repeat, substitute the high-position D major chord for the one at the fifth fret. Then repeat the first pattern and fourth time through, go to the F sharp diminished chord instead of the D major chord. 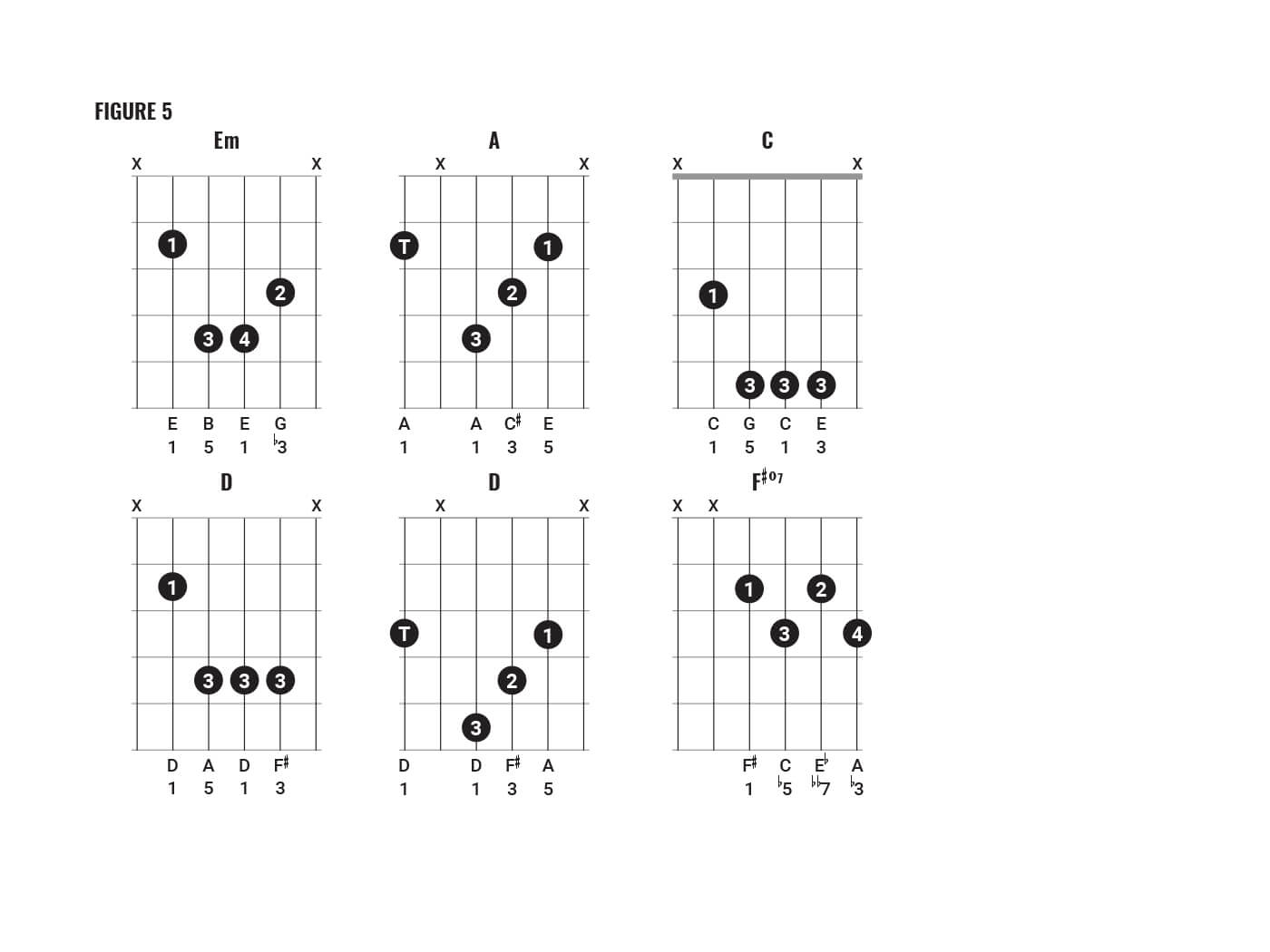 The idea here is to hold onto the arpeggio at the end of figure 5 for a couple of bars and then play all five diminished seventh shapes from the highest to lowest, stretching them out over two bars. This eruption of diminished sevenths can lead smoothly back to figure 1 and the E minor chord where we came in.