In the first of a series looking at the chord shapes and sequences used by the Beatles, we get inside the head of John Lennon and find a solid rhythm guitarist with an ear for original chord changes.

It’s impossible to overstate the impact that the Beatles had on the course of pretty much all the popular music that has come after them, and the root of this paradigm-shifting genius was the fact that they were a band chock full of wonderfully talented and original songwriters.

In addition to being wonderful writers, John Lennon, Paul McCartney and George Harrison were also gifted and inventive guitar players, whose varied approaches to the instrument can be heard all over the band’s peerless catalogue and on into their respective pots-Beatles works.

We’re going to kick off our examination of these three remarkable musicians by examining the style and chordal approach of John Lennon. In what would have been his 80th year it’s fascinating to look at the way he approached his guitar parts on those early Beatles records, both the ones he’d taken the lead on, and the McCartney-penned numbers that he contributed to in the studio. Have fun with these chords and we’ll be back with more John Lennon-inspired harmony next month.

Although capable of both skill and sophistication in his guitar playing, Lennon was often happy to strum open-string chords on his Gibson J-160E. Here we have three chords of the kind that any beginner can get their hands around. Try playing G and E minor followed by two bars of D for a four-bar structure, or four bars of G and E minor and then back and forth between G and D to make eight bars. The Beatles did not necessarily use exotic chords, but they did have a knack for using commonplace chords in interesting structures. 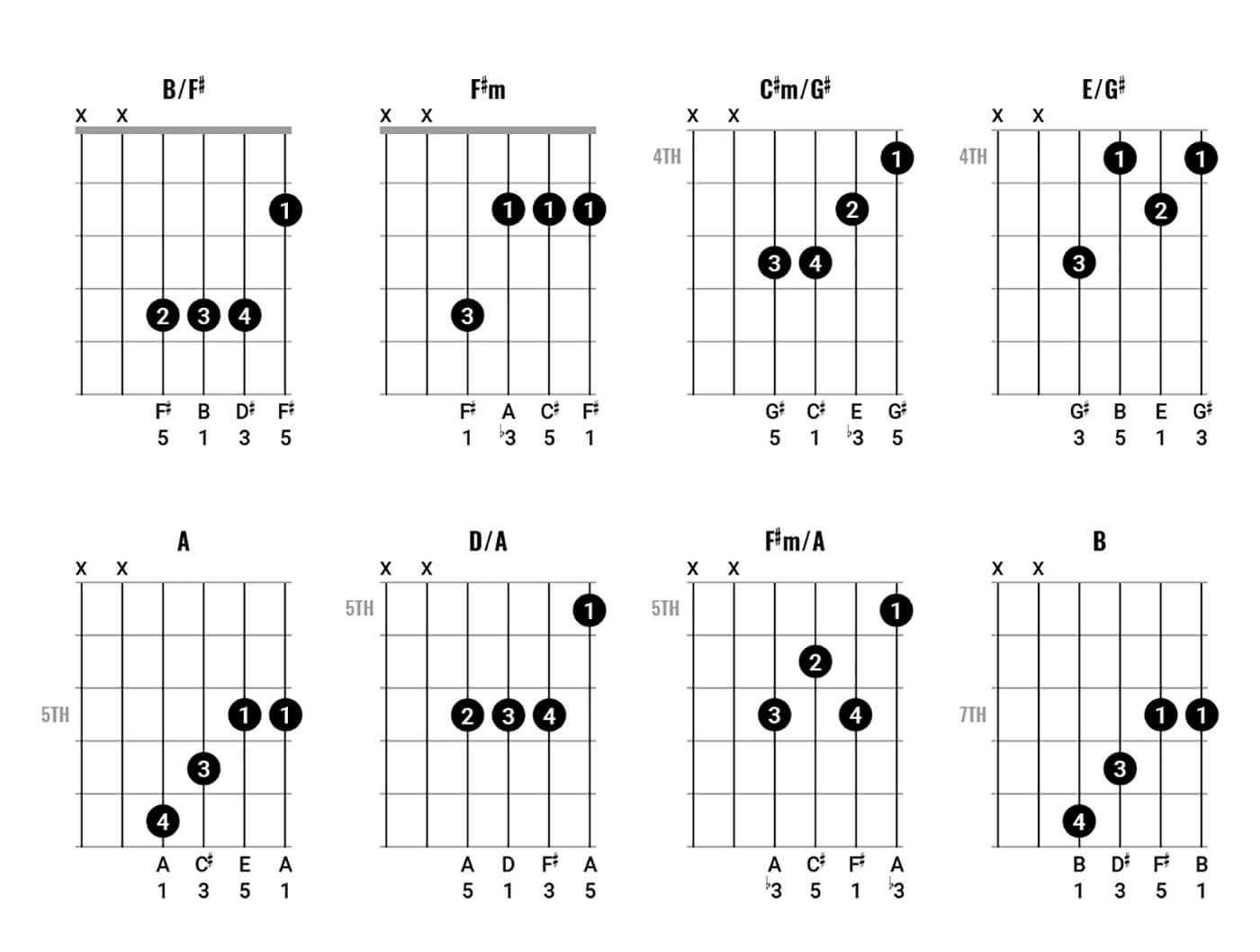 Here we are in inspired by a rhythm guitar part that Lennon put together to play over a song that is usually credited to McCartney.

Counting in a fairly fast four to the bar, play down, up, down strums, three to a beat in a ‘triplet’ feel. It’s not easy and John was justifiably proud of coming up with this guitar part. We are using four-note chords because in an interview Lennon once described how he first learned to play on his mother’s banjo. If you stick to four strings you end up using some interesting inversions, and you can have some fun reordering these chords into different eight-bar phrases.

When rock ‘n’ roll arrived in the 1950s it didn’t wipe out the style of pop music that had been before, and the Beatles were used to listening to that style and hearing the extended chords that were a hangover from the jazz age. Here we’re inspired by a simple four-bar chorus, which settles on a different F major voicing when repeated. Minor chords with major sevenths are not exactly commonplace in rock and pop music. 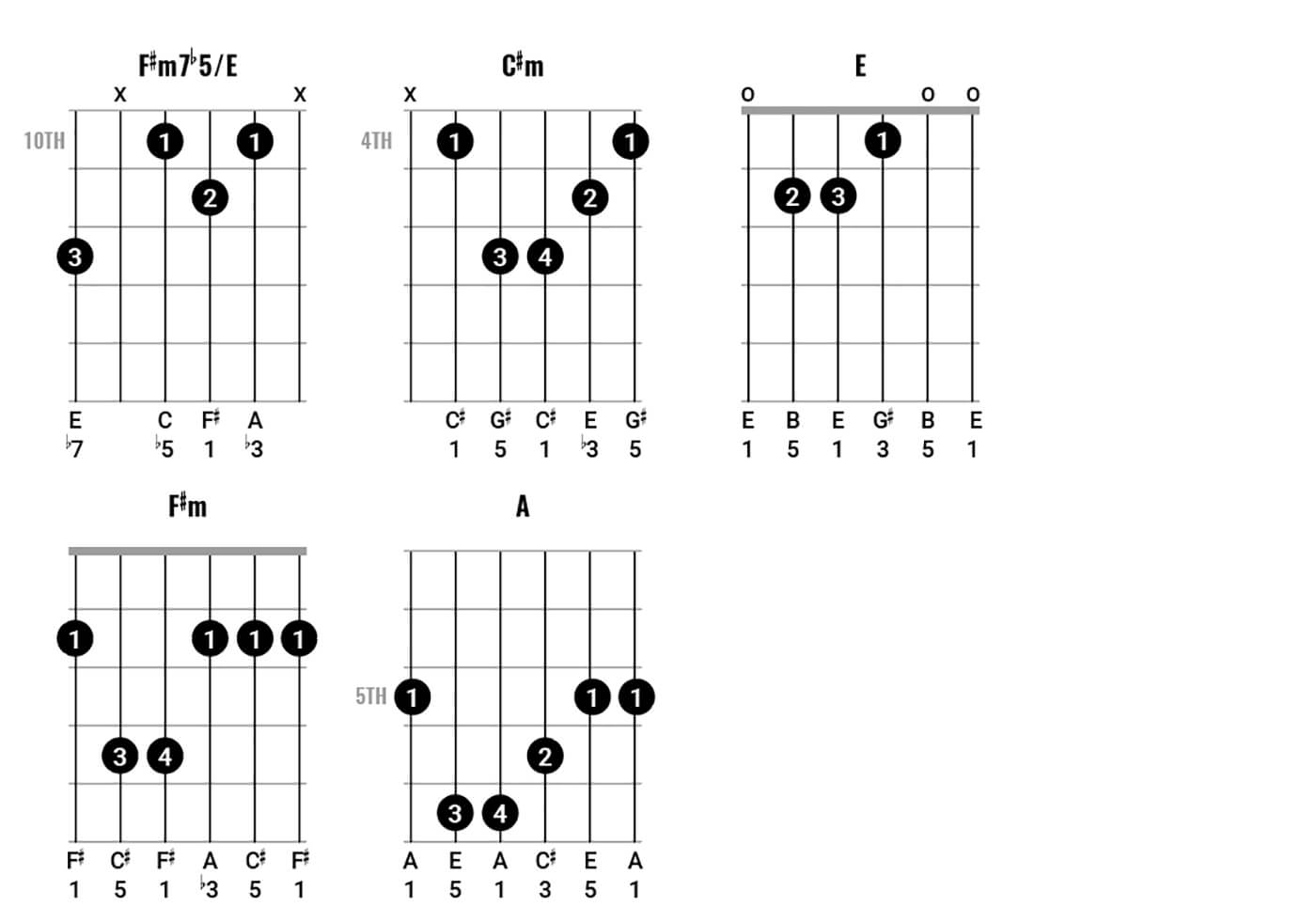 Whether it be the opening chord of A Hard Day’s Night or the final chord of A Day in the Life there is plenty of online discussion about what exactly the Beatles played at various points in their songs. Here we are inspired by a Lennon composition where the opening F♯m7♭5 with E bass chord seems to have little to do with the chunky strummed chords in the verse that follows it.

Also, you might be surprised that after going around the sequence a few times it ends on E. As in figure 1, eight-bar phrases are also available, so experiment, and see what you come up with. Returning to the first chord, here is some music theory before we bring things to a close: F♯m7♭5 is F♯, A, C, E. So the first chord in figure 4 is in third inversion, with the seventh in the bass.

Rod Fogg is a London-based guitarist, teacher and writer. He is the author of The Ultimate Guitar Course (Race Point 2014), the Electric Guitar Handbook (Backbeat, 2009) and contributed to bestseller The Totally Interactive Guitar Bible (Jawbone Publishing, 2006). Find out more at rodfogg.com.