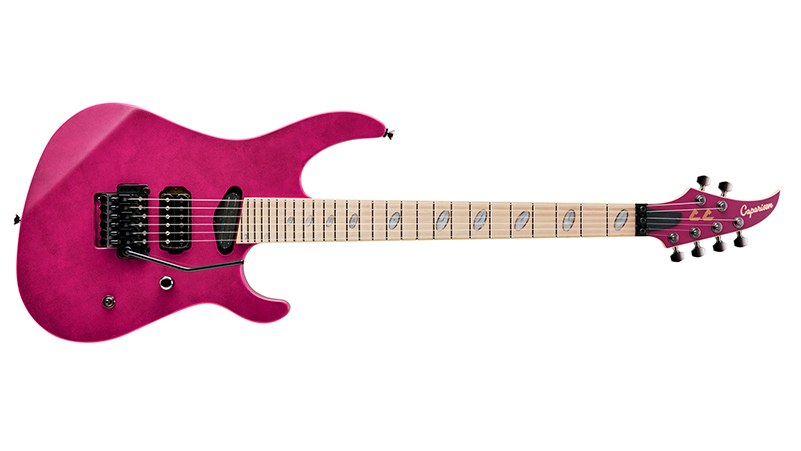 Caparison Guitars has just dropped a signature guitar for Courtney Cox, guitarist of The Iron Maidens. The Horus-M3 CC is a shred-friendly axe that boasts designs based on the brand’s popular Horus-M3 model, but with enhancements to fret access and tonal response.

The CC features a five-piece maple and walnut neck that boasts a deeper neck-joint heel cut, allowing for unhindered access to all 27 frets. The Schaller S-FRT II tremolo system that came installed on the original Horus-M3 has been upgraded with brass blocks, noiseless springs, saddle screws and string blocks to yield an extra dimension of warmth and clarity, according to Caparison.

Specs-wise, this guitar has much in common with its predecessor: A flat 13.75- to 15.75-inch compound fretboard radius, 24.75-inch scale length and 27 jumbo frets are some of the features shared by both six-strings. Both guitars also come with Caparison’s SH-27F mini-humbucker at the neck and PH-bc humbucker at the bridge.

“As a guitarist, I have searched for and have found an instrument that brings out the best in my passion for music. That guitar is the Caparison Horus-M3 CC,” said Cox. “From its full in-your-face tone that cuts through any stage to its fast five-piece neck, I am confident [to say] that this hand-crafted masterpiece is the best guitar I have ever played, hands down.”

For more information, check out caparisonguitars.com.