Get the low-down on the brand’s new ‘Inspired by Gibson’ collections.

At NAMM, we took a look at Epiphone’s massive new line-up for 2020 and now, full details on the ‘Inspired By Gibson’ collection have been revealed.

The fact that Gibson has embarked on a huge overhaul of its Epiphone brand has been hammered home plenty of times over the past few weeks. A key highlight of the new guitars is the larger, open-book headstock for the brand’s Gibson-derived Les Paul and SG models. But the new guitars also offer improved electronics, new finishes and more.

Here’s a rundown of 28 of Epiphone’s latest offerings:

Epiphone has brought back the beloved ES-335 “Dot”. It features a laminated maple body with a 1960s SlimTaper D-shape mahogany neck. Hardware includes a LockTone Tune-o-matic bridge with a stopbar tailpiece and Grover tuning machines. Tone is provided by two humbuckers: an Alnico Classic Humbucker (neck) and Alnico Classic Plus Humbucker (bridge). Pickups are managed by individual volume and tone knobs and a three-way toggle switch.

Available in Cherry and Vintage Sunburst. Lists for $449. 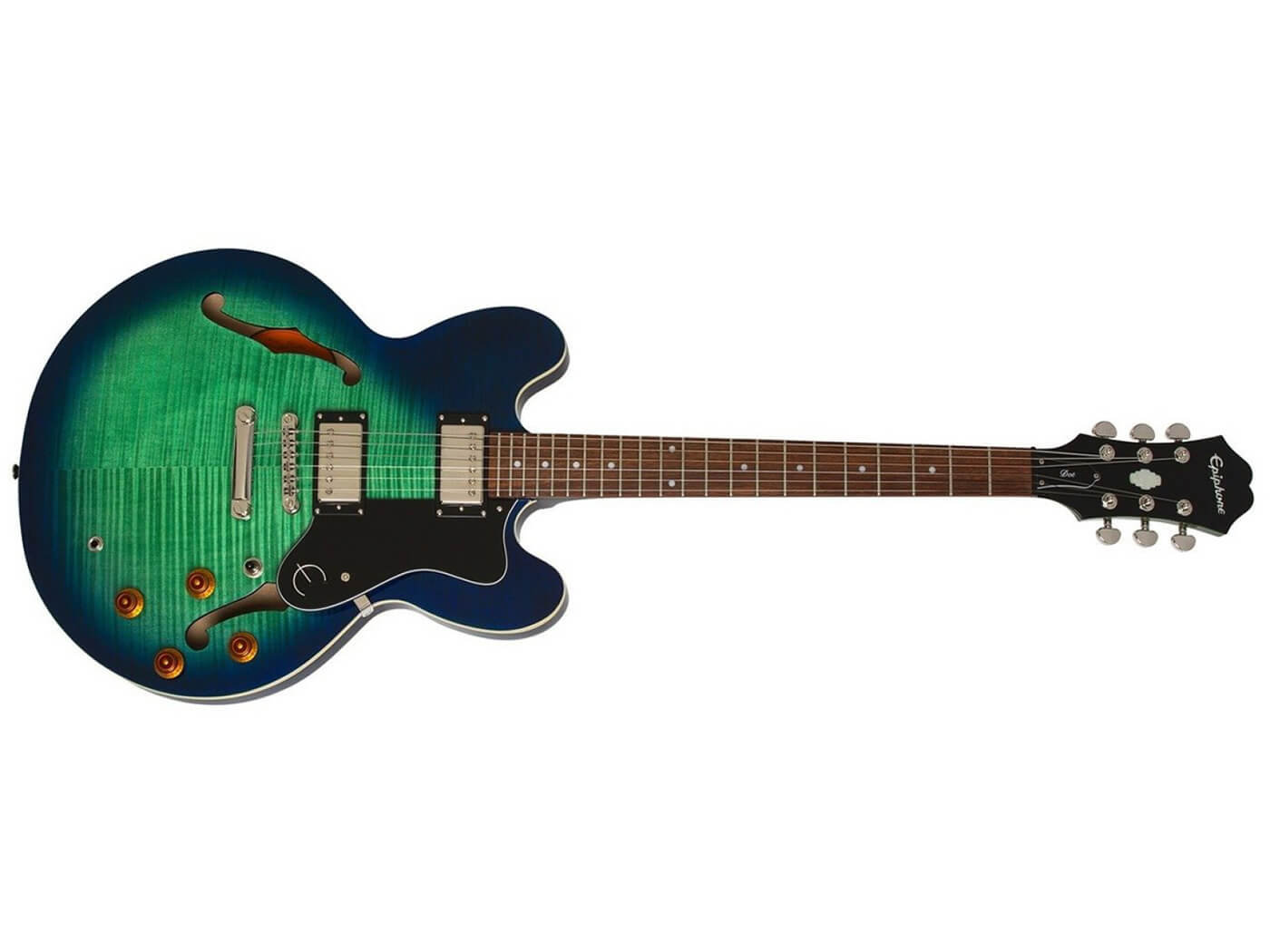 The Dot Deluxe is a limited-edition guitar with flame maple veneer body and top, with a solid mahogany neck with a SlimTaper D profile. Other highlights include a pair of Alnico Classic humbuckers and Grover Rotomatic tuners.

Available in Aquamarine and Blueburst. Lists for $499. 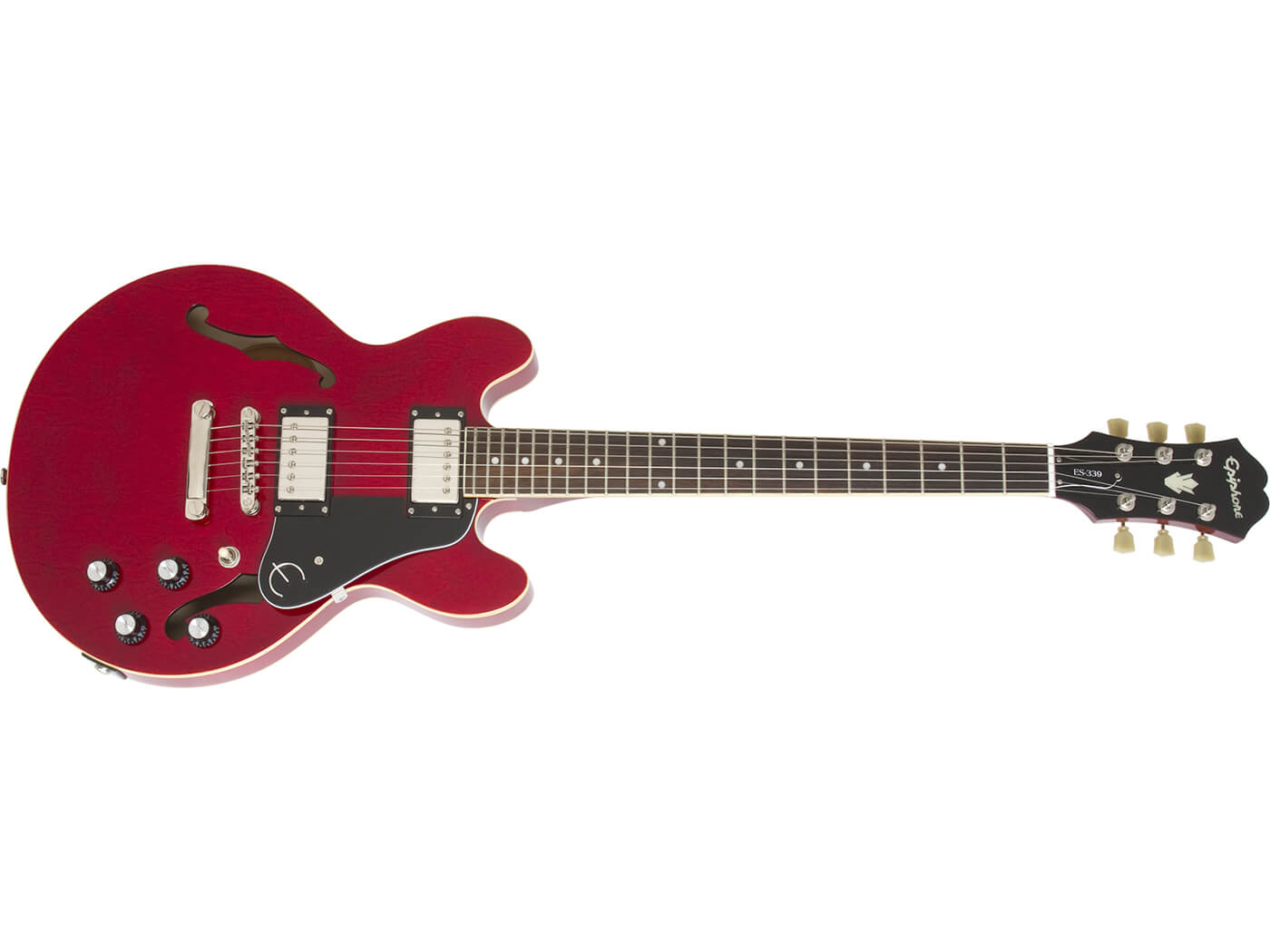 Similar to the ES-335 but with a reduced body size, the ES-339 PRO features a laminated maple body with a solid center block. Features of this guitar include a 1960s SlimTaper D-shape mahogany neck and a pair of Epiphone Alnico Classic PRO humbuckers.

Available in Cherry, Pelham Blue and Vintage Sunburst. Lists for $499. 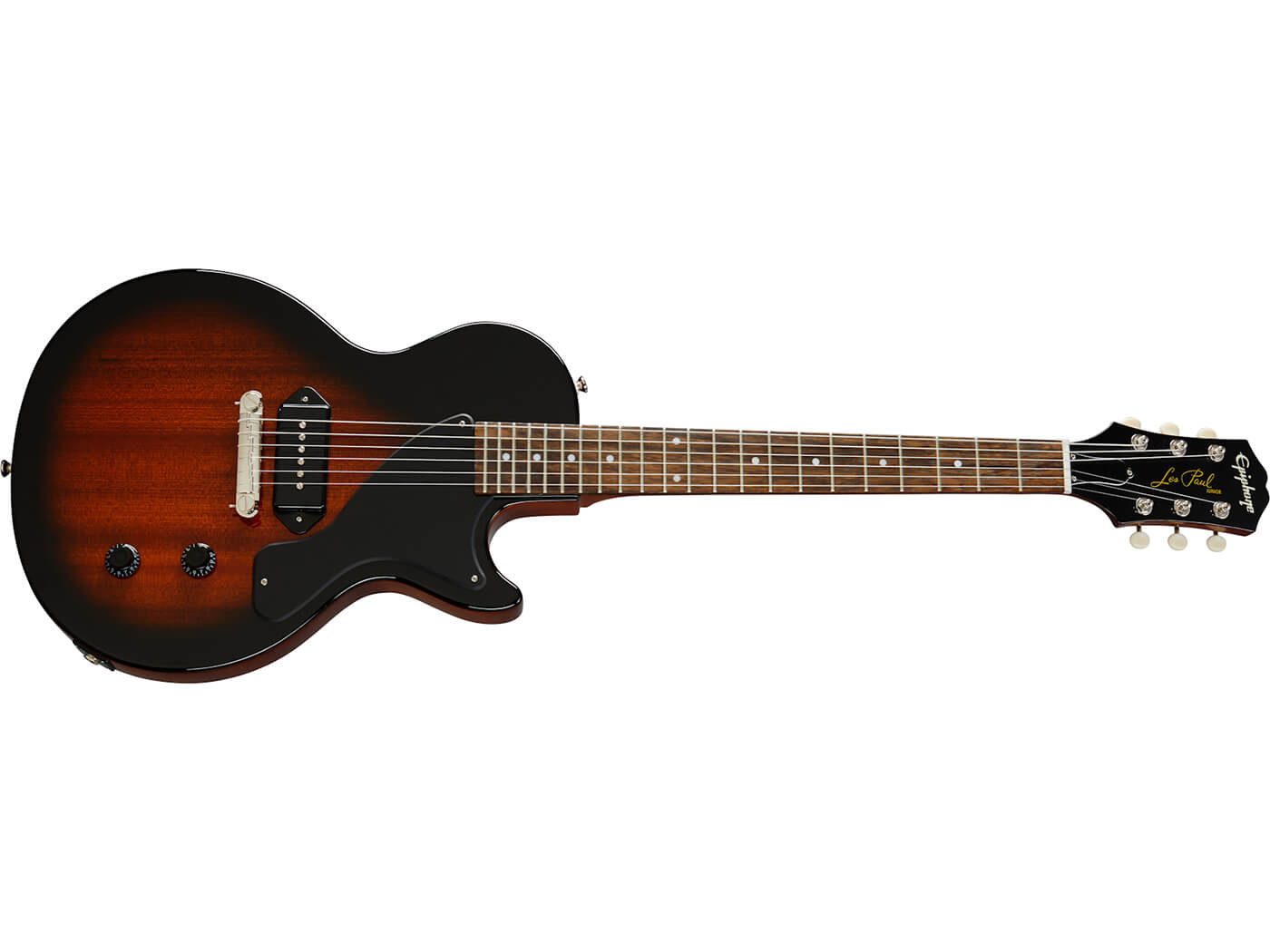 The Les Paul Junior kicks it old-school with the single P-90 Dogear pup configuration. It has a mahogany body and neck, the latter of which features a Vintage 50s profile. Other features include Epiphone Deluxe Vintage tuners and Lightning Bar wraparound bridge.

Available in Tobacco Burst. Lists for $379. 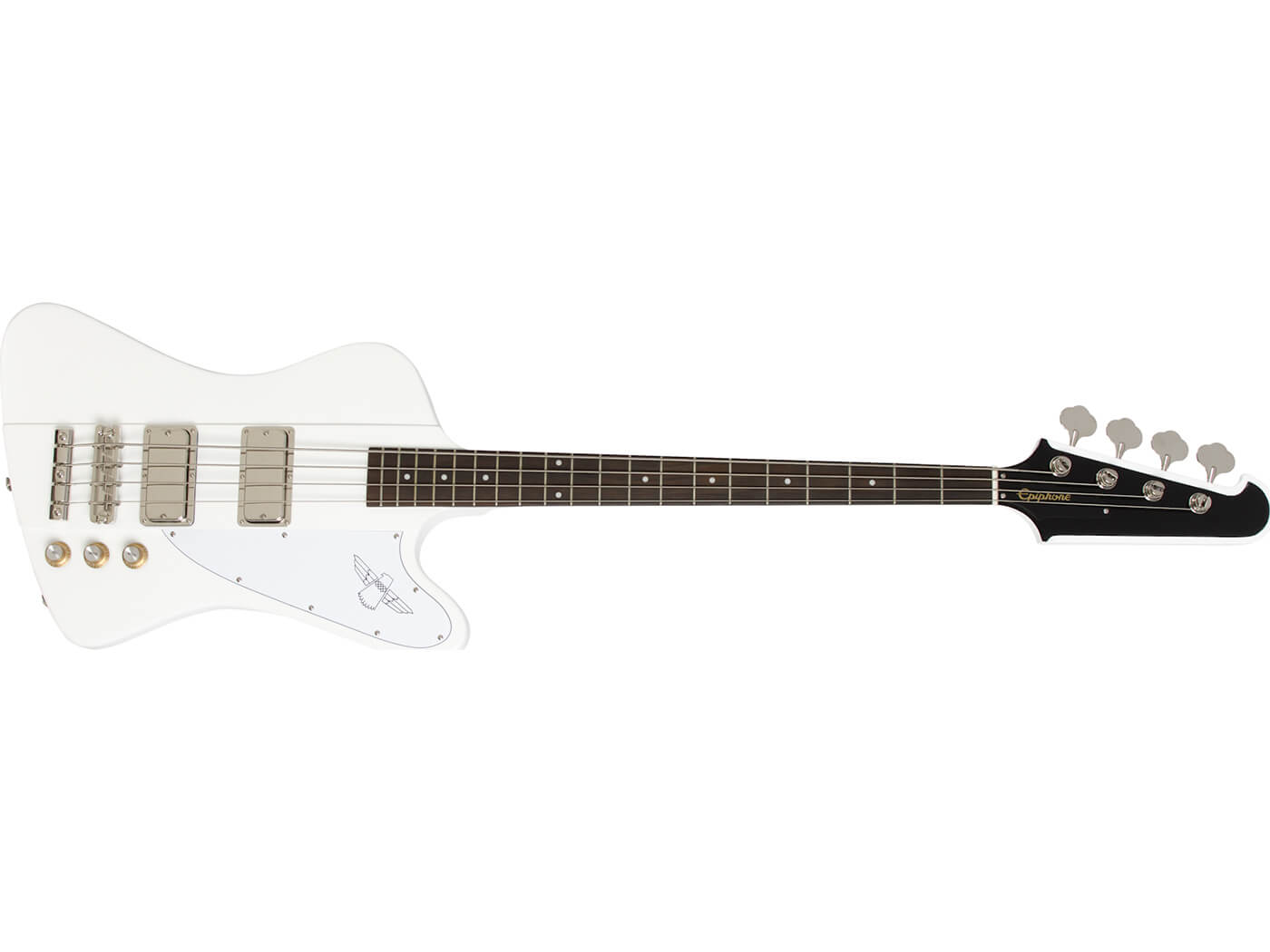 The 1963 classic favoured by The Who, Lynyrd Skynyrd, Cheap Trick and more is back. Highlights of this bass include new ProBucker Bass humbuckers and a vintage leaning 60s Thunderbird Tune-o-matic bridge and Claw tailpiece.

Available in Alpine White, Ebony and Vintage Sunburst. Lists for $699. 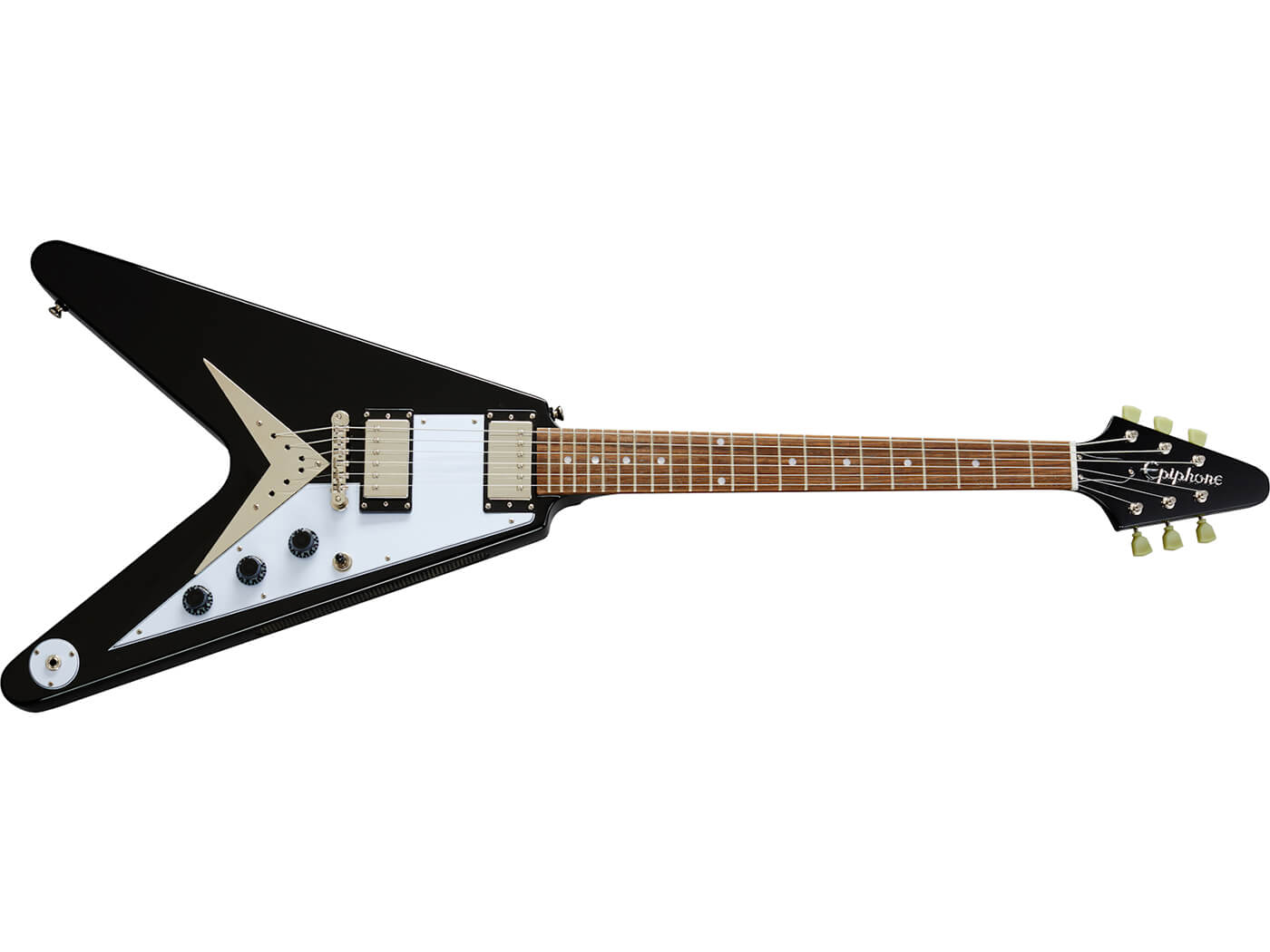 This guitar harks back to the 1958 flying V design – hence the smaller pickguard and pickup rings. It comes loaded with CTS pots, ProBucker pickups and Vintage Deluxe tuners. Notably, this guitar has a string-thru plate, as opposed to a two-piece Tune-o-matic. 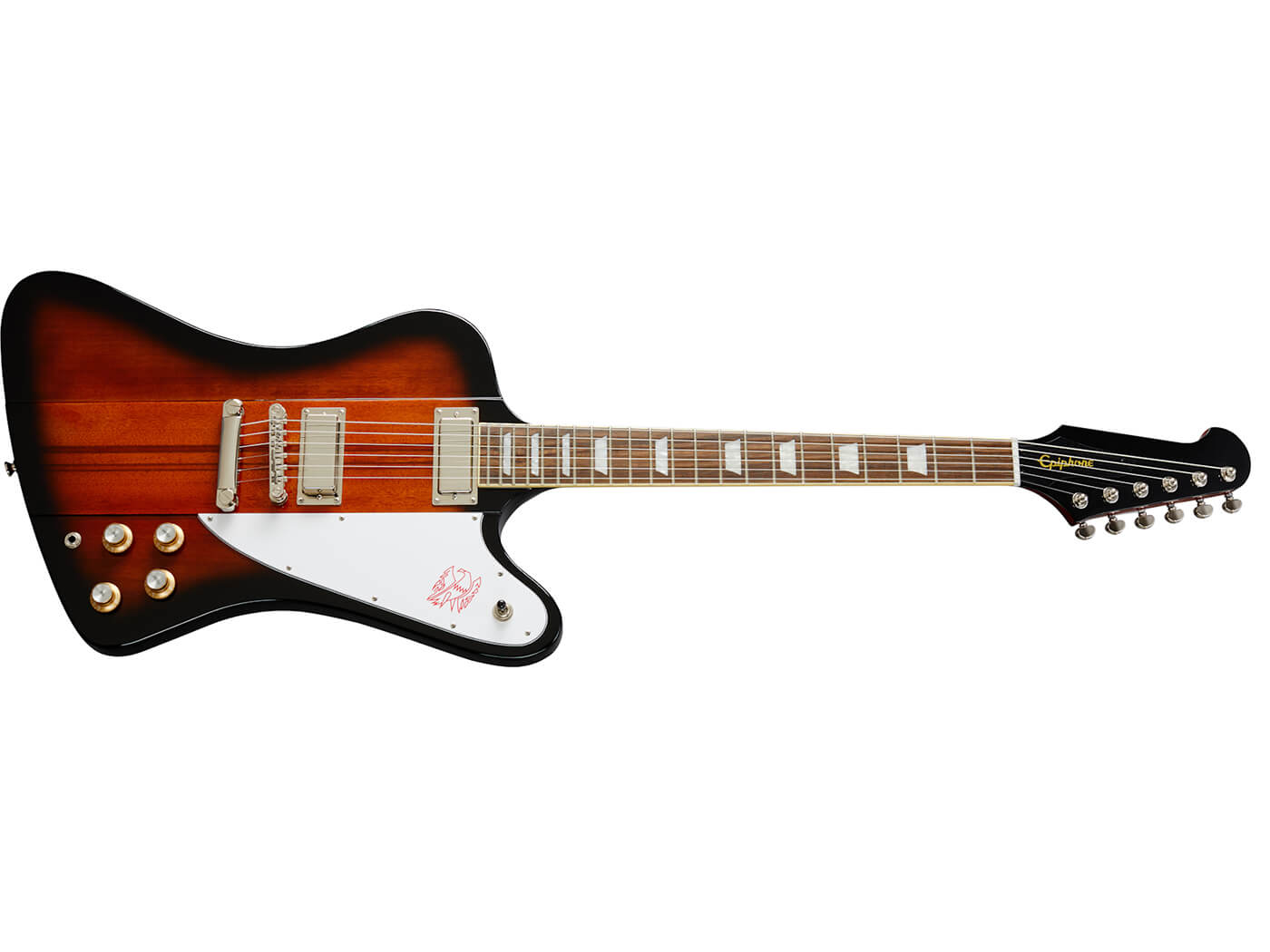 Recreates the classic ‘63 Firebird design, with a mahogany body, 18:1 mini grover tuners, gold hardware and ProBucker mini humbuckers. The neck also features a cream binding, and the headstock is the original reversed shape with an Epiphone-branded truss rod cover.

Available in Vintage Sunburst. Lists for $599. 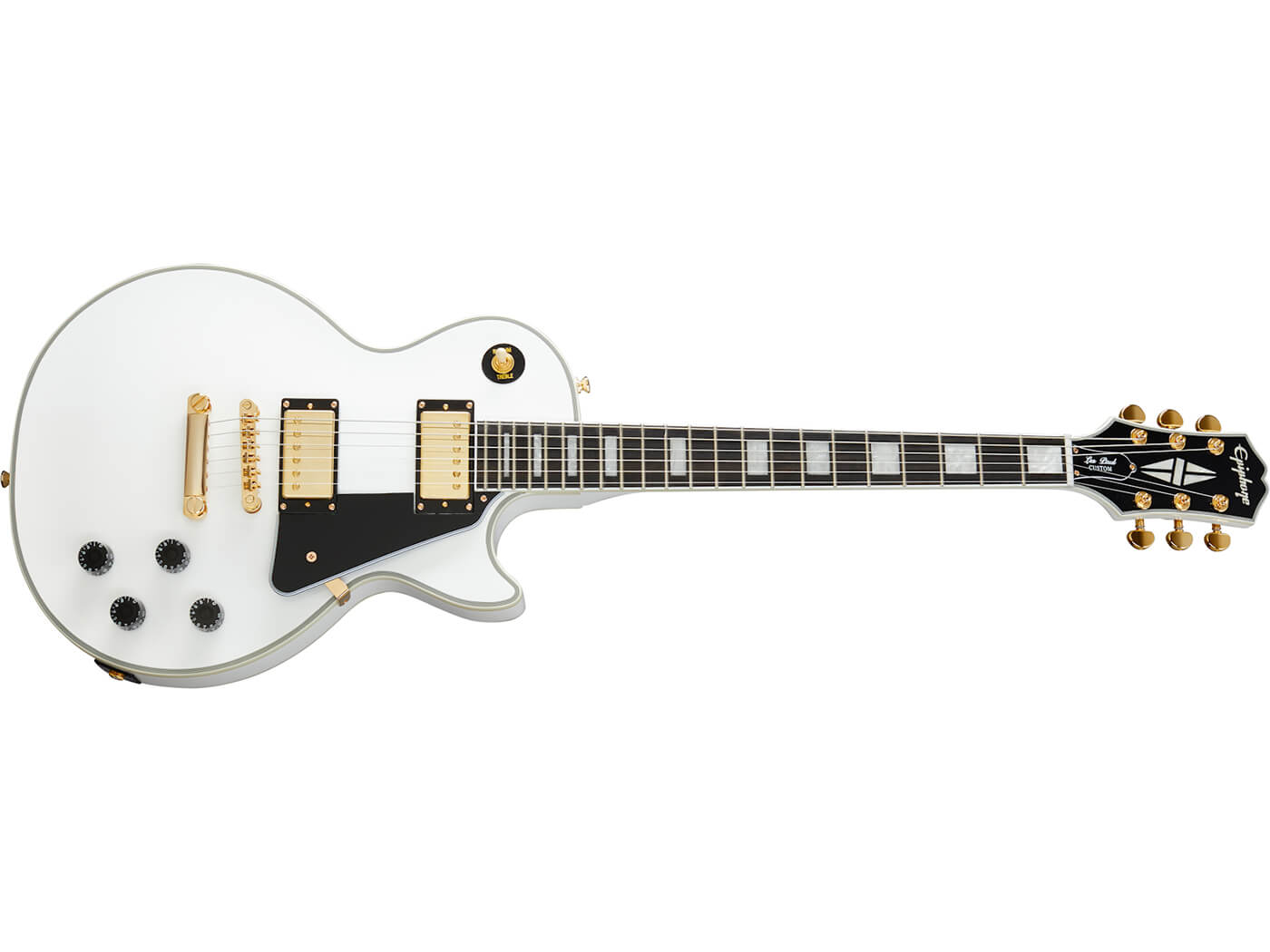 This guitar is based on Les Paul’s own ‘54 ‘tuxedo’ LP custom, recreating the headstock and fretboard inlays. It comes with PAF-style ProBuckers, gold hardware, Grover tuners, and bound mahogany construction.

Available in Alpine White and Ebony. Lists for $599. 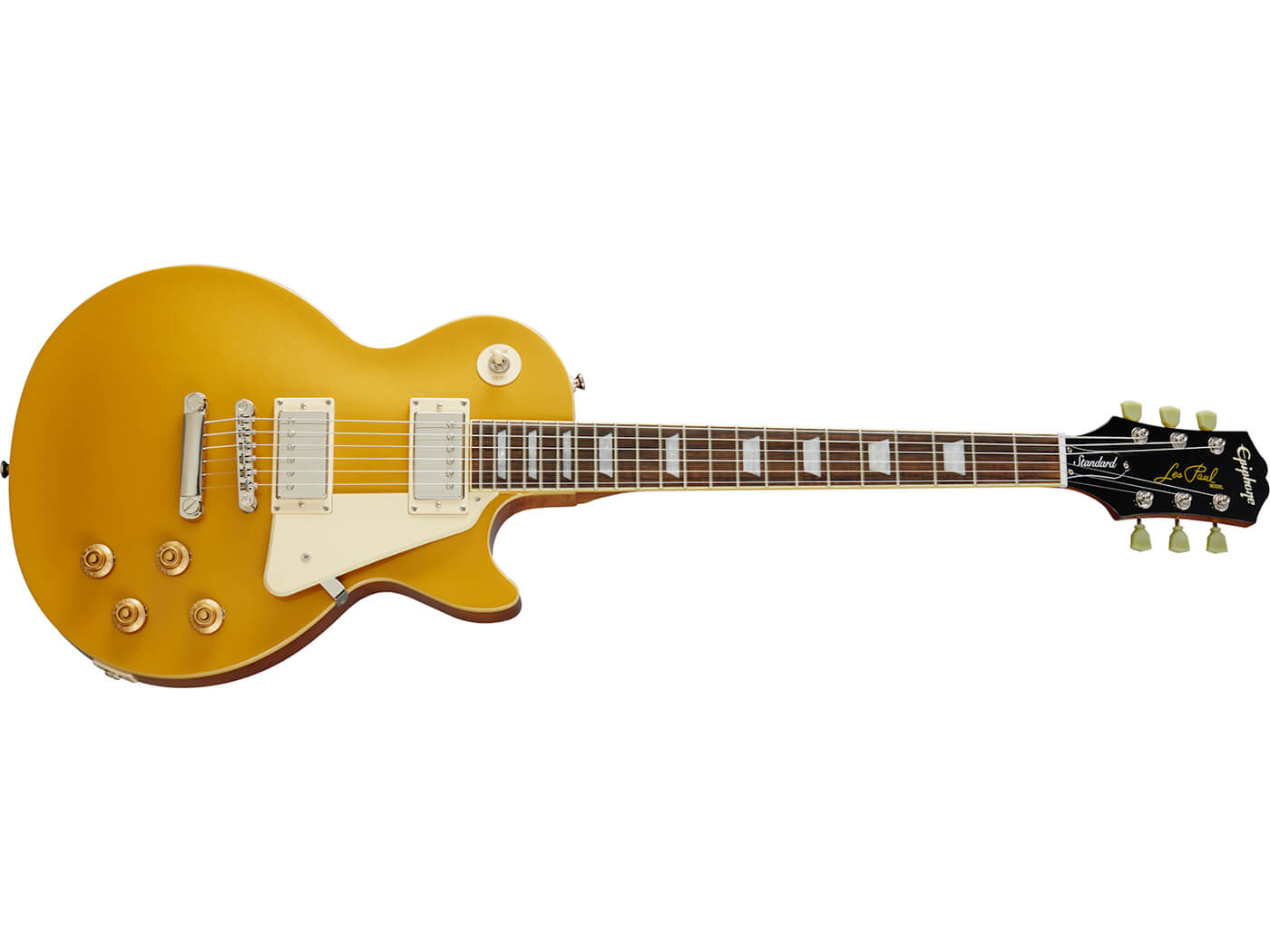 This ‘50s Les Paul sports all of the trimmings you’d expect from the classic single-cut, including a Mahogany body with a maple cap, and a long-tenon mahogany neck. The CTS pts are wired ‘50s style as well, and the available finishes certainly harken back to the early era of solid-body guitars. 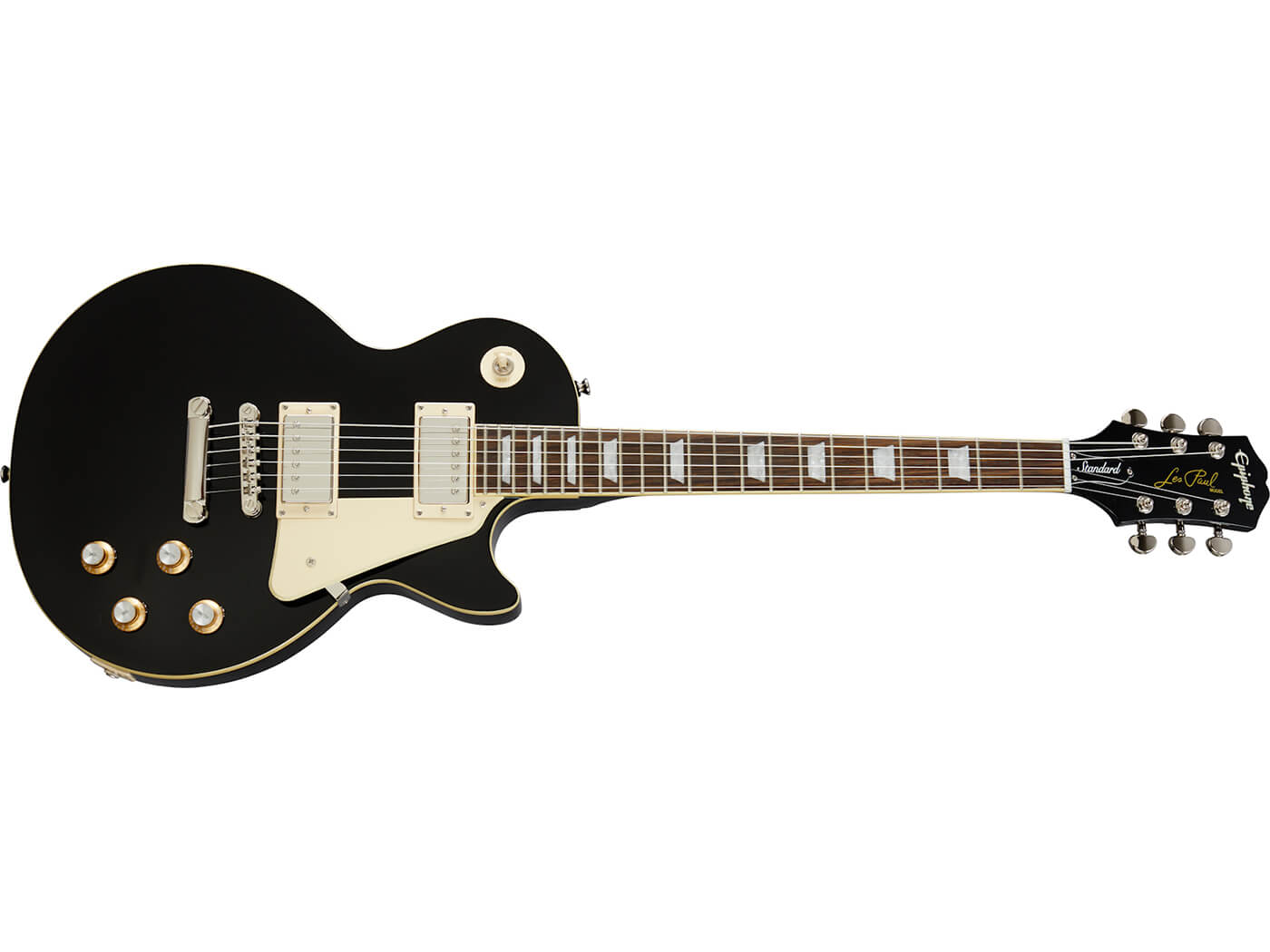 With many of the same appointments as the ‘50s equivalent, except with chrome rather than gold hardware and an ebony finish option over the gold top.

Available in Ebony, Bourbon Burst and Iced Tea. Lists for $599. 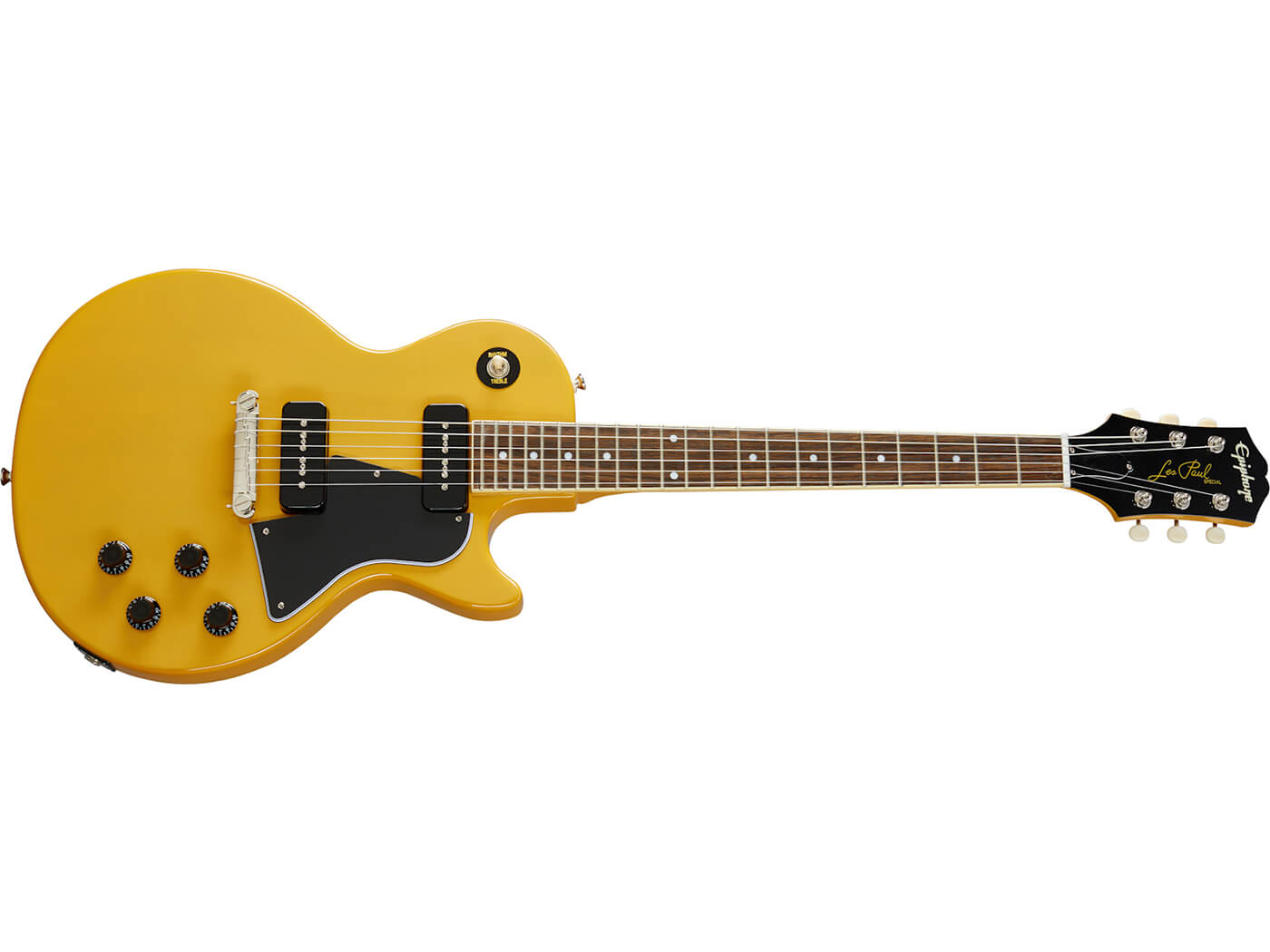 For those who would rather something a bit more stripped-back, the Les Paul Special offers a slab mahogany body finished in TV yellow, loaded with two P90 pickups. Like the Junior, the neck sports a Vintage 50s profile and dot inlays. 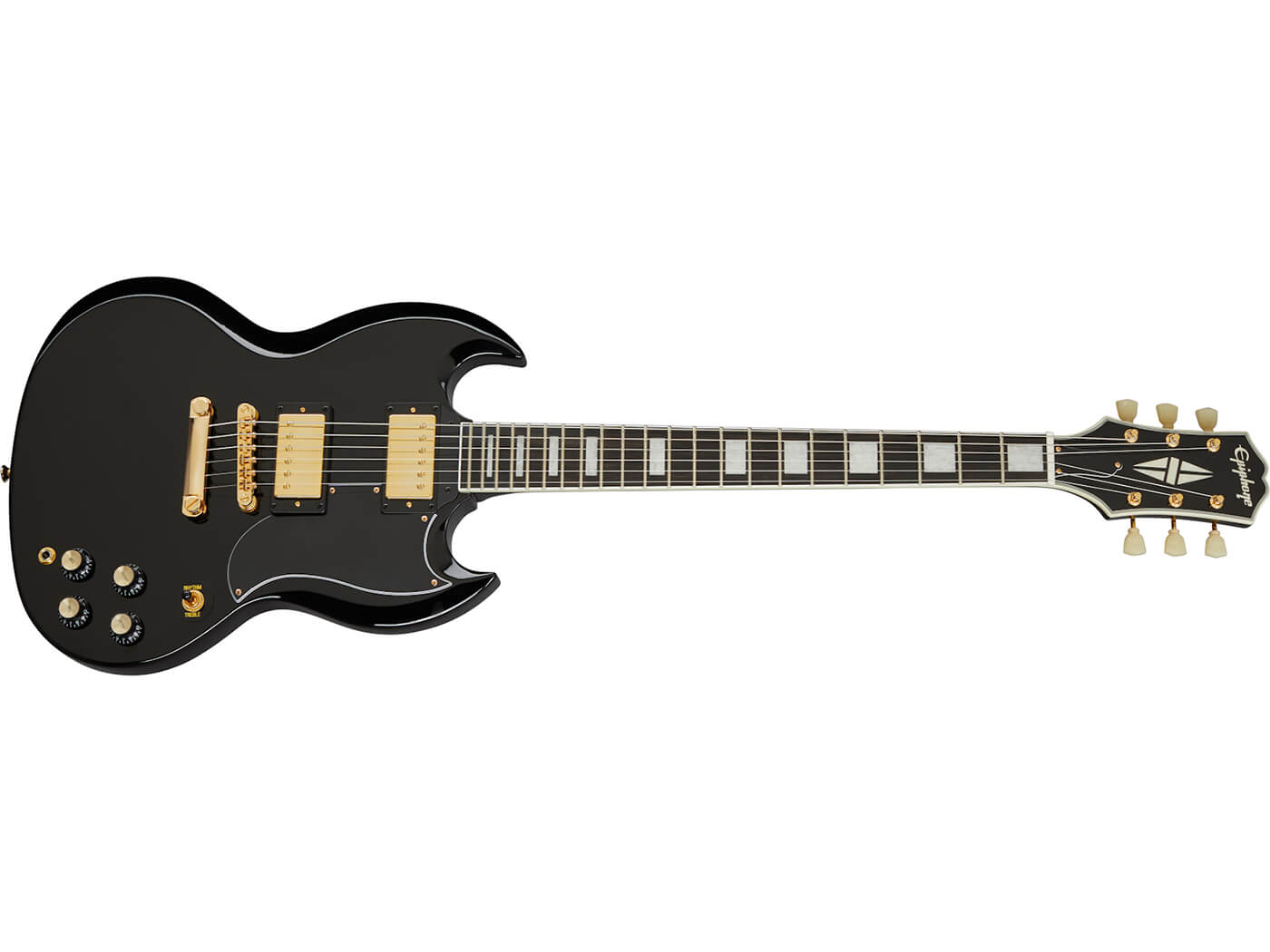 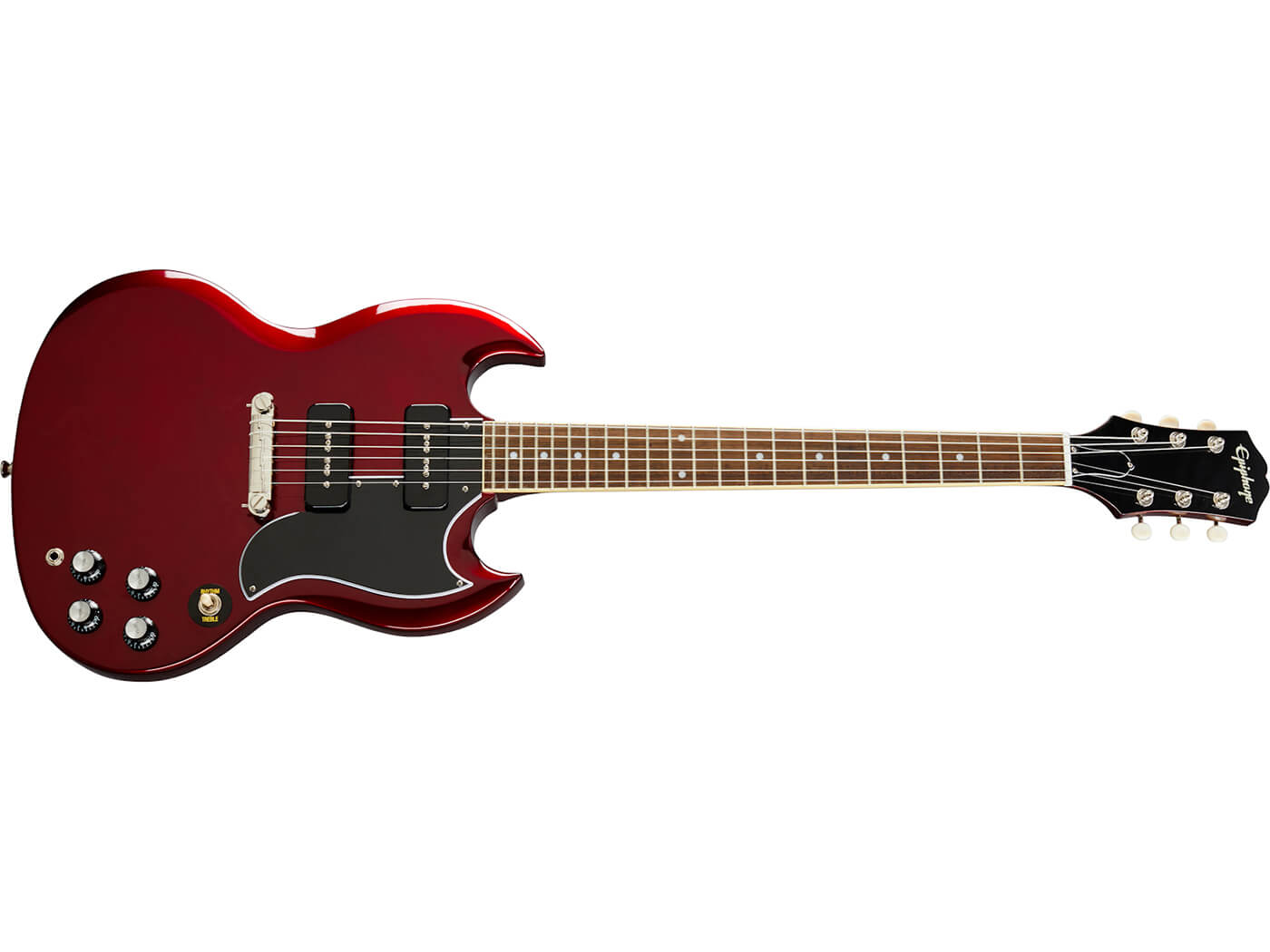 For a more stripped-back version of the SG, this special echoes the change from the Les Paul Custom to the Les Paul Special, with two P90 pickups, an unbound headstock, and a flat-coloured finish.

Available in Sparkling Burgundy or Faded Pelham Blue. Lists for $399. 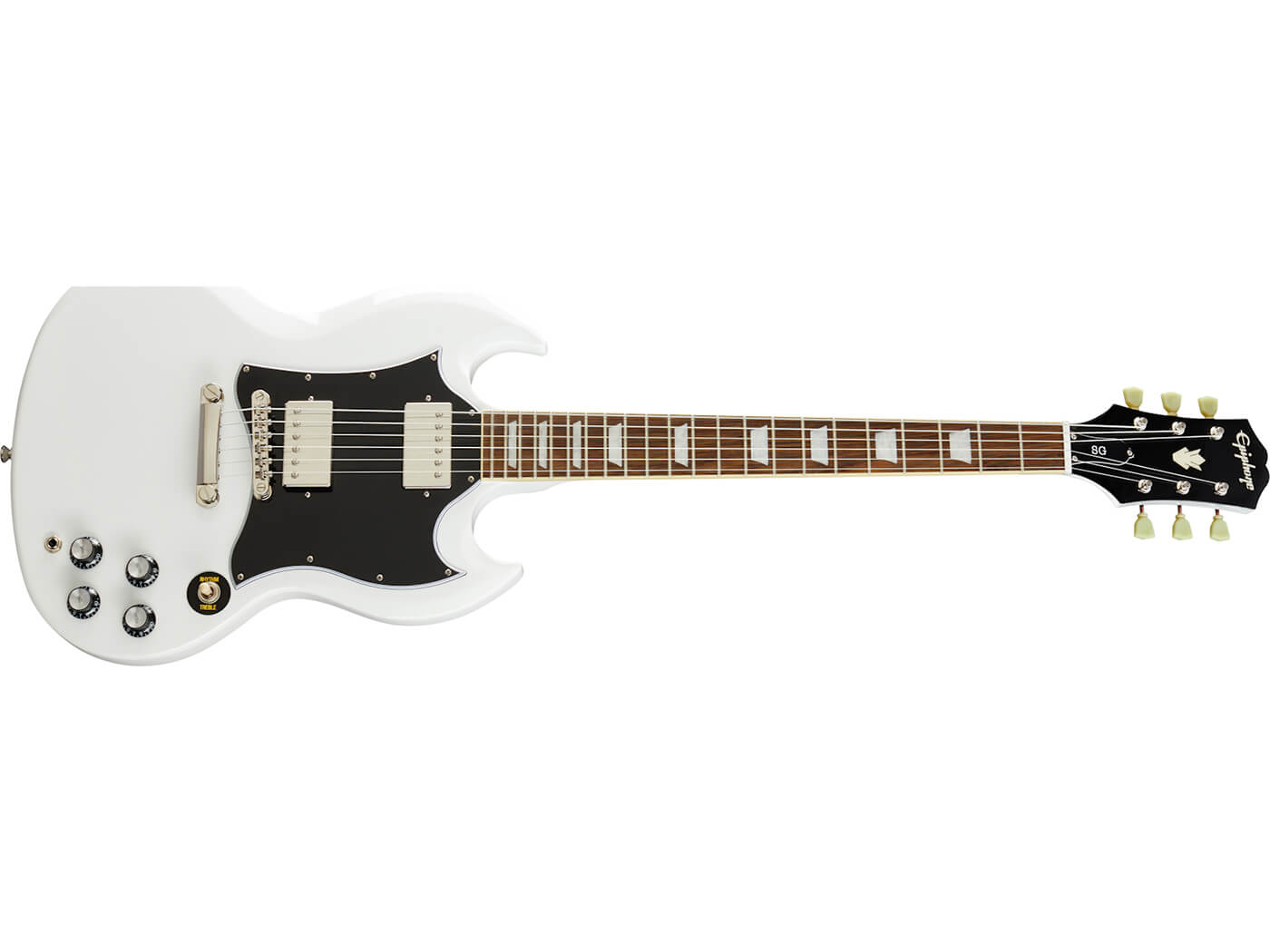 Fitted with two Alnico Classic PRO humbuckers mounted in a ‘batwing’ pickguard, this SG lets you unleash your early-Black Sabbath influence. A 60s SlimTaper neck and full access to all 22 frets means this guitar is a fast-playing classic rock workhorse.

Available in Alpine White, Ebony or Heritage Cherry. Lists for $449. 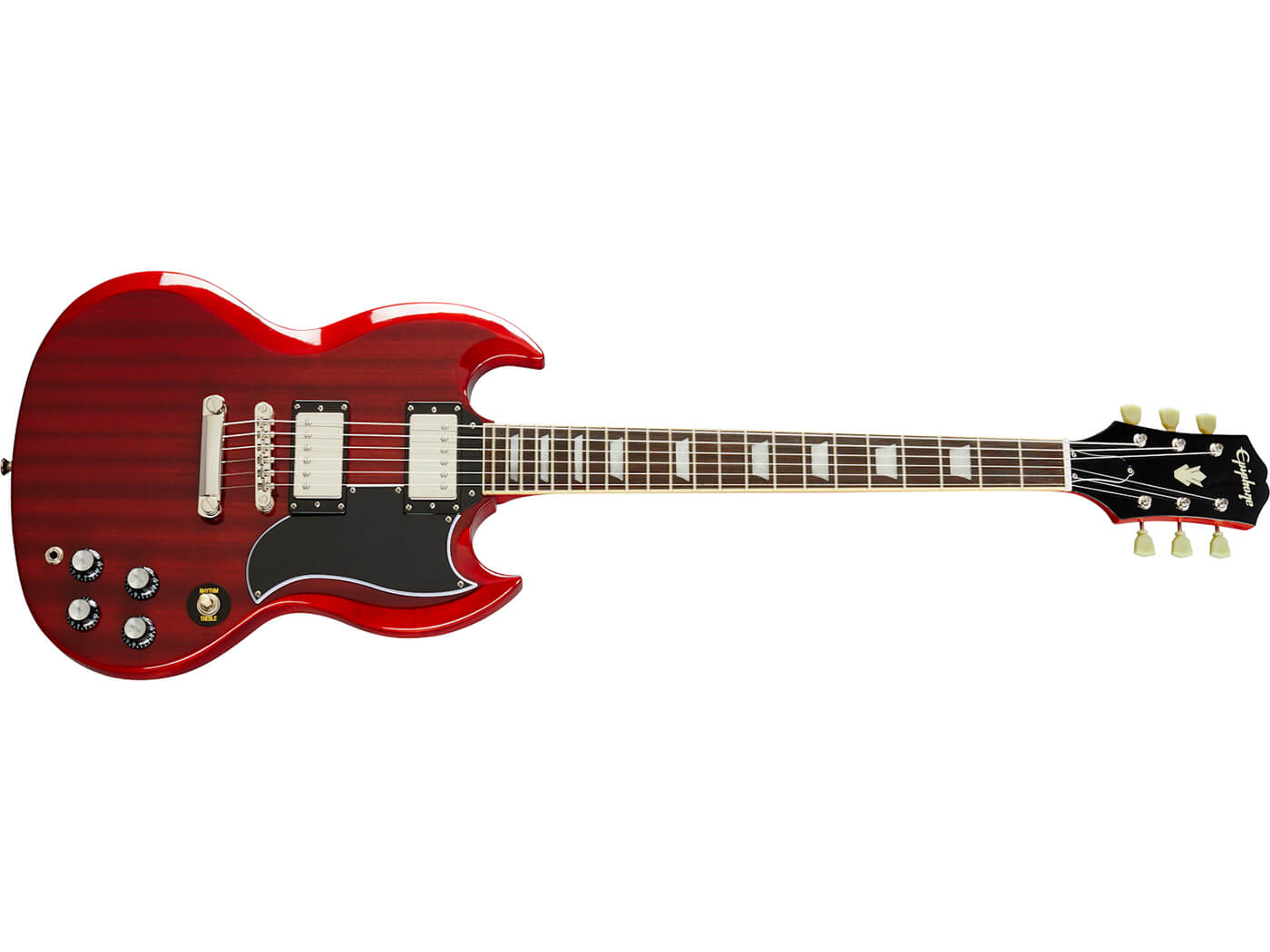 Available in Heritage Cherry. Lists for $449. 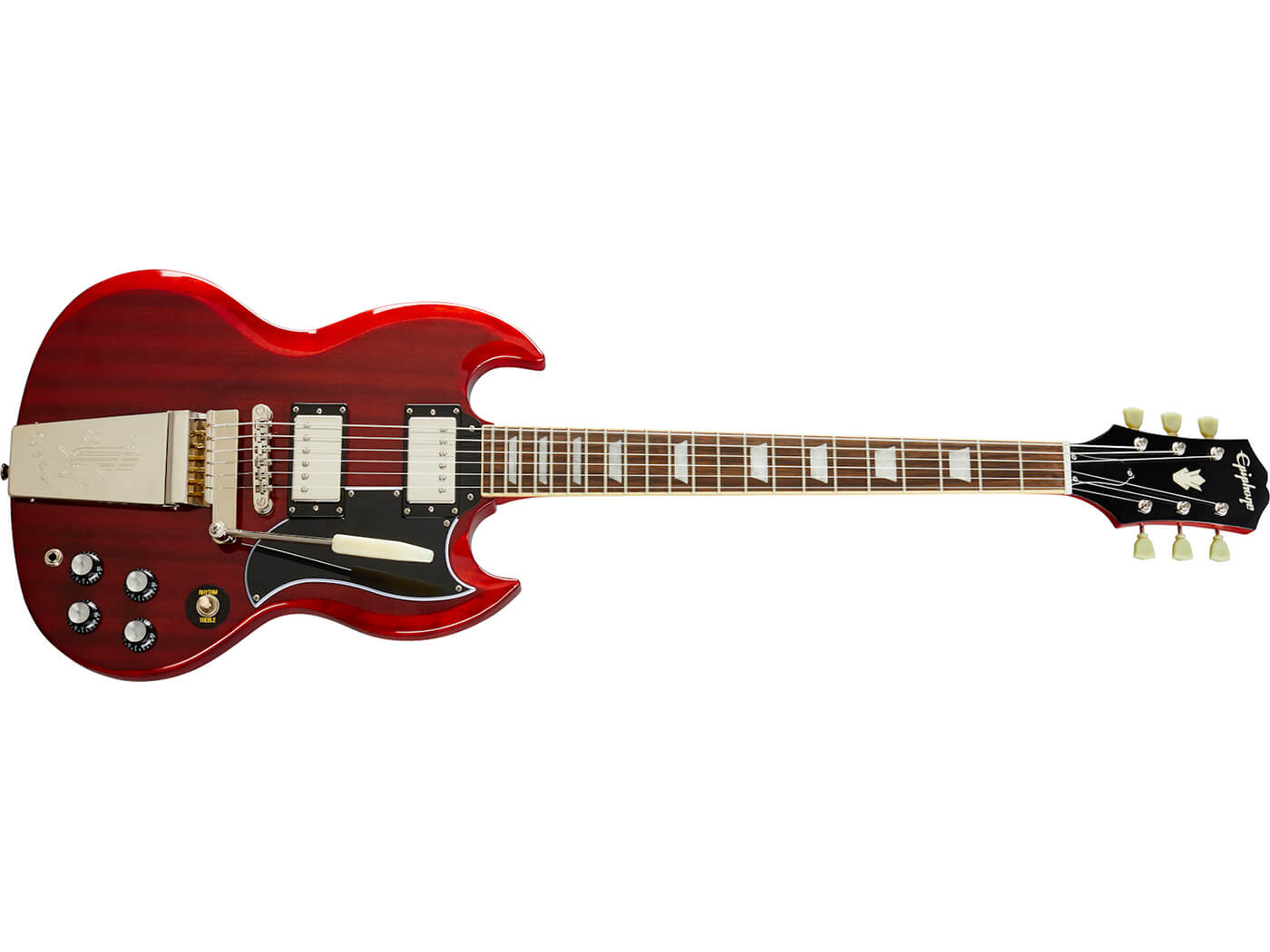 As above, except fitted with a 60s-style Maestro Vibrola bridge for subtle, vintage-styled modulation.

Available in Heritage Cherry. Lists for $449. 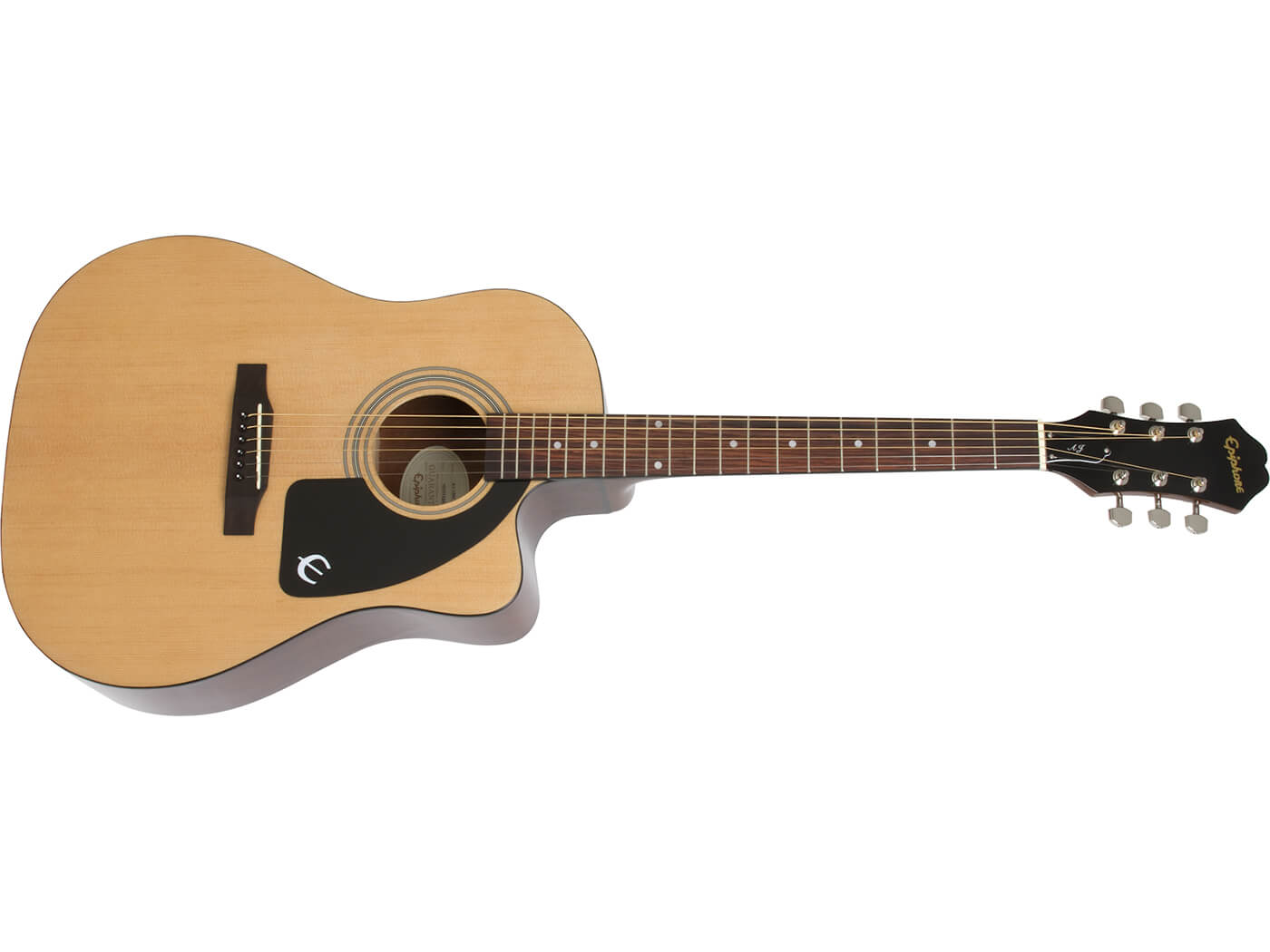 A simple, barebones jumbo acoustic, it sports a single cutaway, a mahogany body with a spruce top, and a NanoFlex pickup system.

Available in Natural. Lists for $249. 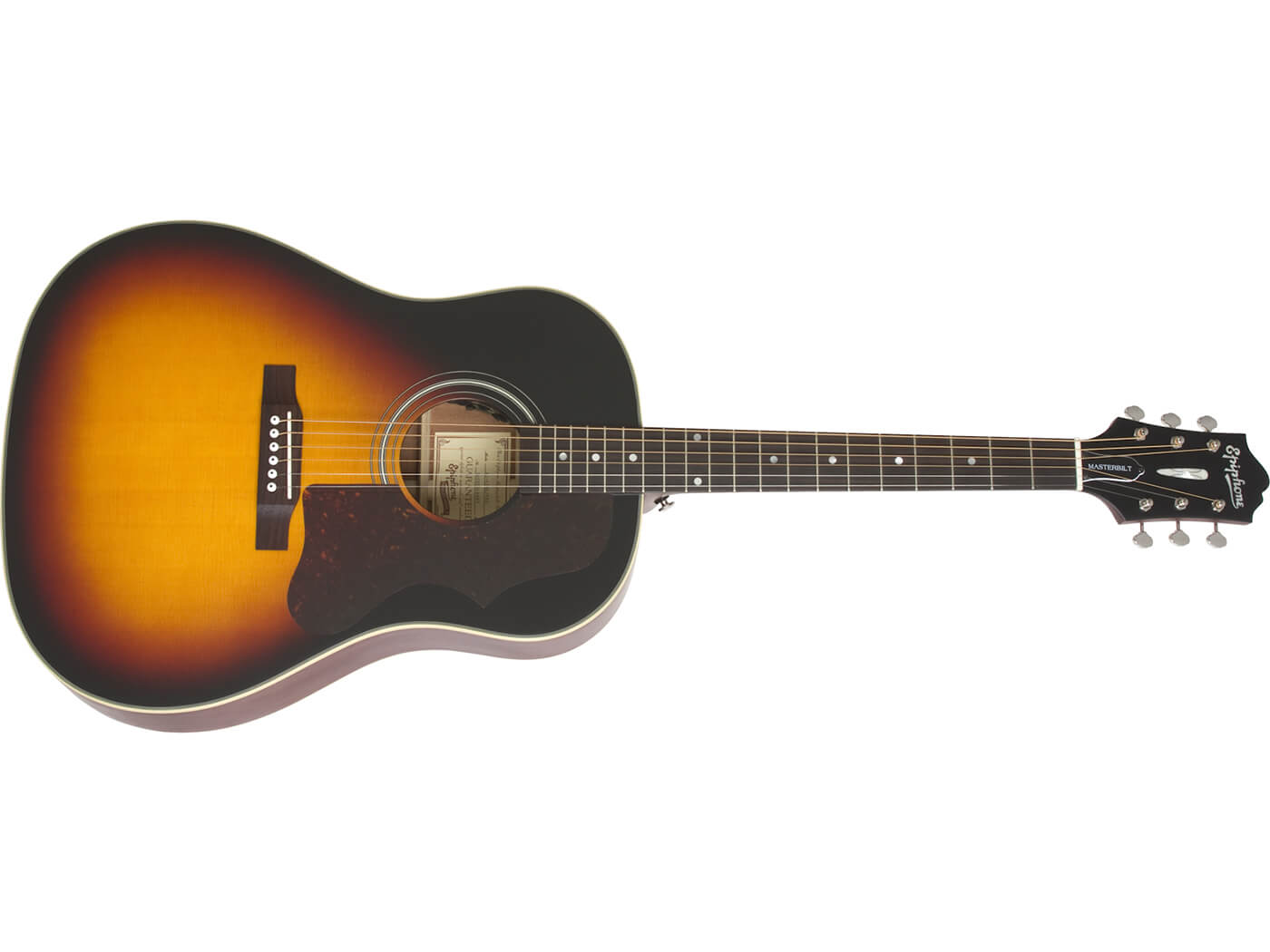 This Advanced Jumbo Masterbilt acoustic sports a round-shouldered mahogany body with a sitka spruce top, as well as a unique headstock profile. Some premium appointments include 5-ply body binding and a glued-in dovetail neck joint. 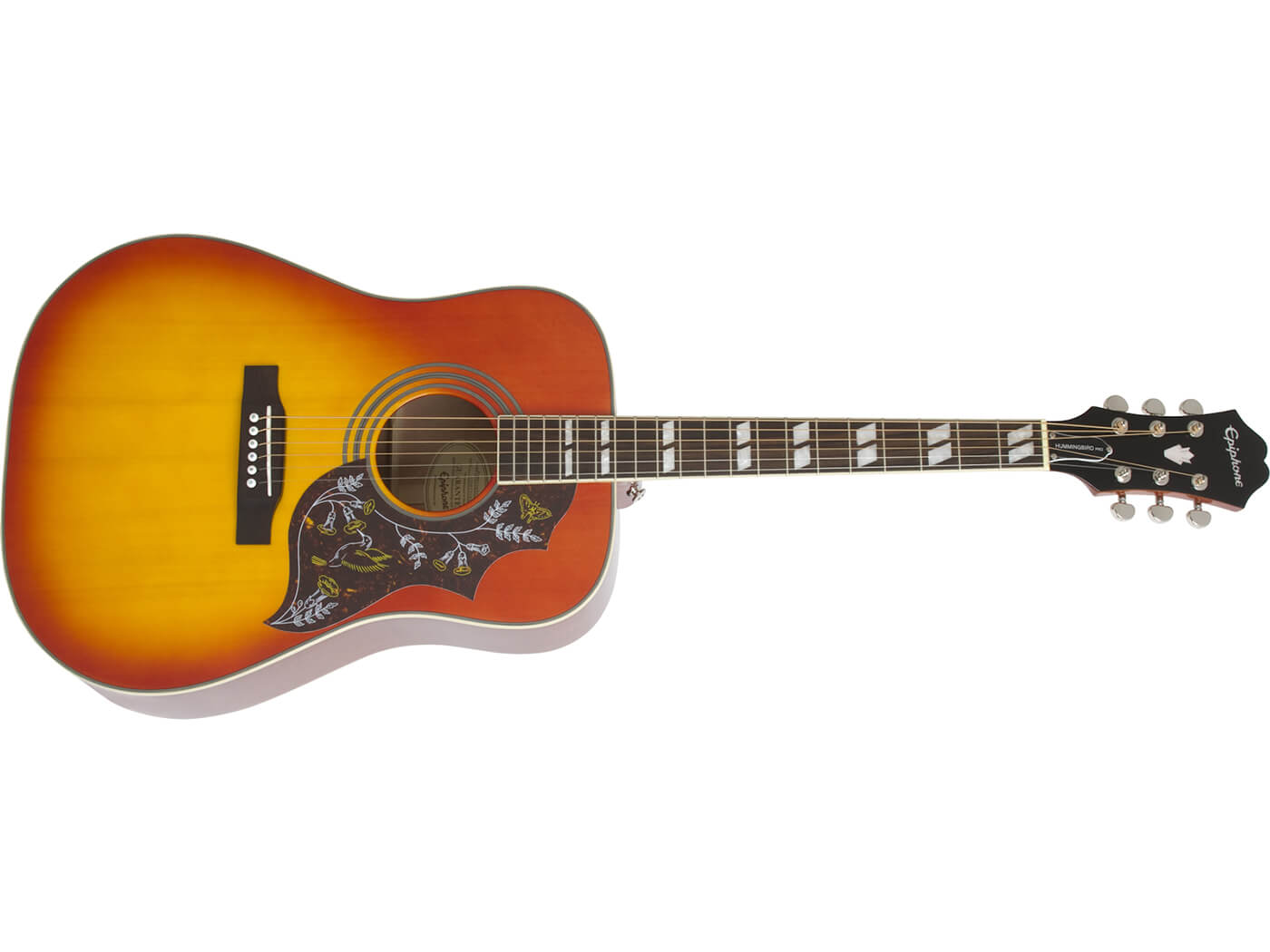 This ‘60s classic gets updated with a solid spruce top, a mahogany neck and body and 18:1 Grover tuners. True to its roots, the traditional Hummingbird pickguard is present, as is the traditional binding. Electronics-wise, there’s a Fishman Sonitone pickup.

Available in Faded Cherry. Lists for $369. 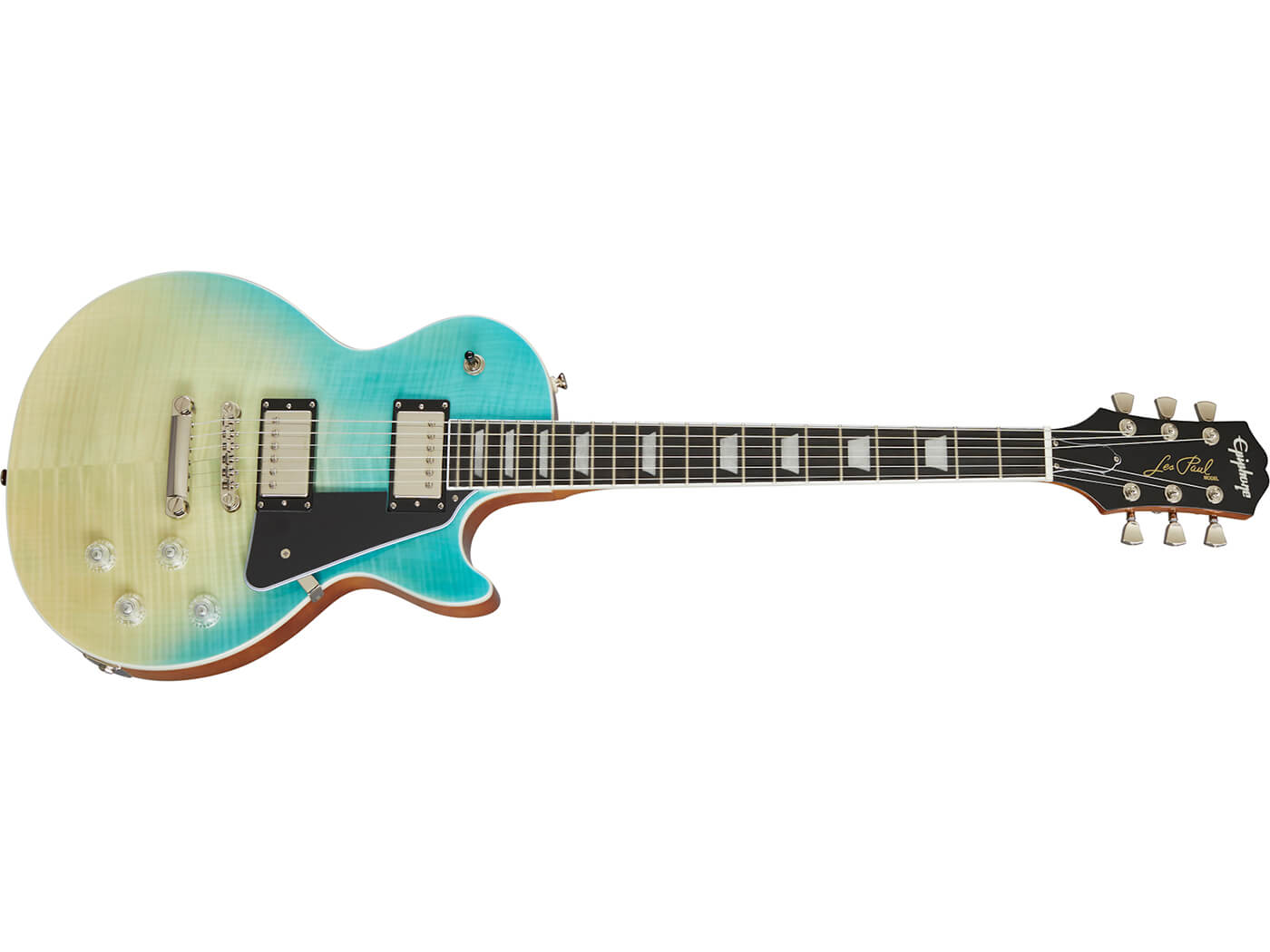 Taking the classic design in a modern direction, this guitar comes loaded with ProBuckers that can be phase-swapped and coil-tapped. A treble-bleed circuit keeps your signal bright and clear at lower volume, and a deep neck cutaway brings comfortable modern playability. 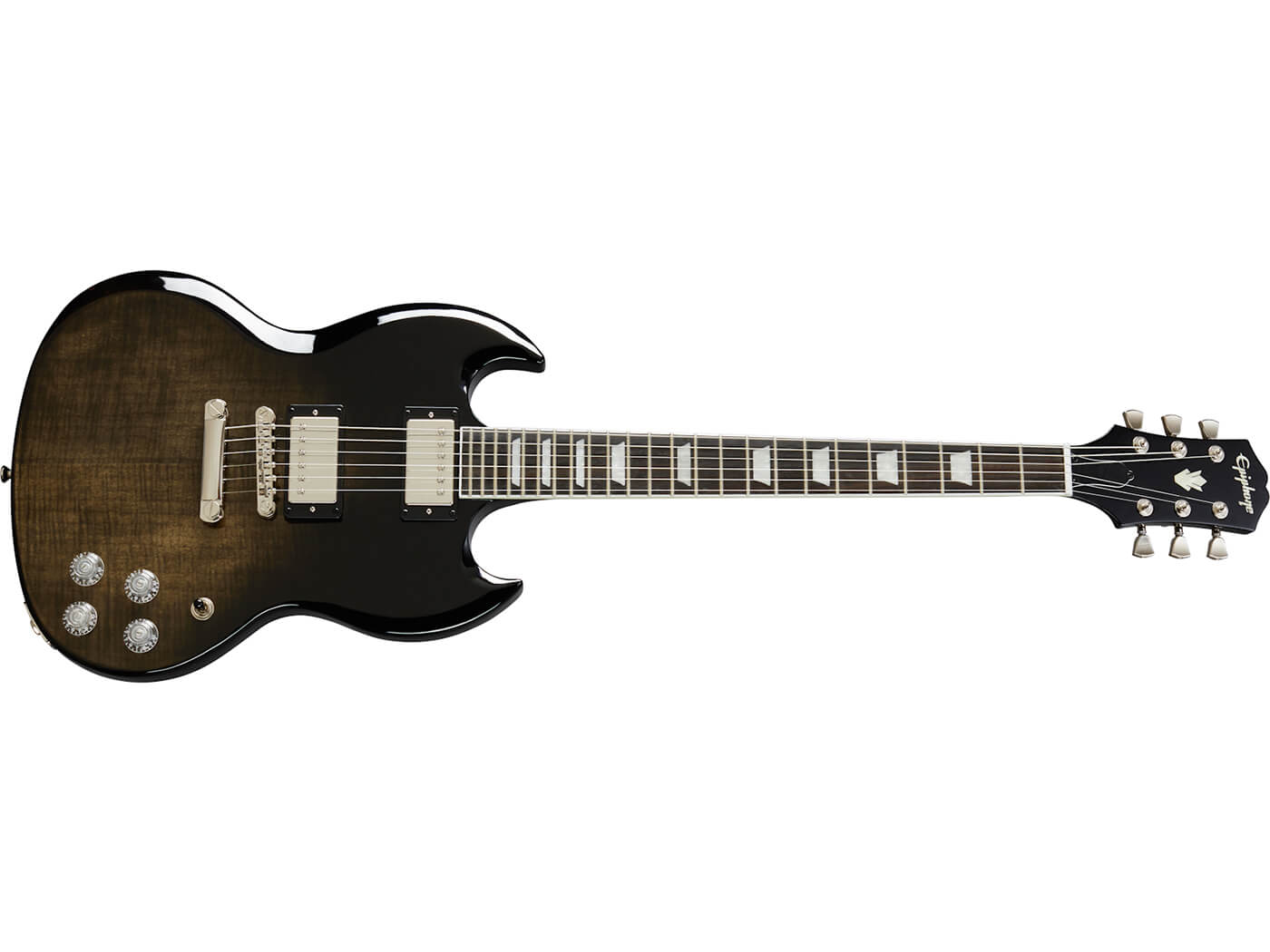 Epiphone calls this guitar “The SG of the Future!” – it again sports the coil-splittable, phase-swapping PAF ProBuckers as the LP Modern Figured. The strap button is also on the back of the top horn as opposed to the neck joint, allowing for even freer upper-fret access. 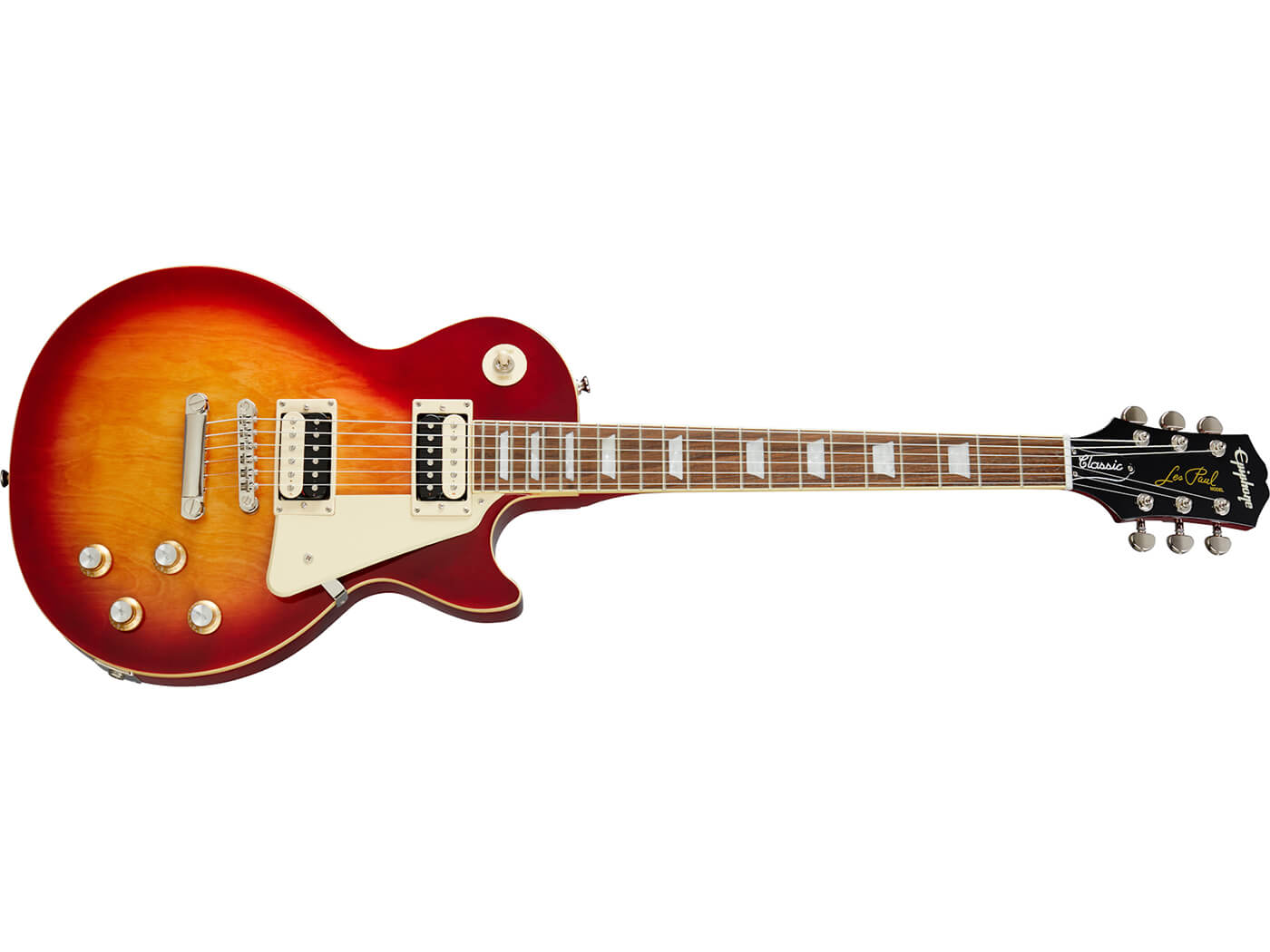 This no-nonsense take on the Les Paul is loaded with Zebra Alnico Classic PRO humbuckers, with an open-coil design for the look of a late-50s Les Paul Standard.

Available in Heritage Cherry Sunburst, Honeyburst and Ebony. Lists for $499. 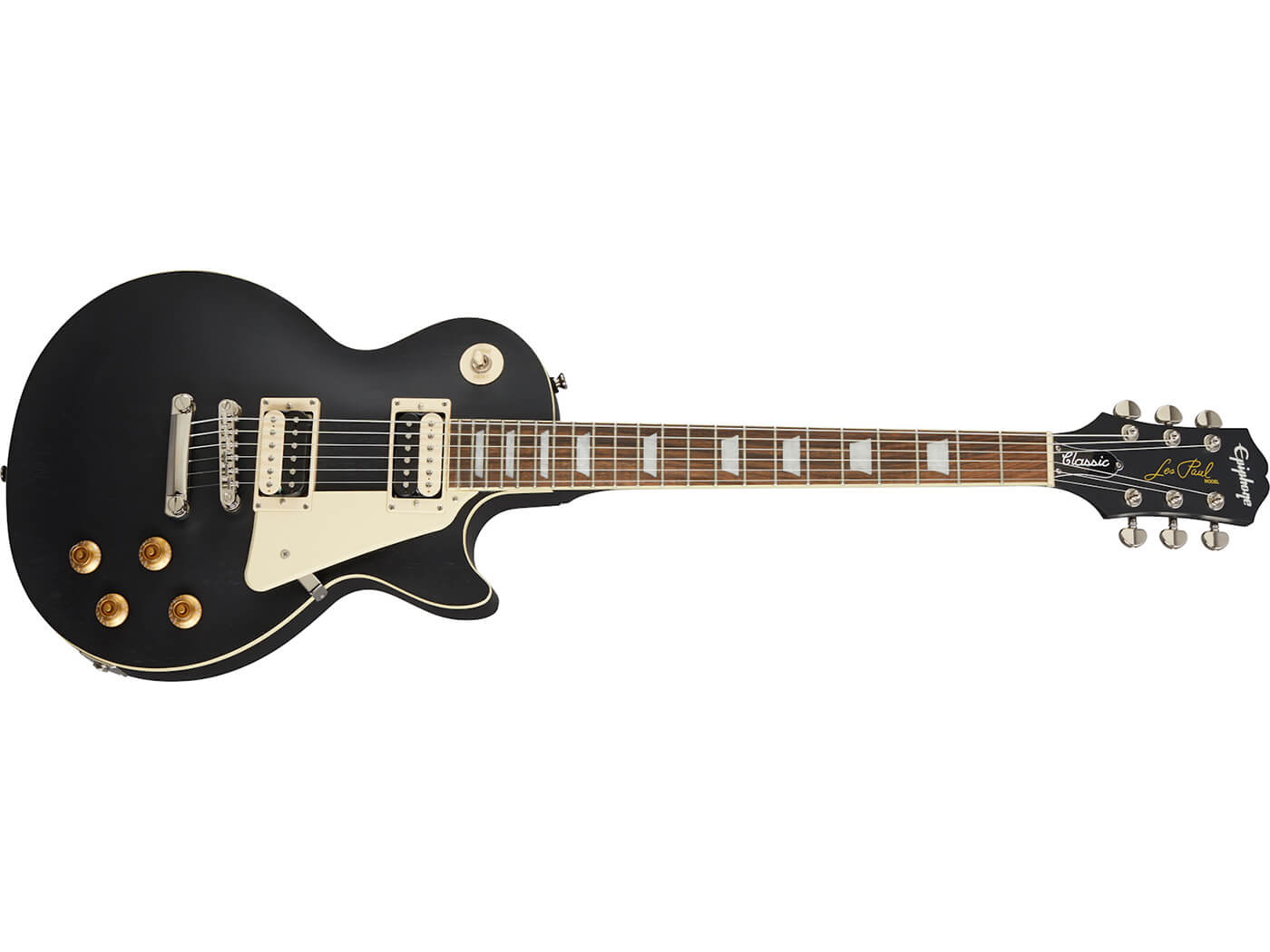 As above, yet coming in worn finishes as opposed to the pristine gloss of the Classic. 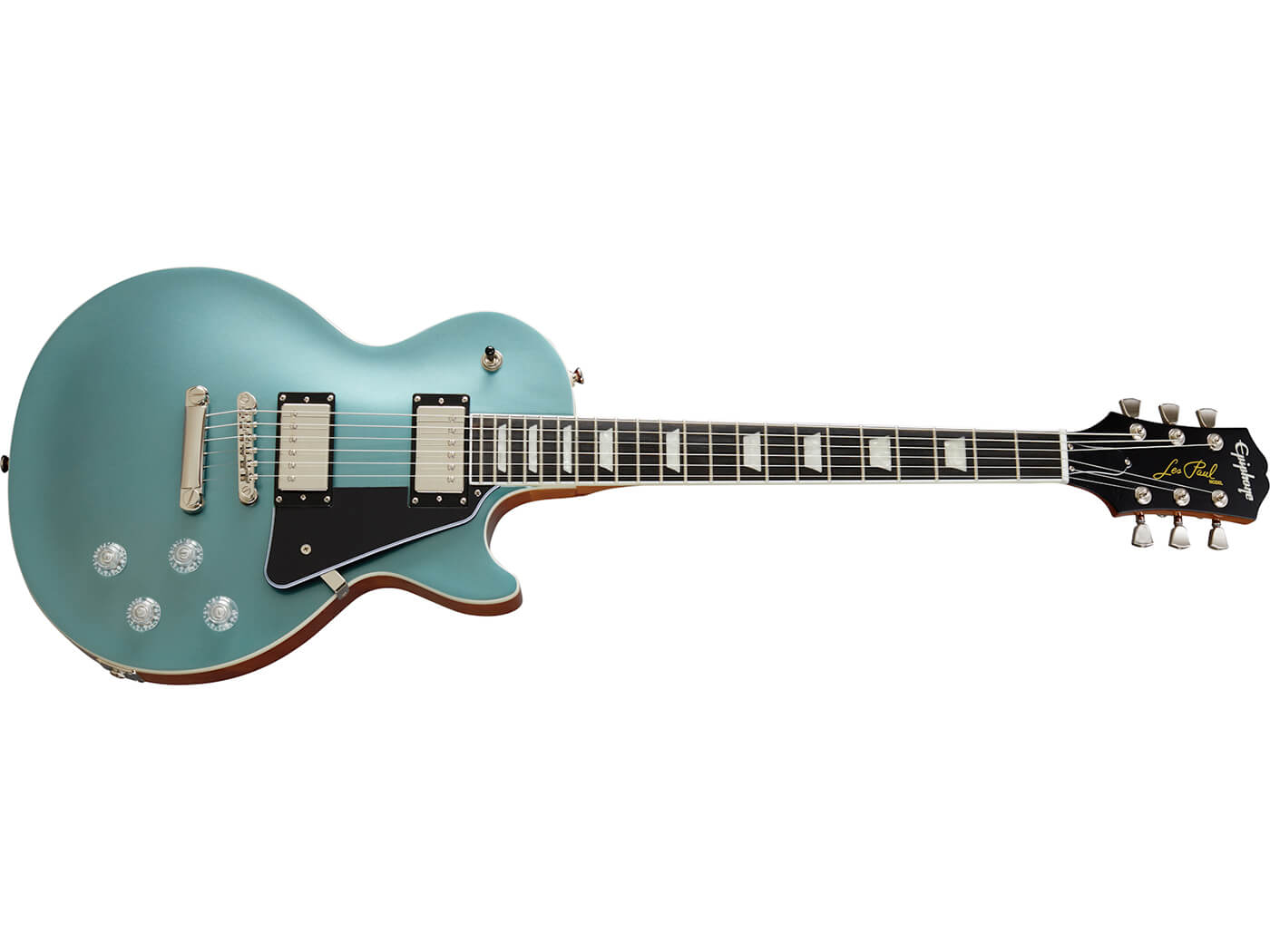 This Les Paul comes with a weight-relieved mahogany body, and sports the same electronics and ergonomics as its above Figured counterpart. 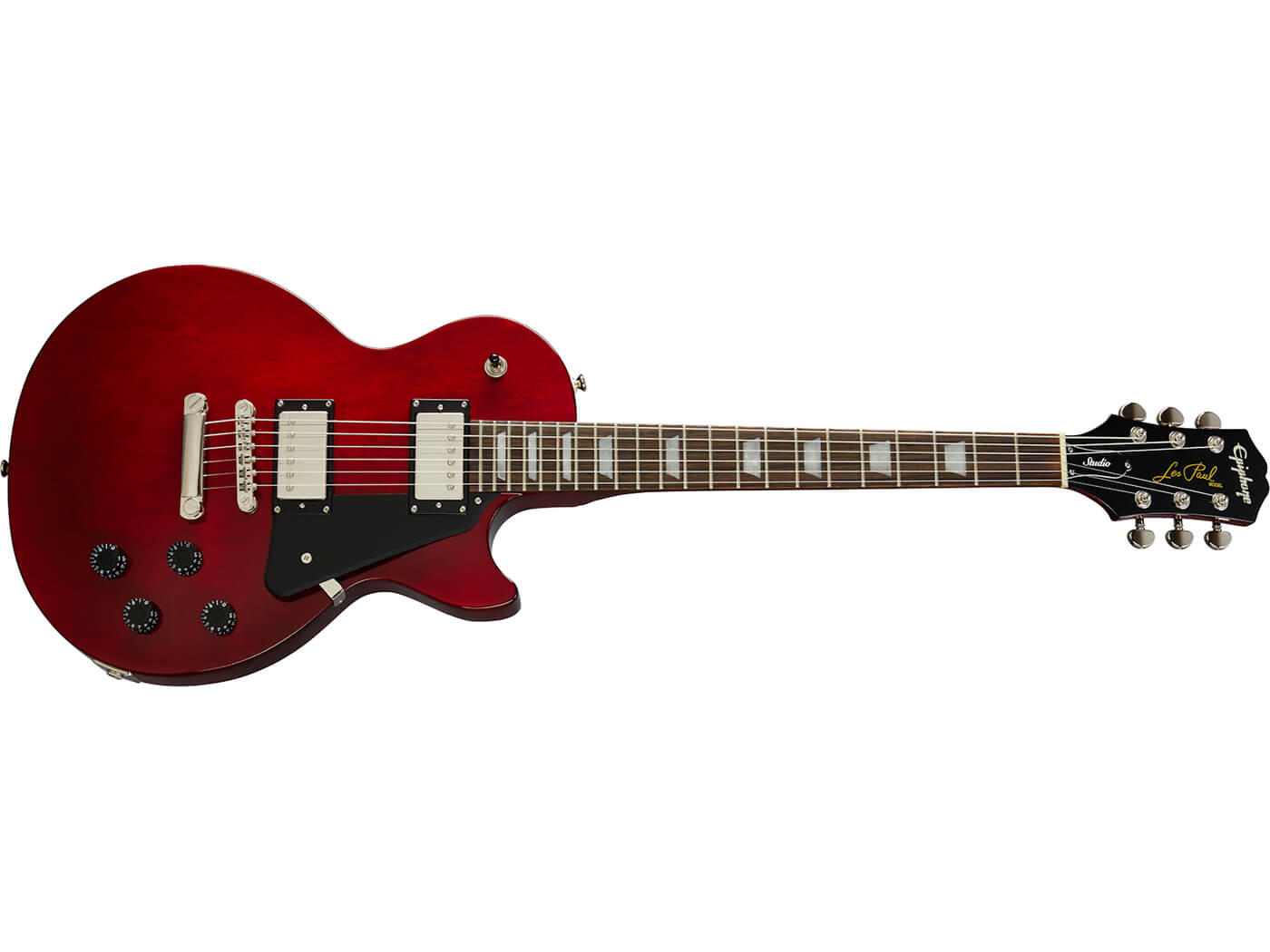 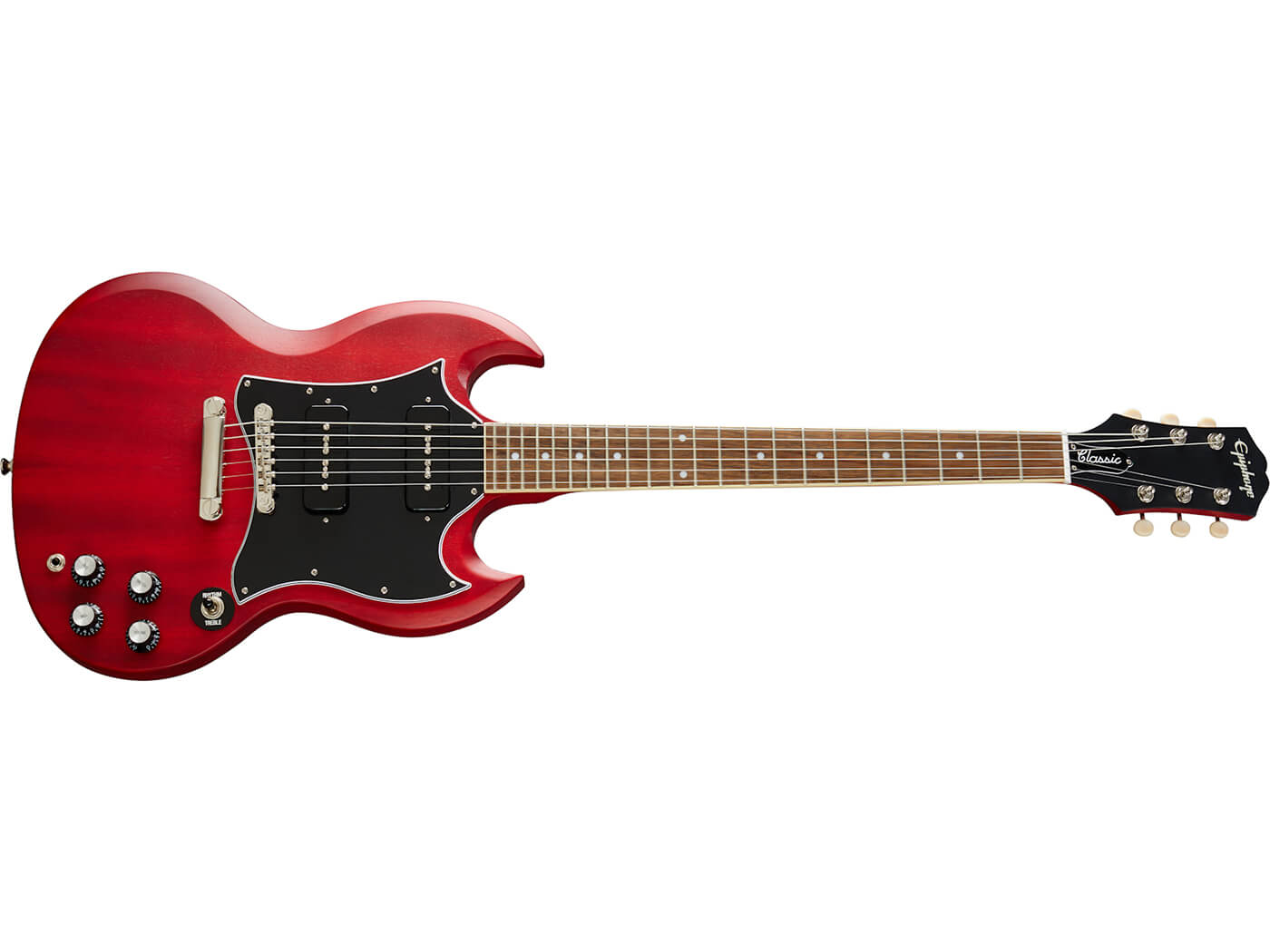 This SG comes with a worn open grain finish, and two soapbar P90s fitted into a classic ‘batwing’ pickguard, combining the simplicity of the clear single-coils with a more fully-featured SG design.

Available in Worn Cherry and Worn Inverness Green. Lists for $439. 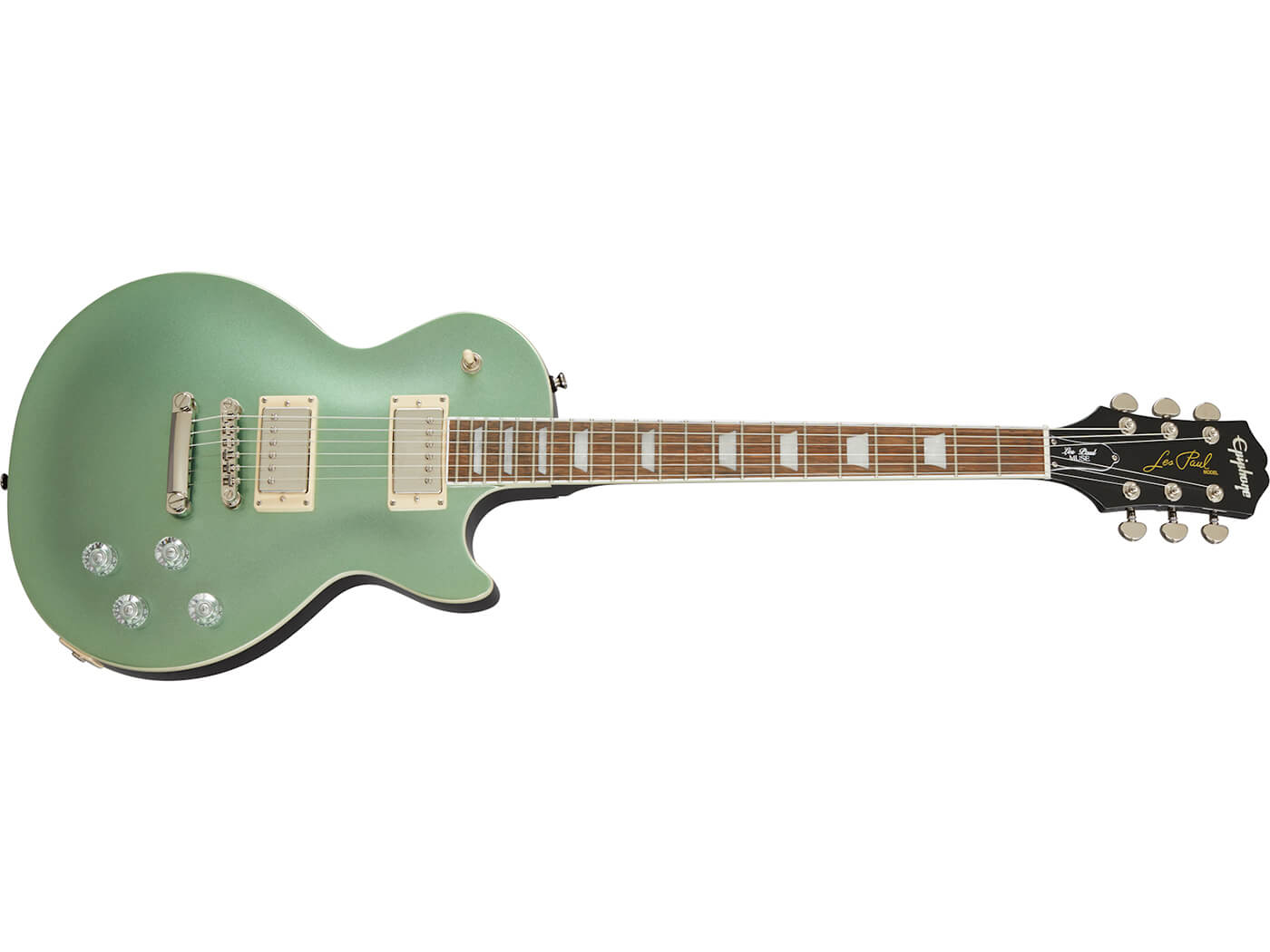 The Muse is perhaps the most eye-catching new Les Paul design, coming in some bright metallic finishes. The Okoume body sports some chambering, as well as a belly-carve for a more lightweight and ergonomic feel in the hands. Clear speed knobs complement the more overtly ‘modern’ colour choices. 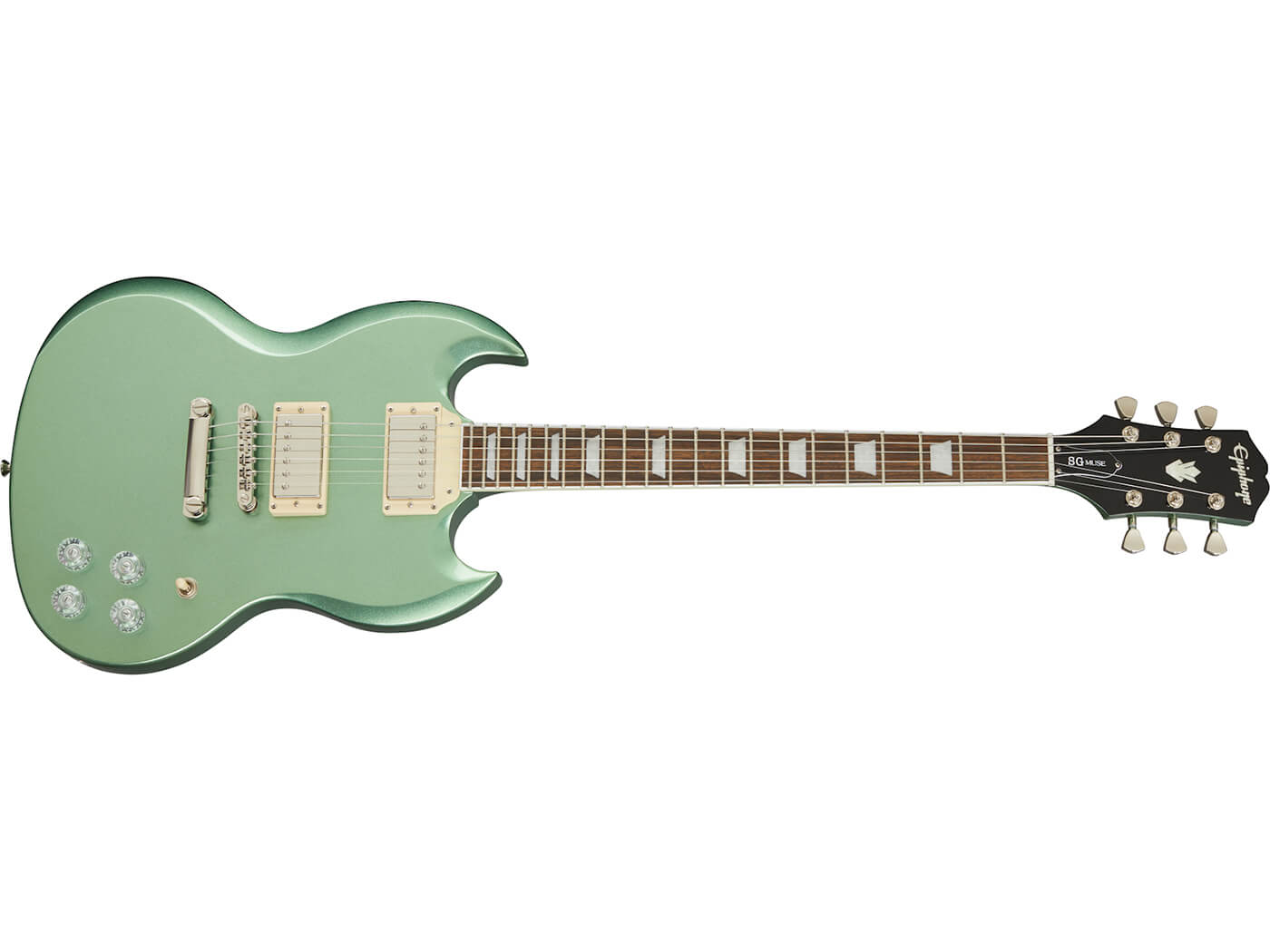 The SG Muse comes in the same bold finishes as the Les Paul counterpart, however, retains the mahogany body. High-output Alnico Classic PRO humbuckers mean a modern and aggressive sound is easily achieved.