Break Free from your boring old guitar rig with the new AmpliTube Brian May for Mac/PC and iOS.

IK Multimedia has announced AmpliTube Brian May for Mac/PC and iOS. Both iterations feature precise models of the exact gear used by the legendary Queen guitarist, all recreated in collaboration with May himself.

At the heart of the “ultra-realistic sound” that IK claims this collection to have is the brand’s Dynamic Interaction Modeling technology. From May’s Rangemaster treble booster to his monstrous three-AC30 live setup, guitarists can now enjoy new amplifier, cab and stompbox simulations in a convenient package, alongside presets covering his entire discography. Every model was created with the supervision and blessing of May and his technical team in order to carefully replicate his iconic rig.

A standout element of May’s unique tone derives from his guitar, the Red Special, an instrument that he famously hand built with his father in the 1960s from spare parts and an old fireplace. Due to the guitar being such an integral part of his rig, IK’s engineers went the extra mile to create a new stompbox effect that helps simulate the Red Special’s tone and controls. 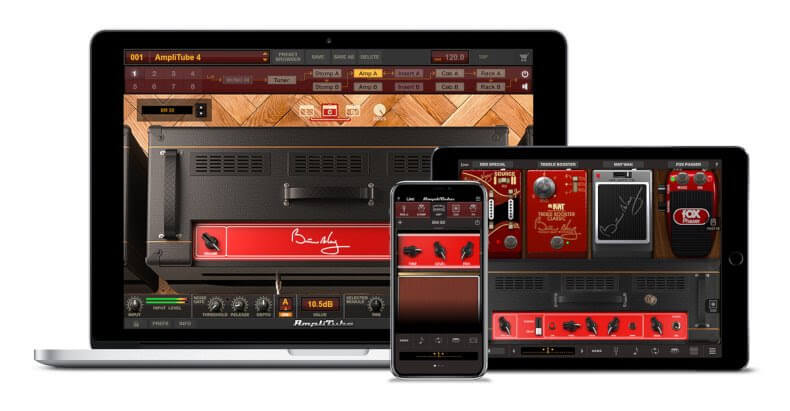 AmpliTube Brian May offers up to 11 new models including two amps, three cabinets, and up to six stompbox effects, and is available as a desktop app or a DAW plug-in.

Below is a list of the features included in IK Multimedia’s new Brian May package:

Based on the May’s triple VOX AC30 setup, the BM 30 offers three amps with the effects chain in a wet-dry-wet configuration. The other amp included, the BM DK, takes after the ‘Deacy’ unit that you’ll hear on many Queen tracks.

The 2×12 BM 30 Blue – called the 2×12 BM1 in the iOS version – is a triple cabinet that’s modelled after the cab section of the abovementioned AC30 that has Celestion Alnico Blue speakers. Also included is the 2×12 BM 30 H70, which is ‘equipped’ with Celestion G12H Anniversary speakers. Lastly, the 1×6 BM DK emulates a six-inch speaker for the BM DK.

Jamie Humphries, the guitarist of the official stage production of We Will Rock You, has compiled a full list of presets based on the band’s discography. So if you wanted to nail the Bohemian Rhapsody solo tone, all you’d need to do is recall the specific preset.