The virtuoso showed off the capabilities of FM guitar’s headless double-neck models. 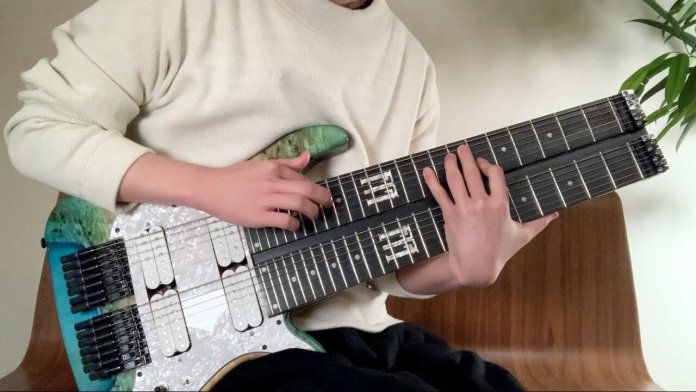 Ichika Nito has shown off the capabilities of FM Guitars’ 14-string two-neck electric guitar with a short instrumental piece.

Nito made full use of both fretboards, which unlike most double-neck guitars are connected in the middle. It’s perhaps more accurate to say that the guitar has a single neck and two fretboards, but either way, each set of seven strings has its own set of electronics – something it sounds like Nito also made use of, with a different tone for each neck.

You can hear his piece on the guitar below.

Nito was recently hailed by Marty Friedman as one of the leaders of an online guitar revolution, reviving the instrument from what he saw as a time where it fell by the wayside. “I’m so excited to see the direction guitar has come over the past few years due to people learning things from YouTube,” Friedman told Ultimate Guitar. “There are a couple of guys who stick out, I like Mateus Asato, he’s from Brazil and he’s just a beautiful guitarist,” Friedman continued. “There’s another guy called [Ichika Nito] from Japan and although his style is so completely different from mine – so much so, that I doubt I could even pick anything up from it – I just like the way he plays. I enjoy it.”

FM Guitars was launched in December of last year by Felix Martin, who explained the concept behind the style of instrument: “Playing two guitars simultaneously opens up many more possibilities on the guitar such as being able to play new chords, stacked chords (close voicings), chord-melody, percussion techniques, dual melodic ideas, new ‘shred’ techniques, etc. The guitars can also be in stereo to have different effects on each fretboard.”

Martin had been building guitars like this before launching FM Guitars. Players of his instruments include Yas Nomura, Ando San, Hedras, and himself. He said of the brand’s launch: “I’ve been working on launching this guitar brand since 2013, but I didn’t have the resources, it finally came true in 2020 with the support of 15 guitar owners prior to the announcement. That’s how I finally started this brand.”