It’s in great condition, too. 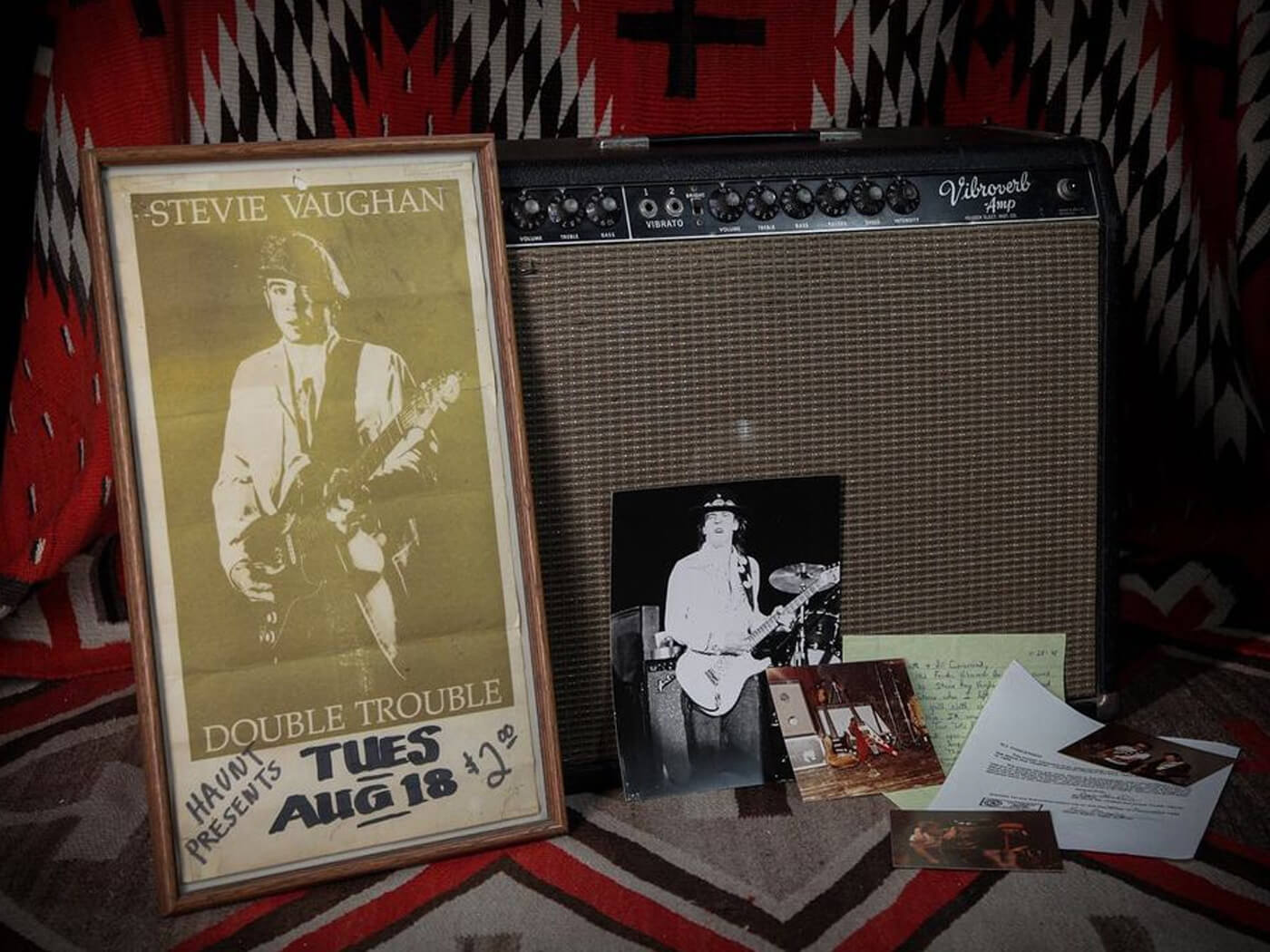 An incredible piece of music history has made its way to a vintage guitar store: The 1964 Fender Vibroverb that Stevie Ray Vaughan owned and played through on David Bowie’s Let’s Dance.

Nashville vintage guitar outlet Rumble Seat Music has posted some photographs of the amplifier, which arrived in the shop along with some impressive documentation: a poster promoting SRV’s band at the time, Double Trouble, a handwritten note, photographs of the amp and more. Take a look below.

Let’s Dance was perhaps the moment at which Stevie Ray Vaughan entered the public consciousness – when David Bowie met him at the 1982 Montreux Jazz Festival, he was still in the beginning stages of his career, a relative unknown who reportedly played to a rather unresponsive crowd at the festival. Despite the booing, his appearance at the festival would lead Vaughan to get a phone call from David Bowie, inviting him to the studio sessions for the album Let’s Dance, where he lent the now-iconic outro solo to the album’s title track and parts to five other songs.

The record would become one of Bowie’s biggest hits, with sales far in excess of his last releases. Bowie, recognising the contributions of Vaughan, booked him to join his band for the Serious Moonlight tour in support of the album. The two didn’t share the same approach to performance, however. In Texas Flood: The Inside Story of Stevie Ray Vaughan, Double Trouble bassist Tommy Shannon explained how in rehearsals “they wanted him to do these choreographed moves, but … they could never get him to do what they wanted, because Stevie was incapable of pretending to be something he wasn’t.”

Bowie also prevented Vaughan from talking to the press about Texas Flood, which had been completed between the Let’s Dance sessions and the beginning of the tour, and there was a failed attempt at renegotiating his performance fee contract. On top of all of this, Bowie had mentioned Vaughan and Double Trouble opening for him when he initially contacted Vaughan about playing on Let’s Dance – an opportunity that never came to light.

Things boiled over, and Vaughan backed out of the tour. His departure gained him notoriety, and was followed by him and Double Trouble supporting Bryan Adams, before the release of the acclaimed Texas Flood. This would be the first of three acclaimed blues releases by Vaughan and Double trouble in as many years, with Couldn’t Stand The Weather (1984) and Soul To Soul (1985) cementing Vaughan’s success.

The Vibroverb was one of Vaughan’s favoured amplifiers – often forming part of a multi-amp rig, paired with another Vibroverb, a Fender Super Reverb or a Dumbleland Special. Full details on this particular amplifier’s provenance are yet to come to light, but its immaculate condition could well be the result of Vaughan’s departure from the Serious Moonlight tour.

In any case, the amp has a place in music history – in part thanks to its use by Vaughan on one of the best-selling and best-received Bowie albums, and in part thanks to what it represents: a volatile partnership between two legendary figures in rock that didn’t manage to last until the first show of the tour.