A game-changing debut built from the embers of grief, Funeral channelled personal loss into some of the most deliriously euphoric anthems of the 2000s, while some thrilling guitar colours added vital thrust to Arcade Fire’s multihued arrangements.

A constant compulsion for cultural commentators, is the attempt to cleanly organise the often subtle gradations of historical change into clearly-defined eras. Music is one avenue where this happens all too frequently, resulting in those endless disagreements over whether certain artists slot into certain movements, and if not – just where do they fit? Though, in reality, there is much less collectivist thinking than the history writers imply, there are still those moments where it seems the wider consciousness of culture and music comes to something fairly close to alignment.

The post-9/11 period was a particular example, as the western world’s shared trauma permeated through the arts, while the war on terror raged overseas. By 2004, its shadow was inescapable. In the cinema, Michael Moore’s Fahrenheit 9/11 and Trey Parker and Matt Stone’s Team America: World Police dismantled those starkly defined ‘good vs evil’ narratives which were disseminated by the coalition, while on television, Lost’s onion layers of tense mystery ambiguously teased the promise of profound clarity. Meanwhile, much pop music of the time seemed content with shutting out the uncertainty of the 21st century, keeping an oblivious party going, and mainstream rock generally either still leaned towards the push-and-shove strop of the teenager-baiting nu-metal, or the detached leather-clad cool of New York garage rock.

Many were eager to be hoisted out of this all-pervading gloom. At the tail end of 2004, a six-piece troupe of bohemian (and quite eerie-looking) young Canadians, turned the tide, with the release of their grimly titled debut, Funeral. Stacked with powerhouse anthems of titanic, cinematic scope, its release beckoned a rapturous new dawn for indie rock.

“The first kid who beat me up when I was 12, was a high school kid who always used to talk about how the old arcade burned down and all these kids died…”  a ghoulish Win Butler uttered when Gothamist enquired how the band acquired its striking moniker. First formed in 2001 by Butler and longtime friend Josh Deu as a vehicle for exploring songwriting, Arcade Fire’s route to the big leagues truly started with the addition of the gifted creative (and Butler’s future wife) Régine Chassagne, whom the pair met while she was using one of Josh’s university’s shared rehearsal spaces. Striking a fast bond, Régine began co-singing with Win on the early material.

Though Deu would leave the band prior to their success, the partnership of Win and Régine would pursue an ever-evolving sound that took in folk, country and indie rock, performed by an increasingly expanding roster of musicians, friends and fellow Montreal miscreants. Though inevitable fallouts led to numerous disputes between Butler and the inconstant collective, these setbacks only set to more firmly forge those members of Arcade Fire that stayed the course, to become a robust creative entity. One such dispute resulted in the switching of then guitar player and drummer Dane Mills with Win’s little brother, William.

Early indications of the staggering aural majesty that the band could reach were manifold on the group’s debut EP Us Kids Now (AKA, the Arcade Fire EP). Opening with the jangling arpeggios of Old Flame, the whimsical acoustic folk of the Chassagne-led The Woodlands National Anthem and the multi-sectioned build of Vampires/Forest Fire, the EP proved a quick seller at Arcade Fire’s live shows – now shaping up as less conventional gigs and more thronging avant garde rallies, with frequent instrument switching adding to the group’s freestyle ethos. 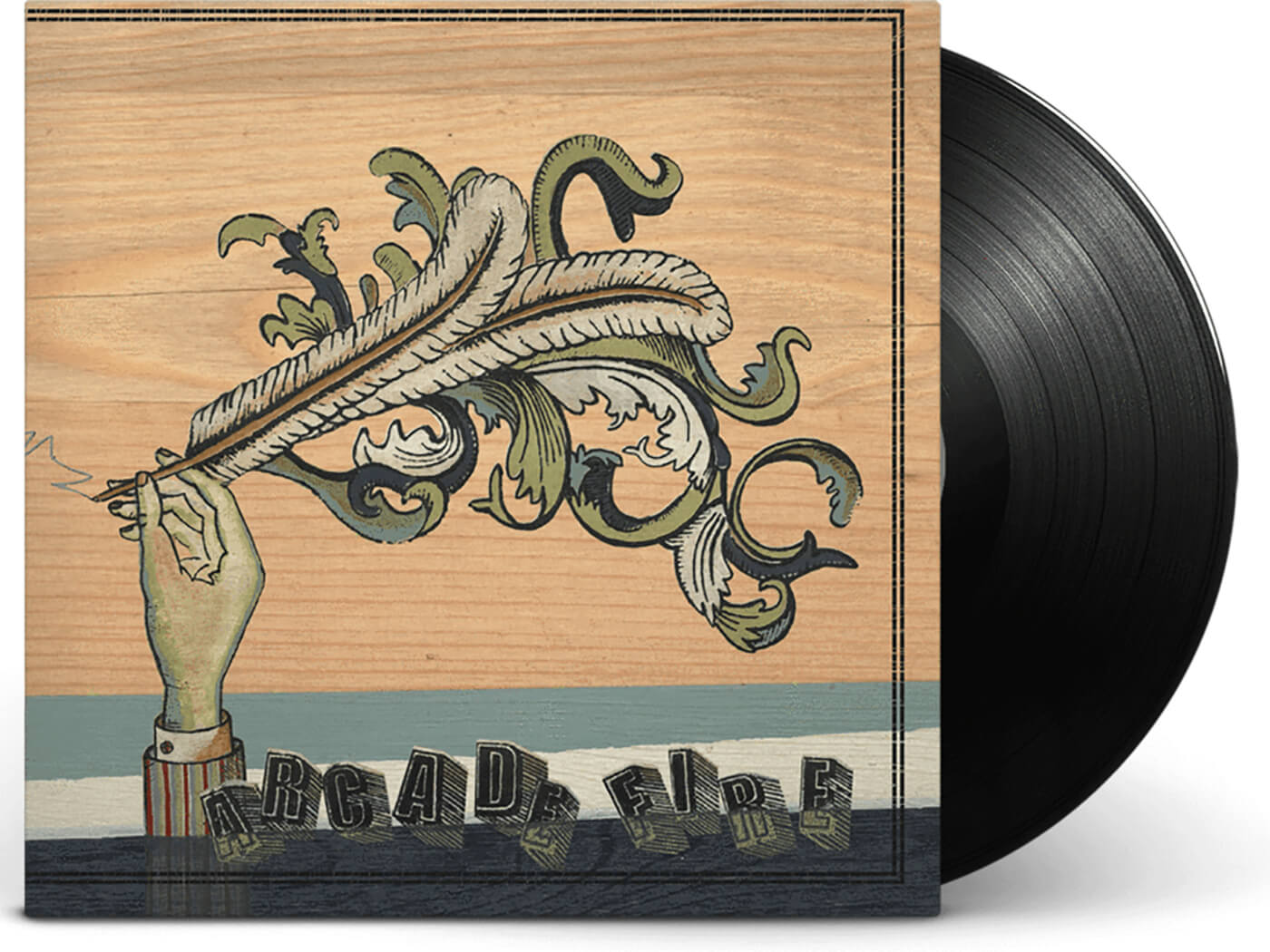 It wasn’t long before the band settled on making their first full length album, yet a series of emotional upheavals would inform the mood of the project, not least its title. Firstly, the Butler’s grandfather (the notable American jazz guitarist and bandleader Alvino Rey) passed away, as did Chassagne’s grandmother. This shared grief, coupled with the pair’s intense creative bond led them to marry in 2003, while shortly after, the band’s multi-instrumentalist Richard Reed Parry’s aunt also died. These lost family members would spectrally linger across the debut. Butler recalled, to Red Bull Music Academy, that the band went down into his late grandfather’s home studio following his death “He had a Pro Tools session open, he was recording himself with an octave pedal, doing bass lines, making a bass out of a guitar. Recording his own music. He pretty much invented the first prototype of the first electric guitar. He modified the pedal steel guitar. Used a primitive version of the vocoder, in the 30s. He was a pretty futuristic dude. He bought me my first guitar. The record is called Funeral partially from the experience of going to his funeral.”

At this stage the bulk of Butler’s guitar arsenal was made up mainly of Fenders, including a black Jaguar, a surf-green Jazzmaster and 72’ Fender Telecaster custom, while a 12-string brown walnut Gibson ES-335 was used for the rumbling power chords of a track that would be regarded as the album’s centrepiece, the transcendental Wake Up. Richard introduced the jangle of a Rickenbacker 330, though a Mosrite Celebrity Hollowbody was also alternated on occasion, such as the album’s cinematic opener Neighbourhood #1 (Tunnels).

As with their live performances, Butler was happy to switch bass duties with Richard and Tim, with the three passing around a Mosrite Joe Maphis Mark X bass, as well as a Gibson Ripper bass. Though these weren’t necessarily roles they were entirely comfortable with, “Richard is a bass player and he plays guitar on the record.” Butler told The Aquarian Weekly, “Tim is basically a guitar player and he plays mostly bass. For whatever reason, there’s a certain kind of energy that we’ve found playing something we’re not intimately familiar with that tends to translate to just a different kind of sound when we all come together and play.”

With a week of recording booked in Bilerman’s all-analogue Hotel2Tango studios in Montreal in August 2003, Arcade Fire finalised the shape of the songs. The album’s first half was to be dominated by the four-part Neighbourhood series of linked tracks, beginning with the gorgeous, impassioned swell of Neighbourhood #1 (Tunnels) which led to the Parisian punk of Neighbourhood #2 (Laïka), a nod to the heartbreaking tale of the first dog in space, the eponymous Laïka. Next came a bridging track, the candlelit poignancy of Une Annѐe sans Lumiére, which framed a sensitively delivered French vocal amid a gentle tide of acoustic arpeggios, played on a Martin Cutaway. Though these three opening tracks were exceptional listens, their shared mood of wintery outsiderdom, and that ever-present cloud of sorrow hanging over them would be decimated by the frenetic third section of the Neighbourhood cycle, Neighbourhood #3 (Power Out) was a dizzying indicator of the group’s ability to summon up lightning-paced riffs and delirious menace when required.  The verse’s central drop D riff, recorded with Butler’s Jaguar and Reed Parry’s Rickenbacker 330, evoked a frenzied, oddball paranoia that gave way to a slower, string-dominated chorus. Finally, the Neighbourhood sequence ends with the reflective Neighbourhood #4 (7 Kettles), which sketched a macabre picture of a cult-like town, as Butler bemoans the curtain-twitching neighbours’ “burning all the old folks, the witches and the liars”, a theme of suburban, isolated terror simmers. The arrangement is led by a circular, clock-like acoustic motif rooted around G. The gradual flow of the D and open G strings are repeatedly pushed by a 3-2-1 pattern on the D string, as an open note, a F♯ and G massage the verse melody.

The album’s recording got underway at Howard Bilerman’s 24-track analogue recording studio, Hotel2Tango, with the group’s fierce independence spurring them to self-produce, using reels of sometimes used tape as opposed to a digital DAW, something which lent the recordings a vintage warmth. In a one-week whirlwind session, the band laid down the record’s ten tracks, with the second half of the album delivering on the rising promise of the first. The weary heartbreak of Crown of Love and the buoyant spring of Chassagne’s acoustic paean to her home, Haiti, were both solid additions, as was what would be the album’s closer, the dreamy,  In The Backseat. But Funeral’s (and, arguably the band’s) defining tracks gradually grew from relatively simple beginnings, into a pair of era-soundtracking behemoths.

Built around a rallying charge of a repetitive 335 strum on C, overdriven with a touch of ProCo Rat distortion, the soaring euphoria of Wake Up would become Arcade Fire’s timeless showpiece. With a verse lyric lamenting the break-up of an early incarnation of the band, it’s the magnificent multi-tracked wail of the chorus that would make the song so universally beloved. “Wake Up remains their calling card” The Guardian reflected,  “grippingly charged with emotions and built to be sung back by tens of thousands.” The other key cut, the idealistic Rebellion (Lies) was driven by a bass chug rooted in A♯. The arrangement grows out with tweedy buzzes of Butler’s Jaguar, while Reed Parry adds a smattering of Rickenbacker chimes to build the song from simple garage rock beginnings to a full-blown parade by its end.

Though it was preceded by a considerable buzz from journalists in the know, and those fortunate enough to have seen the band’s outlandish early performances, when Funeral was released on the 14th September 2004, via independent label Merge. it surpassed all expectations. Met with widespread adulation, it was clear that Arcade Fire’s debut was something very special indeed. “That it’s so easy to embrace this album’s operatic proclamation of love and redemption speaks to the scope of The Arcade Fire’s vision.” wrote Pitchfork, “It’s taken perhaps too long for us to reach this point where an album is at last capable of completely and successfully restoring the tainted phrase “emotional” to its true origin.” While a mind-blown NME wrote “For those of us who still believe in music’s power to redeem, Funeral feels like detox, the most cathartic album of the year”

It wasn’t just the press that were stirred, the ever-astute David Bowie was a notable admirer, who – in a few short months – would have a big hand in granting the group wider exposure, following a surprising, wonderful performance of Wake Up with the outfit at 2005’s Fashion Rocks. “There’s a certain uninhibited passion in the Arcade Fire’s huge, dense recording sound,” Bowie told Rolling Stone, “They meld everything from early Motown, French chanson and Talking Heads through to the Cure in a kaleidoscopic dizzy sort of rush. I bought a huge stack of the Funeral CD last September and gave them to all my friends. I made so many converts.”

Reshaping indie rock as a dazzling spectrum of colour in contrast to the drab, ‘too-cool-for-school’ monochrome of many of their 2004 contemporaries, the release of Funeral saw the band’s off-the-wall sound explode into the public consciousness. By the year’s end, the euphoric Wake Up echoed from student dormitories to baseball games, from indie club nights to shopping malls.

Funeral was just the first chapter of the Arcade Fire story. They’d continue of course, to build on this early high watermark with a mushrooming canon of brilliance, from 2007’s shadowy Neon Bible, the sprawling, high concept The Suburbs in 2010, 2013’s electronically-tinged Reflektor and the infectious retro synth-pop of 2017’s Everything Now. Though a high quality bar has been maintained, Funeral still stands as the band’s defining statement. Its many jubilant highs, though imbued with their shared personal grief, continues to rouse new listeners to this day.