When Stuart Murdoch confesses in The Boy Done Wrong Again, “All I wanted was to sing the saddest songs, If you would sing along, I will be happy now”, it’s from the heart. In the first half of the 1990s, songwriting became Murdoch’s “reason to exist”. Suffering from Chronic Fatigue Syndrome and forced into a life of isolation, Belle and Sebastian’s introverted genius crafted a catalogue of melancholic bedsit chamber pop and some of the most deftly drawn observational writing of the modern era for their second album, If You’re Feeling Sinister.

The Glasgow band’s softly spoken guitarist Stevie Jackson summed up the 1996 album’s gently immersive appeal and Murdoch’s narrative brilliance, when he told the Pitchfork Classics documentary, “As usual Stuart’s miles ahead of all us. It’s about creating a sound and telling a story, and Sinister, that’s why it’s so successful and people love it. The song is king.” Self-confessed as “one of nature’s sidemen”, Jackson is a subtly illuminating presence throughout Sinister’s 10 songs. A guitarist since his early teens, who cut his teeth on pop classics by The Beatles, OMD, The Police and ABBA, his melodic hooks are the perfect foil for Murdoch’s ageless romanticism on an album Rolling Stone described as reaching “peaks of effortless pastoral grandeur”.

Not since The Smiths had a British band inspired such fervent devotional fandom, and those fans were further enraptured by the fact that Belle and Sebastian did it all their own way. A cerebral antidote to the bombast of Britpop, they refused to submit to the demands of the music industry. In fact, in 1996 they were nigh-on invisible.

When Belle and Sebastian signed to indie label Jeepster, it was on the condition that they wouldn’t be expected to release singles, promote their records or speak to the press. Live appearances were rare, too, the band playing eight shows in 1996 and 12 the following year. The buzz around Murdoch’s “band of misfits”, described by NME as “awkward, pretentious bastards”, grew by word of mouth, as they took on cult status with their fans, who the unimpressed music weekly dismissed as “a legion of bedroom saddo devotees”.

A sort of dark beauty

If You’re Feeling Sinister was released only five months after the band’s much-mythologised limited-edition debut Tigermilk. Having met bassist Stuart David on an unemployment scheme for musicians and recruited former Moondials guitarist Jackson, Murdoch completed the seven-strong line-up when he met singer and cellist Isobel Campbell at a party on New Year’s Day 1996. He had just written a short story about characters named Sebastian and Isabelle and it seemed like fate.

Emerging from years of inactivity, Murdoch conceived Sinister in six months, scribbling in exercise books while the band practised at Hyndland Parish Church, where the Christian songwriter was living. “I had so much stored up in me emotionally from the years and years of nothing,” he said.

The influences of Simon & Garfunkel, Scotland’s C86 scene, New York baroque pop band The Lefte Bank, The Smiths and Orange Juice are all over If You’re Feeling Sinister, Murdoch switching between piano and acoustic guitar while Jackson decorates the mix with his black humbucker-equipped Telecaster Custom. The album took five days to make at Glasgow’s CaVa Studios and three to mix. Engineer Tony Doogan described the unfussy recording as “a stroke of genius”, while for multi-instrumentalist Sarah Martin, Murdoch’s rich vein of form was “almost like Rubber Soul and Revolver… bang bang two albums, straight out.”

In a rare interview, Murdoch admitted “There’s nothing very sophisticated about our music, our songs are based on three chords, the classic ones.” Yet the intoxicating wonder of this absorbing album lies in his visionary ability to surround those delicate little compositions with sumptuous orchestral arrangements, never obscuring their inherent beauty. 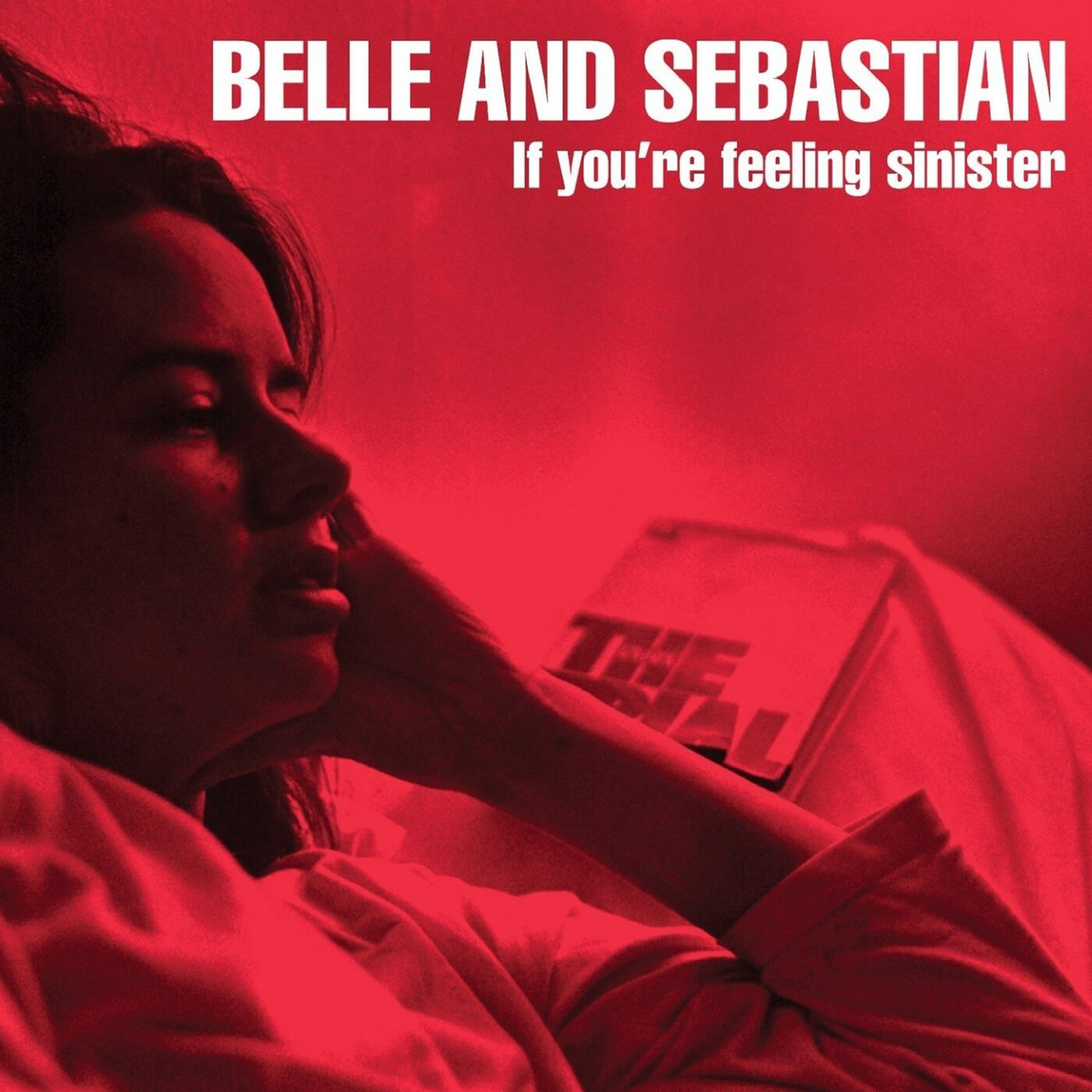 In the opening seconds of If You’re Feeling Sinister, an album about romance, desire and the bittersweet travails of adolescence, Murdoch croons softly “Make a new cult every day to suit your affairs”. As that first song, The Stars Of Track And Field, unfolds it swells to a regal grandeur, crowned by Mick Cooke’s trumpet playing, introducing the sad splendour that follows like the rain-sodden opening scene of a timeless black and white movie.

On Seeing Other People, Murdoch distils the essence of teenage infatuation: “We lay on the bed there, Kissing just for practice”, while Me And The Major is an idiosyncratic romp with a galloping F♯/B/G♯m acoustic chord sequence and Jackson’s rousing harmonica howls. Perhaps finest of all is the sweeping Like Dylan In The Movies, a melodic four-note bassline encouraging Jackson’s ragged overdriven descending eight-bar guitar solo and majestic strings. “You can put Dylan In The Movies in any era from the last 50 years and it would be a classic song,” enthused Doogan.

Stark piano ballad The Fox In The Snow is arguably the most beatific four minutes Belle and Sebastian ever recorded, the sombre chords entwined with Jackson’s twinkling arpeggios in C and a brief, sublime acoustic solo. Murdoch then wryly unveils his own mission statement, “Nobody writes them like they used to, So it may as well be me” on the album’s most streamed song, Get Me Away From Here, I’m Dying, melodically presaging 1998’s The Boy With The Arab Strap.

Jackson shines brightest on the stirring title track, setting the mood for a brutally painful narrative about teenage suicide, sex and religion. His emotive volume swells meld with field recordings from a school playground, Chris Geddes’ gorgeous piano motif and more glittering arpeggios. Opening with the heartbreaking couplet “Anthony walked to his death, because he thought he’d never feel this way again”, Murdoch’s writing is astounding.

Tailor-made for the disaffected

While his brain was overflowing with ideas, the rapid tracking of If You’re Feeling Sinister left Murdoch only partially satisfied, and he later attempted to make amends by recording a live version. A decade on, he told NPR: “It still sounds a bit folky. I think we could have a better go of it now.” Yet Sinister is Belle and Sebastian’s most striking and consistent album. Pitchfork named it the 14th best LP of the 1990s and Rolling Stone squeezed it into their top 500 of all time in 2020.

The Guardian’s Malcolm Jack was enraptured by a record he felt was “Subtly poetic, wickedly funny, gorgeously melodic, steeped in ramshackle C86 jangle and the pop classicism of Bob Dylan and The Velvet Underground”. In his history of modern pop, Yeah Yeah Yeah, Bob Stanley observed Belle and Sebastian were “tailor-made for the disaffected and the wilfully independent, for teenagers who spent warm summer days indoors.” NME, meanwhile, continued their ritual kicking of the band, giving the album 5/10 and claiming it sounded like “Stuart Murdoch limply strumming an acoustic guitar while his little sister fiddles around with My Little Casio.”

Despite several line-up changes, Belle and Sebastian’s popularity has endured through 10 studio albums, NME eventually relenting and bestowing on the band their Outstanding Contribution To Music award in 2014. Their critics, though, continue to miss the point, Jack Black’s character in Nick Hornby’s High Fidelity touching on something as he witheringly rubbished their “old sad bastard music”.

If that’s true, then If You’re Feeling Sinister is the most astutely observed, gracefully orchestrated collection of old sad bastard music Stuart Murdoch ever wrote. Its influence, particularly in the US, is undeniable – it’s hard to imagine Sufjan Stevens, The Shins or The Decemberists sounding as they do without Belle and Sebastian and If You’re Feeling Sinister. “I remember Stuart always wanted it to be like this big romance,” recalled Campbell of her bandmate’s masterwork, “and… I think it totally was, it really really was. It was the most fantastical, romantic thing.”