The Genius Of… Oh, Inverted World by The Shins

Natalie Portman was right – James Mercer changed a lot of lives with The Shins’ debut album. As a newly remastered 20th anniversary edition arrives this summer, we look back at the making of a pivotal indie-folk classic.

If ever an album’s title was apposite… In 2001, Oh, Inverted World turned James Mercer’s life upside down after nearly a decade toiling as a musician in Albuquerque, New Mexico. “This record gave me the life I never really dreamed I would have,” he explained as a 20th anniversary remaster of The Shins’ debut was released in June.

Having gone to school in England, where he fell in love with the literate romantic melancholy of Echo And The Bunnymen, The Cure and The Jesus And Mary Chain, Mercer returned to the States and formed a string of bands – Subculture, Blue Roof Dinner, Flake and Flake Music – with Jesse Sandoval, Martin Crandall and Neal Langford. Yet, equally influenced by underground US acts such as Pavement and Superchunk, Mercer was struggling to find a place in New Mexico’s grunge and pop-punk scenes.

“We weren’t very popular in Albuquerque,” he recalled. “Anything really macho, heavy and aggressive is successful there.” Seeking shelter from an atmosphere thick with testosterone, Mercer had been listening to oldies radio and soaking up classic songwriting from both sides of the Atlantic, yearning to create something timeless, earnest and emotionally nuanced rather than wrapped in layers of irony.

“I was longing for something I had experienced in the 80s with bands like The Smiths,” he said, “things that were really touching and not trying to sort of poke fun at it, but actually being honest about it.”

The Shins were Mercer’s vehicle to achieve that aim. Initially a solo side-project for an introverted and obsessive songwriting craftsman, they quickly became his main band.

In 2004 romantic comedy Garden State, Natalie Portman’s character Sam slips headphones over co-star Zach Braff’s ears and tells him the song he’s about to hear, The Shins’ New Slang, will “change your life”. It certainly changed James Mercer’s. He was 30 and six months into making Oh, Inverted World alone in his basement when a demo of what would become the album’s breakthrough single reached Sub Pop founder Jonathan Poneman via Mercer’s friend Isaac Brock of Portland band Modest Mouse. The Seattle label were impressed, signing The Shins, releasing New Slang as part of their Single Of The Month series and asking for more. Mercer immediately quit his job and moved to the Pacific Northwest. “The most punk-rock thing I could do in my life was something like New Slang,” he told Spin. Two decades later, the song has been streamed 213 million times on Spotify.

With a deadline set by the label, Mercer set about recording the rest of Oh, Inverted World on his basic Hewlett Packard PC with a cheap soundcard, a Rode NT-1 microphone and a Roland VS-840 six-track for the drums. The Shins’ signature sound – a haze of reverb surrounding Mercer’s plaintive double-tracked, high-register vocal – was born partly out of necessity. “One of the reasons I used so much reverb was because you can kind of hide a bad-sounding mic,” Mercer told Tape Op.

The guitar playing is an uncomplicated delight. Most of the parts are Mercer strumming an acoustic, likely his main writing guitar – a Gibson J-50 given to him by his father who bought it in Honolulu. Mercer’s primary electric at the time was a Harmony Silvertone Jupiter with DeArmond pickups and “beer stains and sweat stains, corroded and abused”. He also has a 1960s TV Yellow double-cutaway Les Paul Special and a Guild Starfire. 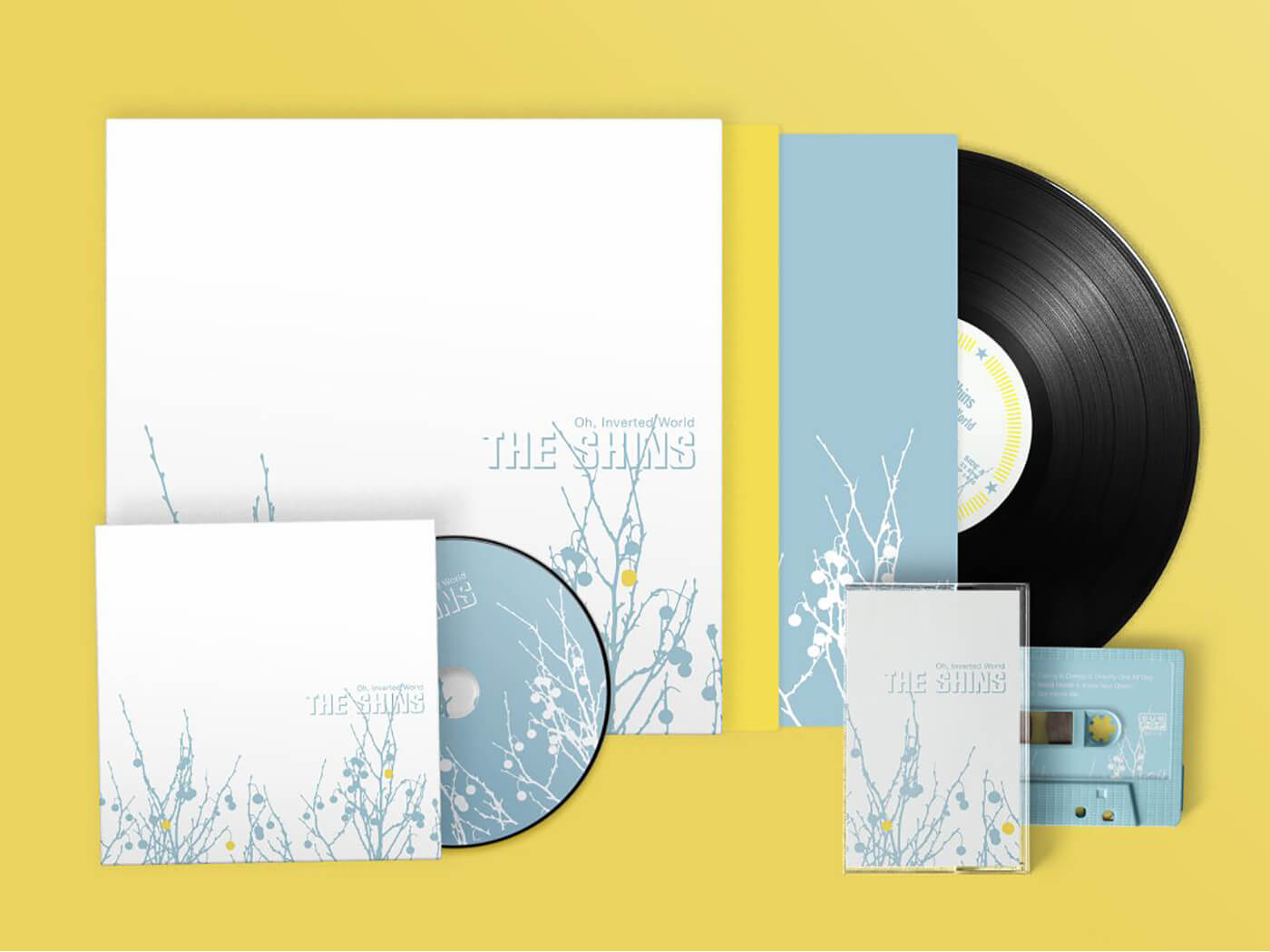 King of the eyesores

Oh, Inverted World is classic songwriting, 33 minutes of devastating simplicity. You can hear the influence of The Beatles, The Zombies, Simon & Garfunkel and Belle And Sebastian. Overflowing with ideas like a millennial Pet Sounds completed 1,000 miles up the West Coat, Mercer’s DIY recordings are elevated by fragments of xylophone, autoharp and cello.

Caring Is Creepy begins with a chimeric whistle that gives way to the bright sparkle of Mercer’s descending progression in B minor as he muses: “I think I’ll go home and mull this over/ before I cram it down my throat.”

Glinting arpeggios and an auto harp submerged in stereo delay decorate One By One All Day, before it melts into an askew modulated vocal coda reminiscent of the Beta Band, while there’s plenty of Brit Invasion energy by way of early Who and Kinks about Know Your Onion. Mercer’s angsty opening couplet of “shut out, pimpled and angry/ I quietly tied all my guts into knots” is wonderfully relatable, before Girl Inform Me’s featherlight harmonies and winding trebly guitar solo suggest a long-lost Beach Boys B-side.

The outstanding Simon & Garfunkel-saluting New Slang rises from a gentle tambourine rattle and dreamy falsetto harmonies. Mercer cycles round Am/C/F/G chords and undulating bass notes, cleverly dropping the minor in the choruses, but the beauty is in the sharp changes and jumps between 4/4 and 2/4, while the tremolo-flecked solo sounds as if it’s been beamed in from 1966. Mercer opens with “Gold teeth and a curse for this town” before dancing “like the king of the eyesores” and witnessing a dawn that “breaks like a bull through the hall”. It’s exquisite summer sorrow. Girl On The Wing’s brief unpolished lead break jumps out of the speakers so readily it sounds as if Mercer’s playing it on your shoulder, and the record closes with his favourite track of the lot – The Past And Pending. Boxy-sounding acoustic chords are joined by a solitary mournful French horn as he concludes sagely “in matters of love loss, we’ve no recourse at all”.

The whole thing, musically and lyrically, encapsulates the sound of an idyllic spring day, yet one imbued with all the heartbreak, anxiety and existential uncertainty of life in the autumn of your 20s.

Oh, Inverted World surpassed Sub Pop and James Mercer’s expectations, selling half a million copies with a little help from Garden State. The Guardian noted similarities to Love, The Kinks and Super Furry Animals on an album “full of gloriously skewed pop, created with love in mind, and dripping with yearning, whimsy and brittle innocence”. Drowned In Sound highlighted a “new Americana emerging somewhere between country, folk and the complexity of US urban centres”.

Indeed, The Shins were highly influential as the tide began turning away from the brief fad of nu-metal and the garage-rock revival led by The Strokes, Yeah Yeah Yeahs and White Stripes in favour of something more cerebral and vulnerable. “It’s hard to overstate how impactful that record was,” explained Sub Pop’s Chris Jacobs. Among the indie-folk hopefuls to sign for the label in The Shins’ wake were a Seattle band creating a buzz on Myspace called Fleet Foxes. Their self-titled debut went on to sell one million copies.

For Mercer, the success of Oh, Inverted World meant he no longer had to record on his PC in the basement, and the band honed and diversified their sound on 2003’s Chutes Too Narrow, Wincing The Night Away (2007) and the sublime Port Of Morrow (2012), but there’s something undefinably special about that life-changing debut. “We’ve done well, certainly, but the fervour that happened around Oh, Inverted World, we never quite reached again,” reflected Mercer this year. “This record symbolised a very special moment in my life, a watershed moment for sure.”