You suffer… but why?

Fans of angry guitar music of all stripes are spoilt for choice these days: for every precise percentage mix of hard rock swagger, heavy metal bombast and anarcho-punk sensibilities, you’ll find a subgenre to fit the bill. But in 1987, it was not so: scenes were more walled-off, and when bands like Napalm Death drove through those walls with proverbial bulldozers, the resulting violent clashes between metal and hardcore punk created the instant classic Scum. In the process, the band codified grindcore, laying the groundwork for one hell of a lot of angry music.

If you only have a passing interest in heavier music, you might think the last thing an album called Scum by a band called Napalm Death would do is raise some interesting philosophical questions, but it does. These are three of them:

How many band members can you replace and still have the band be the same band?
How angry should we be about the death and destruction wreaked in the name of capital gains?

How short can a “song” get?

Scum also provides some answers. They are, respectively:

Let’s address the first question first. The lineup of Napalm Death changes almost entirely from Side A of Scum to Side B: only drummer Mick Harris remains across the whole album, and he would depart the band in 1991, making ND a very loud crash course in the Ship Of Theseus question. But the revolving-door lineup of Scum is also a who’s who of British extreme music: Side A features the guitar work of Justin Broadrick, who would go on to pioneer industrial metal in Godflesh, and experimental electronic metal in Jesu. Side B has vocals from Lee Dorrian, who would later found doom legends Cathedral, and guitar from Bill Steer of Carcass, themselves a monumentally influential band.

But putting the members list aside for a moment, let’s take a listen to what Scum actually sounds like. The album begins with the positively relaxed Multinational Corporations – a building crescendo of feedback, rumbling bass and crashing cymbals underneath a shouted vocal refrain of “Multinational Corporations / Genocide of the starving nations”. While this sets the mood lyrically, it’s not until the second track, Instinct Of Survival, that things kick into the highest gear, where they shall stay for the next 30 minutes.

There’s a chugging riff from Broadrick that wouldn’t be too out of place on a Black Flag record, soon joined by a similarly appropriate skank beat from Harris. But then – everything goes a little bit mad. Harris kicks into a relentless blastbeat as Side A vocalist and bassist Nik Napalm begins a guttural diatribe. It is hardcore punk turned up to 11, sacrificing absolutely none of the vital, angry energy that earlier bands like Discharge and GBH embodied for the sake of heaviness. In a word: it’s grindcore. Arguably, the first example of it, and some even cite Harris as coining the term.

From here, the album is essentially a brick wall of sound. The change in lineup between the two sides doesn’t exactly revolutionise the sound, track 13 and onwards and it’s still intense grindcore fare. But on the second half the album, songs start to break out of hardcore punk structures, becoming (somehow) even more freeform and chaotic – embracing noisier, more experimental sounds alongside the balls-to-the-wall hardcore. 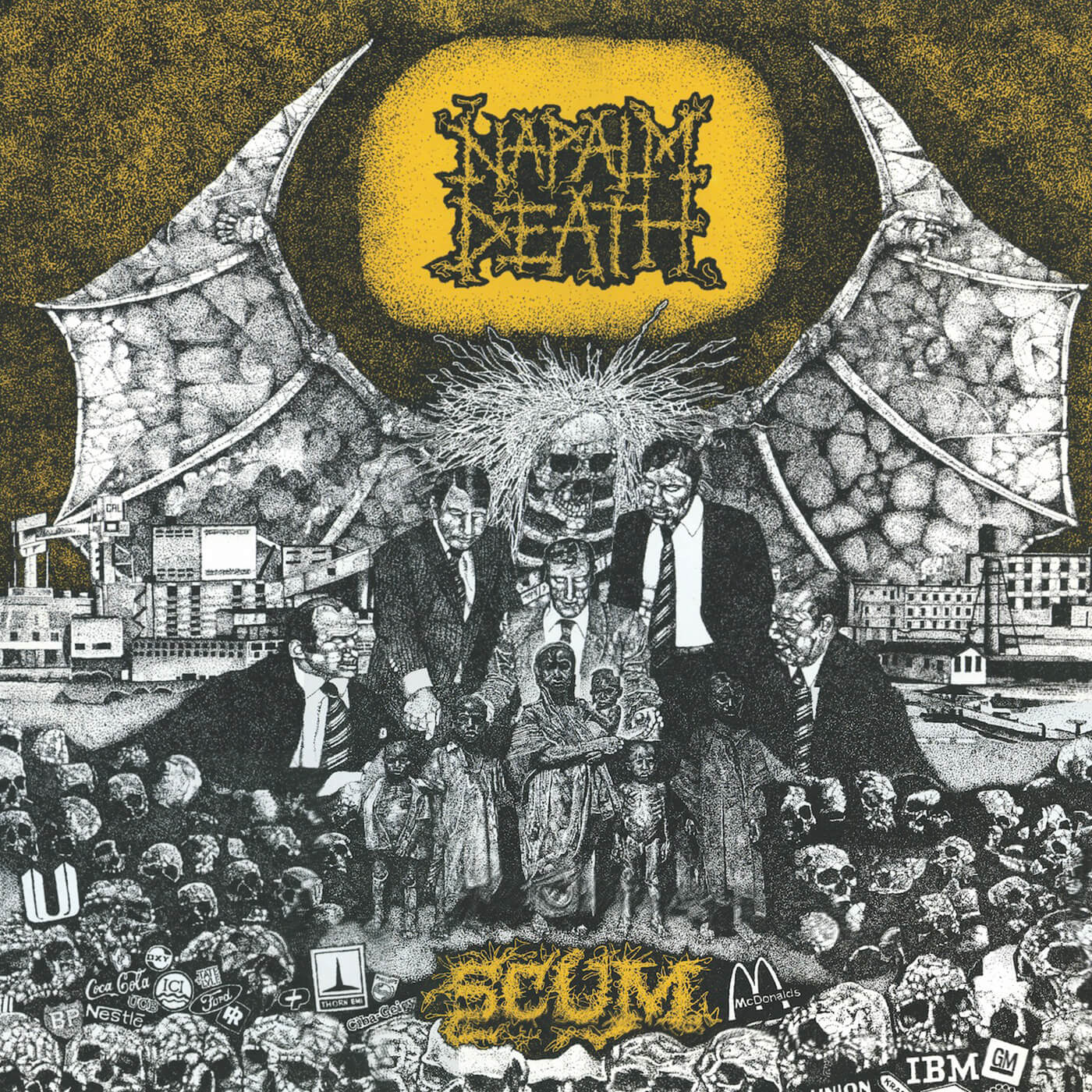 The sound of grind

Scum sounds like its title would imply. Both Nik Napalm and Jim Whitely’s bass guitar tones are utterly filthy, and Broadrick and Steer’s guitars are both soaked in a similar amount of tar-thick distortion, often being left to just ring out howls of feedback between blasts of riffing.

In all, there’s buckets of more gain on Scum than there is on earlier hardcore punk records: GBH and Exploited’s spikily overdriven guitars sound like Mayer-esque cleans in comparison. Scum is also set apart from the heaviest metal of the time, the guitar tones of which were shifting to clearer, more cutting and scooped sounds. Tones on Scum are neither: there’s plenty of midrange, but there’s also just plenty of everything.

Additionally, the whole production aesthetic is so rough that it’s hard to tell what distortion is coming from amps and pedals, and what’s coming from the mixing desk. But despite the fact that everything is in the red, Scum is a pretty impressive feat of engineering: throughout all the sonic chaos, there’s a relative amount of instrument separation, and guitar and bass transients poke through the constant blastbeats and cymbals. Yes, it’s not exactly something to test an audiophile set of headphones with, but that’s clearly not the band’s intention.

There’s scant information available about how the actual sounds were achieved, but if you’re on a quest for a similar sonic aesthetic, one will be achieved with amps and pedals of the hairy, fuzzy and ugly sonic persuasions. A dimed Marshall amp, and drive pedals such as the Boss FZ-2 and HM-2 with most knobs on full whack will get you in the ball-park.

Anarchy In The UK

With a few exceptions, UK punk was always more expressly political than its counterpart from across the pond. But before Scum, the most popular examples were far less blunt: at best personal and eloquent, at worst vague and shallow. In either case, UK punk mostly expressed a somewhat nihilist sentiment. “No future”, and so on. Conversely Scum is anything but nihilist, despite the violent, arresting imagery. The main question of the record is: “isn’t human life worth something, something more than just profit?”

And unlike than the pre-packaged anarchy of the Sex Pistols, Scum posits that the real fascist regime of the UK is more insidious and complex than can be summed up by half baked anti-monarchy sentiment. Scum’s anarchy rages against every supermarket, every McDonalds burger, every drop of petrol – and the human and animal suffering that’s lead to their creation. The results of the unfettered and ruthless free-market capitalism that was toted by everyone’s favourite Prime Minister. It’s refreshingly to the point – you don’t have time to be vague when your songs are this short.

And on the topic of brevity, it’s now time to address the album’s most famous track: You Suffer. A single blast of bass, drums, guitars and vocals, it’s an enduring part of Napalm Death’s legacy (they still perform it live to this day), and the ultimate example of their blunt as a hammer lyric-writing:

Four words and 1.316 seconds and they’ve said all they need to say.

Ultimately, Scum has lasting appeal, not just because it’s half an hour of excellent and intense grindcore riffs (although that’s part of it), but because the anger that drives it hasn’t really gone out of style. The half-hour’s worth of furious riffs and lyrics reflect anger at the soul-crushing, planet-destroying consequences of endless corporate growth, driven by a free-market-loving conservative government. Suffice it to say, it’s not going to be irrelevant any time soon. Political music can age like milk (especially if the people involved in making it, say, team up with Disney), but Scum hasn’t.