Can’t decide which Tube Screamer or TS clone to buy? Now you can have them all, and more besides, in a single enclosure. Huw Price tests the one Tube Screamer to rule them all… 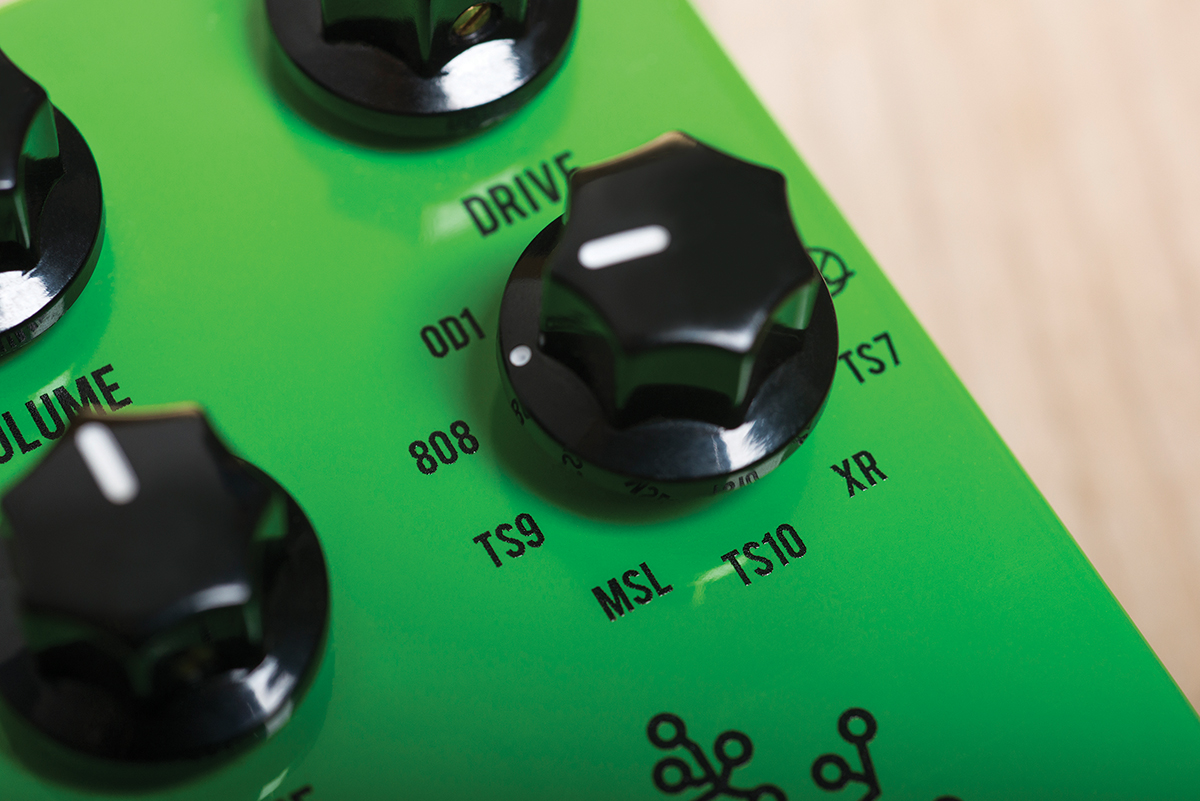 First there was the Boss OD-1 and then there was the Ibanez Tube Screamer. Then came the clones, the modifications and the reissues. Things seem to be come full circle with a widespread realisation that the originals were excellent sounding pedals all along and built in buffer amps make a lot of sense when you want silent switching and you need to push your guitar signal through a 20-foot cable.

But which Tube Screamer version is the best? For many it depends on their favourite SRV period, but the fact is, he used a bunch of different ones. Stevie probably didn’t know a 4558 chip from a French fry and wouldn’t have been interested in all that anyway.

Tube Screamers are all great in different ways but getting one of each would be a dauntingly expensive undertaking. This is where the Bonsai comes in because JHS has crammed eight Tube Screamer variations and an OD-1 into a single enclosure, with a nine-position switch to select the overdrive type.

Myriad options are most commonly associated with modelling technology, but the Bonsai is all-analogue. With all the extra circuitry, which JHS spent three years developing, there’s no room for a battery compartment or the input and output buffers of the originals. This is a true bypass pedal, complete with the slight popping sound that accompanies switch-on. 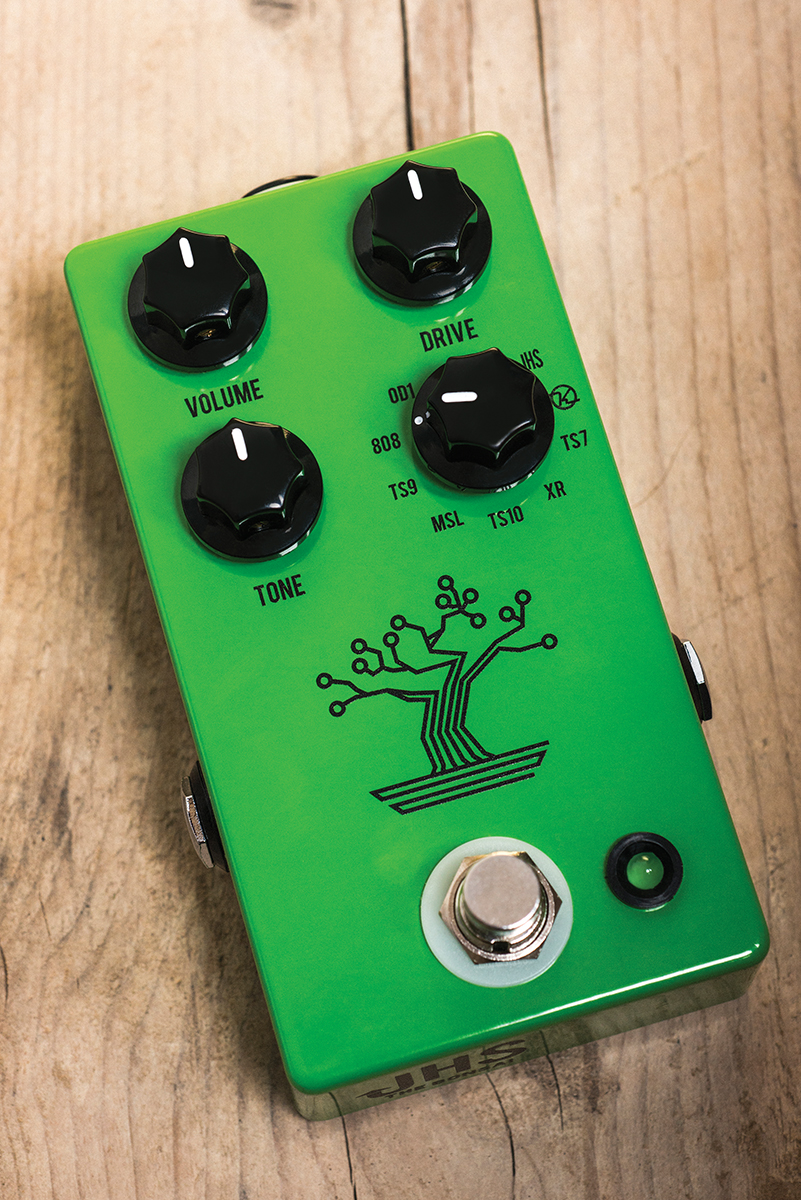 Let’s be clear from the outset – the Bonsai isn’t nine distinct overdrives in a single box. It’s more like three overdrives plus six variations on a theme. The OD-1 is a rough diamond and we compare it to a DIY build OD-1 with an added tone control. Despite the authentic absence of a tone control on the Bonsai version, it’s unmistakably the same circuit with symmetrical clipping diodes and a rougher but clearer sound than a regular Tube Screamer.

In a direct comparison with a 1981 Ibanez TS9, in TS9 mode the Bonsai sounds similar, but the accuracy falls slightly short of the Maxon reissues we looked at last year. The Ibanez has a little extra smoothness in the midrange and the Bonsai has more of a grainy upper midrange emphasis. Surprisingly (or maybe not) the Bonsai does sound almost exactly like our vintage Ibanez unit when it’s in 808 mode.

Sweeping through the TS modes, each offers subtle changes in gain and frequency emphasis. MSL gives a throatier low-mid bark while TS10 lowers the gain and applies a more extreme low-end roll off that takes a bigger bite out of the low mids.

The XR mode sounds like a decent boutique clone of a Tube Screamer – the type that broadens the frequency range and opens out the slightly murky midrange for improved transparency, without losing the essence or charm of the Tube Screamer tone. Keeley mode ticks the same boxes, and while retaining even more of the original Tube Screamer tonality, it also offers improved clarity and a more percussive edge.

There are two real oddities – TS7, which produces the highest gain and a thick but well defined velvety sustain, and JHS, which is by far the loudest and cleanest mode. This may actually be our favourite because it’s more about clean boost, mild overdrive and clarity enhancement. That said, it’s also the mode that least resembles a TS, but it’s a very useful sound to have on hand. 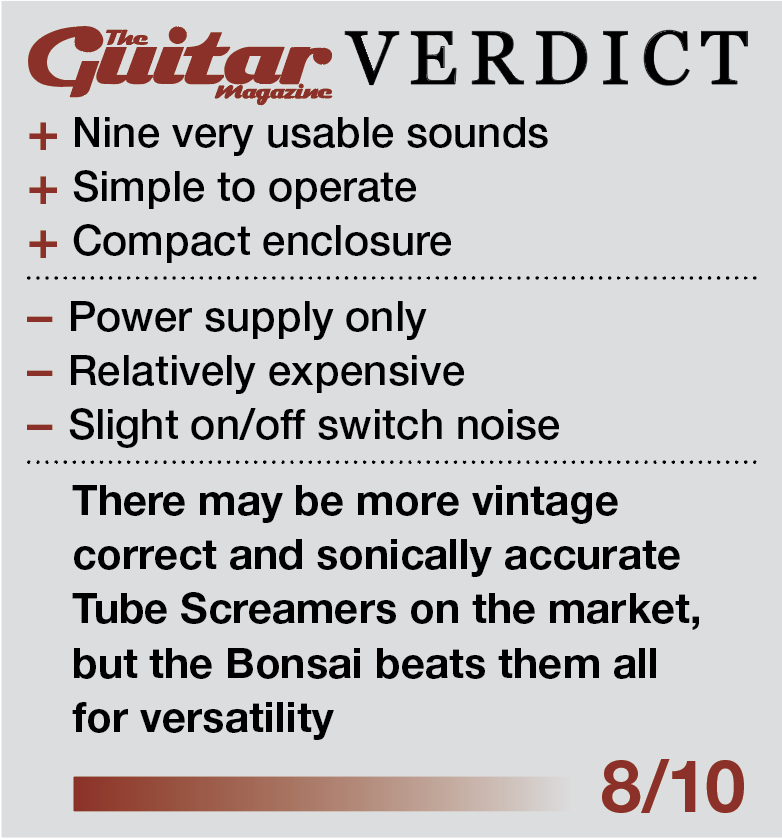