A versatile, hybrid fuzz with active EQ and some angry tones that go way beyond the retro stylings. Could this be the one fuzz to rule them all? 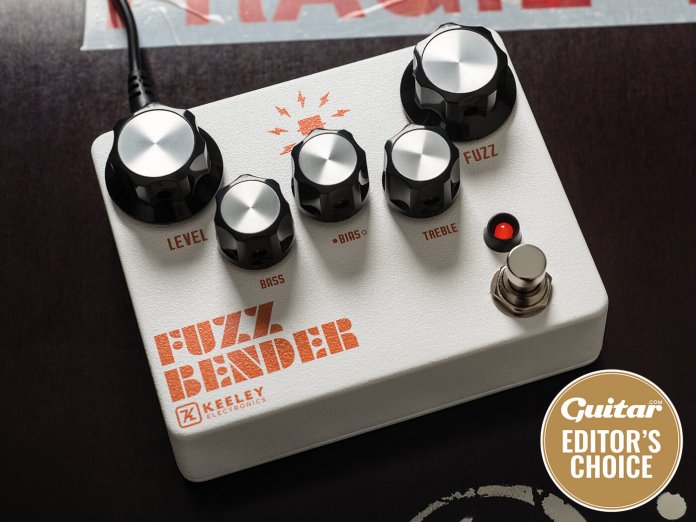 Fuzz pedals have been responsible for some of the most visceral, primal guitar sounds ever committed to tape (or indeed hard drive) – and as a direct result of the work of guitarists such as Jack White, Annie Clark and Dan Auerbach, the past decade has been replete with fuzz-driven monolithic riffs and a corresponding spike in fuzz-related activities.

With this renewed interest has come a slew of pedals geared for those moments when only snarling saw waves and sputtering velcro chaos will do.

These designs range from Swiss-watch intricate to blunt-force-trauma simple. The new Fuzz Bender from Keeley Electronics promises to hit the sweet spot between those two extremes, with a sophisticated combination of two modern silicon and one vintage Japanese germanium transistors and an intuitive five-knob layout.

Presented in a landscape format with top-mounted jacks, retro-style knobs and orange lettering on its white case, there’s no denying that the Fuzz Bender is an attractive unit with looks that hint at the tonal quality to come.

With the bias knob set fully counterclockwise and the remaining four knobs at noon, we’re greeted by an aggressive whirlwind of fuzz. Muff-like in character, but with more definition than the average Pi, it’s confrontational but controlled.

Rotating the bias knob clockwise brings out more spitty, spluttering voltage-starved flavours which work particularly well with a bridge humbucker. Things become increasingly random the further you go on the dial, with plasticised tailspins and throttled sounds leaving your notes clawing for the safe word.

This is not quite a gate as such; instead, it regulates the shape of your sound from square wave overload to spikey, sawtooth chaos. Many ‘twin transistor’ fuzz pedals offer a switch to toggle between voices, but in this case, a knob-based blend makes for a far smoother experience.

While the bias knob may play a vital part in the Fuzz Bender’s sound, man of the match has to go to the pedal’s active equalisation, which offers +/- 20dB at 100Hz and 10Hz. In conjunction with the level and fuzz controls, this is the true heart of the Fuzz Bender.

The amount of ‘push’ on offer makes for a hugely versatile unit. If you’ve never punished your amp with +20dB of bass, then we can wholeheartedly recommend you try it at least once. It’s a huge sound! The Fuzz Bender’s treble voicing is focused at around 10k and the more you boost it, the closer it gets to an octave effect with the capacity to coax out some extra beeps and squeals as you explore.

During our time with the Fuzz Bender we are reminded of just how versatile fuzz can be when supported by an active EQ circuit and powerful gain staging. Further experimentation with the level and fuzz knobs brings out a wide variety of extremely usable, no-compromise tones which retain the high-quality character of the pedal throughout.

“You have to get it to explode and bloom,” says the Fuzz Bender’s creator, Robert Keeley, of the ideal fuzz sound. That is exactly what he’s achieved here.

Pearl Jam cancels remaining North American tour dates due to COVID-19: “We have truly done all that we could have to remain clear of...