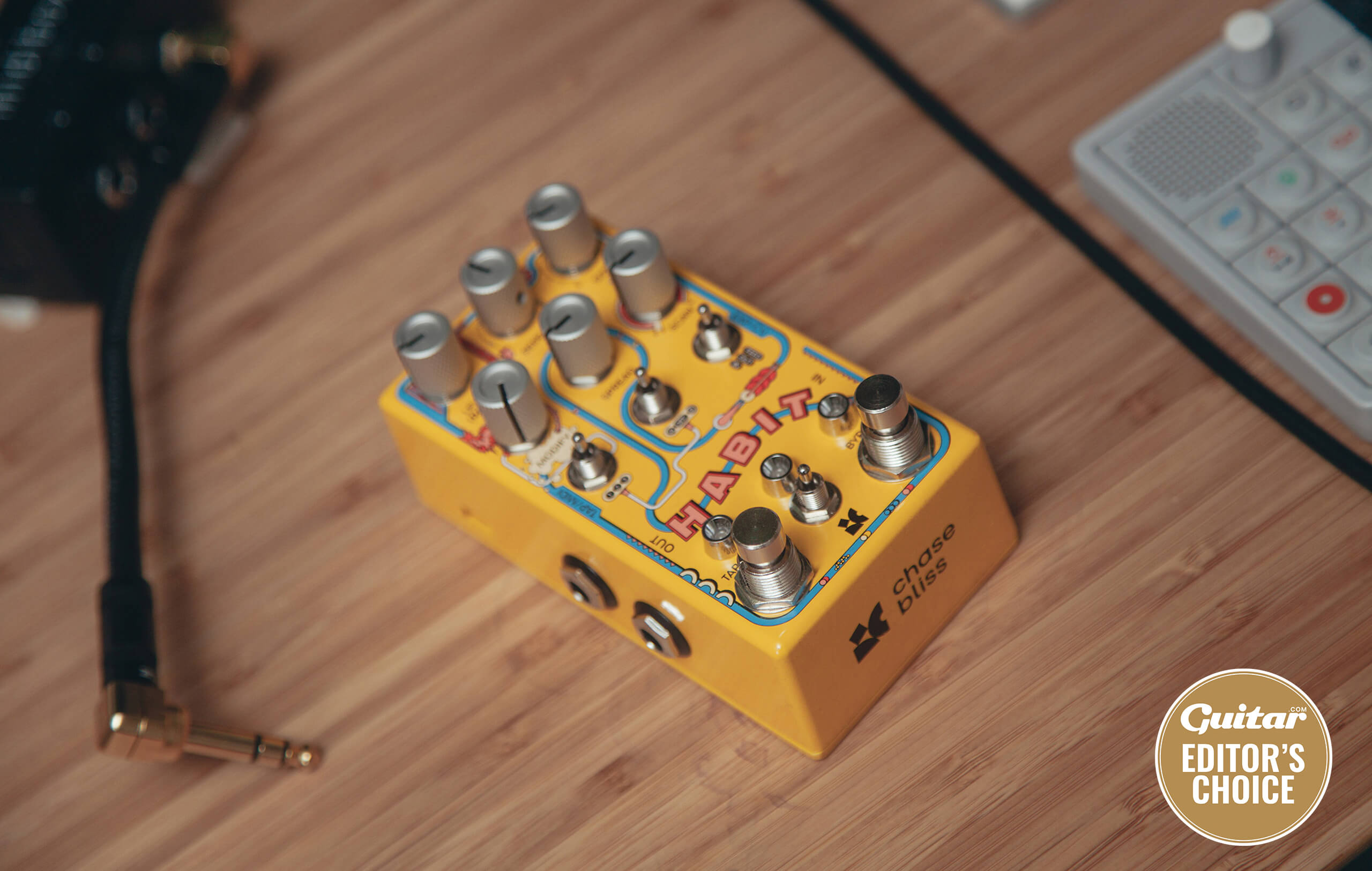 The Big Review: Chase Bliss Habit Echo Collector – is this the most creatively glitchy delay pedal ever?

Chase Bliss specialises in compact pedals with lots of knobs and switches, and this anarchic digital delay is its most ambitious sound manipulator yet.

This many-layered gadget begins as a simple enough delay but then shakes things up with all kinds of glitchy modulation, synthesis and randomised looping. Should you be excited or scared? Probably a bit of both.

Chase Bliss has done wibbly-warbly oddness before. But while this playful-looking yellow box shares some DNA with the Blooper and Mood pedals, it ventures a lot further in the direction of autonomous noise-mangling than those units.

At least part of that is down to Scott Harper, the man behind the quirky Knobs channel on YouTube, who collaborated on the Blooper but is now Chase Bliss’s full-time director of product development. And he’s not there to make Tube Screamers. 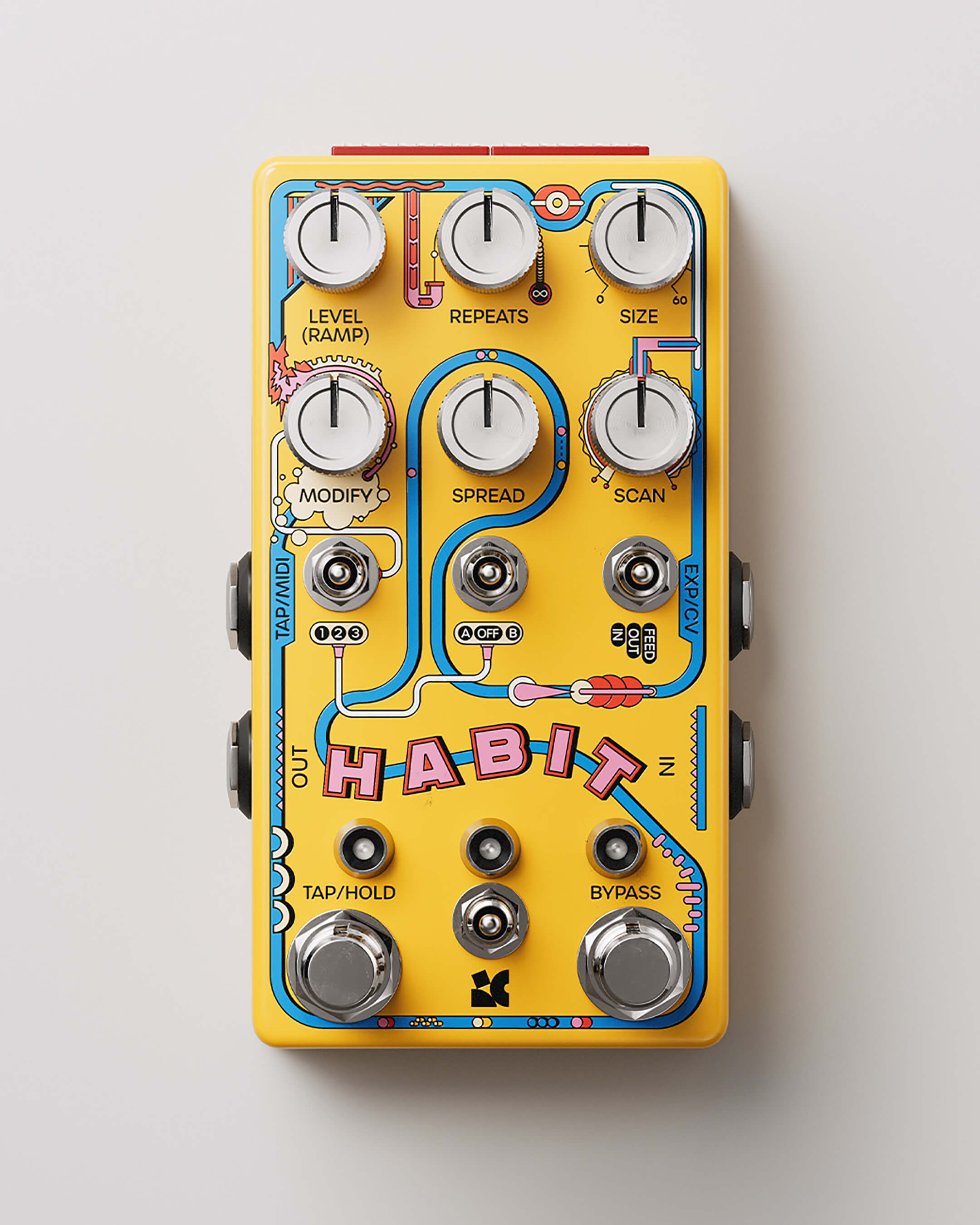 That’s not to say the Habit can’t do the straightforward stuff. The three dials along the top act just as they do on any delay pedal, offering everything from subtle background echoes to eternal repeats (but not uncontrollable self-oscillation). It’s only on the second row of controls that you’ll run into real mischief. ‘Modify’ lets you adjust any one of six sound-mutating modes selected via the two toggle switches below it, while ‘spread’ and ‘scan’ let you bring back snippets of sound from anywhere in the pedal’s always-recording three-minute memory.

Another toggle switch alters the internal routing so that the repeats are modified just once or cumulatively, or are fed back into the memory for extra-zany looping.

Further control comes via a row of 16 dip-switches along the back – half of them for choosing which parameters will be affected by an expression pedal, the other half offering yet more sonic customisation.

It’s potentially quite bewildering… but there’s one more feature that could come in handy with navigation, and it’s nestling between the bypass and tap-tempo footswitches: a preset switch. With this set to the centre you’re in standard manual mode, but one of two presets can be recalled simply by flipping it left or right. Here’s where to store your wildest glitchscape settings, for fear of never being able to find them again. 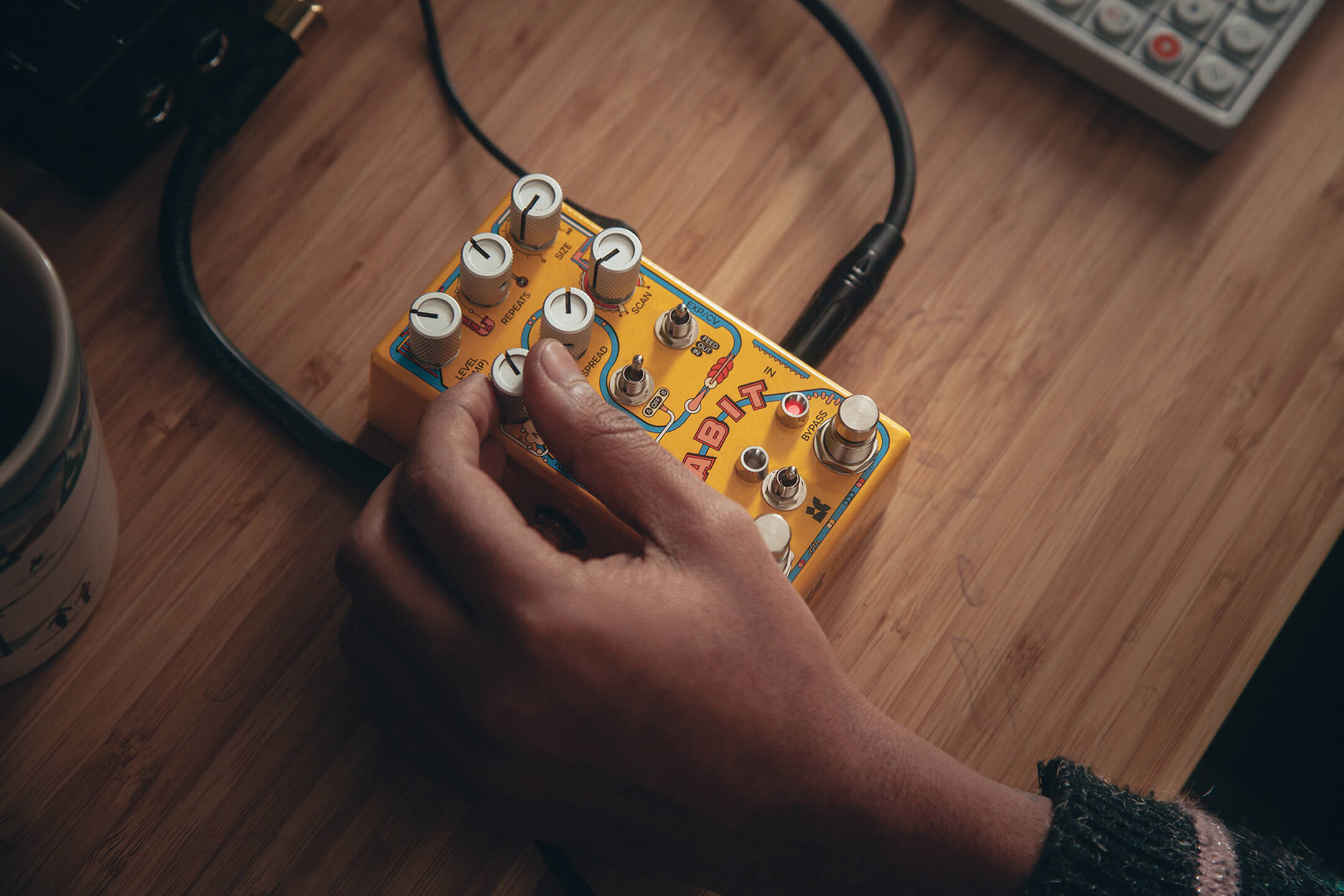 If you’re disturbed by the idea of a pedal that might be a better musician than you, don’t panic. You can produce a lot of perfectly tame and pleasant delay sounds with this thing, and that’s really just a matter of starting with the ‘spread’ and ‘scan’ dials at zero.

As long as the three toggle switches are centred and the dip-switches are all in the off position, you’ll have a basic digital delay with three knobs: delay level, repeats (feedback) and size (time). At normal settings, the noisefloor is low and the repeats are clean. Now let’s explore the six modified modes.

A1 is ‘stepped speed’, which sets the repeats fluttering off skywards in fifths and octaves, going higher and faster as you push the mod control further round – and reversing them when you turn it left of 12 o’clock. This can be magically pretty; just make sure the routing switch is set to ‘in’ or ‘feed’ for cascading intervals rather than a single pitch-shift.

A2 is called ‘stability’ and this is the simplest of the bunch. To the left of noon, it adds woozy modulation in classic Memory Man style; to the right, it does the same thing but with lashings of added background hiss. Well, if you want the authentic analogue delay experience… 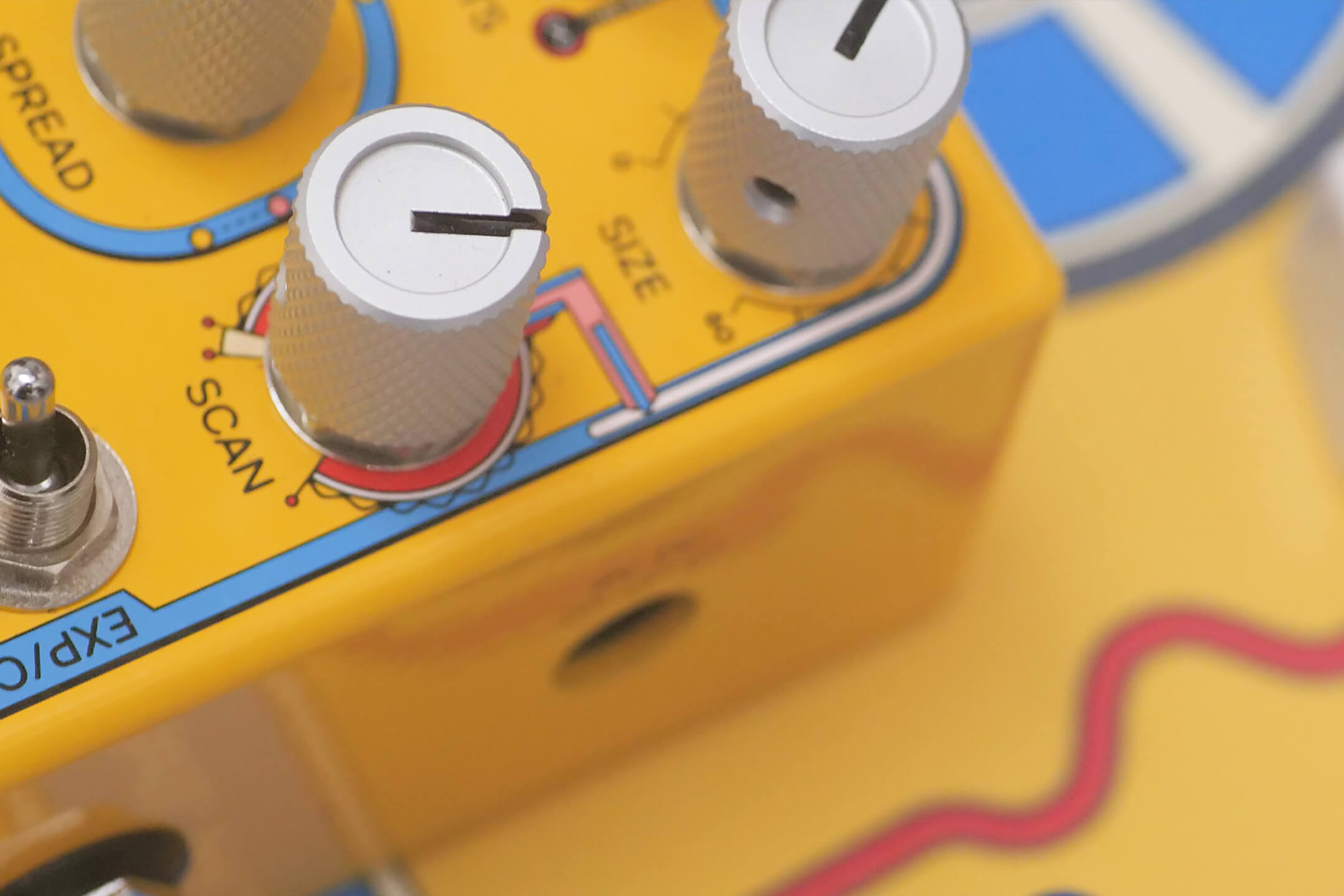 Things get more challenging with A3, AKA ‘trimmer’ mode, where the repeats are snipped off to make them strangely stuttery, while B1 is another pitch-shifting option that’s good for recreating the sound of a demonically possessed fairground with the help of an expression pedal.

That just leaves the extreme tone-filtering of B2 – low-pass to the left, high-pass to the right – and the juddery tremolo effects of B3, which can be either regular or randomised.

All very nice but isn’t it time we garbled things up? The easiest way to do this is to dial in some ‘spread’. On the first part of the dial, this introduces a second delay, which you can tweak to be in or out of time with the main repeats; push it past 11 o’clock, though, and now the Habit starts flipping through its sample banks.

We’d be lying if we said we totally understood everything that’s going on inside the pedal from this point. The same is probably true of the people who designed it. But if you’re prepared to embrace the random, that doesn’t have to be a problem.

In theory, the dip-switch marked ‘manual’ lets you select which part of your past three minutes’ playing to summon. But it doesn’t work quite as predictably as that suggests. Little chunks of music skitter in and out of the picture, sometimes allowing you to blend them with what you’re playing now, sometimes presenting something of an atonal challenge. It’s all part of the fun, and can open the door to a host of spontaneous creative explorations.

Automatic scanning means giving up more control to the whims of the pedal; the tricky part here is balancing the spewings of the memory with your current playing. The tap-tempo footswitch can come in handy with this, as holding it down maxes out the scan knob, so you can call up a few seconds of discombobulation then snap out of it simply by lifting your foot off the gas.

We had a riotously good time with the Habit. But should everybody buy one? Lawks a lordy, no. 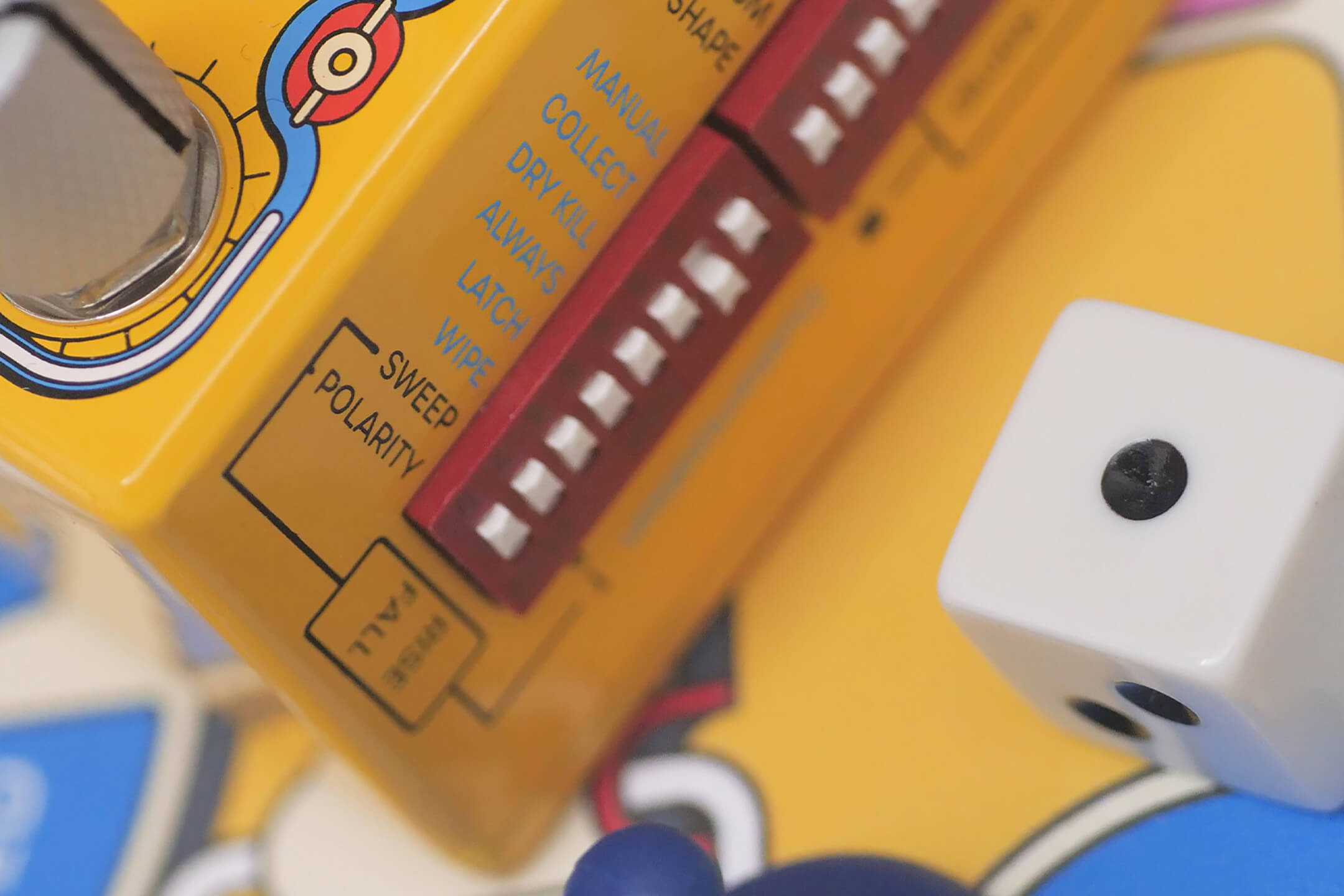 Quite aside from the heavy-duty price and the fact that it can be maddening at times, this is a particular kind of pedal for a particular kind of glitchy music-making. It positively encourages aimless noodling – you need at least three minutes of the stuff to make full use of that randomly regurgitating memory – and, in the wrong hands, this could lead to whole gigs and albums that sound like hour-long Knobs demos.

But as long as you use it as a part-time aid to creativity rather than a replacement for it, the Habit could prove a radical way of helping you to chase your own bliss. 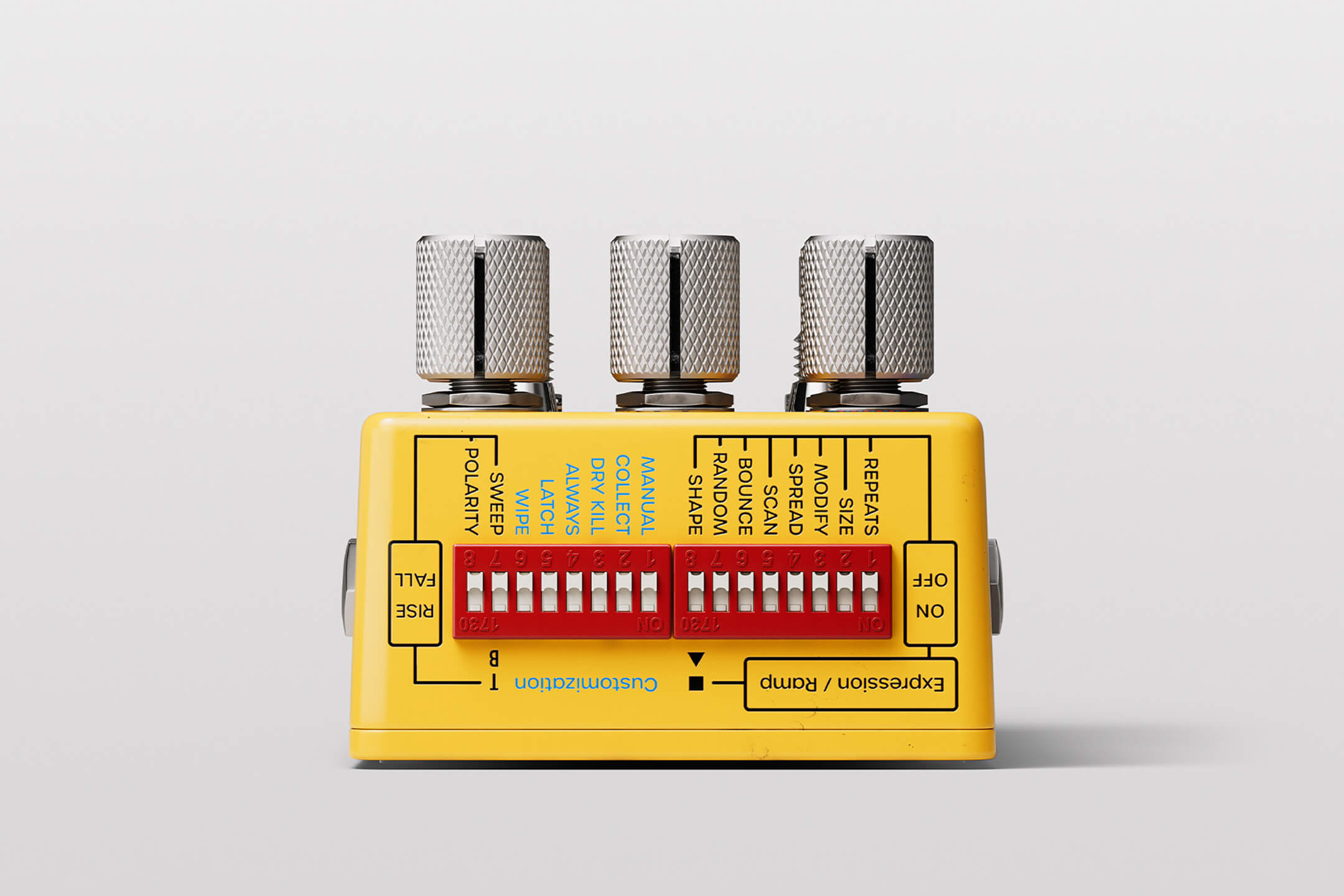