The Maryland company’s retro-inspired Mira and Starla models arrive in their most affordable incarnations yet. Time to take the plunge? 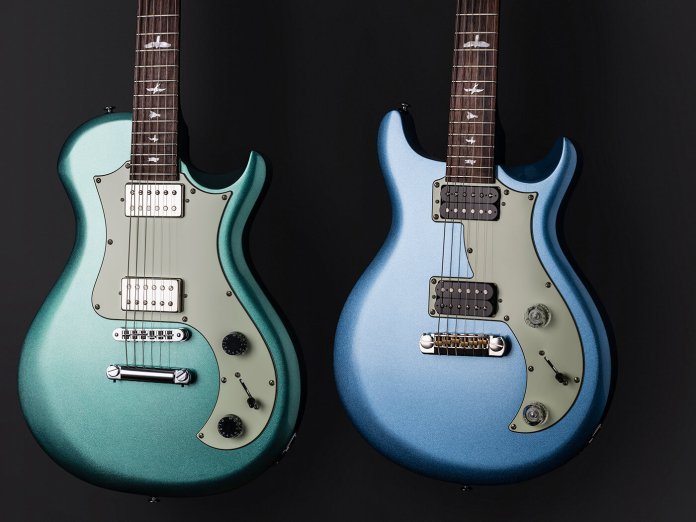 Paul Reed Smith built his reputation on relentless innovation and luxurious electric guitars with breathtaking figured tops. However, the introduction of the Joe Knaggs-designed Mira in 2007 saw PRS apply its considerable guitar-building expertise to instruments with a more stripped-down aesthetic, with the similarly retro Starla following in 2008.

After a year out of production, the models recently moved from the Maryland-built S2 line into the SE section of the PRS catalogue. This means they’re being made outside the US for the first time – in Indonesia – and as a result, they’ve dropped in price to a tempting £599.

Origins aside, the specifications of both guitars remain close to their S2 predecessors, although the Starla has tragically lost its Bigsby tailpiece. If the build quality is up to the brand’s usual standards, however, we could have a couple of wallet-friendly wonders on our hands here. 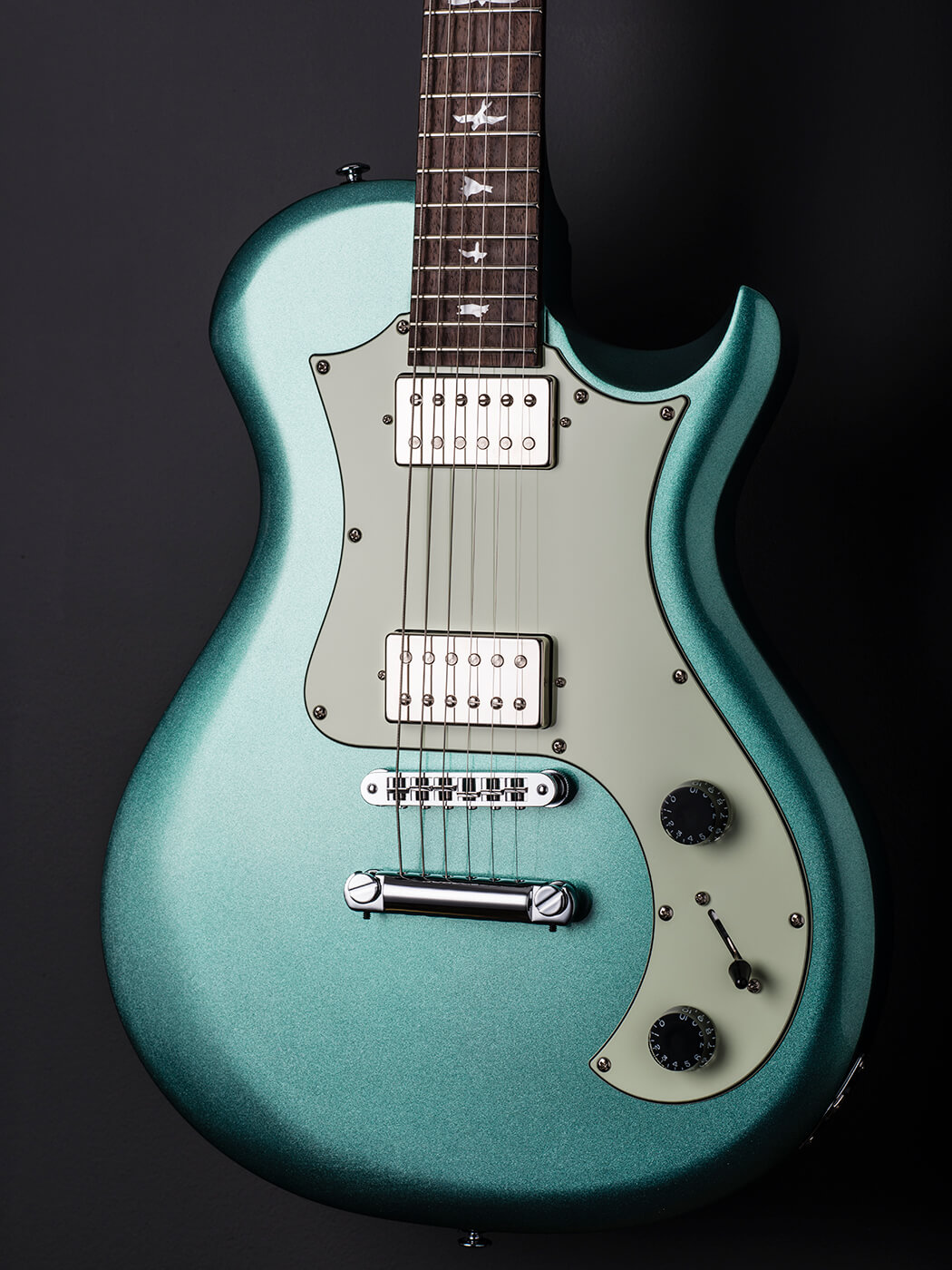 With that Bigsby out of the picture – did we mention how upset we are about that? – the Mira and Starla have more in common than ever. However, there are still enough differences to ensure you have a genuine choice to make between them, beyond selecting your preferred body shape.

First, the similarities: both guitars have mahogany bodies and set necks with rosewood fretboards and PRS’s usual 25-inch scale length. Both have twin humbuckers with a coil-split engaged by pulling up the master tone control. And both offer a zingy metallic colour and a less ostentatious option: for the Mira, it’s the sparkly Frost Blue Metallic seen here or solid black with a tortoiseshell guard; for the Starla, it’s this dreamily aquatic Metallic Green or a classic Antique White, again with a tort guard.

The contrast in shapes is significant: the Starla’s single-cut design means it has a different neck join, which will have an effect on tone, feel, and balance. But perhaps more important than that are the pickups. We’re told the Mira’s 85/15 S humbuckers are all about vintage rock punch, while the Starla’s covered DS-02 ’buckers look a lot like the somewhat Gretsch-flavoured units in Starlas of old. 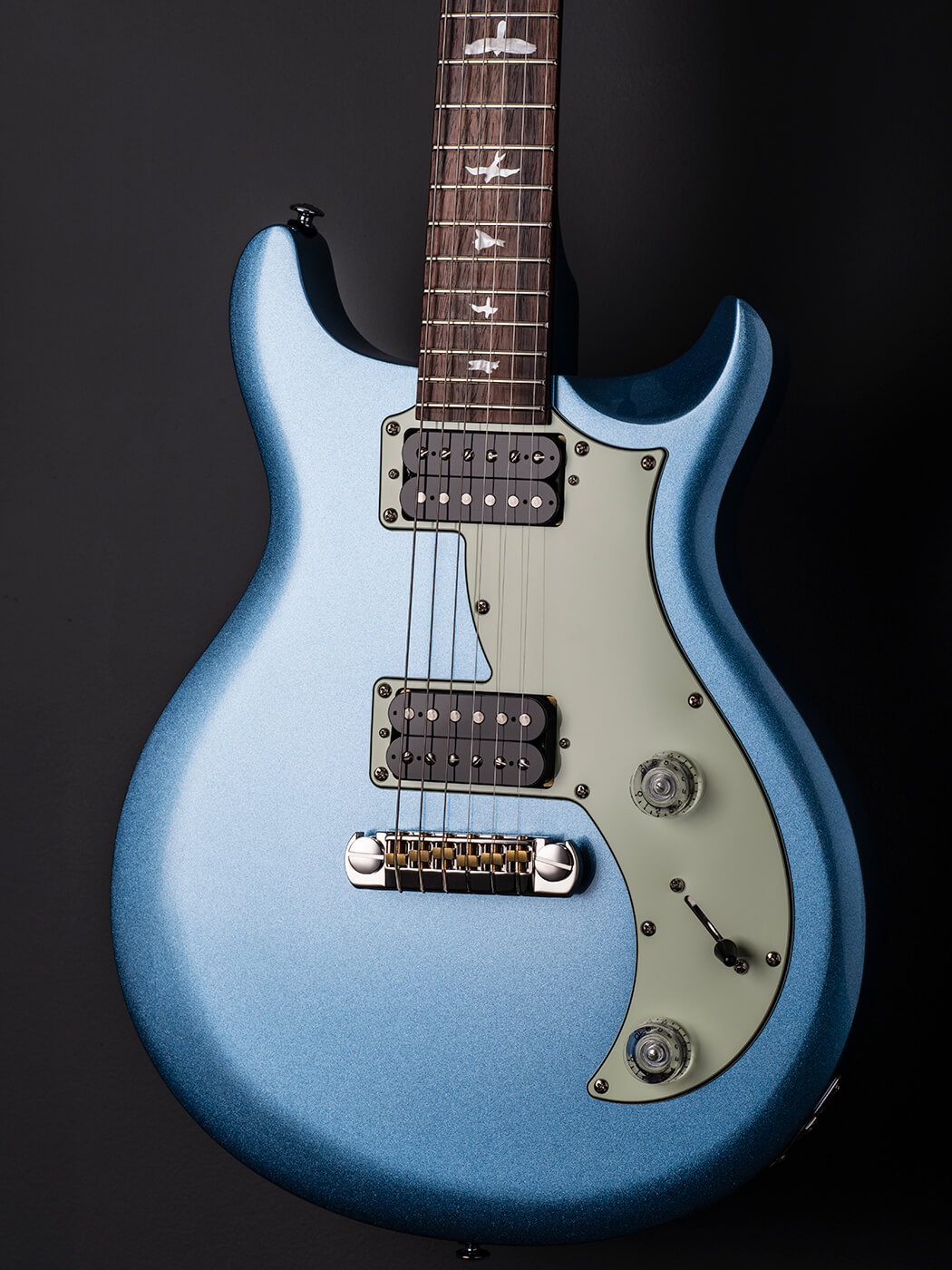 The bridges are different too. The Mira gets a chunky one-piece wraparound with individually adjustable brass saddles, while the Starla trades in the Bigsby (sniff!) for a tune-o-matic and stoptail.

Both fretboards have a 10-inch radius and the familiar bird inlays but the necks themselves differ: the Mira’s profile is Wide Thin, the Starla’s Wide Fat. While both necks have the width to allow plenty of space for chubby fingers, the Starla’s is 1.5mm deeper at the first fret. It might not seem like a lot but it definitely feels it.

Does the attention to detail live up to USA S2 standards? Not quite. The button of our Starla’s low-E tuner only misses the side of the headstock by about a millimetre – which isn’t technically a flaw but is hardly reassuring – and, more seriously, our Mira’s pickup switch starts playing up after a few days of use.

The most important aspect of an instrument’s build quality is surely how it affects playability – and that’s where PRS has clearly been focusing its attention; both guitars are as easy to get stuck in to as a bowl of hot pasta. Which neck profile you prefer is of course down to personal taste, but each feels slick in its own way, with tidy fretting and low factory actions.

Our Mira is exceptionally light, which may or may not explain why its acoustic tone is so downright loud. It’s more about honky mids than zingy treble, though, and that remains the case when we plug in. The DC readings don’t suggest especially hot pickups but these humbuckers belt it out way louder than the PAF types in our reference Les Paul.

There’s loads of upper-midrange snarl on the bridge pickup, making this a sensible choice for staccato rock riffing and big lead lines with that classic PRS clarity. The downside is that, while the neck pickup also presents an impressively full frequency range, there’s not a lot of clucky sweetness in the middle position – at least, not until we pull out that tone knob.

Inevitably, you lose some lower-midrange fullness in single-coil mode but what you get in its place is a striking amount of phasey quack – not as much as a Stratocaster in one of its in-between settings but not far off. Strangely enough, that’s true even with only a single pickup selected.

That’s a triple bonus of top-class Strat-style sounds to choose from, then, and their close equivalents are also available from the Starla. In fact, pretty much everything the single-cut model does echoes the qualities of its sibling, only with a slightly smoother, less cutting voice.

That makes the Starla less of a natural rock model than the Mira but it responds better to gentle playing and some might find it a more expressive guitar. It has a little bit of Gretsch twang too. If only there were some way to accentuate that with downward note bends, perhaps by pushing down on a metal bar of some kind? Hmm.

The tonal differences between the Mira and Starla are not substantial. If we had to choose a favourite, we’d be thinking more about neck profiles than anything sonic. What’s beyond debate, though, is that they’re both technically fine guitars. PRS guitars for people who don’t think they like PRS guitars? If you’ve always had a secret yearning for one of the brand’s cheekier models, now might be a good time to indulge it.